‘Friends of the MJA’ call for reversal of AMPCo decisions to sack editor, outsource to Elsevier

A Friends of the MJA group has been set up to protest the recent decision by the Australian Medical Publishing Company (AMPCo) to sack the Medical Journal of Australia’s editor-in-chief Professor Stephen Leeder and outsource production and sub-editing to global publishing giant Elsevier.

The group’s Steering Committee is calling for:

It said in a statement:

“The Steering Committee believes that the decisions taken by the Chairman and Board of AMPCo have been ill-judged, and are not in the best interests of Australia’s premier medical journal nor the wider medical profession.

“In reaching this view, the Steering Committee of Friends of the MJA was highly critical of AMPCo’s due diligence of Elsevier’s record, its obvious lack of knowledge of medical publishing, its insufficient attention to detailed submissions from its own senior staff and the abrupt and disrespectful dismissal of an Editor-in-Chief who had led the readily visible improvements made to the MJA over the last 18 months.”

AMPCo is a wholly owned subsidiary of the Australian Medical Association, which has fully backed its decisions regarding the MJA. It will be interesting to see whether the issues and the future of the MJA come up for discussion at the AMA’s annual conference in Brisbane next weekend. Critics of the decisions have spoken of cancelling their subscriptions and withdrawing editorial support as referees.

The Friends of the MJA group has been joined and backed by senior medical academics, including Professor Bruce Robinson, Dean of the Sydney Medical School at the University of Sydney, who wrote to colleagues this week to alert them to the MJA developments:

“I strongly urge you to become a ‘Friend of the MJA’ in support of Professor Leeder and the independence of the MJA,” he said in an email that was shared with Croakey.

Specialist physician Dr Kerry Breen, convenor of the Friends of the MJA, said the founding members of the group had been “overwhelmed by emails expressing astonishment and dismay at the actions of AMPCo”.

Breen, who is Adjunct Professor in the Department of Forensic Medicine at Monash University, said the MJA is the most widely read medical publication in Australia, distributed to more than 30,000 readers. “In the brief two years of his editorship, Professor Leeder has improved its quality and influence enormously,” he said.

Breen said the Friends of the MJA‘s website (www.friendsofmja.net.au ) aimed to fully inform readers of the background to the controversy and invite them to register as Friends and/or express their views. “We encourage all MJA readers to visit the website and make up their own minds.”

The site includes background to ethical concerns held by Leeder and other leading health academics about Elsevier, which was found to have put out six publications between 2000 and 2005 that were sponsored by unnamed pharmaceutical companies and looked like peer reviewed medical journals, but did not disclose sponsorship. See some of the comments left on the website so far: 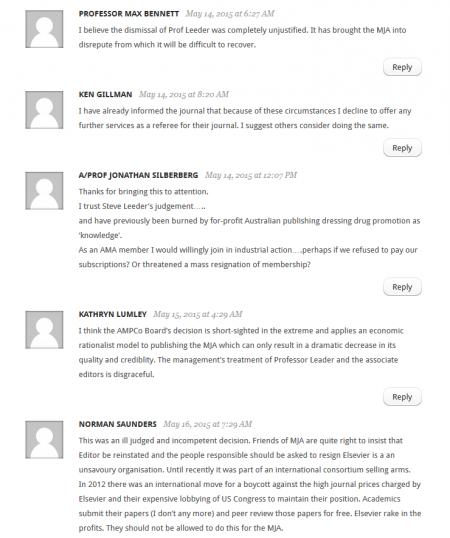 It also includes the submission sent by Leeder in February 2015 to the AMPCo Board, outlining his concerns about the outsourcing proposal, including:

I have grave concerns that outsourcing the Journal will have deleterious effects on our readers and especially on all those colleagues who willingly donate their time to reviewing articles, focusing our attention on specifically Australian issues (such as Aboriginal ill-health and the problems of delivering health care to remote areas), contributing points of view, writing book reviews, volunteering statistical analyses etc.

While these colleagues can be relied upon to donate their time and effort to a journal in which they feel a sense of ownership, I very much doubt that they would wish to be so generous in assisting a profit-seeking enterprise to improve its shareholders’ dividends.

The Journal has achieved world-wide recognition as the voice of Australian medicine and research. This status can be preserved only if control of the Journal remains solely in Australian hands. Once ownership passes to an international organisation, no matter how prestigious, the MJA would have to fit in with that company’s overall international planning. Indeed, that company could decide, at some time, that the Journal was not sufficiently profitable – and could scrap it.

It would be well-nigh impossible for the AMA to then start a new journal – something which the Elsevier contract might not, in fact, permit.

I cannot overemphasis the importance of keeping the MJA in the hands of AMPCo, and under the overall control of the AMA. Once lost to Elsevier, it could never be regained.

All but three of the 22 members of the MJA’s Editorial Advisory Committee quit their positions earlier this month when they learnt of Leeder’s dismissal and the reasons around it.

The MJA’s deputy editor Dr Tania Janusic also has resigned and medical editor of MJAInsight publication Ruth Armstrong has given notice over the decisions.

Croakey today asked for details from AMPCo about replacing Professor Leeder and the Editorial Advisory Committee members. We will update this post with additional information as it arrives.

Why Australia needs a national strategy to tackle misinformation