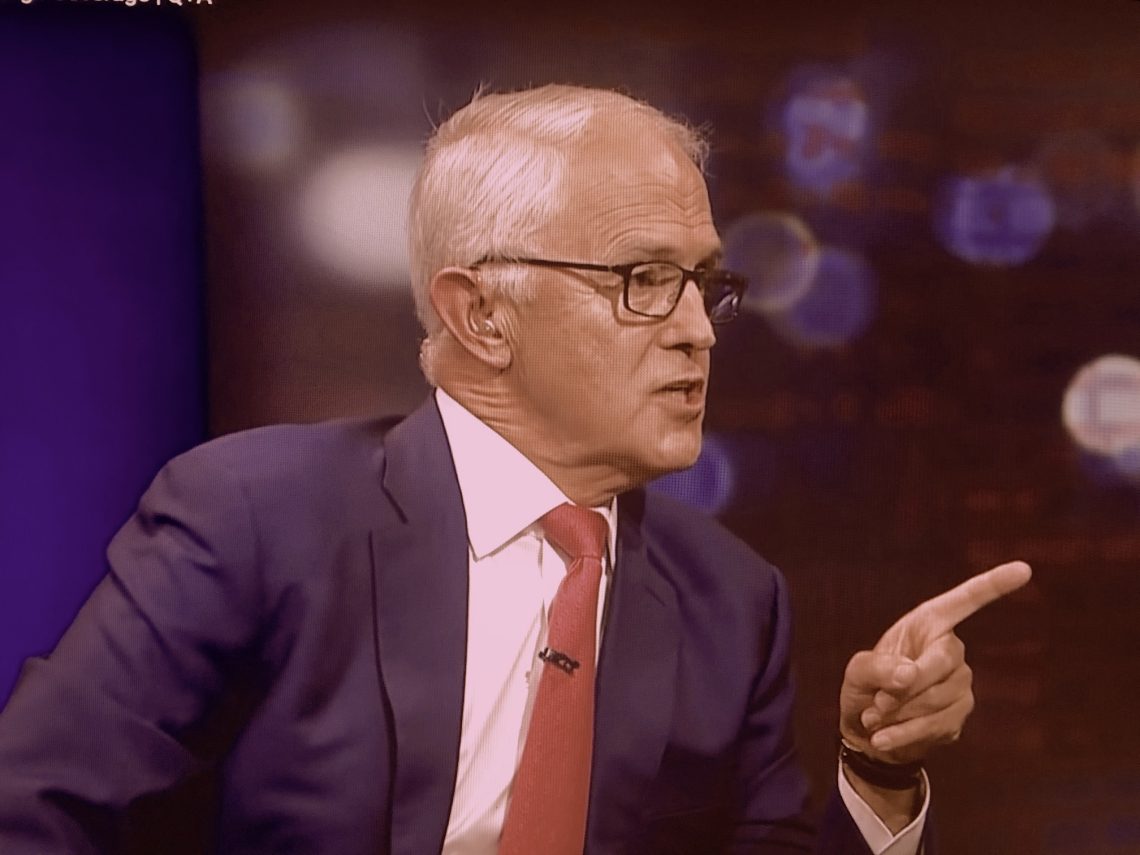 From climate change to COVID, the media crisis is a health hazard. Here are some opportunities for change

Croakey readers are encouraged to engage with a Senate inquiry into the state of media diversity, independence and reliability in Australia and the impact this has on public interest journalism and democracy. Submissions close 12 December.

As Marie McInerney reports below, momentum is building to address the crisis in public interest journalism and related issues such as the proliferation of misinformation and disinformation.

The Australian Senate is set to investigate the lack of media diversity in Australia and its impact on public interest journalism and democracy, in the wake of a call by former Prime Minister Kevin Rudd – backed by more than half a million Australians – for a Royal Commission on the issue.

The Media, Entertainment & Arts Alliance welcomed the inquiry, saying the media landscape in Australia is suffering from a narrow ownership base, a crisis of integrity with the public, a weak regulatory environment and “heightened hyper-partisanship” which is eroding public confidence in journalism.

The inquiry by the Senate Environment and Communications References Committee, launched and to be led by Greens Senator Sarah Hanson-Young, will take submissions until 11 December (NB: this date was corrected after publication due to a previous error) and report by 31 March 2021.

The Senate committee is expected to call Rudd, who says the inquiry is a good first step ahead of a Royal Commission, and also former Prime Minister Malcolm Turnbull.

Its campaign on “climate denial is just staggering and has done enormous damage to the world, to the global need to address global warming,” Turnbull said in an exchange that’s been watched by millions of people and retweeted by leading US journalism academic Professor Jay Rosen.

As we have with previous inquiries, Croakey urges health and social sector organisations and professionals and the wider community to engage with the inquiry and consider making submissions. Here’s an important investigation, reported by the beleaguered ABC, that might be useful, on preferential treatment for Foxtel.

COVID-19 and bushfires drivers for change

The MEAA points out that many of the issues to be raised by the inquiry have been examined by parliamentary and other inquiries in recent years. For varying reasons, these have failed to deliver serious solutions to the crisis in public interest journalism.

Meanwhile, all eyes remain on the Australian Government’s plans for a mandatory code governing commercial relations between digital platforms and media companies, which many media organisations are hoping will add to their revenue (See Croakey submissions on the code from 28 August and 5 June).

A spokeperson for the Treasury told Croakey that legislation to give effect to the Code will be released by the end of the year, and said: “This is an important reform that will ensure strengthen competition and improve the sustainability of the Australian media landscape.”

But the MEAA says the changing circumstances forced by the COVID-19 pandemic, the dramatic decline in media revenues, the impact of social media platforms, and the challenges of reporting regional issues such as the recent bushfires, demand a fresh look at the challenges facing the media industry.

“There is great disquiet in the community about the state of our media which has been heightened by the reliance on accurate and independent public interest journalism during the bushfires and COVID-19,” said MEAA Media Federal President Marcus Strom.

“At present we are suffering a narrow ownership base, a crisis of integrity with the public and a weak regulatory environment.

“This has produced immense workplace stress on our members who are dedicated to reporting news in the public interest.

“Alongside this is a heightened hyperpartisanship that is undermining public confidence in journalism.”

Announcing the inquiry, Hanson-Young said it was clear from the half a million signatures on the record-breaking petition launched by Rudd for a Royal Commission into media diversity “that Australians are very concerned about the concentration of media ownership and the power and political influence of Murdoch”.

“We are losing the diversity of media voices across the country and access to news and public interest journalism in some regions altogether,” she said, adding that the loss of media outlets and the increasing pressure faced by small and independent publishers “is bad for our democracy”.

“The dominance of Facebook and Google has been ever increasing and this inquiry will also provide an opportunity for a proper consideration of how that is impacting media diversity.

“The US election has highlighted the need for truth in journalism and the need to call out unsubstantiated and false claims. Before we head into another election period in Australia we can now take a proper look at the state of media diversity here and help protect a pillar of our democracy.”

Meanwhile, Kevin Rudd today said he would be consulting lawyers over News Corp’s attacks on his integrity following his calls for a Royal Commission. 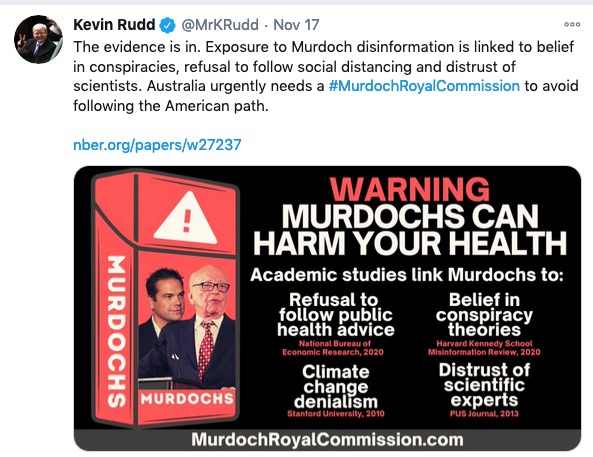 The paper cited in the tweet above is here.

Efforts to address disinformation in the Australian media are also underway – but again raising concerns over whether or not the big digital platforms like Google and Facebook can be trusted to regulate themselves.

The Australian Government last year asked the digital industry to develop a code of practice on how digital products and services would address disinformation.

A draft Australian Code of Practice on Disinformation has now been released for public consultation, developed by the Digital Industry Group Inc, an industry association that counts Google, Facebook, Twitter and Verizon Media as its founding members, with Redbubble, eBay, GoFundMe and Change.org among its associate members.

You can also read this UTS Centre for Media Transition background paper on the draft code.

The Australian Communications and Media Authority (ACMA), which is overseeing the development of the code, has yet to comment formally on the draft.

But ACMA Nerida O’Loughlin made clear its disappointment in a comment to the Sydney Morning Herald last month, saying the draft code released for public consultation by DIGI “is a long way from the model that we proposed to address these important issues”.

The SMH reported that, under the proposed model, a tech company would agree to measures to address the ACMA’s concerns, which are based on the risk of harm to a user, as well as how they will report back on their attempts to meet these measures.

“But the draft code does not provide the specific measures. Instead, it outlines examples such as flagging or demoting content and stopping receiving revenue on ads based on disinformation,” it said.

The disinformation code arose from recommendations 14 & 15 of the Digital Platforms inquiry roadmap. Submissions on the draft code are due by Tuesday 24 November 2020.

The MEAA’s union’s annual report said COVID-19 has “wreaked havoc and destruction” through the arts, entertainment and media industries, with more than 100 regional, rural and community mastheads ceasing operations and cut backs at television and radio stations around the country as advertising revenues have plummeted.

They appeal to people to:

“Ask if they are aware that media regulations are seriously disadvantaging local news media.

Ask if they want their local newspaper, television or radio news bulletin to disappear on their watch.

Ask if they are prepared to sit idly by while the real voices of our communities wither and die”.

But their campaign, fronted by TV journalist Ray Martin, is also calling for changes to media ownership laws which, as the Canberra Times reported recently, could further “threaten diversity of voices across regional Australia” and the holistic reform needed for the industry.

Australian Community Media (ACM) executive chairman Antony Catalano is insisting that regional media outlets “need the freedom to structure our businesses efficiently so we can achieve the scale necessary to compete with the unregulated digital services of metropolitan media and global internet giants”.

Croakey reported early this year that the pandemic was cutting a swathe through Australia’s media, with hundreds of newspapers suspended or closed at the start of the pandemic, and regional television news bulletins cancelled.

“Some of the publications and services have returned, but not fully, and others have been shuttered permanently, while smaller independent players have also popped up around the country,” the Canberra Times said last month, pointing readers to the Public Interest Journalism Foundation’s Australian Newsroom Mapping Project which is tracking the fate of Australian media.

COVID-19’s also had a major, though varying impact on the media globally, examined in this important report published recently by the Reuters Institute and Oxford University, titled: Few winners, many losers: the COVID-19 pandemic’s dramatic and unequal impact on independent news media.

The Reuters/Oxford University report on the impact of COVID-19 and media globally provides an analysis of 165 responses to a survey of independent news media organisations on how the COVID-19 pandemic has impacted them, combined with interviews and case studies.

It says the pandemic has provided a powerful reminder of how central news organisations are to helping people stay informed in difficult and uncertain times and illustrated the role professional journalists play in “holding governments and others to account for how they handle the crisis and sometimes try to mislead the public about what they are and are not doing”.

“But the crisis has also impacted independent news media, with some governments using the pandemic as an excuse for further crackdowns on journalists…and with the consequences of the economic downturn leading some to fear a ‘media extinction event’,” it said.

PrevPreviousCOVID-19 wrap: how can we improve quarantine safety?
NextAs South Australia grapples with COVID cluster, some lessons from SheppartonNext