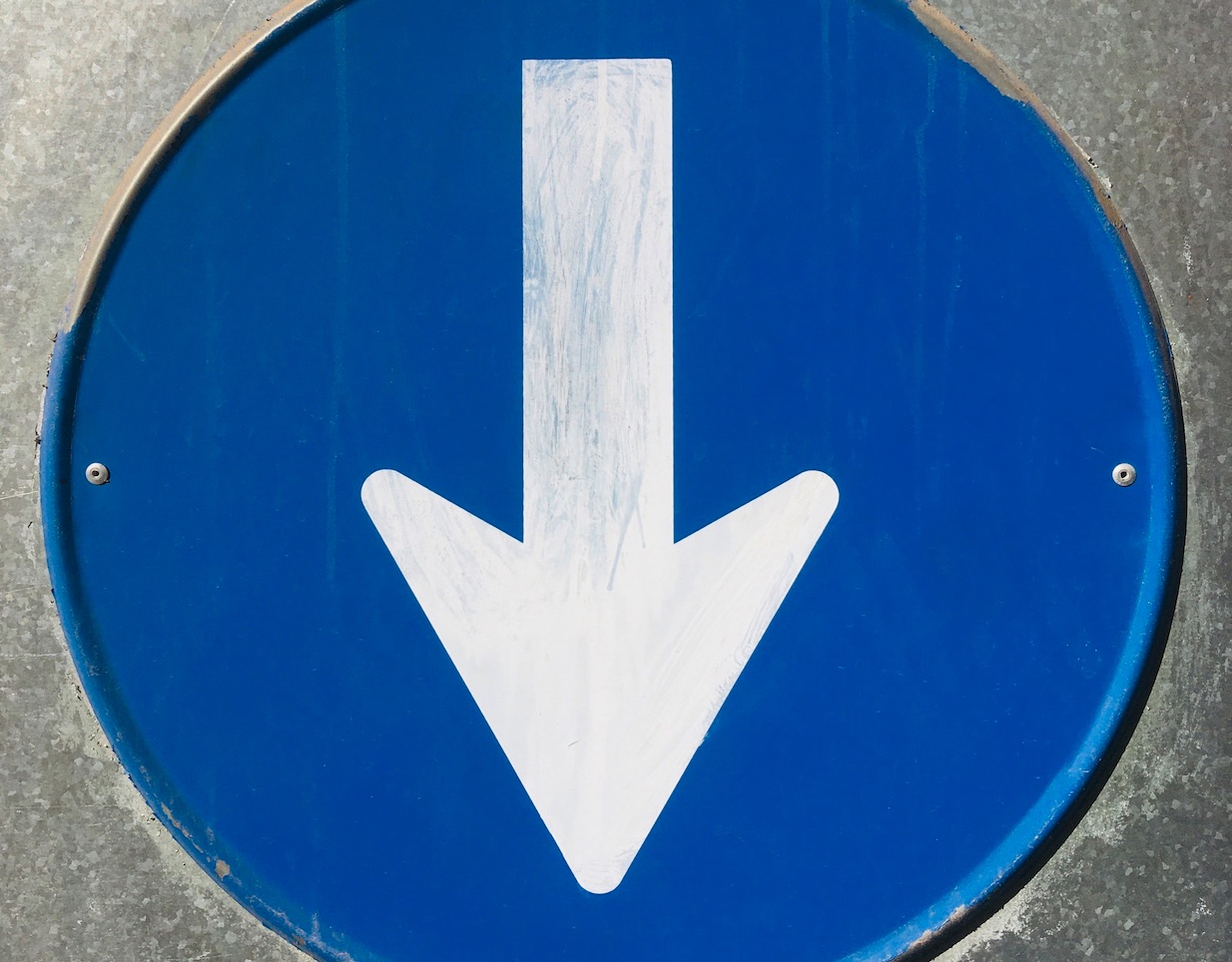 Reducing the world's population is critical for health. Photo by David Pisnoy on Unsplash

From eight billion to four billion – how to save our planet

The world’s population is expected to reach eight billion today, according to United Nations projections.

With the COP27 meeting now underway in Egypt, it’s time for an urgent conversation about how to reduce the world’s population, writes Jeffrey Braithwaite, Professor of Health Systems Research at Macquarie University and Founding Director of the Australian Institute of Health Innovation.

I’m not sugar-coating this anymore. The Earth is entering its end stage. It can no longer stay ahead of the risks humans have exposed it to since the industrial revolution. Take in your daily news feed, and you will conclude we’re in serious trouble. It’s much worse than that. Time’s up.

As an optimist by nature, it pains me to write this.

Talk all you like about the war in Ukraine and its devastating, destabilising effect not just on Ukrainians (it’s a death warrant for many, Mr Putin, especially your own young conscripts) but the world order. Or you might point to inflation and energy prices as your personal fiscal nightmare. Or maybe your own frustration is the troublesome politics and endemic disagreements in democracies. Or you could express disbelief in the preponderance of takeovers by authoritarian regimes in too many countries to mention.

Throw in Brexit, the COVID-19 pandemic, ageing populations and world indebtedness, and every thinking person is – as everyone indeed should be – justifiably over-wrought. It amounts to an assault on our mental health.

In research undertook by my team last year, almost a quarter (23.6 percent) of Australians reported serious levels of psychological distress. The rest of us have intermittent, and many of us constant, feelings of sadness, nervousness, restlessness, and worthlessness.

That’s in a wealthy, functioning democracy. The lucky country.

Yet all those things, as scary as they are, are not the biggest challenge. The real existential problem is human-induced climate change.

(My own plea by the way, is that we should reject any more diplomatic language, and call it what is. Let’s cease using the innocuous phrase climate change and talk about rapidly rising planetary temperatures: global heating. Politicians might obfuscate, but the science does not lie.)

There are lots of words written and spoken in articles, via social media and at conferences about what to do. Things like adaptation. Or mitigation.

But these are weasel words. Greta Thunberg’s “blah blah blah”. In sentences that give the utterer of them cover for the horror. An apologist’s nod to their fossil fuel mates. Comfort for the masses.

We need nothing short of a profound shift with all the effort we can muster to sustainable energy sources, and as we do so, learn to live with a hotter world. Taking absolute personal responsibility for one’s carbon footprint is good, but just isn’t enough. Not if we want to electrify the grid and go full-on renewables.

We are quite simply not reacting rapidly enough. Not by a long chalk. So Gaia is dying. We are already 1.2 degrees hotter than we want the world to be. Species are becoming extinct. De-forestation is rampant. The oceans are overfished. Glaciers are disappearing. Polar icecaps are retreating.

But in the context of the United Nations’ announcement that the global population will reach eight billion on 15 November 2022, a key causal factor is that we have overpopulated the planet. Here’s a graph I often use in my work. 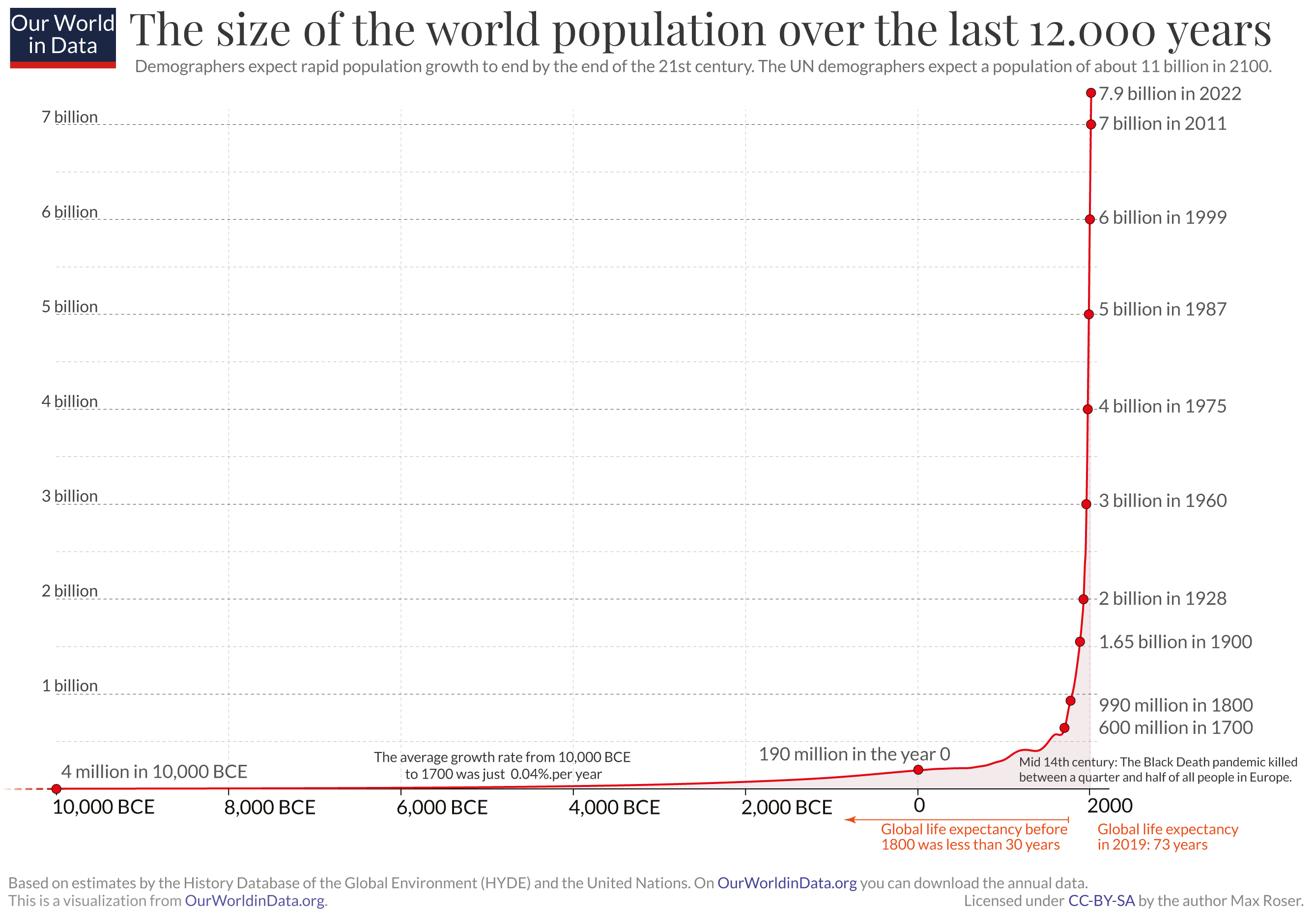 The impact on the climate of this hockey-stick increase in humans is terrifying. Worst of all, the vertical line trajectory has no respite to date.

When can we be confident that we’ve actually arrested the explosive growth in people? When will we see even a hint of a downturn?

This many mouths to feed, clothe and house (not to mention the need of the eight billion to travel, access education, healthcare, and all the other services humans require) means that we need three and a half Earths because the carrying capacity of this one is simply insufficient for all eight billion of us. I’ve done a TED talk on this (watch it here).

That’s now. Today. Yet there are forecasts for more billions of people.

To state the blinding obvious, we only have one Earth. And the effect of this population increase in terms of just one other graph amongst many I could provide – CO2 emissions – is clear. 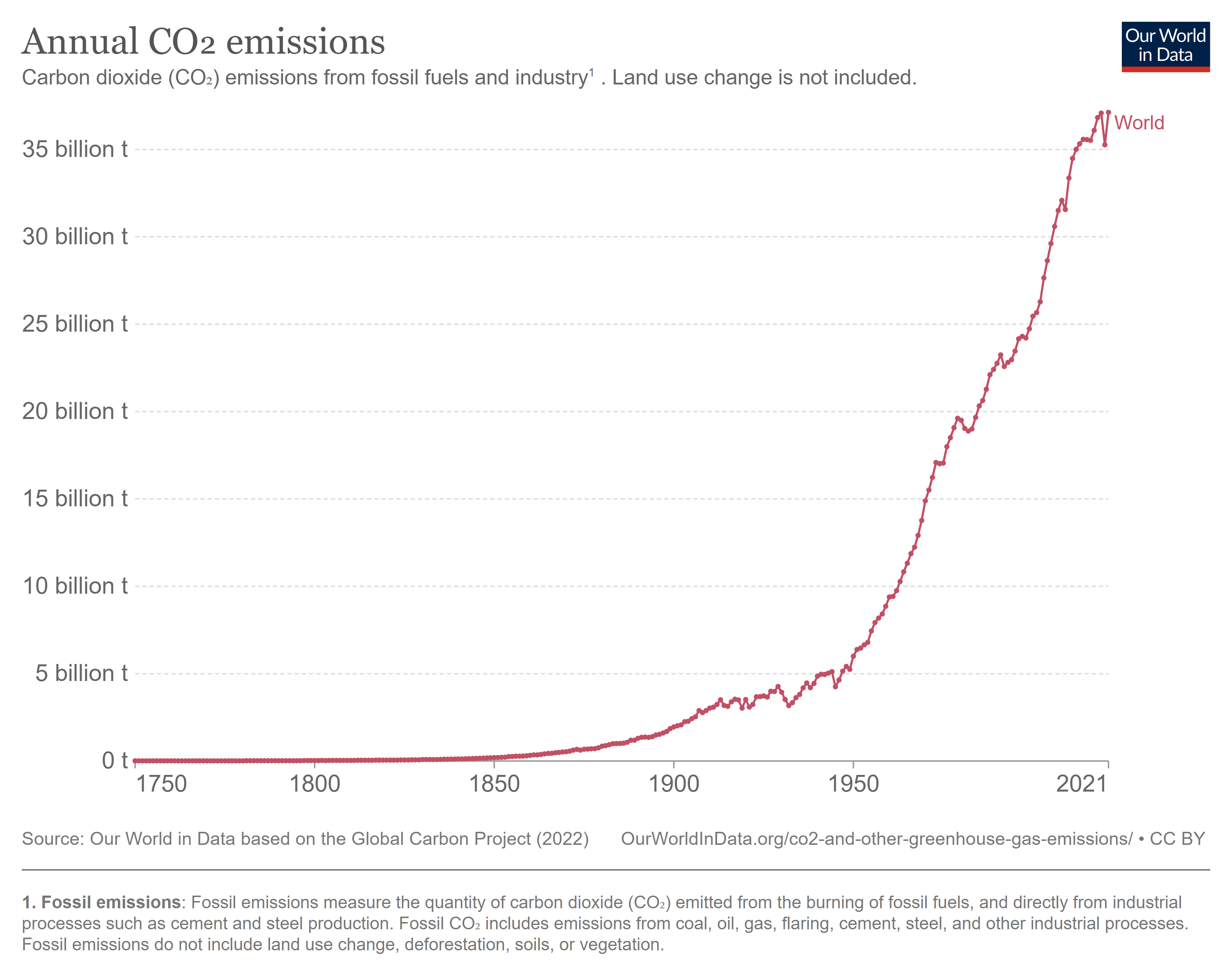 Source: our World in Data: https://ourworldindata.org/grapher/annual-co2-emissions-per-country?country=~OWID_WRL

The correlation between the two curves is so apparent it doesn’t need to be spelled out. More people. More emissions. More environmental pressures. More degradation. More consumption of the world’s resources. Harder and harder problems to solve.

Bloody-minded neglect is what I call it. It’s a real-life rerun of the movie Don’t Look Up.

The obvious thing to do is to really and truly work hard to under-populate the planet in concert with rapid, genuine and sustained de-carbonisation of everything.

Alongside that, we need to get on with the job of reorganising economically, so we provide more equitable access to those remaining resources – more for those one-third of the eight billion of us living on a few dollars a day and less for the wealthy. Start by having fewer billionaires with his and hers private jets, ten houses and twenty cars. Tax them and redistribute the wealth, for goodness’ sake. There is no good argument for not doing this. And put that transfer of wealth into a sustainable framework.

So, let’s not celebrate quite so shrilly the next marvellous business guru who buys a Twitter-like platform or builds a shiny new rocketship. Let’s give all those accolades and more to those who fund the end of malaria or reductions in diarrhoea, or tackle pneumonia in the children of sub-Saharan Africa. Or who give women in poor countries micro-finance to build an enterprise that becomes self-sufficient and feeds their family – creating a circular, ecologically-viable economy.

To help save ourselves from the climate-induced floods, droughts, wildfires, tornadoes, cyclones, rising oceans, storms, poverty and displacement, all of which are wreaking havoc not just on Gaia but on the health of us all, we need to implement what we know we have to do. To not just tackle hotter temperatures but also reduce the sheer number of people on the planet.

A better, more equitable world economy using renewable sources of energy so everyone can enjoy a decent share of the benefits and have a planet, economy and environment that sustains itself. Is this really beyond us?

But we also need fewer people using less of the dwindling resources the world provides us.

How do we do this and in an equitable manner?

It’s no secret that what’s good for the world, and in particular, people living in lower-resource settings, is good for all of us, and would also rein in population pressures.

Amongst the best investments to low- and middle-income settings are education, particularly for women and girls, but population-wide. Because of the positive effects on human well-being and human knowledge, the economic benefits flow through, and further help reduce population growth. Empowering women and girls, including the freedom to choose – to pursue education, a career, and access to reproductive advice and to modern contraception has many benefits and no downsides.

Another initiative to pursue is to provide access to healthcare for all. It’s not just a human right; it improves well-being and reduces child mortality. This is a key point. It might seem counter-intuitive, but enabling healthier children in healthier families reduces the pressure in poorer countries to have a large number of children to ensure some survive.

Shifting the world to sustainable agriculture and plant-based nutritional diets yields big benefits for the cost, helping save the planet, too. Sharing prosperity widely across rich and low-income countries demonstrably increases the supply of human opportunity and capacity.

And more educated, less poor populations are able to design newer solutions to all kinds of social-economic-healthcare related problems, increasing the store of human knowledge and creating momentum to tackle them. Imagine the newly-realised potential that can be generated by levelling up and revitalising populations everywhere.

It’s not that we haven’t been warned about the threat that a rising population poses to us. Professor Paul R. Ehrlich and Anne Ehrlich alerted the world to this more than half a century ago when they published The Population Bomb in 1968. And fully two centuries ago, French physicist Joseph Fourier noted the Earth’s “greenhouse effect”.

We just haven’t been listening. Let’s arrest the curve, and top out at eight billion.

Or be really ambitious and aim for four billion. Doesn’t that sound better than the 11 billion or more some have scarily put forward as a population we can reach?

• Jeffrey Braithwaite is NHMRC Leadership Fellow, Professor of Health Systems Research, Faculty of Medicine, Health and Human Sciences at Macquarie University, Founding Director, Australian Institute of Health Innovation, Director of the Centre for Healthcare Resilience and Implementation Science, and President of the International Society for Quality in Health Care (ISQua). 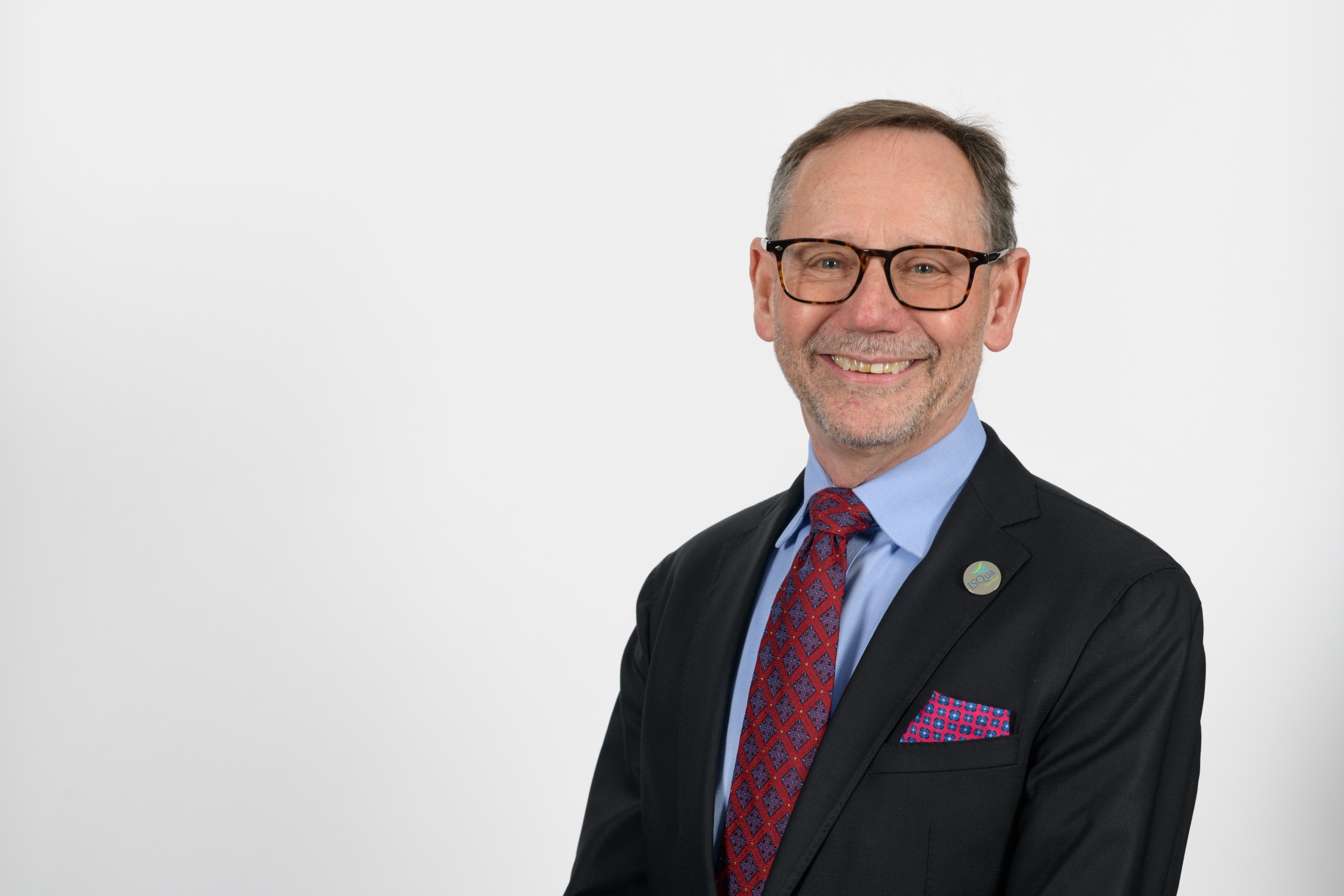 PrevPreviousWellbeing budgets are not the soft underbelly of public policy
NextOn healing, the climate and a focus on solutionsNext