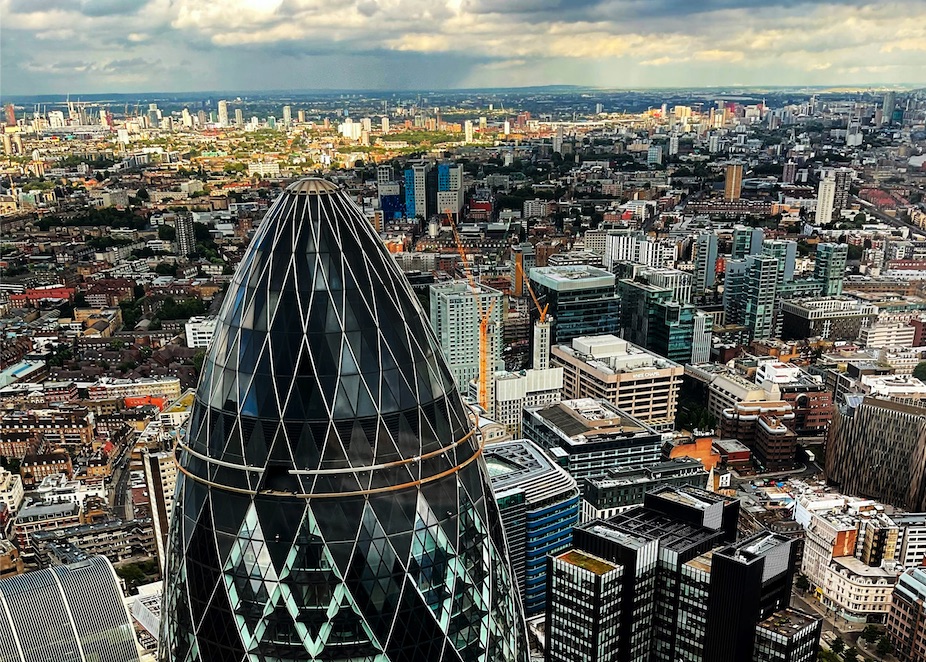 Views from London. Detail from photo by Kunle Atekoja on Unsplash

From England, the message is clear. Address health inequalities, or they will worsen

As Australian health services grapple with surging demand over the months ahead, it’s critical to ensure ongoing access to care and support for those with the greatest need, including for non-COVID patients and under-served communities.

This is a clear message from the experience with “opening up” in England, where new research sounds the alarm about COVID’s impact on health inequalities, reports global health journalist Meera Senthilingam from London.

Step into a shop, restaurant or any indoor space in London right now, and you would be forgiven for thinking the COVID-19 pandemic was nearing its end. The occasional face mask can still be seen, and sanitiser points remain prominent at entrances, but getting close to another customer or roaming maskless to the cashiers or toilets is somewhat normal again.

Gone are the disapproving stares or tuts of annoyance that would have been the norm just three months ago, for now this is legal and socially acceptable – and has been since 19 July.

‘Freedom day’, as it was dubbed by some, was much anticipated following an extensive lockdown through last winter and a very gradual easing of restrictions in England when spring arrived. In the first weeks, caution was still evident, people did not go as wild as many had feared, and cases of COVID-19 stayed low. They even declined at first.

But by the start of August, cases began creeping up again and while there have been dips, case numbers remain high. The daily number currently sits above 37,000, according to government data.

More than 82 percent of people aged 16 and over in the UK have now had two doses of a coronavirus vaccine; when restrictions first eased, the vaccination rate was 66 percent with two doses and 85 percent with one.

It’s this achievement, combined with booster shots for the vulnerable now underway and 12-15 year olds now being offered one dose of a coronavirus vaccine, that the Government is using to keep public health restrictions at bay. It’s also this achievement that is reassuring people as they continue their lives, return to the office and venture confidently into any indoor space – masked or not.

UK Prime Minister, Boris Johnson, boasted at a Downing Street press conference earlier this month that “the result of this vaccination campaign is that we have one of the most free societies and one of the most open economies in Europe”.

But, as autumn begins and winter approaches, there is fear that this ‘free society’ will overwhelm an already stretched health system, that, like all health services worldwide, has been stressed for over 18 months.

While Johnson also announced that mandatory face masks and working-from-home orders will be reintroduced if the National Health Service (NHS) – a national treasure in the eyes of most Britons – becomes overwhelmed, many experts argue it already has. While all eyes are on COVID-19, people are being deprived of treatments for almost everything else.

And among these people being left to wait, it’s particular communities, the most impoverished, that are bearing the biggest burden.

An analysis by the Kings Fund published this week found that a record 5.6 million people in England are currently waiting for planned hospital treatments, such as knee and hip operations, cataracts and other common procedures following the pandemic.

But it also identified a stark difference between areas based on income.

Waiting lists in the most deprived parts of the country grew by 55 percent on average, compared with 36 percent in the least deprived areas, but the range itself was even more disparate with some areas growing by 10 percent and others by 90 percent.

More worryingly, people living in the most deprived areas of England were almost twice as likely to have to wait over one year for such treatments, with seven percent waiting this long compared to four percent in the most affluent areas.

Many were left in limbo, simply waiting for some news during that year. A national poll by Healthwatch England of almost 1,600 British adults found that 46 percent of respondents said they or their relatives didn’t receive enough information, or any at all, about when they can expect their treatment.

The poll also found that more than half of people whose treatment got delayed said this took a toll on the pain they faced as well as their mental health, with 18 percent of respondents having instead opted for private treatment or considering it – a choice more available for the affluent.

“It is not a surprise that waits for NHS care vary across England but the fact that patients in deprived areas are nearly twice as likely to wait a year or more for planned treatment should be a wake-up call for a government that has committed to levelling up the country,” said Kings Fund Chief Analyst Siva Anadaciva in a statement.

The country’s medial officers have warned that waiting lists could increase by up to 13 million in the coming months as people seek care and more referrals are added to the pile. “Waiting lists will grow and likely further intrench the inequality,” the thinktank’s policy analyst Jonathon Holmes told Croakey.

‘Starting from a lower base’

This all stems from existing inequality, including in healthcare. “Health inequalities existed long before COVID-19 and meant people in more deprived parts of the country systematically experienced worse health outcomes,” said Holmes.

Deprived parts of the country then saw higher numbers of COVID-19 cases and deaths throughout the pandemic.

Research by The Health Foundation earlier this year found that COVID-19 mortality rates in people under 65 were 3.7 times higher in the most deprived areas than the least deprived ones, aided by higher levels of infection and worse underlying health.

“Poorer groups are more likely to live in urban areas with high-population density, in houses or flats that are over-crowded, and work in occupations that place them at greater risk ,” explained Azeem Majeed, Professor of Primary Care and Public Health, and Head of the Department of Primary Care & Public Health at Imperial College London. For example, they have less opportunity to work from home than middle-class professionals.

This meant health services in these regions faced more pressure – and disruption.

“They were going into the pandemic starting from a lower base, with poorer health, so as services were disrupted, you accrued a bigger backlog of unmet need,” said Holmes. “And in poorer parts of the country, you’ve got the least private sector capacity and less ability to pay for private care.”

Majeed agrees. “There is strong association between poverty and ill-health. Poorer areas have a higher prevalence of health problems and demands on the NHS are greater,” he told Croakey. “This means that when healthcare is disrupted – as during the Covid-19 pandemic – it will have a disproportionate impact on poorer areas.”

As the UK now goes into winter, COVID and flu cases – along with other viruses – are expected to rise and accentuate the disparity. “It’s likely that this trend will continue in the coming months,” says Majeed.

He adds that disparities in vaccine coverage will further affect outcomes. Data shows that COVID-19 vaccine hesitancy is most common in groups including those from ethnic minority groups and social deprived backgrounds. Studies also show minority groups in England are more likely to live in deprived areas.

“We are seeing clear differences in take-up of COVID-19 vaccines; with uptake lowest among deprived groups, in poorer areas, and among ethnic minorities. These will all drive further health inequalities,” says Majeed. Government data shows vaccine uptake is highest in White British communities and lowest in Black and Asian communities.

While many may therefore feel reassured by vaccination rates in the UK, it’s again the impoverished communities who are at greatest risk – of infection and death from COVID-19, but also being left behind for other treatments.

The Kings Fund has called for urgent action to mitigate this impact, with Holmes adding that while there is a good chance of ongoing COVID disruption this winter, solutions such as prioritising care and predicting conditions that affect poorer areas could help dampen the effect, along with greater sharing of resources across the NHS.

Johnson has also pledged extra budget to tackle the issue by increasing national insurance premiums for the population by 1.25%, with a significant proportion of the revenue dedicated to cutting waiting lists. Experts argue, however, that this won’t suffice.

Earlier this month, The Royal College of Physicians published a position paper setting out the need for cross-government strategies to reduce health inequalities and improve population health. It said the strategy needs to involve all government departments – not just the Department of Health and Social Care and the NHS.

The College highlighted the need to improve wide-ranging issues that affect poorer communities to a greater extent in order to prevent ill health in the first place. “Action must be taken on issues such as poor housing, food quality, communities and place, employment, racism and discrimination, transport and air pollution,” it wrote.

One thing is clear, however: the pandemic has brought health inequalities into the spotlight alongside related issues around ethnicity and health.

The UK Government is aware, has spoken out on this and announced budget – at the cost of the taxpayer – to address the issue, in part.

However, many public health advocates are concerned by an apparent effort by the Government to distract the focus from the structural injustices that cause such health inequalities.

In an article for the BMJ, public health physician Professor Gabriel Scally argues that the Government is changing the language around this issue with its increasing mention of ‘disparities’ rather than ‘inequalities’ to move attention away from this longstanding public health issue in the country.

“The attempt to replace ‘inequalities’, a term used widely and implying an undesirable situation that should be rectified, with the much less common word ‘disparities’, which at its most basic denotes merely the existence of difference, should be resisted by researchers and practitioners alike,” Scally writes. 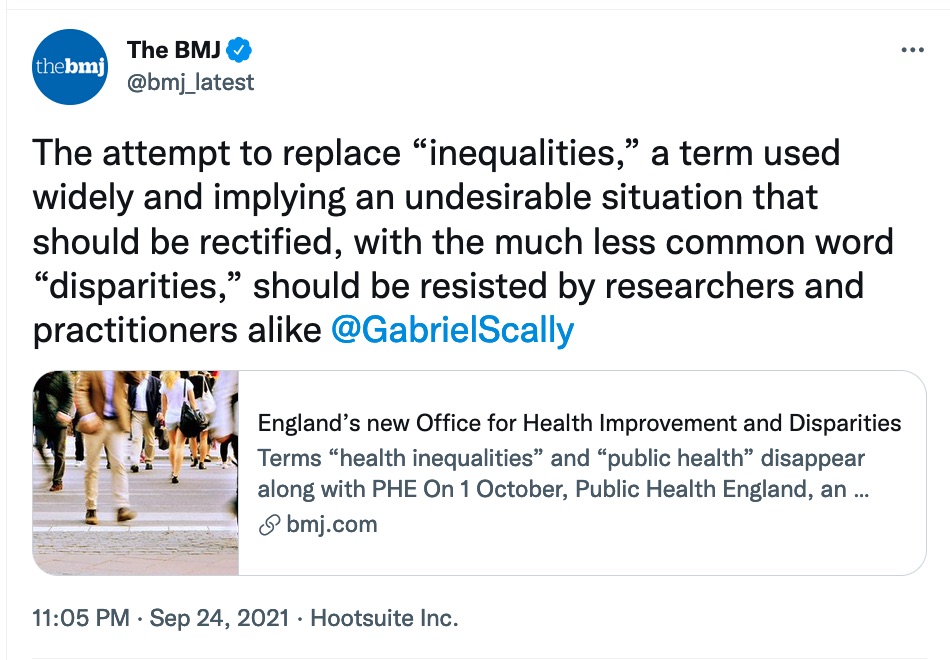 Inequity is also firmly in the public spotlight following extensive research, reports and media coverage of the issue.

But whether health inequities stay in the spotlight remains to be seen.

While we would have said last year that pandemic behaviours have created a new normal, people have just as easily returned to their old norms in a matter of months. Meanwhile health services continue to be overburdened. And it’s not even winter yet. 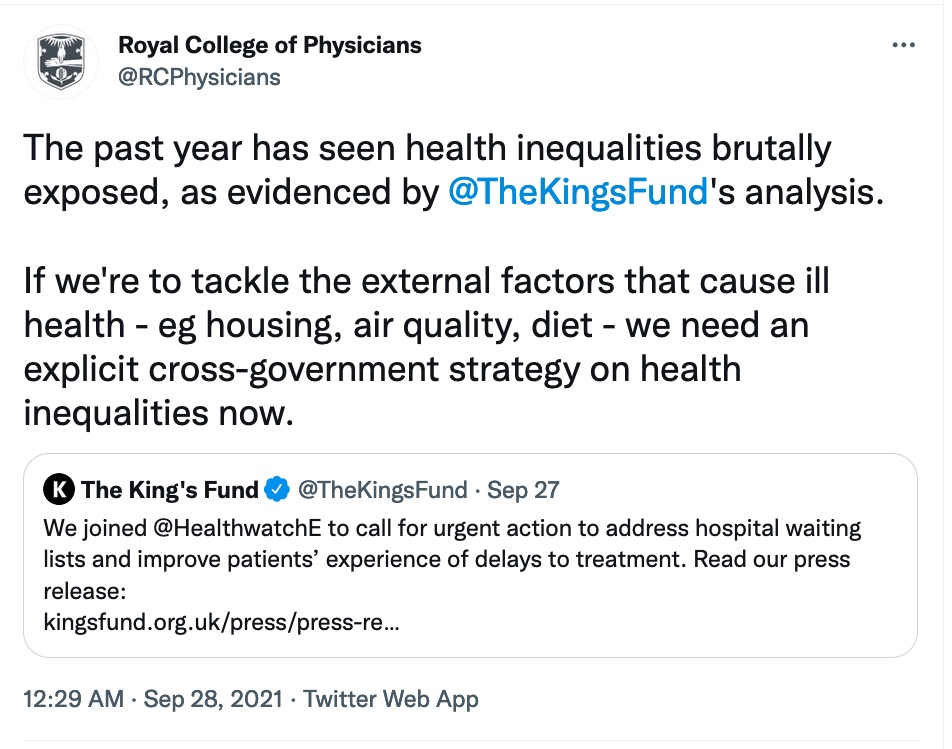 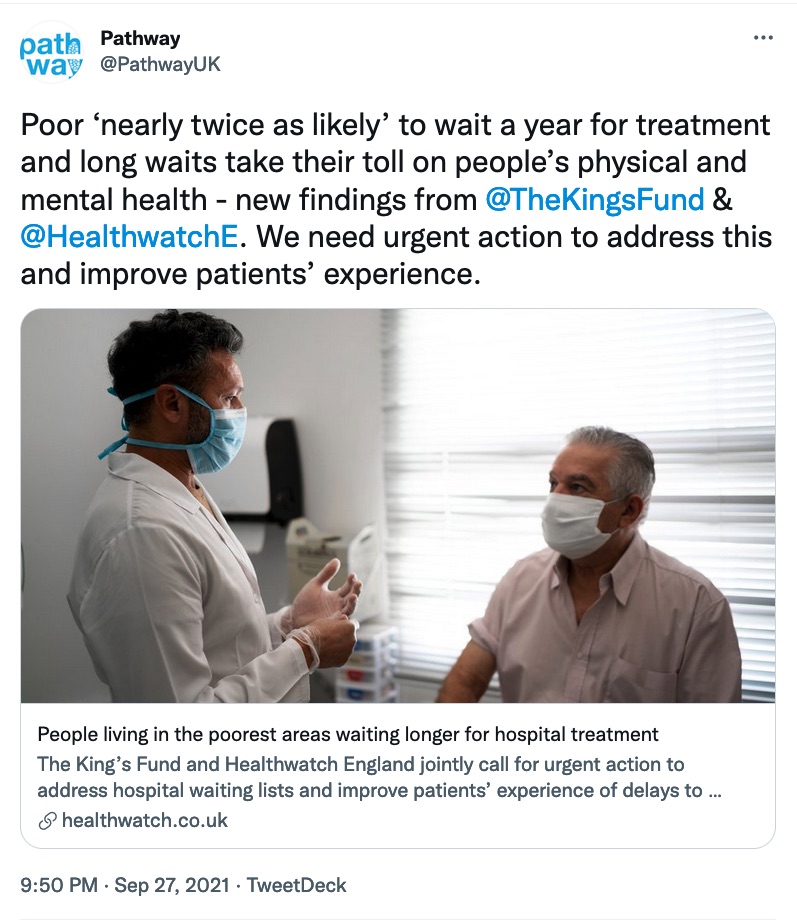 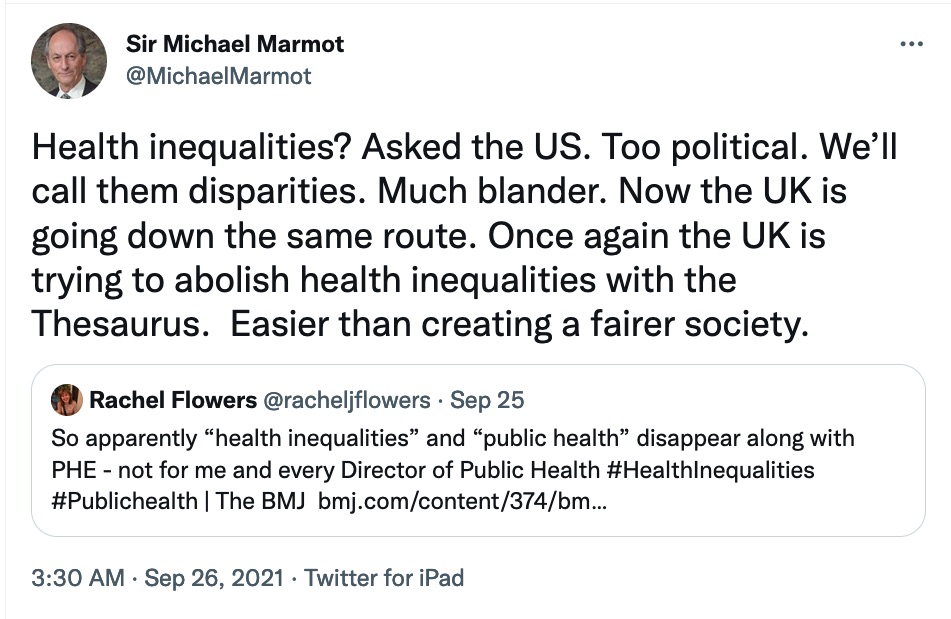 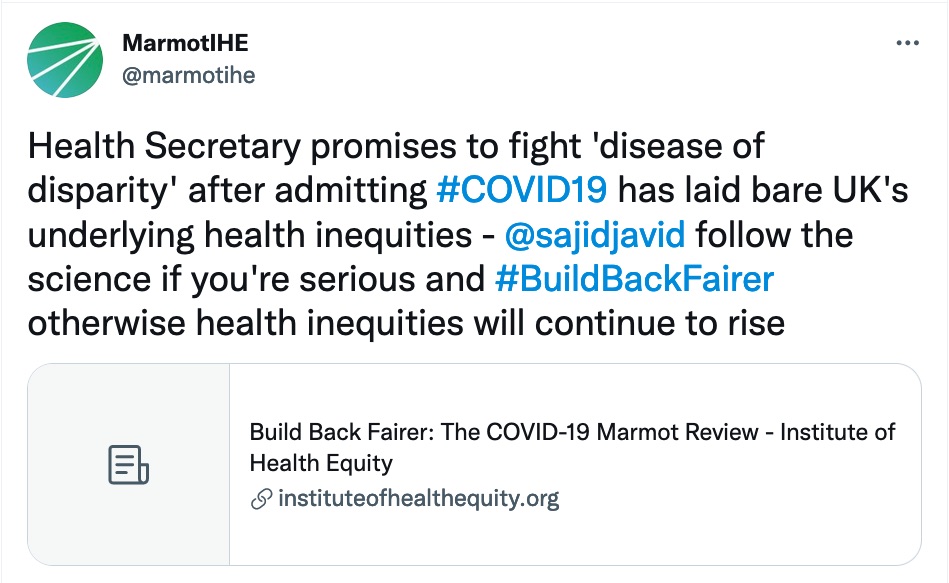 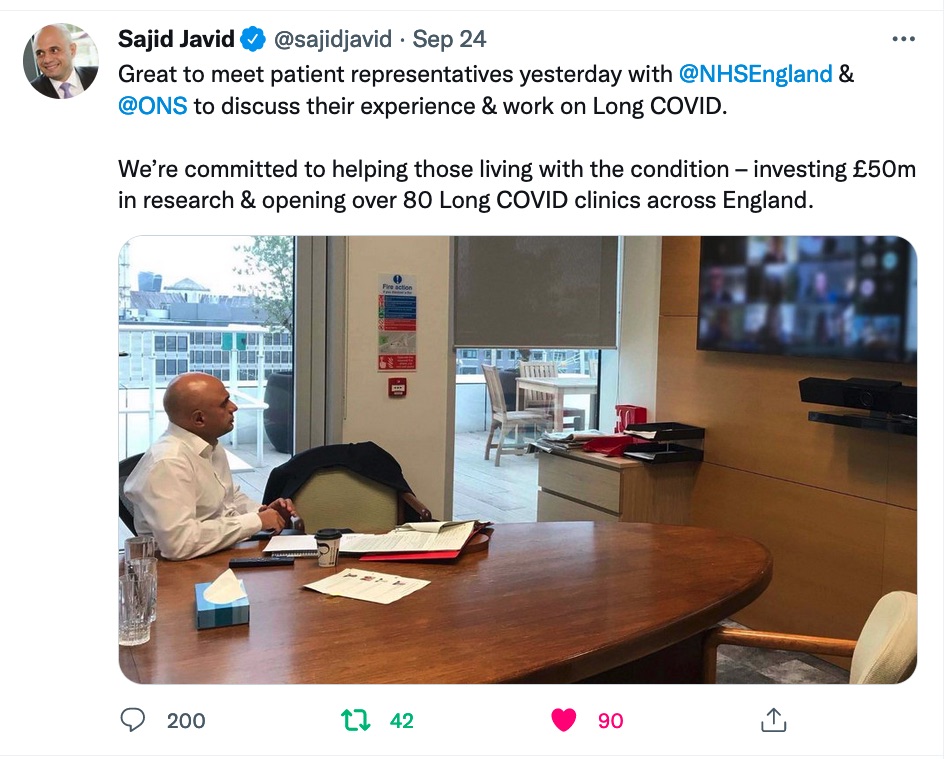 The tweet above by the Secretary of State for Health and Social Care is a reminder that the impacts of COVID on the health system are wide-ranging and long-lasting.

See here for Croakey’s archive of stories on global health.