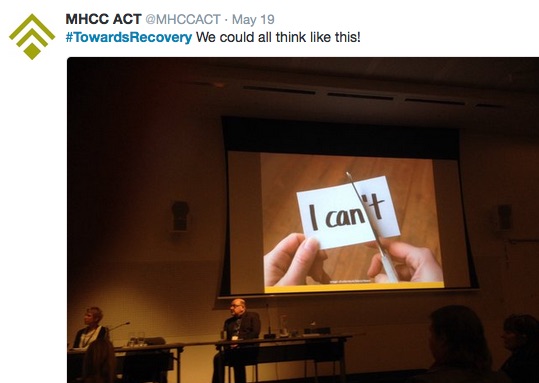 From participant to peer worker: profiling an emerging role in mental health

The importance of supportive systems and networks for peer mental health workers was highlighted at the recent VICSERV Towards Recovery conference in Melbourne.

The conference also heard about a peer program for people with eating disorders that has been sharing stories of recovery, as journalist Marie McInerney reports below, in two articles for the Croakey Conference News Service.

Over the past 20 years, Harvey Baker-Dowdell has had many careers. He has been a chef, trained to be a priest, completed a degree in politics and international relations, worked as a banker, and trained in horticulture.

But now Baker-Dowdell has a role that he wouldn’t have imagined a few years ago – as a peer worker with mental health support service MI Fellowship in Tasmania.

Baker-Dowdell told the recent VICSERV mental health conference in Melbourne that he had experienced depression and anxiety for more than 20 years.

“I always just thought I was a bit strange, a bit weird,” he later told Croakey. “But actually in 2011 I had a really serious mental breakdown, and almost lost my wife and children over the experience.”

But what came out of his recovery, and is being reinforced and shared through his new work role, is that “no matter what you’ve been through, it’s absolutely possible to pick up your life and have that full and meaningful life, the hopes and dreams you once held onto.”

“For me, my recovery has been fairly long and I’m still in recovery,” he said. “I have the same challenges as anybody else has, I’m still reminded every day of my mental illness. I live it, but it’s only part of me, it’s not the whole of me.”

Baker-Dowdell, who is in his late 30s, has moved from receiving support in his recovery from mental illness at MI Fellowship into a paid position as a peer worker (people with lived experience of mental illness, or of caring for someone with a mental illness, working in mental health).

His role is to walk alongside other service users, and share his experiences and insights about his recovery with others experiencing mental health issues and with other workers without that experience.

“I think we bring a very unique skill and contribution to the community space,” he said.

Baker-Dowdell, who is one of just four paid mental health peer workers in Tasmania, and his supervisor, social worker David Wilkes, presented to the conference their insights on how best to support and develop peer workers, particularly given there are still relatively few in the sector and they can often feel tokenistic and isolated.

An important part of their relationship was daily contact, often just a catch-up, and an ongoing focus on self-care, they said. This was important not just because of lived experience of mental illness, but because often it can be the peer worker’s first experience of work in human services, often with consumers in very vulnerable places.

Theirs was one of a number of sessions highlighting the emerging role of the peer workforce in mental health at the conference, including one timely session on the implications for this workforce of the National Disability Insurance Scheme (NDIS) which will start to be rolled out nationally in July.

Growing recognition of the role and value of peer services is seen as illustrating a paradigm shift in a recovery-oriented mental health service, viewing lived experience of mental health as not part of the problem but part of the solution.

But the conference heard there is a long way to go to address tokenism and resistance, and that peer workers need good training, clear job roles, adequate support and supervision and inclusive workplaces.

Questions about the NDIS

But there are mixed verdicts on what the NDIS might mean for peer workers.

With consumers able to choose under the NDIS who they want to deliver services, it may mean the growth of peer-led organisations and the potential development of wholly consumer owned and run services.

But one presentation warned that funding under the scheme might also reduce incentives for community mental health organisations to develop, expand or enhance their lived experience workforce.

“This limitation is effectively moving against the tide of change where mental health peer work is increasingly recognised and growing,” warned members of the Pathways team, which has piloted an official Traineeship in Mental Health Peer Work.

This new model provides formal mentoring and support in the workplace, and the peer workers complete a range of training and professional development options including the nationally accredited Certificate IV in Mental Health Peer Work.

Other sessions highlighted the need particularly to bring peer workers together more often, with non peers, and also in their own networks.

Conference participants heard about the Eastern Peer Support Network (EPSN) which was set up to bring together peer advisors, workers and people with lived experience of mental health and/or alcohol and drug issues to meet on a monthly basis, to develop a regional approach to peer networking, workforce development and training.

Peer worker Paula Kelly said the project developed by co-design of discussion topics, what skills people wanted to build, and the speakers they wanted to hear. Discussion topics ranged from stigma and self care through to training and systemic change.

What was particularly helpful, she said, was that the network project was set up by an alliance of services, “so we had a ready-made platform to bring (peer workers) together”. But still not all of the services in the region engaged with the network – “to the detriment of their peer workers,” she said.

Kelly would like to see statewide funding invested in more peer hubs and networks so that all peer services and peer workers could start to align. “We all seem to be duplicating what we’re all doing,” she said.

Another presenter stressed the value of the peer workforce in spreading “the word of hope”, and developing hubs as “a really strong force in prevention as well as recovery”.

• Watch a video interview with Harvey Baker-Dowdell at the bottom of this post.

Stories of recovery from eating disorders

The conference also heard about a peer program for people with eating disorders that has been sharing stories of recovery as a powerful way to promote hope, inspiration and optimism among groups of people currently receiving treatment. 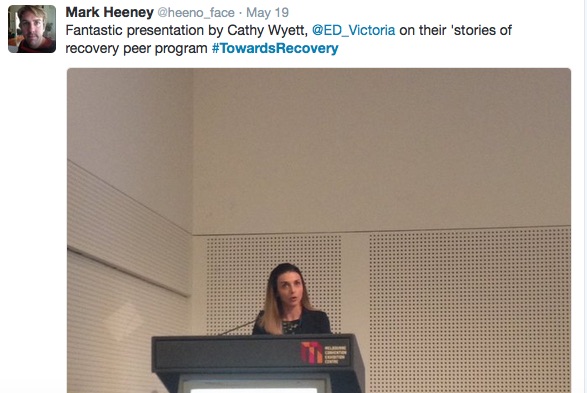 She told Croakey after the presentation that EDV was confident the program would be effective, but even they were surprised to learn that for some patients it was the first time they had ever met someone who had recovered from the condition.

To us, that was unexpected and amazing, that this person might have been in hospital multiple times but never met anyone who had recovered from the illness they have.

Not having that perspective (of the chance of recovery) can do terrible things to your sense of hope. People were really moved by being able to hear from someone who is now thriving and surviving.

It’s very different to being told ‘yes, you will recover’ by a health professional who is equally invested in your care but hasn’t been there themselves.”

Wyett’s presentation provided an insightful account of the benefits and challenges of running a peer support program.

She said Stories of Recovery aimed to carefully select and train a diverse group of recovered speakers, who could help others still struggling with eating disorders and build on their own sense of worth. They also helped to bust some myths around eating disorders and to set up good relationships with hospitals and health workers, and patients and families on release.

Wyett said one of the main goals was to try to represent the diversity of eating disorders, to counter stereotypes that they only affect young girls with anorexia, when men and older women could also be affected.

“Everyone focuses on the Caucasian teenage girl,” she said. “We really wanted to get across that an eating disorder looks very different for every person, and there are lots of different diagnoses that come under the banner. People experiencing them feel alienated by the stereotype, so we’re really trying to bust that myth.”

Wyett said the program is delivering many benefits, including for the volunteer speakers who have been really “energized – not to dwell on the hard times but to support others’ recovery”.

Hospital staff get a lot of out it too, she said, particularly for those who had known the speaker as a patient.

The program was also giving EDV a better understanding of hospital referral processes and admission criteria that can be fed back to people seeking support on the EDV helpline, as well as letting patients and families know about services available when they leave treatment.

But there have been challenges too that weren’t anticipated.

Wyett said EDV had thought the program might not be able to get enough volunteers or that hospitals wouldn’t be interested or see the value in the program. However, these concerns have not been realised.

In fact, there’s been great interest from hospitals, but also many layers of bureaucracy to negotiate to manage risk or other issues around bringing an external group in to work with a complex group of patients.

“With one hospital, we’ve been in conversation for over a year now and still haven’t signed off, despite everyone (there) being really enthusiastic,” she said.

Unfortunately, the stigma and stereotyping around eating disorders that the program aims to address has meant that, to date, they have been unable to recruit any men who have recovered.

“There’s a lot of stigma around eating disorders in general, but it’s still very much perceived as a female illness, so many men feel increased stigmatisation as a result.”

To help address stigma and encourage greater awareness of the warning signs of an eating disorder, EDV will on June 9 launch a new campaign – ‘How far is too far?’

Croakey readers can check it out on Facebook as the launch date nears. Meanwhile, June 2 will be the first ever World Eating Disorders Day.

• Bookmark this link to track the coverage.