From Songlines to Twitter: communicating and connecting for Aboriginal health

One of the sessions at the Living Longer Stronger conference in Sydney next week will examine the potential of digital media and communications in improving Aboriginal health. (That’s the Aboriginal Health and Medical Research Council of NSW Chronic Disease conference, and its Twitter tag is #LivingLongerStronger.)

In the article below, Justin Mohamed, chairperson of NACCHO (and Tweeter at @NACCHOAustralia), says that forms of social media have been in use for a very long time, and that modern communications technology is being widely embraced in the push to improve Aboriginal heath and wellbeing.

For over 40,000 years Aboriginal people have used a culturally based form of social media called the Songlines to connect, share engage and record news and information across this great continent.

Also called Dreaming tracks within the Aboriginal belief system, they are paths across the land or sometimes the sky that mark routes and provide signs since the beginning of time.

The routes and signs have been used by our mob in our cultural journeys across the land and sea, and link many sacred sites that form a web of Dreamtime tracks criss-crossing the country.

Today both urban and remote Aboriginals and their community controlled organisations have continued their Songlines and cultural practices by embracing and adopting modern communication technology including satellite television/radio, video making, locally produced television, the internet and more recently social media.

As part of NACCHO’s Strategic plan 2011-12, social media was identified as an effective means of communicating key corporate objectives to connect, engage and inform members, their communities and stakeholders into the future.

• Promoting, developing and expanding the provision of health and well being services through local Aboriginal Community controlled Health services.

• Liaison with organisations and governments within both the Aboriginal and non-Aboriginal community on health and well being policy and planning issues.

• Fostering cooperative partnerships and working relationships with agencies that respect Aboriginal community control and holistic concepts of health and well being.

The totally integrated social media model originates from a WordPress Blog that allows all information, communiqués and reports to also be disseminated through twitter (@NACCHOAustralia) and Facebook (Naccho Aboriginal Health).

A new state of the art WordPress website will go live in early August (current www.naccho.org.au) to support our social marketing model.

Many of our members and stakeholders were initially cautious of social media as a marketing/public relations medium.

But we have learnt that by having some basic procedures and protocols in place. our organisation and networks can avoid embarrassing “gaffs” and achieve great positive partnerships and outcomes through the use of social media.

The depth and complexity of our Aboriginal controlled health services provided to our communities and the professionalism of the staff across all member services is inspirational and it is that message we can share with the broader non-Aboriginal community in the social media space.

We also want to use social media to keep a focus on the battle to Close the Gap within a generation and to ensure governments at all levels address the wide range of social issues faced by many Aboriginal Australians. 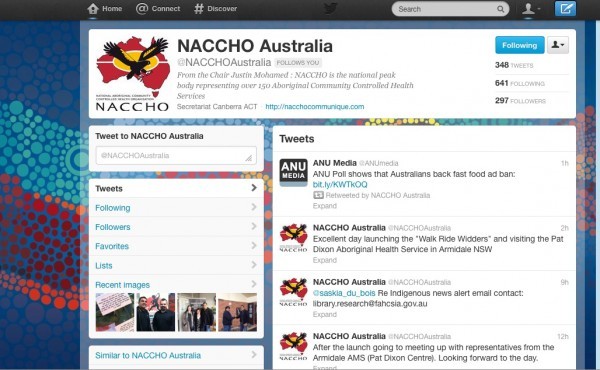