From the frontlines: public health and a suffocating city

It may take years before the full extent of the public health disaster now unfolding across many Australian communities is properly understood.

However, a few lessons are already apparent from the experiences of people in Canberra, says Associate Professor Gemma Carey, Research Director of the Centre for Social Impact at the University of New South Wales. These include the need for better health warning systems, especially around hazardous air pollution, and for equity considerations to be foremost.

Her article below has been submitted to the Health Promotion Journal of Australia and is cross-published here with permission.

Below the article, see resources and tweets about health and the bushfire crisis, and a video featuring Dr Cate Ealing in Canberra.

Just before Christmas I wrote an editorial in The Guardian on being pregnant in the climate emergency. At that time, dangerous particles of 2.5 micrometres or smaller (‘2.5PM’) were at 100-300 – ranging from serious to hazardous.

I wrote about the complex emotions of being stuck inside, where the air was clean, watching the world burn beyond my windows and wondering what the future might hold for my child. I wrote of having not seen the sky in a month. A week later, this already feels dated, such has been the rapid escalation of the fires on the coast of New South Wales.

While smoke has blown in and out of Sydney and Canberra for months, the unprecedented fires which began on New Year’s eve brought a thick ‘fog’ of smoke across the ACT and parts of New South Wales. Canberra, where I live, is perhaps worst hit with particle readings of up to 1800 2.5PM. The limit for hazardous levels is 200 2.5PM in the ACT, according to the ACT Government.

Let that sink in, we are nearly 10 times above the highest ‘hazardous’ readings and as I type Canberra has the poorest air quality in the world. Forget about seeing the sky, I can no longer see my front fence.

Our Prime Minister Scott Morrison has made much of the ‘Canberra Bubble’ since taking office, a glib term meant to denote affluent people detached from the realities of ‘real Australians’. Canberrans do not vote in our government. The politicians do not live here. The so called ‘Bubble’ is suffocating in smoke, while the Prime Minister remains staunch on making no changes to climate policy even as the crisis grows.

For those like me who are pregnant, high 2.5PM has been linked to low birthweight, premature babies and miscarriage (Zhang et al, 2018). Children exposed in utero are also more likely to experience elevated blood pressure and respiratory problems (Soh and et al, 2018; Zhang et al, 2018).

These studies, however, are based on ambient levels in large cities – people going about their day to day lives in relatively normal conditions. We need also consider the research on the impact of natural and manmade disasters and child development to truly understand the scale of implications for those in utero. Studies of the impact of children in utero during the Christchurch earthquake, for example, show reduced executive functioning in years to come (Dobson, 2017). In Australia, we are experiencing a compounding of the stress associated with being in utero during a disaster, and the long-term health impacts of 2.5PM exposure.

All of this research, however, is based on cities with a mean of 35 2.5PM, and an upper range of 80 2.5PM. Cities such as Canberra, and at times Sydney, have sat at 700 2.5PM for weeks at a time. We have no precedent in the scientific literature for the health implications of what is currently happening in Australia.

We also know that the impact of these events will not be felt equally, even by those in the same city. Research on Canberra is already showing that, like almost all social determinants of health, the hardest hit are those who are less affluent. The National Centre for Epidemiology and Population Health at the Australian National University released preliminary research that showed low socio-economic areas, which tend to be higher density, have higher 2.5PM readings (as reported in The Canberra Times).

More critically, perhaps, is the prohibitively high cost of obtaining clean air in the city. Since New Year’s, nowhere indoors is safe. Shopping malls, libraries and national monuments – where many were seeking refuge – are filled with smoke. Air conditioning systems are simply not designed for this level of pollution.

My own home, which was designed as a self-sufficient eco home and has an impressive air lock, also began to leak on New Year’s Eve when the smoke blew from the South Coast over Canberra in a haze thicker than we have seen in the months of fires to date.

To keep air within our homes from becoming increasingly lethal, people across Canberra are buying air purifiers. They are buying them at such a rate that there are none left in the city or surrounding rural centres. A high quality purifier that can service a home costs $500-800. This is a cost – particularly at short notice – that is beyond the reach of many.

While we wait for friends to do an emergency run to Sydney to pick up air filters, we wear high grade pollution masks in our house. Let that sink in. I am wearing the highest-grade pollution mask available, inside my air-locked home. I take it off only to shower and eat.

My mask was purchased from the UK, costs $50 and is only good for 100 hours in this level of pollution, before it needs to be thrown away. Those who cannot afford such a cost are buying cheap paper masks from chemists are hardware stores. These are not designed for the levels of 2.5PM we are experiencing, and they are also made – like much emergency equipment – for men. This means that women and children cannot get masks locally that seal properly to their faces – rendering them useless.

In the midst of this crisis we are seeing significant new challenges emerge for health promotion.

How can we ensure there are local supplies of face masks that are effective and fit a diversity of people? How can we get air purifiers to those who can’t afford them?

Despite warnings, few preparations were made. Given the inaction on climate change, fires such as we have seen over December and January are likely to become more common. Into the future, we will need much better disaster planning around air quality.

Given both the extent and the lack of preparedness of our communities, the long-running health implications of current events are likely to be severe.

Hundreds of thousands of people have been inhaling hazardous levels of air pollution for months. While more people can be seen wearing masks (however poor) since the crisis New Year’s, air quality was sitting at hazardous for over a month before this.

Despite this, few people could be seen with masks on the streets of Canberra and many were out exercising, and drawing toxic particulates deep into their lungs, and passing through into their blood streams.

Health messaging has been poor. While government websites have provided warnings and air quality reports, there has been little information in the news or direct efforts made to warn or contact local residents. These events have shown that our health warning systems need serious work.

We will be counting the public health implications of current events for years, if not decades, to come.

Without immediate action on climate change, living in facemasks trapped in our houses could become the new normal for Australian summers. 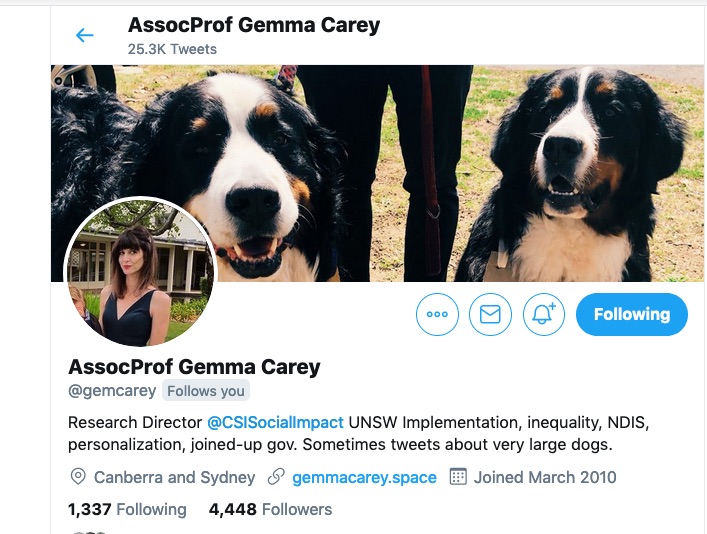 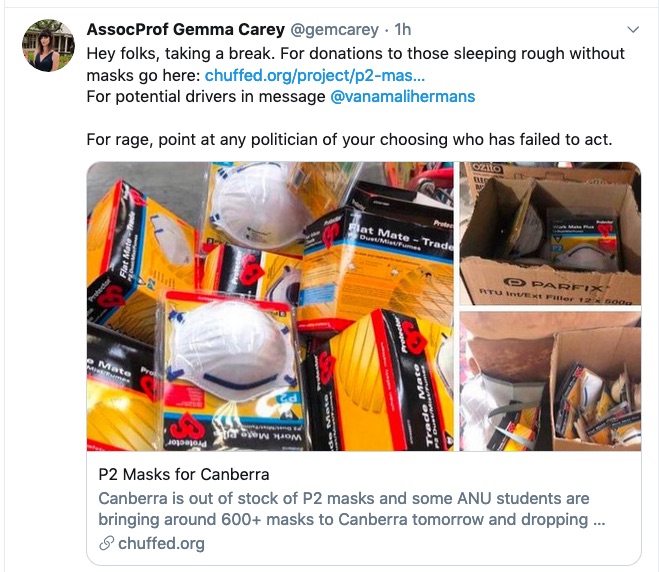 Doctors for the Environment Australia member Dr Cate Ealing is speaking from Canberra, the most polluted city in the world on New Year’s Day 2020, when the Monash air quality station had an index rating of 3589 at 8 AM. Anything above 200 is considered hazardous. The ACT Emergency Services Agency was busy responding to ambulance call outs for people affected by smoke and dust.

NSW Health information on face masks, including how to fit them properly 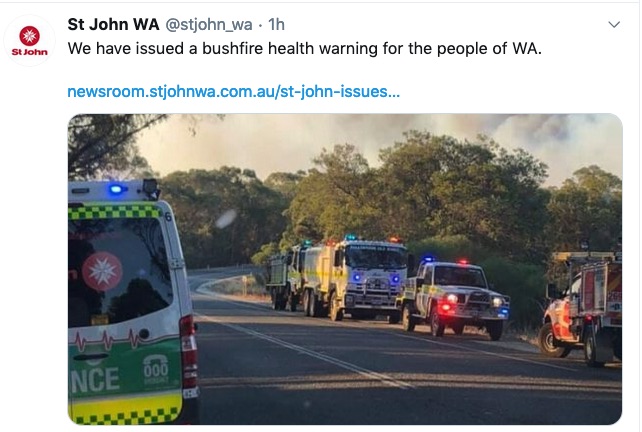 Emergency information for people who are deaf

Information for GPs (including mental health and children’s issues) 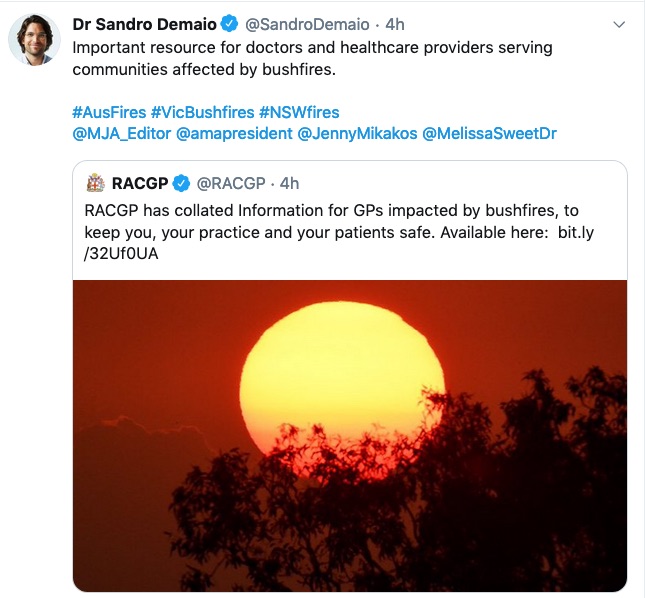 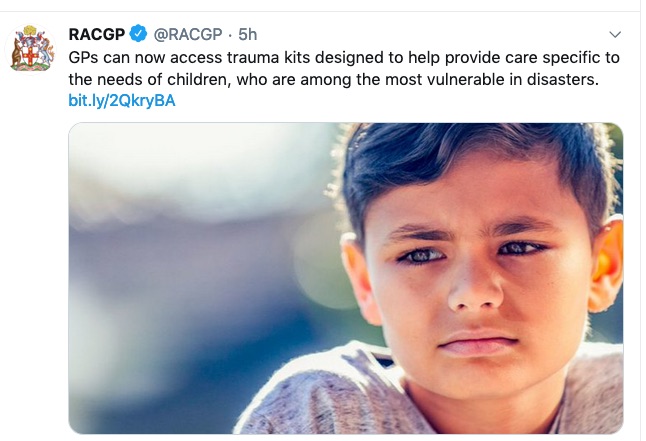 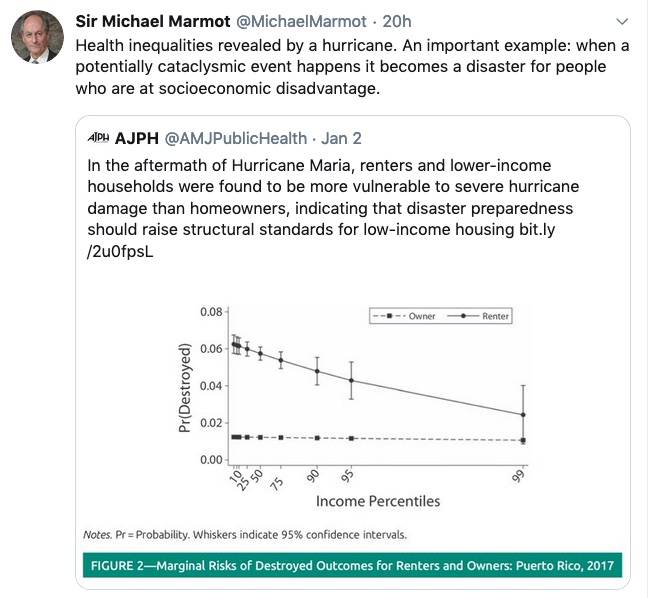 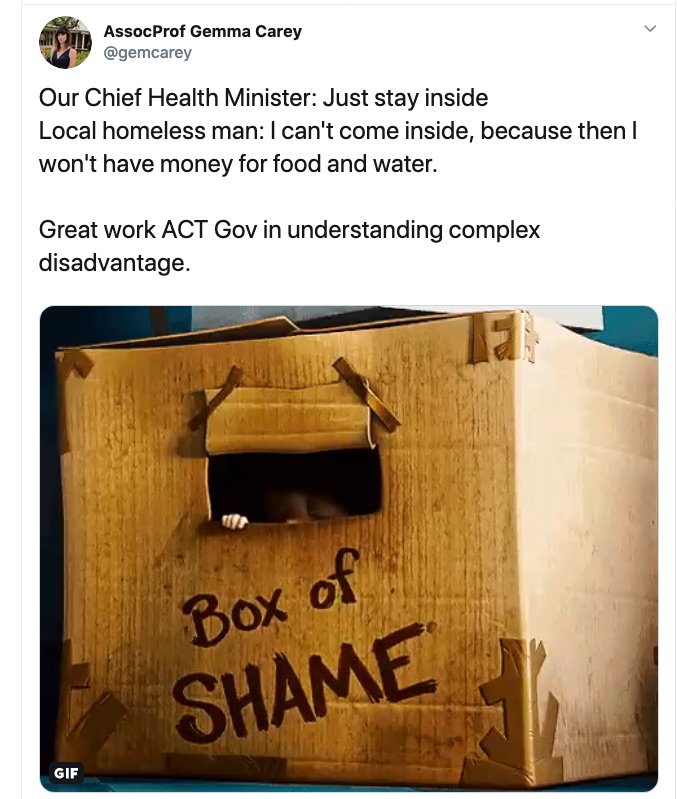 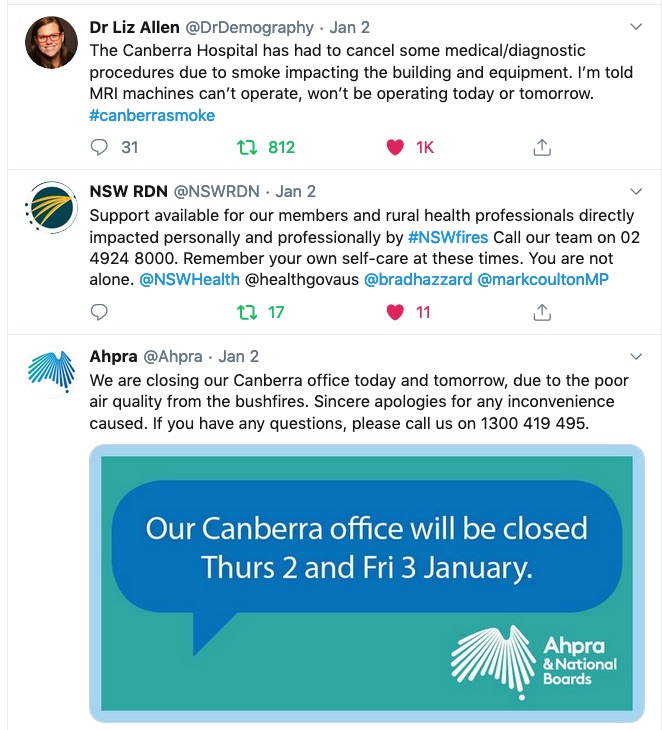 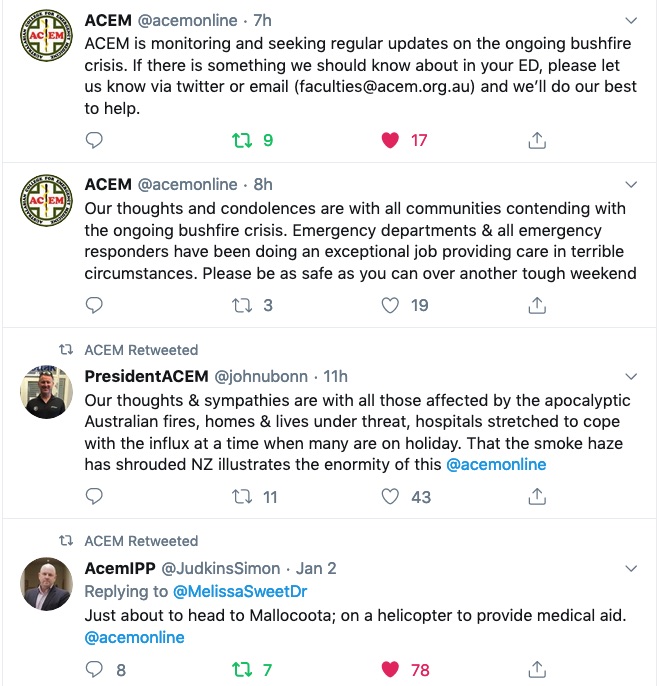 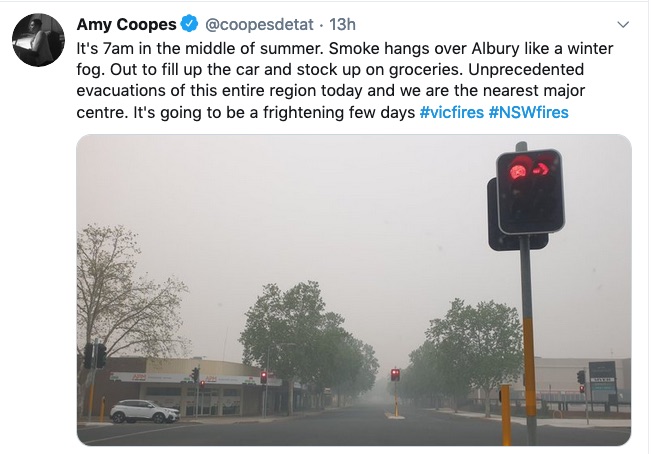 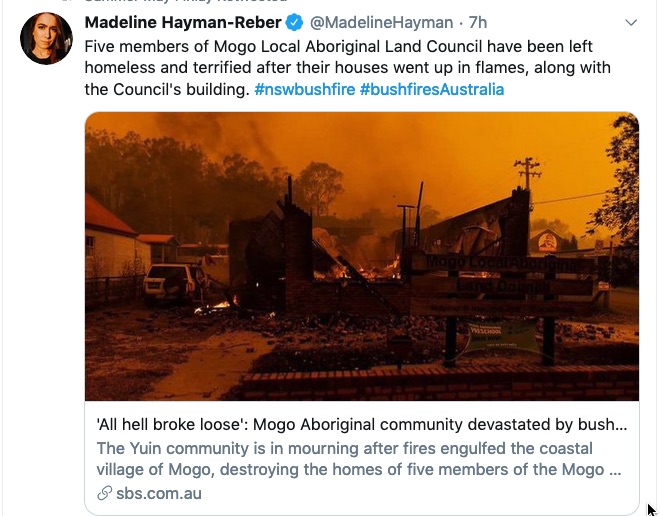 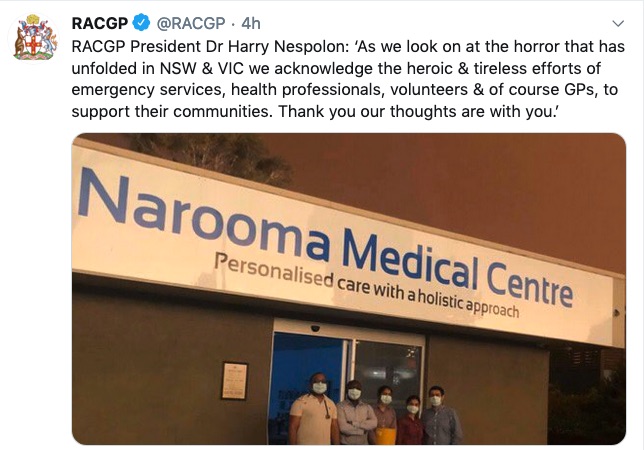 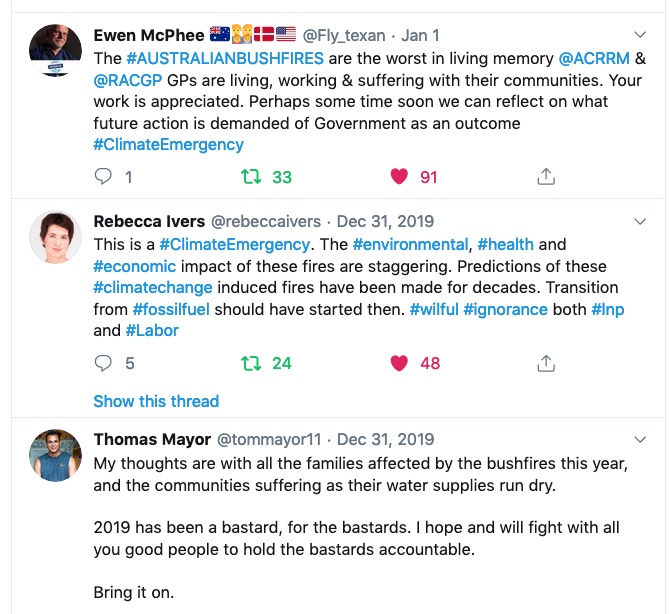 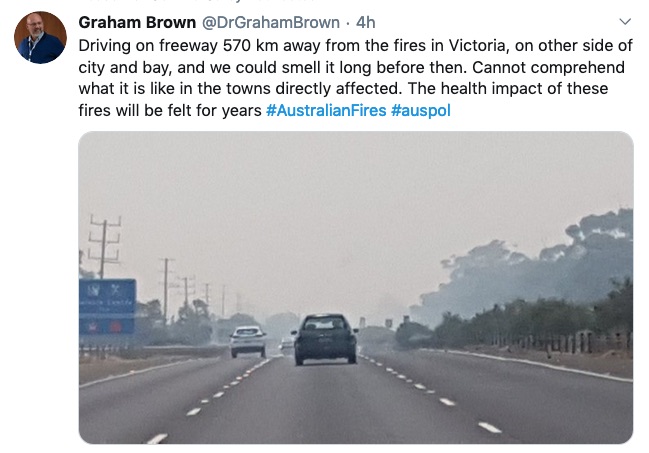 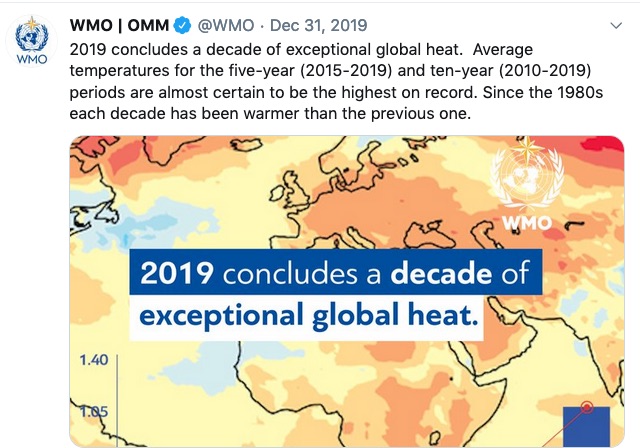 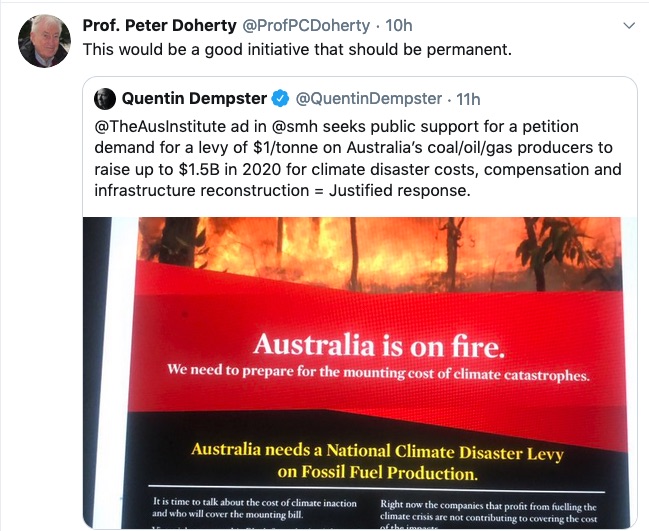 PrevPreviousMaking the case for health warnings on salt shakers and very salty food in restaurants
NextPhysical health should be “routine care” in mental health, including in refugee campsNext