The existential threat of climate change and the critical importance of connection to Country were centre-stage issues at the recent Lowitja Institute International Indigenous Health and Wellbeing Conference conference in Darwin, held on Larrakia land.

Two international keynote speakers, from Hawaii and Bhutan, called for global action on climate change to address risks for countries and communities that have done little to contribute to the climate emergency but are on the frontlines of rising sea levels and melting glaciers.

In the story and interviews below, Marie McInerney and Summer May Finlay report for the Croakey Conference News Service.

Over the past 40 years or so Bruce Blankenfeld has voyaged nearly 250,000 kilometres across the oceans of the world in a waʻa kaulua, a double-hulled voyaging canoe, using just the stars, wind, sun, moon and waves to navigate – night and day – for weeks at a time.

A stevedore by trade, Blankenfeld is a senior member of the Polynesian Voyaging Society, which was launched in the 1970s in Hawaii to rediscover the art and science of traditional Polynesian voyaging.

The maiden voyage of the now legendary Hōkūleʻa was born of a determination by the Society’s founders to honour their Polynesian ancestors’ epic voyages and migration across the Pacific centuries ago and herald a renewal of Indigenous Hawaiian culture.

Multiple journeys since have seen the Society add another mission to its bow, to alert the Pacific region and the wider world to catastrophic climate change, massive over-fishing, and other existential environmental threats.

“We understand that Indigenous wisdom is the key to moving forward and healing this planet,” Blankenfeld told the Lowitja Institute conference.

Importantly, he said the Society also laid to rest paternalistic Western narratives that his ancestors had found their way across the seas just by “accident and drift”, that they sailed, as one authority put it, “at the mercy of the winds and the currents”.

This Western denigration of complex and sophisticated Indigenous knowledges was a strong theme at the conference, including from best-selling Aboriginal author Bruce Pascoe whose landmark book Dark Emu has challenged the entrenched colonial narrative that pre-colonial Aboriginal society was “merely a hunter-gatherer society and was uncivilised”.

Blankenfeld told the conference the Pacific Voyaging Society emerged at a time when Hawaiian culture was “really at a low ebb”, with traditional language still banned in schools and many parents taught by colonisers to be too ashamed of their culture to give their children Hawaiian names.

Many doubted the possibility and point of the Society’s determination to build the first traditional voyaging canoe of its type in 400 years and to undertake a maiden voyage over 3,700 kilometres from Hawaii to Tahiti.

Some warned: ‘Don’t waste your time’, or ‘It’s not going to feed your family’.

“There was a sense of shame there and also an expectation that what we were going to do was going to end in failure,” he said.

But rediscovering how to build the majestic waʻa kaulua – around 18 metres long and six metres wide and able to hold 12 or so crew and passengers and the food and water needed for the weeks of their journeys – and to learn and practise the ancient tools of navigation – “wayfinding” without compass, chart or GPS – has been a huge success.

The biggest voyage to date, the Malala Honua Worldwide Voyage, which launched in 2013, travelled to more than 150 ports, 23 countries and territories, and eight of UNESCO’S Marine World Heritage sites, engaging local communities and living sustainably. Another bigger one is planned for next year.

These boats have become “floating classrooms” that have sounded the alarm globally on the environment and helped reconnect many Hawaiians to their traditional knowledges, culture and language that were devastated in just over a century of colonisation, opening up “more and more doors to the possibility of who we could be”, he said.

Blankenfeld told Croakey that wayfinding has changed the way he sees the world.

That’s both in the extraordinary and humbling experience of being just a speck out on the oceans, deeply among the elements, and then with the shocking realisation of what we are doing to them.

“And then you see all this trash,” he said, describing the growing flotsam and jetsam of discarded fishing nets and other rubbish that float by in each voyage.

As well as the plethora of nets, he’s struck by how many toothbrushes and cigarette lighters float past as a toxic smorgasbord that causes untold harm to birds and fish, including the graphically documented deaths of tens of thousands of albatross chicks on the island of Midway, stomachs filled with plastic.

Alarmed at the impact also of overfishing and acidification of the oceans, the Society has been working with oceanographers and scientists, and keeping an eye close to home where Hawaii’s reefs and islands suffer a “constant assault of overfishing, urbanisation and runoff”.

Blankenfeld said Indigenous Hawaiians see their islands via ahupua’a, wedge-shaped land divisions that go “all the way from the mountains past the shallows of the shore out past the reef” – designated to contain nearly all of the resources its people need for survival.

It’s an understanding that also applies to the Pacific Rim and to the “island Earth”.

That symbiosis was a message that resonated across the conference, including for and from the three-person delegation from Bhutan, whose famous Gross National Happiness index measures prosperity by the wellbeing of its citizens, not by economic growth.

Yet their future is in the hands of the rest of the world, Dr Julia Kim, Program Director of the Gross National Happiness Centre Bhutan, said in a keynote address.

Despite having become the first “carbon negative” nation, she said Bhutan faces the threat of massive flooding from melting glaciers unless the rest of the world heeds the warning that only a decade remains to stop irreversible damage from climate change.

Kim’s team was invited to Darwin after she met former Lowitja Institute CEO Romlie Mokak last year at a Robert Wood Johnson Foundation conference on the theme of “advancing wellbeing in an inequitable world”, which produced this report.

Mokak, who was this year appointed as the first full-time Indigenous Policy Evaluation Commissioner of the Productivity Commission, told Croakey he was struck by Bhutan’s leadership “on their desire to construct a future in contrast to dominant Western systems”.

“The parallels to Indigenous peoples’ knowledges, connections and aspirations were obvious to me,” he said.

Kim talked about her own journey to Bhutan  from her early work as a Canadian doctor, when she got a “huge wake up” call on her own doorstep about health disparities.

In later postings including with the United Nations Development Program, she was struck by contradictions – in South Africa, where she was invited into homes for tea and bread by families who did not have enough food for themselves, and then in London where big salaries led to “time poverty”, with people too busy to catch up with family or friends.

It made her question the accepted wisdom on development – “we only talk about under development, it is possible to over-develop?” – and led her to critique the value of measuring the prosperity of countries by gross domestic product (GDP).

Those critiques go far back, including in the 1960s from US Senator Robert Kennedy, who warned against a measure that counts “air pollution and cigarette advertising, and ambulances to clear our highways of carnage” and fails to count “the health of our children, the quality of their education or the joy of their play…the beauty of our poetry or the strength of our marriages, the intelligence of our public debate or the integrity of our public officials.”

Echoing many of the presentations on the need to embrace the strengths of Aboriginal and Torres Strait Islander cultures and communities, Kim talked about three key disconnects that are part of the financial, environmental and social crises of the 21st century.

It all points to a need to tap into the wisdom of cultures like Indigenous communities and the Bhutanese who have “preserved a connection to nature is so much needed at this time”, Kim said, also quoting opening day keynote speaker, senior Yawuru man Peter Yu: 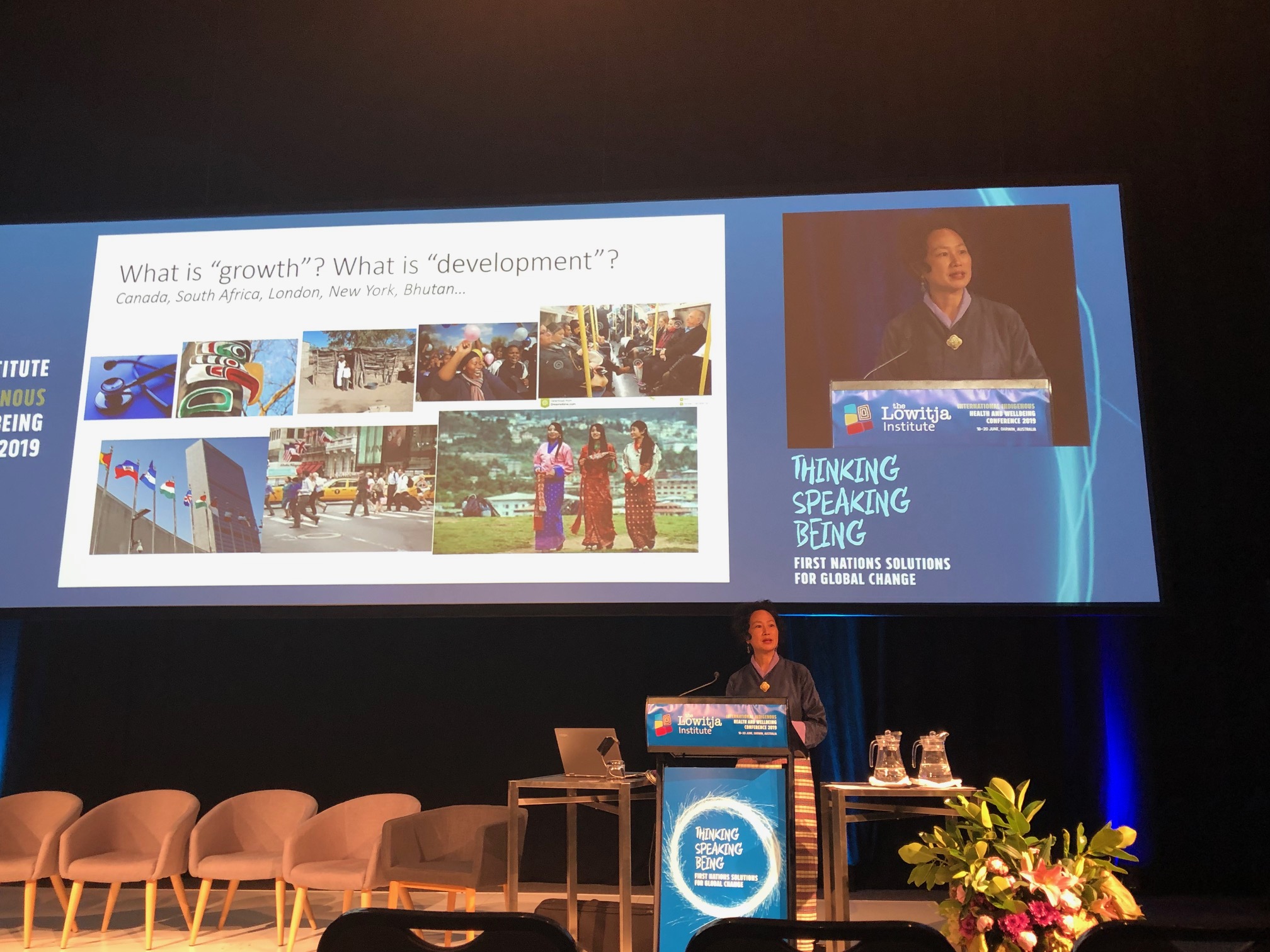 Kim told the conference that the work of the Gross National Happiness Centre Bhutan is focused on bridging those disconnections and finding ways to “balance the inner conditions for happiness and create systems and structures that allow happiness to flourish”.

In Bhutan, those systems and structures include the nine domains against which all policies and projects are screened: psychological well-being, living standard, health, education, culture, community vitality, good governance, balanced time use and ecological integration.

It begs the question of whether the Adani mine would have got the go-ahead if it had been put to that test.

But as the threat of climate change illustrates so harshly, Bhutan cannot just go it alone, so  is working to develop more partnerships internationally, including in Australia. It welcomed the handing down last month of a Wellbeing Budget in Aotearoa/New Zealand, the first Western nation to prioritise wellbeing over economic growth, after Bhutan and Costa Rica.

“Whether global leaders want to admit it or not, we are all in the same boat”.

In a final message to the conference, Lowitja Institute chair Pat Anderson AO said she believed Indigenous people and knowledges held the answers to such threats, through deep connections to culture, community and Country.

I sincerely believe the solutions for the planet live and reside globally with its Indigenous people.”

Watch this video featuring Anderson and other keynote speakers 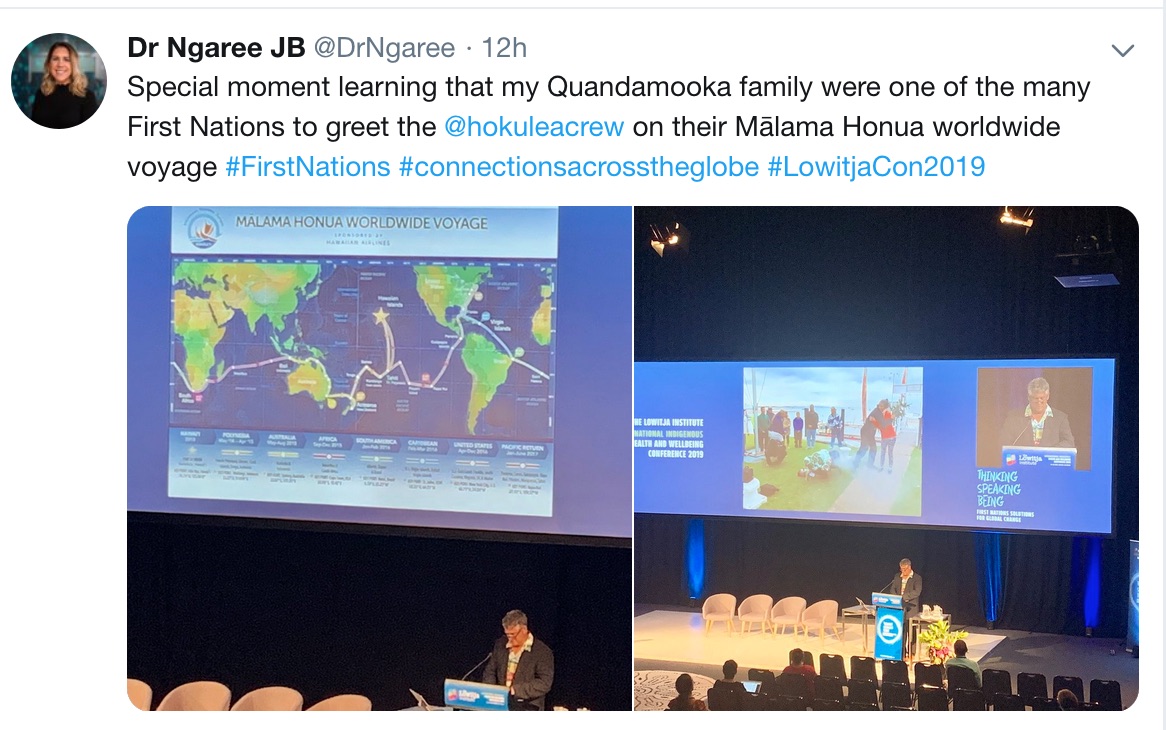 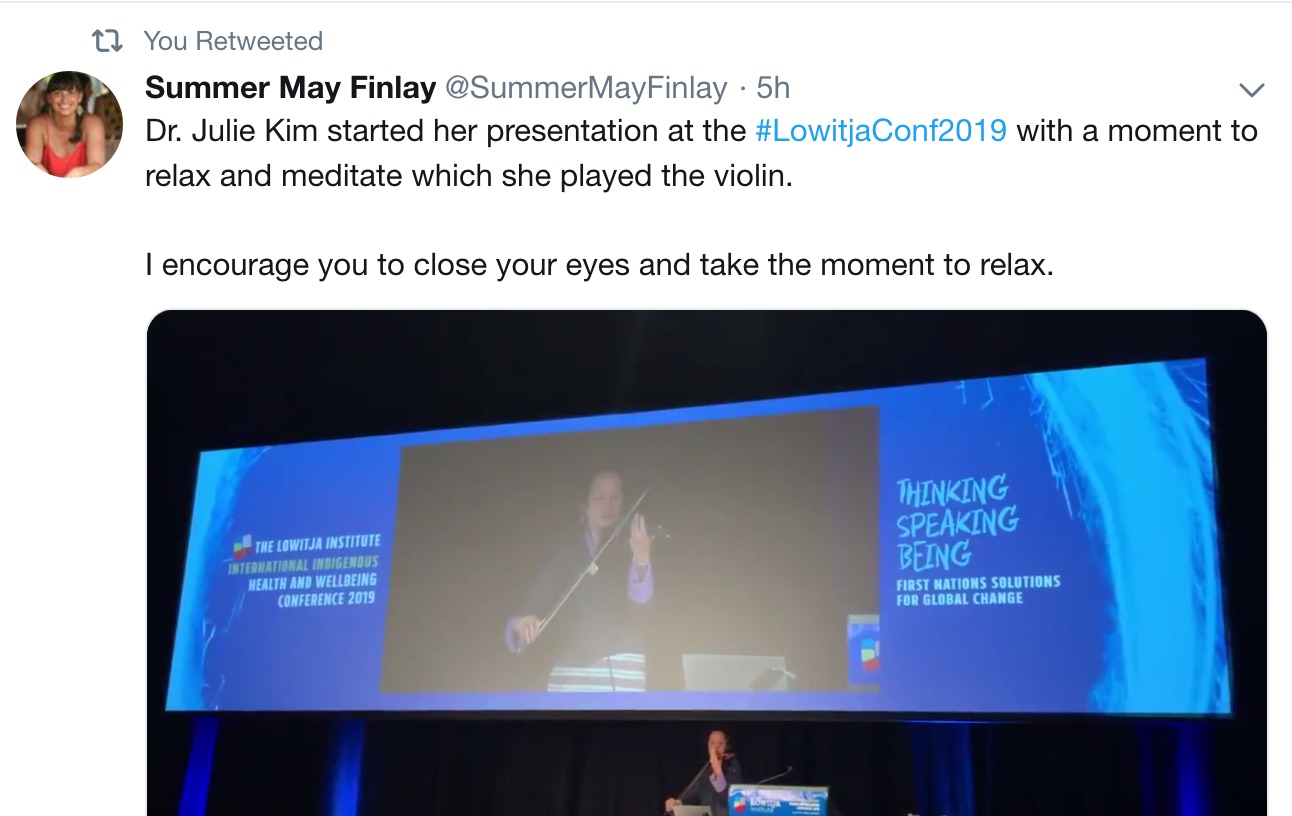 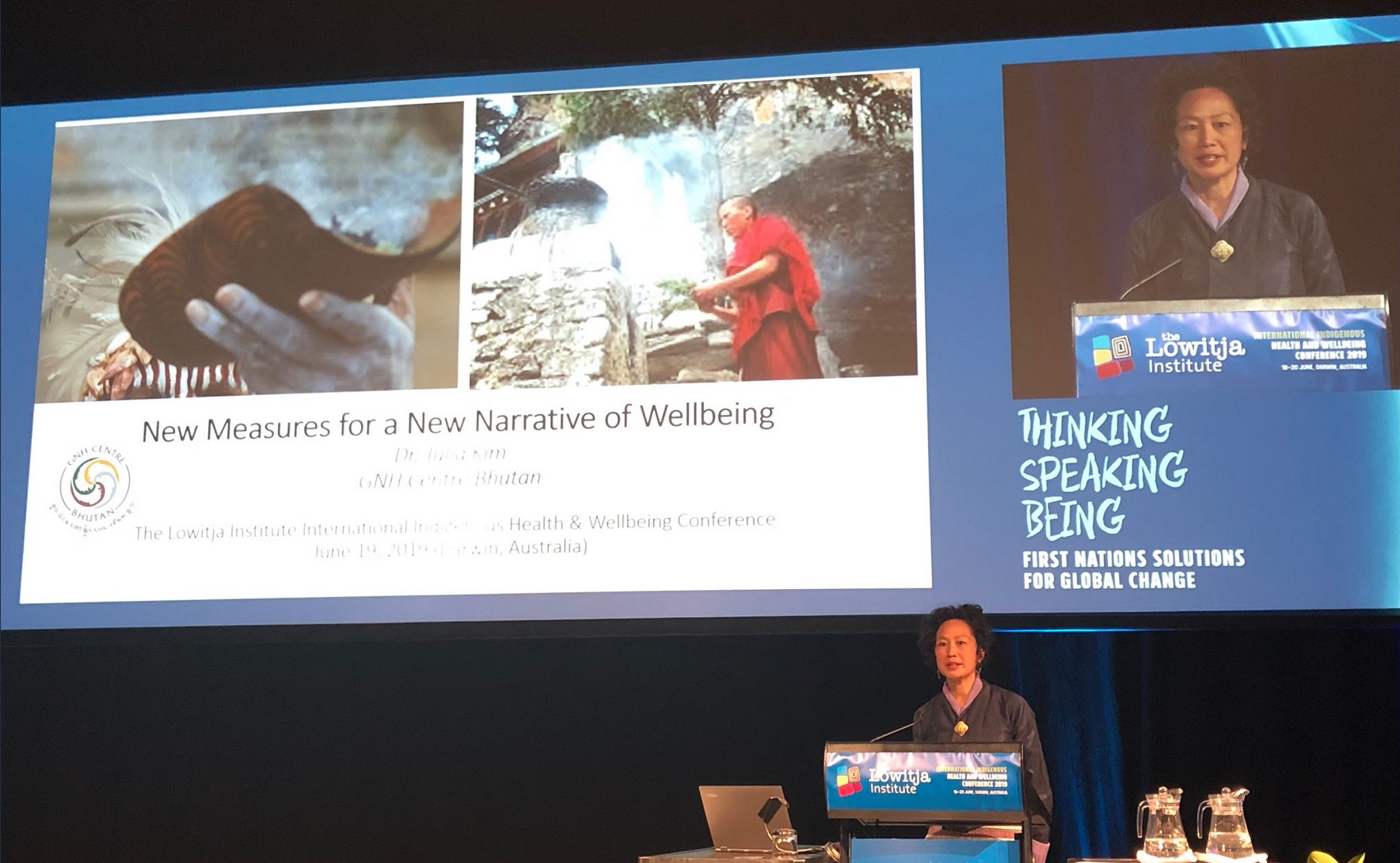 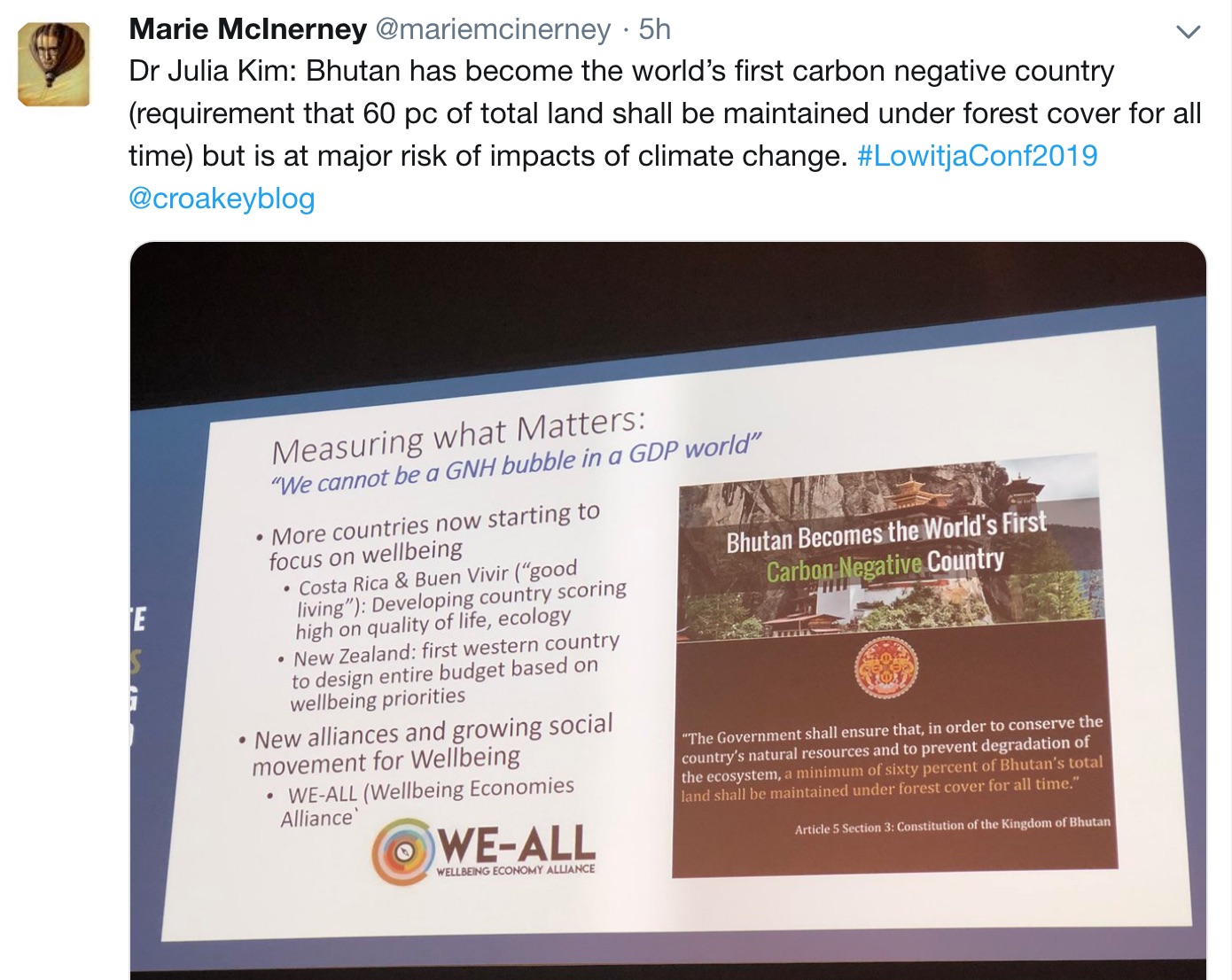 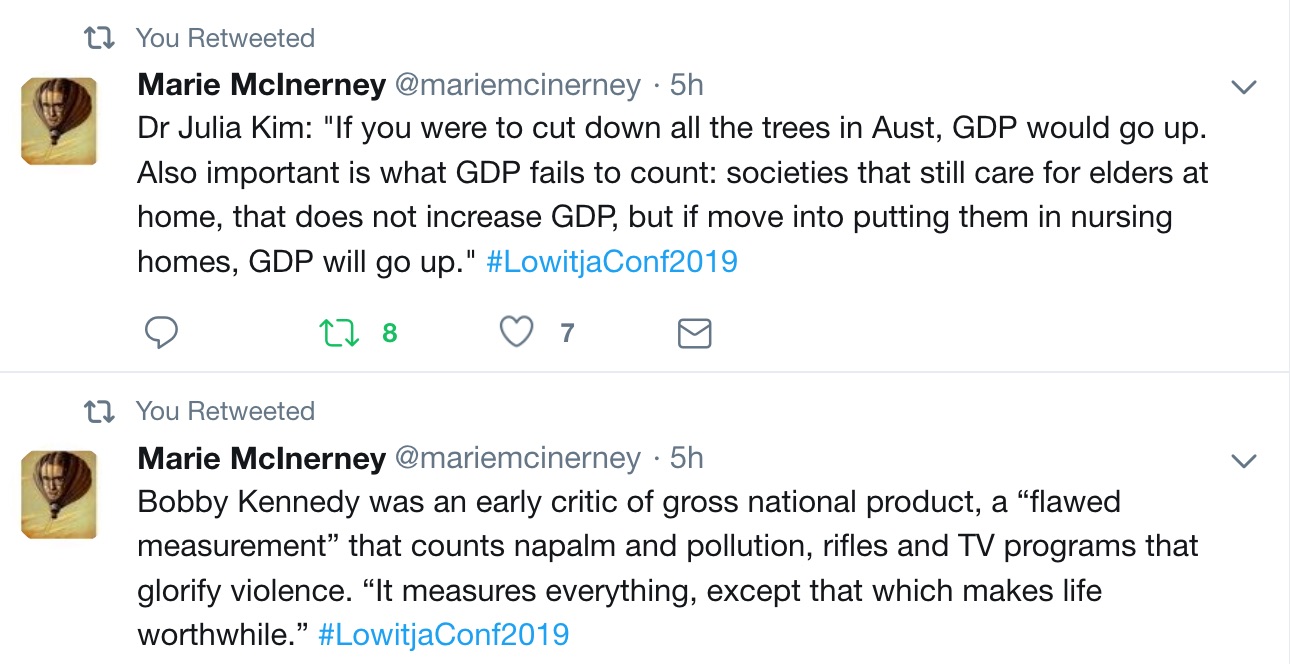 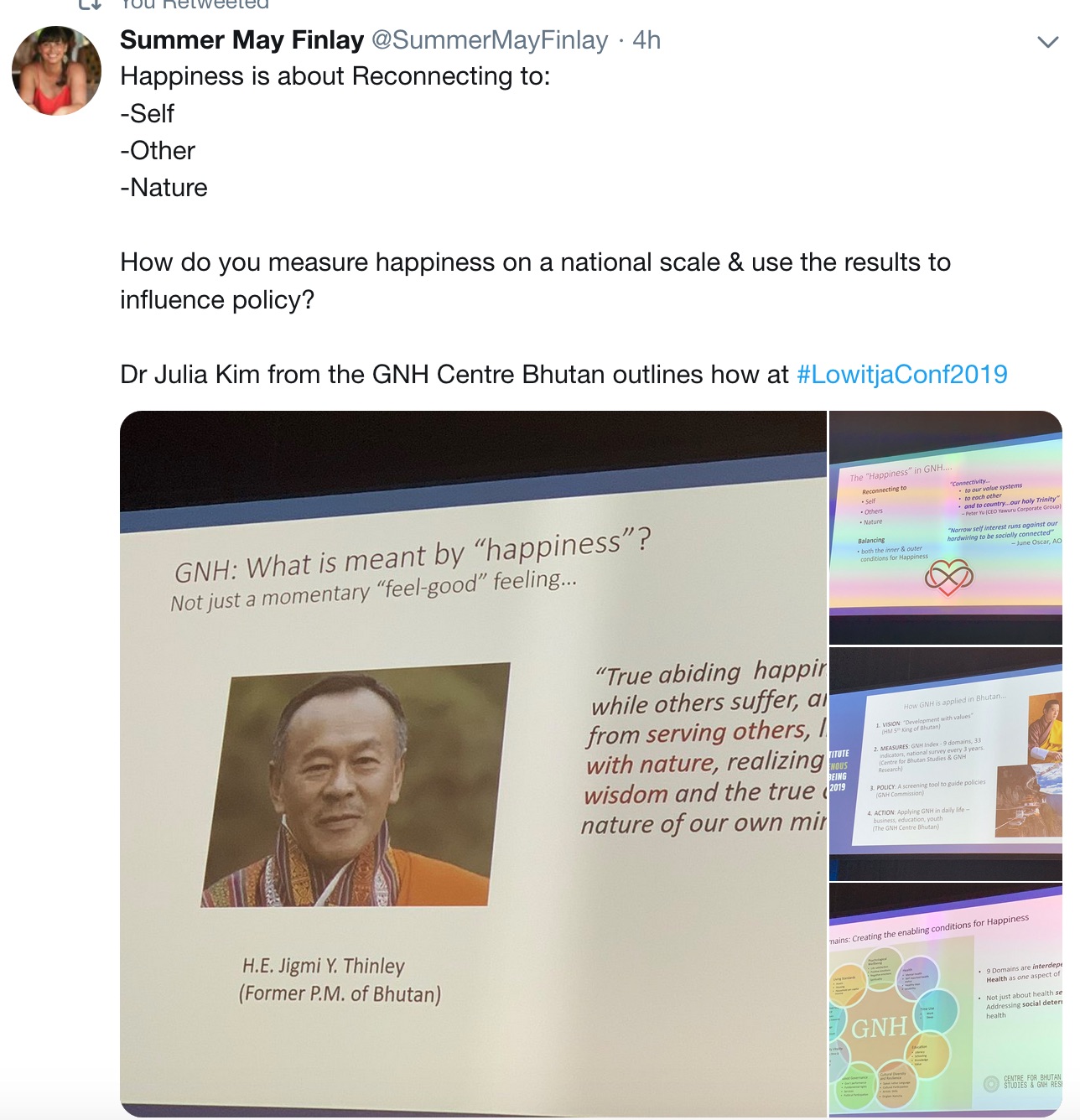 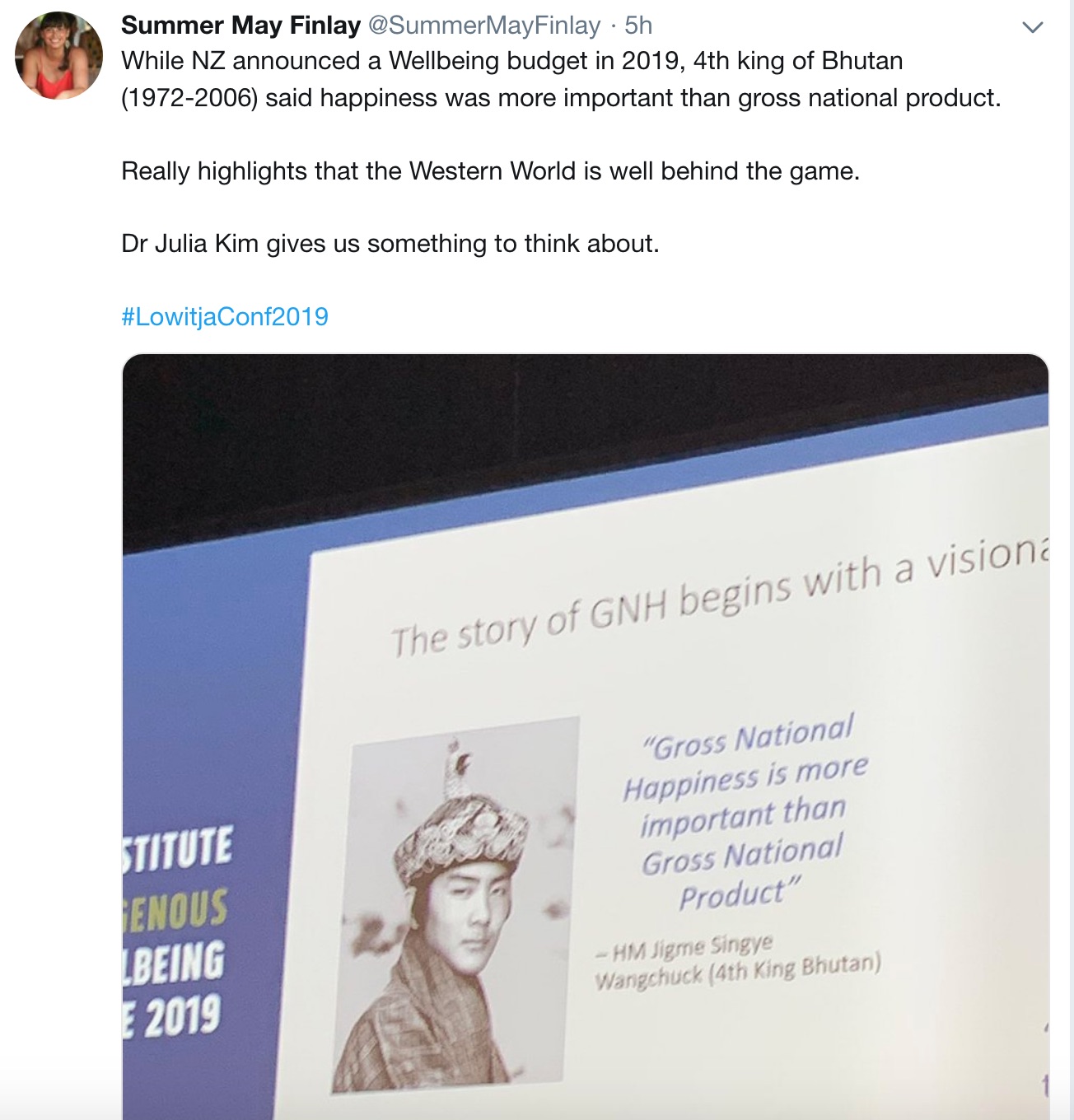 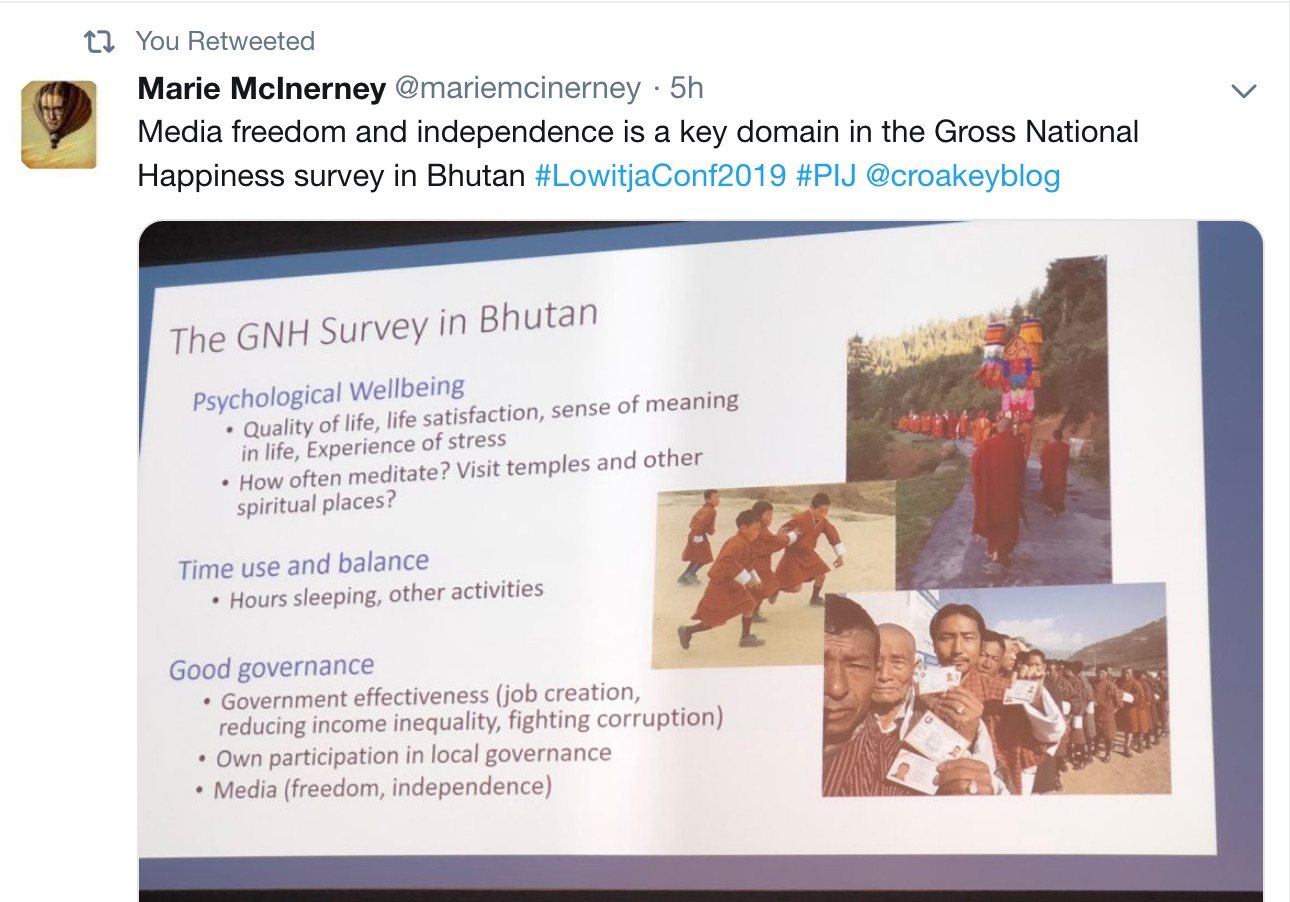 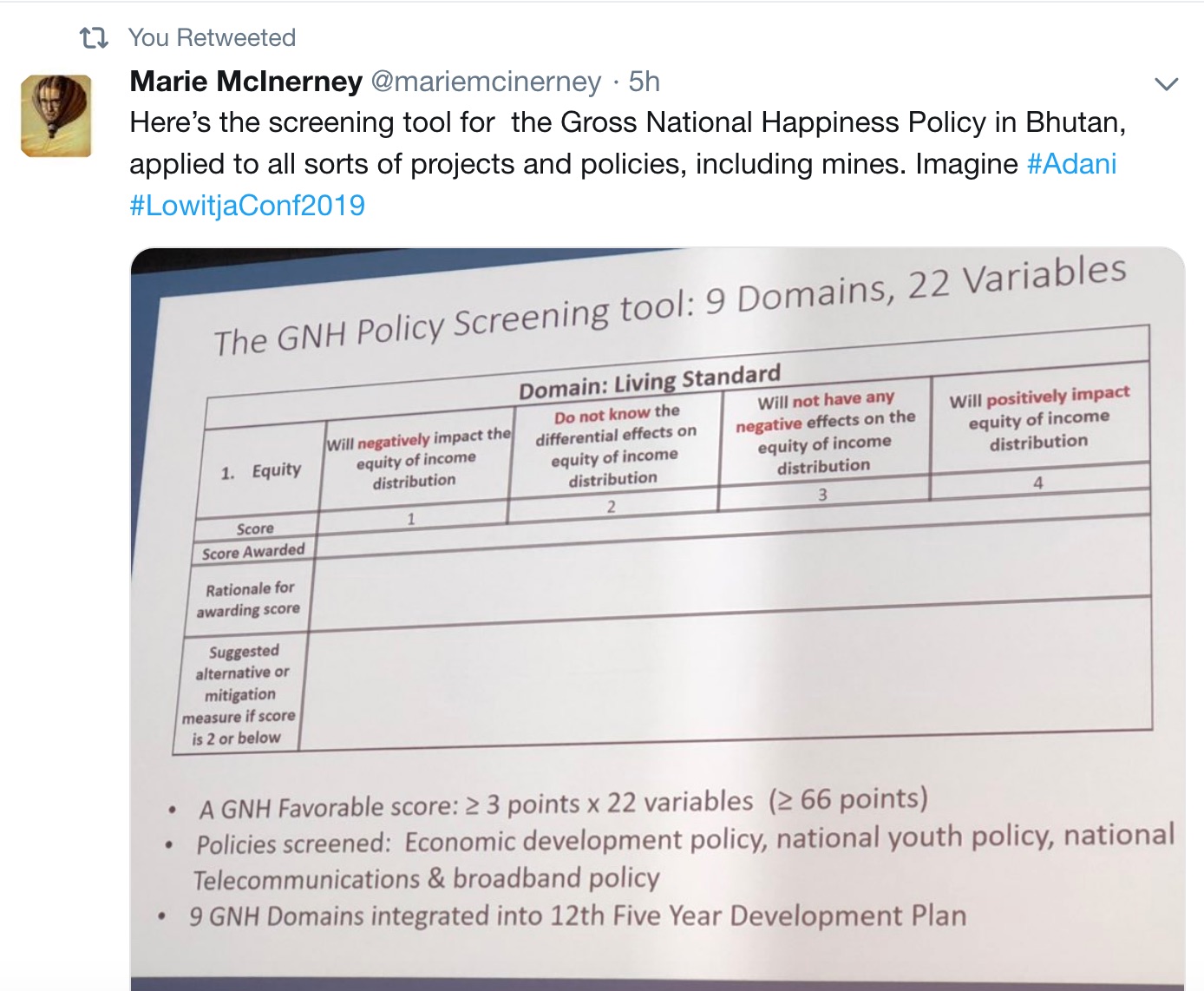 PrevPreviousMental health and suicide: The answers lies within communities
NextPresenting a vision for rural and remote health: what are the chances?Next