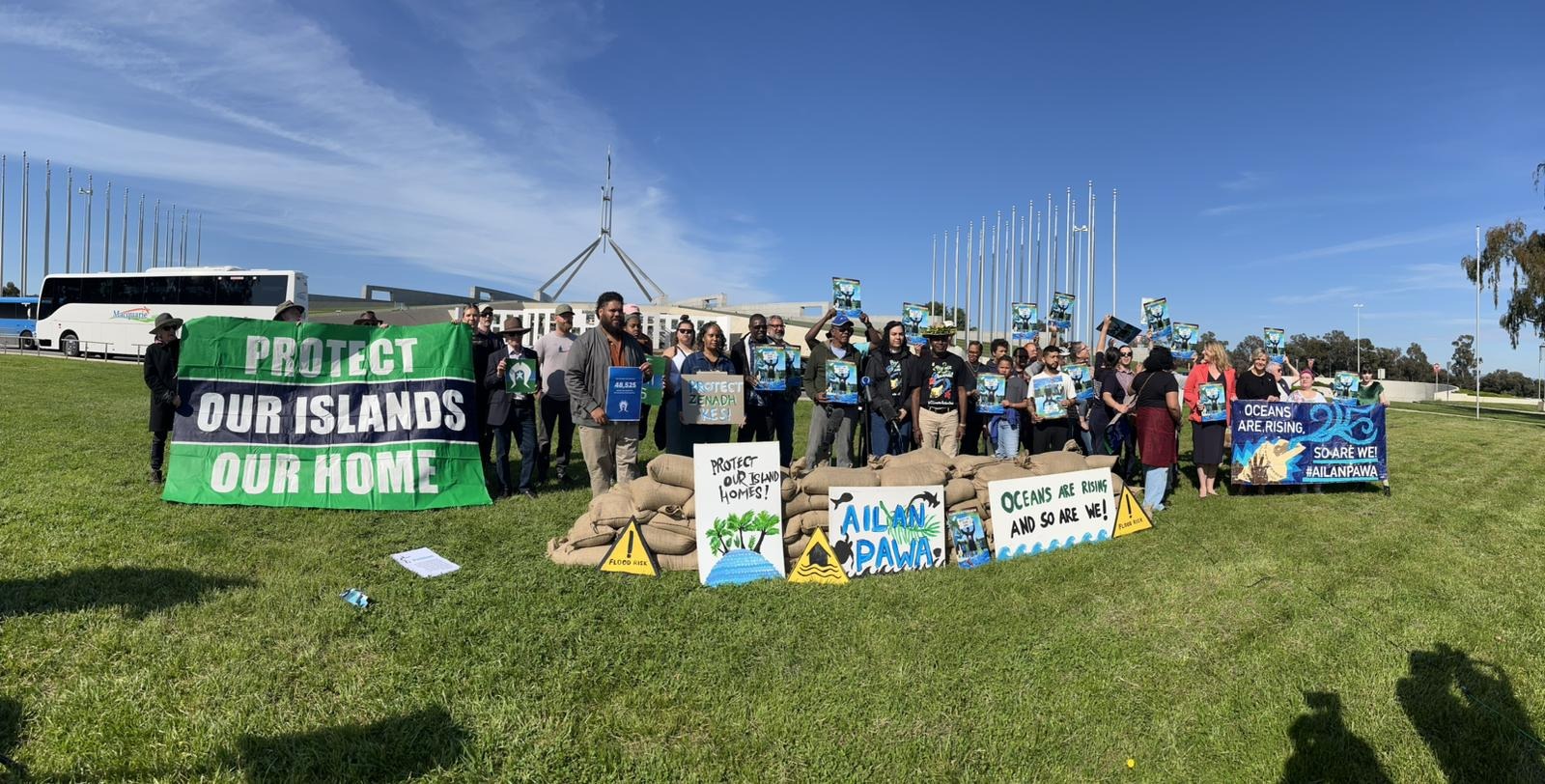 On 7 November, 2022, a mini-seawall on Parliament Hill reminded the Government of the urgent need for climate action. Photo supplied

From the Torres Strait, a call for community leaders to be at the centre of loss and damage reparations, and climate action

Introduction by Croakey: As the COP27 meeting ended in Egypt, United Nations chief António Guterres welcomed the decision to establish a loss and damage fund for vulnerable countries hit hard by climate change, while also noting that much more needed to be done.

In the article below, Sereako Stephen (Jr), an Ugaram Le man from Ugar (Stephen Island) Torres Strait, traditional lawman, traditional healer, Elder, traditional landowner and Chair of Ugar Registered Native Title Body Corporate, and academic colleagues stress the need for the Government to realise that “traditional Island wisdom, knowledge and understanding is the most valuable tool for climate change adaptation”.

We invite you to walk with us in a movement of the Australian people for a better future
(Uluru Statement of the Heart).

A unique opportunity for all Australians to walk together is provided by a momentous decision in September 2022.

Rejecting the former Morrison Government’s request to dismiss the complaint, the UN Committee determined that Australia had violated its human rights obligations under the International Covenant on Civil and Political Rights (1966), through inadequate climate change mitigation and adaptation to protect its  people of the Torres Strait Islands.

Lying in the waters that separate the continent of Australia and Papua New Guinea, the breathtaking Torres Strait Islands are the homelands of Australian peoples who have practised their unique culture in harmony with the sea for many thousands of years and, like many Pacific Islands, are among the most threatened places in the world.

This landmark legal decision offers hope that Australia will urgently respond to the rapidly closing window for action to limit global warming to below 1.5, or even 2 degrees. It beckons leaders with vision to recognise that we need a new normal, abandoning historical amnesia, structural racism and fossil fuel addiction. Instead, leaders must walk respectfully with Indigenous Australians to heal our fragile, finite planet and protect their future on their homelands.

The UN decision pressures the government to act domestically, and, coming directly on the heels of a magnificent speech by UN Secretary-General António Guterres to the General Assembly in painting a picture of our global reality:

“We have a rendezvous with climate disaster… But the poorest and most vulnerable – those who contributed least to this crisis – are bearing its most brutal impacts. Meanwhile, the fossil fuel industry is feasting on hundreds of billions of dollars in subsidies and windfall profits while household budgets shrink and our planet burns.

“Our world is in big trouble. Divides are growing deeper. Inequalities are growing wider. Challenges are spreading farther… There is another battle we must end – our suicidal war against nature. The climate crisis is the defining issue of our time. It must be the first priority of every government and multilateral organisation. And yet climate action is being put on the back burner – despite overwhelming public support around the world.”

The UN Torres Strait decision adds to Australia’s past failures to take responsibility for its contributions to climate change, global biodiversity loss and social and economic inequity.

Just as Australia was founded from 1788 upon the dispossession and violation of human rights of the Aboriginal and Torres Strait Islander peoples, fossil fuel industries have colonised the atmosphere, aided and abetted by Australian governments, to drive colossal environmental injustices. These industries, led by the Carbon Majors, are favoured in regulation, legislation, extinguishment of Native Title and power over both Indigenous and non-Indigenous communities.

“Fundamental human rights are being violated, and we are measuring climate change not in degrees of Celsius or tonnes of carbon, but in human lives.”

Sadly, there has been little progress since Glasgow COP26, where developed nations agreed to mobilise USD$100 billion annually for developing countries to finance adaptation to save lives and cover loss and damage. Australia has been urged to rejoin the Green Climate Fund after withdrawing in 2019.

How must the Australian Government respond to the Torres Strait plight?

On October 28, the Torres News announced a $15.6 million commitment by the Federal Government to establish a Torres Strait Climate Change Centre of Excellence.

Torres Strait 8 claimant, Regional Councillor and Native Title Corporate Body Chair of Warraber, Kabay Tamu said a Centre had not been discussed with him and that “we’re very pleased about it… but this is only a start”.

On November 7, Chair Tamu and others built a mini-seawall on Parliament Hill to remind the Government of this urgency (see feature image).

Our team from three universities and Gur A Baradharaw Kod have been asking that question for two years, completing a Health Impact Assessment (HIA) on Climate Change and Health in the Torres Strait.

We recently undertook feedback visits to five of the 17 Torres Strait Island communities to workshop reports produced by 35 University of Sydney students who spoke to Elders, leaders and community members during the latest of four Service Learning in Indigenous Communities projects under the Queensland Department of Environment and Science Sector Adaptation Planning (SAP+) initiative on climate change adaptation in April 2022.

Each step of the HIA’s Screening, Scoping, Profiling and Assessment and Management involved extensive collaboration with Torres Strait organisations and communities. Regional level reports were provided to the Torres Strait Island Regional Council in 2021 and 2022, and five community reports will officially handed to Registered Native Title Body Corporate Chairpersons at the regional meeting of Gur A Baradharaw Kod Sea and Land Council membership in December.

In the recent feedback visits, we heard people say that the UN decision lifts all Torres Islander peoples’ voices – explaining how climate change is threatening the very essence and existence of their lives in their homelands. Like the eight Torres Strait Islander claimants, they shared how this endangers all their identities and cultural practices, symbolised by the graves of their ancestors are being washed up through tidal increases.

During our feedback visit to Saibai Island in early October, we met Mr Paul Kabai, who together with Mr Pabai Pabai from Boigu Island, are claimants of another legal case that is suing the Commonwealth for failing on climate change. Mr Kabai explained that for Saibai:

Inundation is our biggest problem, water coming in both ways now. We don’t want to be climate change refugees… We’ll need another seawall in 5 to 10 years. We need better infrastructure to manage inundation.

Our team leader, Mr Sereako Stephen, Chairperson of Ugar (Stephen Island) Registered Native Title Body Corporate, states: “We must raise awareness and educate First Nations peoples living in the region to understand that climate change is not only about rising sea levels and seawalls. It’s also about food and water insecurity, vector borne diseases and extreme heat that will add enormously to our peoples’ poor health status and increasing our vulnerability.”

Despite experiencing oppressive heat threatening health and infrastructure, these communities have been completely left out of renewable energy transitions and still rely on expensive diesel to power water desalinators and cool their poorly designed houses.

However, the loudest message we heard is that the Government must realise that traditional Island wisdom, knowledge and understanding is the most valuable tool for climate change adaptation.

Team leader Stephen explains: “The strength of Common Law Native Title Holders is growing, lifting the rigid and inappropriate government structures and demanding Voice, Treaty and Truth. To honour the UN Committee’s response, the Government must be engaged in meaningful and practical partnerships with communities; to assess their needs and hear their voices. Decades of making decisions for Aboriginal and Torres Strait Islander communities have led to much distress among Elders, local leaders and Common Law Holders”.

Meaningful engagement is based on respect, reciprocity, equity, and responsibility – simultaneously meeting the need for communities to make their own decisions, promoting spirit, integrity and cultural continuity and yielding lasting benefits.

Chairperson of the Torres Strait Regional Authority, Napua Pedro Stephen committed to working with leaders and traditional owners in the design and establishment of the Centre to ensure the embedding of traditional knowledge.

The basic blueprint for the current Australian Government already exists, elegantly put forward in the Uluru Statement towards a voice in Parliament:

We invite you to walk with us in a movement of the Australian people for a better future.”

Australia’s response to this invitation may ultimately determine whether adaptation is possible or if, as stated by UN Secretary General at the COP27 opening, we continue on “a highway to climate hell, with our foot still on the accelerator”.