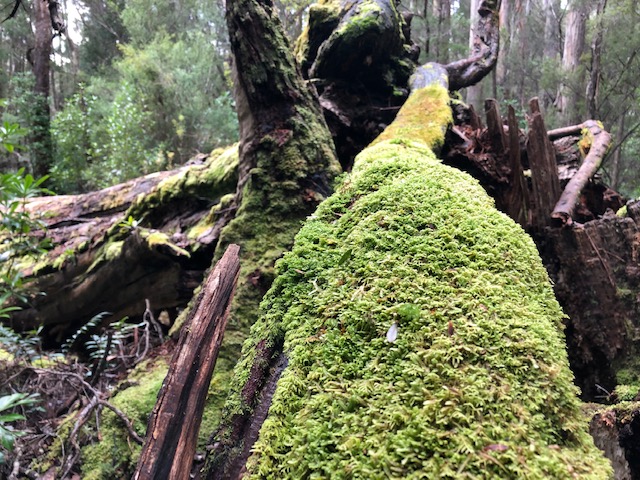 Amid decay, the possibility of beauty and growth. Photo by Melissa Sweet, lutruwita, Tasmania.

From this cry of anger, a call for listening and transformation

Many in the health sector and more widely are worried about the wellbeing of young people in the face of a climate crisis and environmental degradation, the pandemic, growing inequality, and unsupportive, often directly harmful and punitive policies.

Below, Imogen Senior, an 18-year-old student and a youth activist with Plan International Australia, shares her dreams for a “world where everyone has a role and a voice”, and there are reasons not to feel hopeless.

Senior is speaking at a webinar today for the launch of Plan International Australia’s new youth-led research report, A Better Normal: Girls Call for A Revolutionary Reset.

This article is published as part of the new #CroakeyYOUTH series, which seeks to provide a platform for the voices of young people.

I have been angry at all our governments and those in power for a long time. I have been angry at the world, its billionaires and its forgotten children, its manufacturing of fear and its systems that keep power in narrow avenues of wealth, masculinity, whiteness, since forever. Its history of genocide and thieving and its future of climate chaos and white men with their fingers clinging to nuclear weapons.

I have seen and heard of snippets of the structural pain that seeps through biased structures into our private lives in a world like this – the worn-down women with little autonomy over body, sexuality, finances, the hopelessness of workers, the modern murder of First Nations people by colonial forces.

As ministers with free Arts degrees double our university fees, we see this elitism – that arts and humanities, disciplines that support interrogation of the state and its power, are reserved for those who can afford it, with others funnelled into job factories. As 3,000 residents are placed in police-enforced lockdown, the government claims it is due to their vulnerability – the very vulnerability that it creates and perpetuates with its neglect and stigmatisation.

As the ABC’s funding is cut, as mining executive politicians make decisions that doom our future, as white politicians condemn protests from people who have been oppressed, murdered, and forgotten by their colonial governments, we see that they do not care, and cannot listen. In their $270 billion defence plan, the Government has proven that they do have the money to be helping dismantle oppressive structures, to have a welfare system that leaves no one behind, to fund the transition to renewables, to extend free healthcare to dental and more mental health services, to have free university, to make a new world. And yet they do not.

The hopelessness of this future can be pervasive. I know this is not the world, the system, the planet that I want to inherit, to pass onto my children. I know young people are scared and angry.

More beautiful than this

But make no mistake, we know what we want our world to look like. We can feel it in its peace, its compassion, its hope, excitement and security. For as long as I have been angry, I have been dreaming of this new world. And, collectively, young people are prepared to fight for it, vote for it, campaign and research for it.

Why should youth be listened to?

Most obviously, because it is our future that is being affected, influenced, ruined, by old men in power. This is the society and system and planet that we will inherit, and we want it to be fair to us, and for us to be fair to it.

But the need to listen to us is bigger than this, more beautiful than this. We should listen to youth because youth have an unbridled hope, an untamed passion for what we want to see in the world, an openness to new ideas and learning and people. This is why I surround myself with young activists, because it renews so much hope that the world can get better. I know that as a young woman, I have ideas that are new and valuable and exciting, and I know that these should be heard.

But I know that everyone has these ideas. No one person’s knowledge, voice, dream, is enough – changing the world is collective, and at its heart lies a capacity to listen. I have learnt that for every pain I feel while sitting as a woman, there are millions I do not see or feel because of my white skin. For every frustration at men’s lack of understanding, there is frustration directed toward my ignorance. I have learnt I must educate myself, have uncomfortable conversations with family members about racism, and that this is not enough – I have so far to go before I am actively anti-racist. And so, I know that while my speaking can make change, my listening changes me. And your listening will change you.

We want to show you the world we want to inherit, and for you to work with us on how to get there. Of course, we’re not policy experts yet, but damn, do we have a dream. This dream must be amplified, yes, but also implemented and its words given weight.

This is how a world radically improves – by listening to its vulnerable, its oppressed, and removing structural barriers to institutionally redistribute power to the powerless. The world improves through compassion in hearing the voices of the angry. Anger is a raw indicator, of injustice, personal pain and structural violence – pointing to something not right.

We must acknowledge young people’s anger and transform it into passion, into change, until there is peace instead. Please don’t call me naïve. I am surrounded by passionate youth who continue to find hope in a different future and will fight for it.

I’ve been working with Plan International Australia this year as part of their Youth Activist Series – a group of some of the most passionate and inspiring people I’ve had the privilege of knowing. I feel like we can make change, like my voice is being heard, but personally, a lot of what I’ve been doing recently is learning. I’ve learnt so much about listening and knowing when my turn is to speak, about the inherent privileges I have with my white skin, my class, about how we can restructure the system to ensure those intrinsic biases are expelled.

Our latest research project recognises that we are in a time of great change. We have been interviewing young women and non-binary people from around the globe about the world they want to see, viewing COVID-19 as a ‘portal moment’ to catalyse real, radical and structural change, having exposed so many flaws within our system, from our social welfare systems to education to healthcare to climate change to tax cuts for the rich.

Collectively, with these women, we produced a vision of a possible world, outlined in a report that will be sent to powerholders around the globe. In this new world, the air feels different, work different, our love and our streets and our home different. It includes fresh baked bread, back gardens, sunlight, and hobbies. Visions of kindness in leadership and in life, guaranteed shelter and food, fewer work hours, loved work that gives to the community. This is next to visions of new crisis management to ensure an expert in every crisis, and not one billionaire, and an economy to support the people and workers, not the other way around. A world where everyone has a role and a voice, with inclusivity in power and a value in just being human.

We broke this vision down into six pillars: inclusivity and equality in power, freedom to just be human, protection of rights and access to resources, education to be citizens of the world, climate justice, and gender justice. We have developed policy recommendations to get us there, developed by people who listened.

I know that two things are key to this new world: security and freedom.

Security in finances, on the street, in work and in relationships, in healthcare and education, and in the planet’s future, so that we have minimal fear for or anxiety over the next day, week, year, century.

This is needed to have true freedom – freedom to slow down our lives, experience joy, to contribute and learn. We must be free from discrimination, have control over our choices, and autonomy and agency, of course, but also have the means to make these choices. Not the neo-liberal freedom that refuses to acknowledge deliberate structural barriers that restrict choice, that create vulnerability and violence and crime and need, but an active working towards the dismantling of systems that push people towards lives they do not choose.

A blossoming of new systems created by the people who need them, specialists called to every emergency in the knowledge that they are equipped to protect people, to deescalate pain, to deal with trauma. An autonomy that is aware of its place in community and its duty to others.

This is an article written by a voice you might not listen to often, in its youth, its femininity, its queerness. But I’m feeling the pressure in writing an article like this, because I cannot, should not, will not, claim to be the voice of all youth.

We never do consult youth in policy, in opinion, but I don’t want us to be homogenised, where my white voice is taken as a representative, because this is a familiar story. A majority gets to have disparate views, intellectual debates, and consider a voice from a minority that is assumed to be universal.

Here, you have one voice. It is a white one. It is the voice from a young woman with doctor, writer parents. I want it to be heard, but not exclusively. Listening to people, young people, marginalised people, brings new hope, new perspective, new joy. Dismantling their access to power brings change. And so, I listen. Then I act. We will have our world.

Imogen Senior is an Arts student studying Politics and Sociology at the University of Melbourne, planning on completing a post-graduate Juris Doctor law degree. She is a Youth Activist with Plan International Australia – a program which seeks to elevate and campaign youth voices, and train them to advocate for and build a better world for all girls, young women and non-binary people.