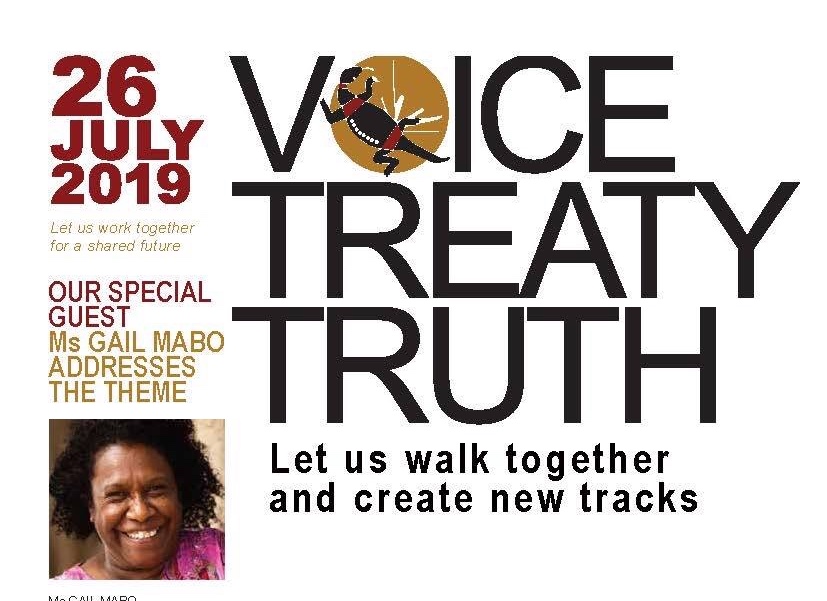 *** This article was written by Ruth Armstrong, on behalf of Croakey Professional Services. It was sponsored by Gandangara Local Aboriginal Land Council. ***

Speaking during NAIDOC Week on ABC’s The Drum, CEO of the National Aboriginal Community Controlled Health Organisation, Pat Turner, described Prime Minister Scott Morrison’s statement, that there would be no constitutional amendment to enshrine Aboriginal and Torres Strait Islander voices to Parliament as “a very worrying sign,” given that the Liberal party had previously committed to a full examination of the issues and options for constitutional recognition.

Commenting on NAIDOC Week’s rollercoaster of public debate, she told the panel,

There is no reform we’ve ever achieved that we haven’t struggled for for decades, and finally got governments to do something about it. There is not one reform in this country [for improving out situation] that hasn’t been through that process.”

The discussion around constitutional reform continues. Some coalition MPs, including Home Affairs Minister Peter Dutton and backbencher Craig Kelly reportedly remain determined in their opposition to enshrining a First Nations voice to parliament, and Indigenous Affairs Minister Ken Wyatt has expressed concerns that the proposal needs to be carefully handled to ensure the success of any referendum.

Ex-deputy Prime Minister Barnaby Joyce has apologised for his premature and inaccurate characterisation of the initiative as a “third chamber of Parliament,”  while calling for an increase in rural senate positions as a possible embodiment of Aboriginal and Torres Strait Islander voices in Parliament.

An important addition to the debate, is a speech given by former Chief Justice Murray Gleeson in Sydney, in which he said the proposal of a constitutional amendment for a First Nations voice to parliament consistent with the current constitution, would not weaken the parliament, and was desirable.

His paper on the historical, constitutional and legal aspects of this topic can be found here.

Gleeson’s framework for “a voice to parliament, not a voice in parliament” was endorsed by incoming liberal senator, Andrew Bragg, in his maiden speech to parliament. Bragg also emphasised the need for “ground-up governance models for enhanced, inclusive and local decision-making on issues impacting the lives of Indigenous Australians”.

As discussions go on around the country, at an upcoming event, Gandangara Local Aboriginal Land Council in Sydney’s South West will hold their Inaugural annual NAIDOC Lecture  tomorrow night, Friday, 26 July, on the topic of Voice, Treaty, Truth.

Recently, we had the privilege of interviewing Elders, leaders and members of Gandangara Local Aboriginal Land Council about their priorities for voice, treaty and truth, as they prepared for the event.

Below we present a selection of short clips, 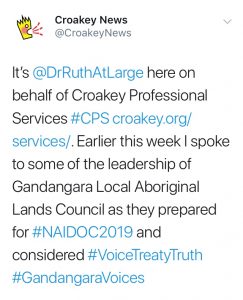 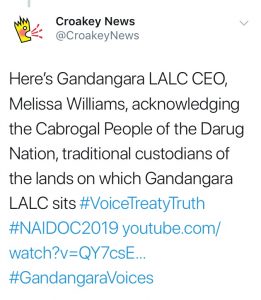 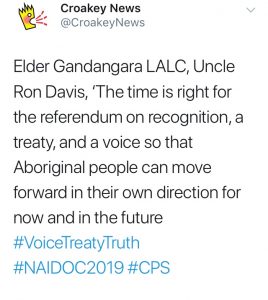 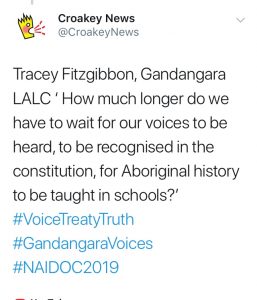 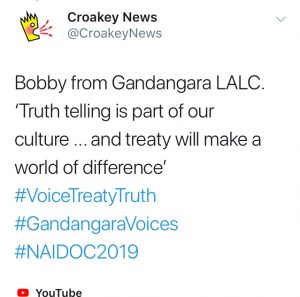 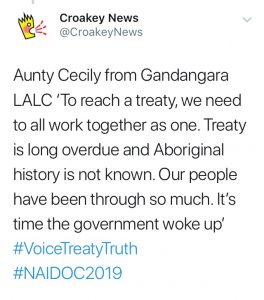 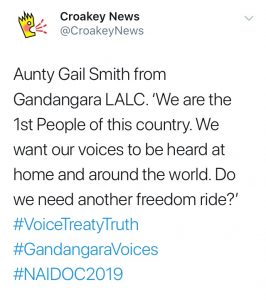 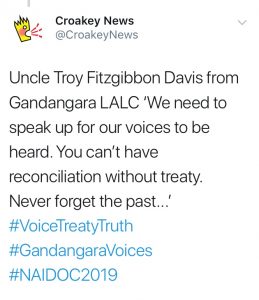 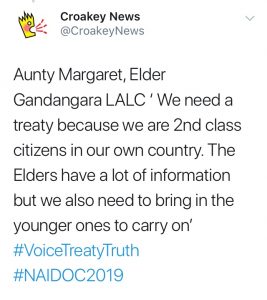 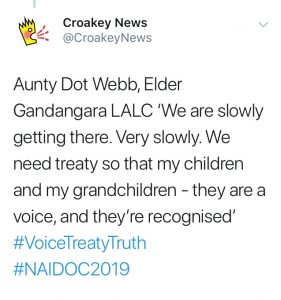 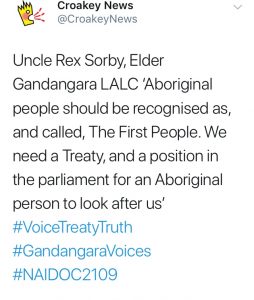 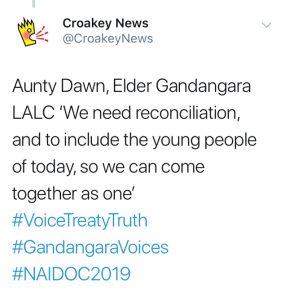 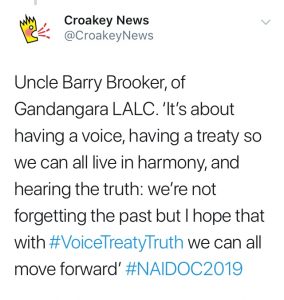 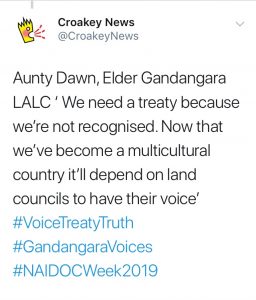 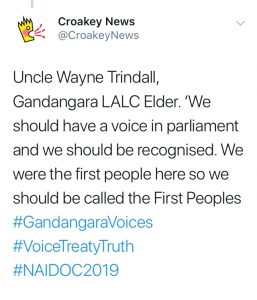 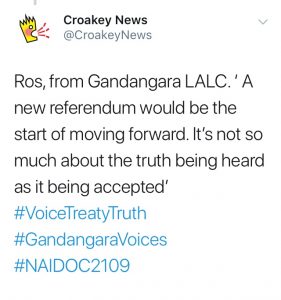 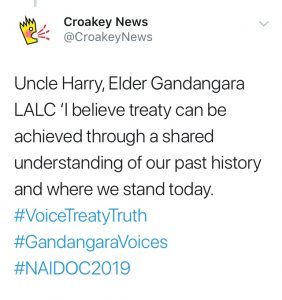 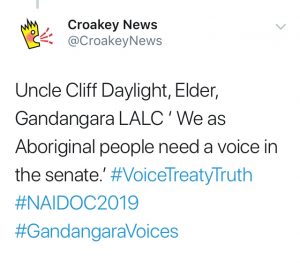 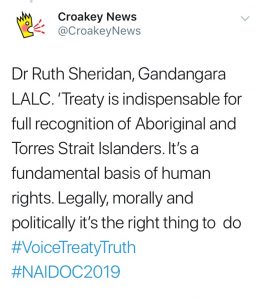 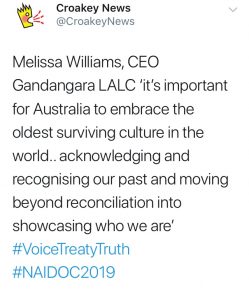 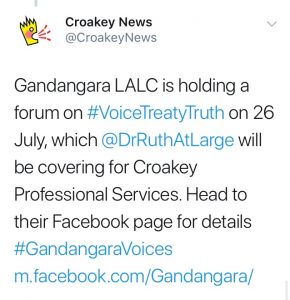 This article was written by Ruth Armstrong, on behalf of Croakey Professional Services. It was sponsored by Gandangara Local Aboriginal Land Council.