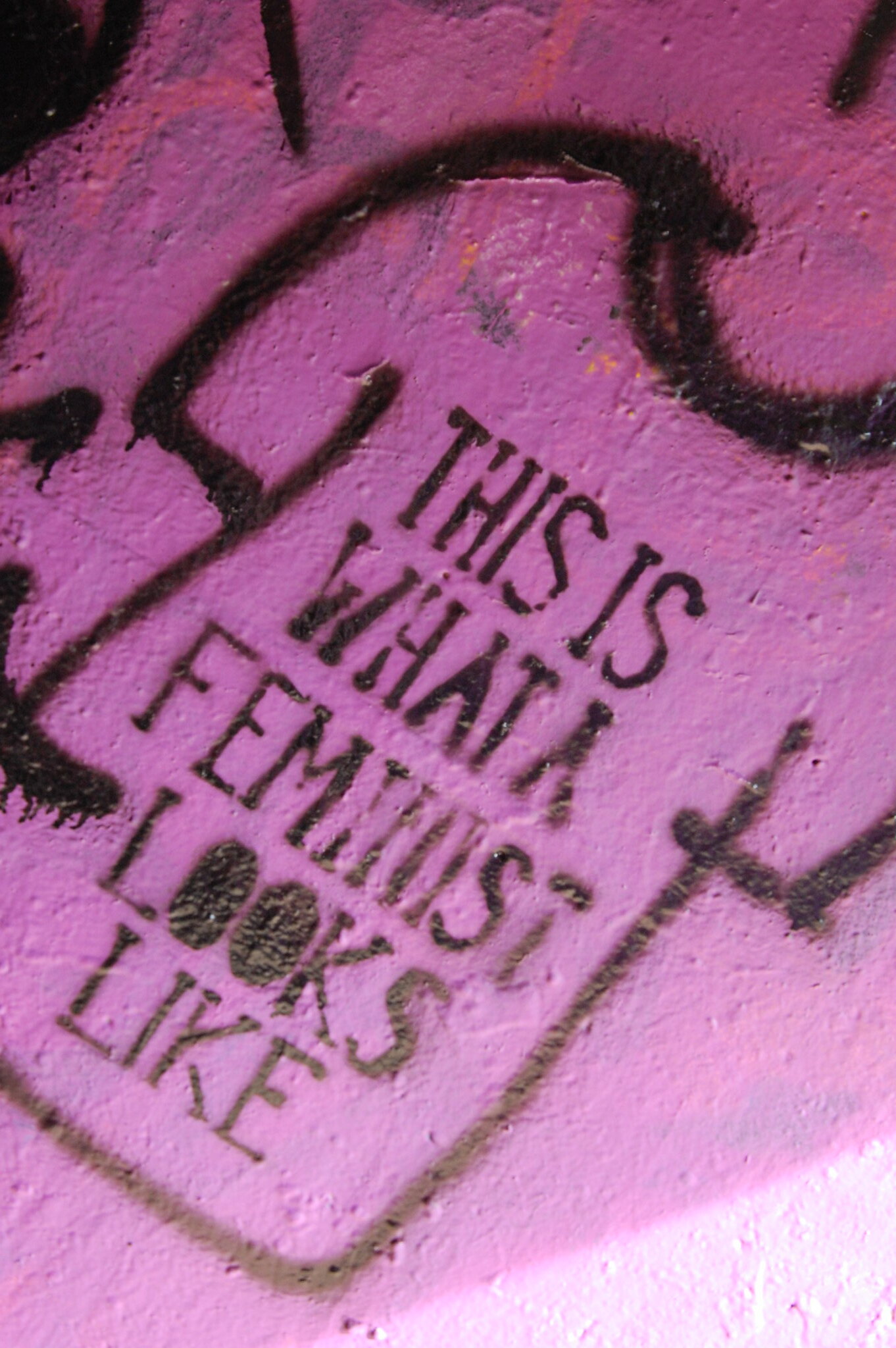 Generation Equality: Why feminism is more relevant than ever

Introduction by Croakey: The horrific murder of Hannah Clarke and her three young children last week in Brisbane has reignited debate over domestic and family violence in Australia, where it is estimated that one woman a week is killed by a current or former partner.

Family violence campaigner and former Australian of the Year Rosie Batty issued a heart-rending statement in the wake of the murders, calling for leadership and family law reform:

This unspeakable act of violence should give pause for all our elected leaders to think deeply about their leadership on this epidemic. This is the most pressing issue of terrorism our society faces, where at least one woman each week is murdered. It is too painful and too confronting for us to even face and acknowledge how many children are murdered by an abusive parent, but we do know that at least one in four children is affected by violence in their home, and the trauma they experience will impact their lives forever.

A critical challenge we must now address, as a nation, is the family law court system and the significant part that it plays in keeping children safe. The decisions that are made through this system impact on the wellbeing of children dramatically and have the potential of placing children at further risk of harm or enabling them to reach their potential without fear and trauma impacting their development. The current family law inquiry has the potential to weaken existing safety protections in the system, when it is required to do significantly more.

I am also deeply concerned by some commentary from people in authority and the media that have presented the murderer as a loving father. A loving parent never considers murder as ever being an option or a solution. No one is ‘driven’ to murder no matter the circumstances or situation that they find themselves in. Murder is a decision that is deliberate and driven by the need to exact revenge and achieve the ultimate act of power and control. Although mental health, drugs and alcohol can be contributing factors, violence is always a choice and one that we should not continue to make excuses for.”

Batty’s son Luke was killed by his father at cricket practice in 2014. She said she had been “deeply affected” by the murder of Clarke and her children and would not be commenting further.

“This horrific violence is beyond our imagination, comprehension and understanding. How could this happen? And yet it does. And it keeps on happening,” she wrote.

In this piece for Croakey, written ahead of next week’s International Women’s Day celebrations themed ‘I am Generation Equality: Realising Women’s Rights‘, doctor Lea Merone argues that violence against women is a major public health concern and underscores why, in 2020, feminism is as essential as ever.

International Women’s Day (IWD) is a day to celebrate the achievements of women, raise awareness of gender biases that remain prevalent in modern society, and take action for equality.

This year’s theme for IWD is ‘Generation Equality’, imagining a world where every woman and girl has equal opportunity to realise their potential, with a particular focus on education and income.

This is not a new notion for feminists who have been advocating for equality in different forms and contexts for over a century now. From the first wave suffragettes who fought for women’s suffrage, through to the second wave feminists who fought for women’s liberation and social rights in the 1960s and 70s (rights which are still being fought for in certain contexts); to the third and most recently fourth wave feminists who focus on modern issues of intersectionality (race, class, disability, ethnicity, culture) and international feminism.

Whilst strides have been made towards equality throughout these periods, women remain far from equal both in the Western world and globally. Feminism remains as important an issue today for contemporary women as it did for the brave and pioneering suffragettes at the turn of the twentieth century.

Violence, rhetoric and the pay gap

One of the most prevailing feminist issues today is men’s violence against women. Violence is a clear manifestation of  historical gender-based power imbalances, and it occurs most frequently in societies where men have control over finances, domestic life and decision making. It is also a major public health problem.

Sexual violence, in particular, has been highlighted in recent years by the #MeToo movement, where women have shared their stories of sexual assault and oppression by men and advocated for change. The #MeToo movement asked men to become better campaigners for women’s rights, to call out sexist attitudes and to stop condoning violence against women.

Whilst the success of the movement saw around 200 powerful men brought to justice, of note was the continued victim-blaming of women within the media, and a continuation of discrediting discourse rooted in the inequality of women in modern society.

The language of this discourse reinforces women’s place in society, rendering them invisible or unimportant. Rhetoric can be used to infantalise women, to victim-blame and to normalise violence against women. The media perpetuate these issues – murdered women referred to as “nagging” in media headlines, violent men described as “quietly spoken” until “pushed” by their female partners.

This framing continues to oppress, silence and blame women while upholding the dominance and superiority of men. Vernacular almost defines the oppression of women, from male-centric language to the use of colloquialisms of female genitalia as insults.

Perceptions of women in society and what it means to be feminine are also powerful tools of oppression.

As Naomi Wolf states in her book The Beauty Myth, How Images of Beauty Are Used Against Women, beauty is imperative for women, but not for men, and has thus been used as a political tool against feminist movements and women’s advancement. Valuing women largely by their aesthetic ensures they remain vulnerable to external approval. It also ensures that the most experienced women (generally those of middle and older age) are devalued by the “deterioration” of their beauty, allowing power to remain with men, who are not subject to the same standards and are considered to have intrinsic value beyond the cosmetic from the outset.

Perceptions of women also impact on their careers and earning potential.

In Australia, whilst women represent 47 percent of the Australian workforce, they represent just 17 percent of leadership positions such as CEOs and only 30 percent of management positions. The gender pay gap sits at 23 percent.

Almost 10 percent of women report insufficient hours of work and 72 percent of female employees work part-time. These figures are in spite of the fact that research demonstrates utilising female workers improves the economy. Additionally, women are generally more qualified than their male counterparts.

The gender gap is not limited to employment. There are significant discrepancies in medical care. Women tend to wait longer than men for diagnosis, pain relief, and are then more likely to be misdiagnosed or discharged during serious medical events.

This is partly a result of the gap in medical research; historically women were excluded from participating in research because of their menstrual cycles and fears of harming future pregnancies.

It is also possible that continuation of the “hysterical female” discourse contributes – the outdated and inaccurate characterisation of women as overly emotional and irrational. This means that a woman often has to prove herself to be as sick as a man before being taken seriously (the so-called Yentyl Syndrome).

A criticism of modern feminism has been the failure to acknowledge the different forms of oppression experienced by women in low and middle income countries (LMICs). Feminist issues are broadly observed the world over, however women in LMICs suffer the greatest inequalities.

The failure to acknowledge this can result in oppression of women in LMICs by Western feminists.

The feminist focus in LMICs is still very much on basic women’s rights. It is estimated that every year 6 million women go missing globally, with sex-selective abortion, infanticide and maternal perinatal death making a significant contribution to these numbers. In some places, women are still denied some of the most rudimentary adult freedoms: for example, Saudi Arabian women have only recently been granted permission to drive cars.

The education of girls and young women is fundamental to eliminating poverty. Despite this, globally 130 million girls are out of school and 15 million primary school age girls will never attend.

A key obstacle to enrolling and keeping girls in school is child marriage; annually 15 million girls under 18 years enter wedlock. Additionally, menstruation can be a barrier for girls in developing countries in attending school: lack of access to suitable bathrooms and period poverty can confine adolescent girls and women to the home.

Another notable form of oppression, and a violation of the most basic of human rights — to be free from torture — is female genital mutilation (FGM). FGM is a traditional practice in some LMICs that involves removal of the external female genitalia without medical indication. More than 200 million females have undergone FGM and around 3 million females each year are at risk of undergoing this procedure. The complications of FGM can include pain, bleeding, recurrent infection and difficulties with childbirth. The WHO has a zero-tolerance approach to FGM and works with survivors and females at risk to reduce associated harms.

As feminism moves into the future, addressing significant regressions and harms to the women’s rights movement is an urgent priority. Of particular concern is the threat to women’s reproductive rights, where some countries globally are seeing a U-turn on previous advances.

With New South Wales becoming the final state to decriminalise abortion last year, termination of pregnancy is now legal (in theory) across every state and territory in Australia. Despite this, women’s reproductive rights are under threat. Whilst few countries entirely prohibit abortion, many countries have strict laws that will only provide an abortion if the life and health of the mother is under threat, and gestational limits vary. The United States are regressing, with fears that 2020 could see the end of legalised abortion across the States. The Trump administration passed 59 abortion restrictions in 2019, and should this quiet process continue, many States could ban abortion altogether. Should America begin to cycle backwards on abortion laws, it is quite possible there will be ripple effects globally.

For feminists to secure women’s equality, intersectionality must lie at the heart of the battle. Intersectional issues such as racism and classism overlap with feminist – and socialist – ideologies. In the famed words of  Flavia Dzodan, riffing on the work of critical race theorist Kimberlé Williams Crenshaw, “feminism will be intersectional, or it will be bullshit”.

Intersectional feminism must be inclusive, acknowledging, incorporating and centering the battles of trans women. We also need to recognise the disproportionate impact of gender inequalities on women of colour, disability and lower socioeconomic class.

Feminists need to organise and advocate more effectively. A recent survey showed that fewer than 1 in 5 young women would call themselves a feminist, despite 2 in 3 believing in gender equality as an important issue. Many associate feminism with “man-hating”, “masculinity” and other negative labels.

In fact, toxic masculinity harms both men and women, and men have an important role to play and stand to benefit by helping to dismantle it. This a critical point in contemporary and future feminism, and is highlighted by this year’s IWD theme.

Feminists assemble, unite and educate. 2020 will be a big year to ensure that feminist progress not only continues, but that regressions and right-wing politics do not succeed in further reducing women’s rights.

Lea Merone is a public health doctor, economist and PhD scholar. You can follow her on Twitter at @LeaMerone

PrevPreviousEating Green: Good for health, hospitals, communities and the planet
NextPast time to tell the public: “It will probably go pandemic, and we should all prepare now”Next