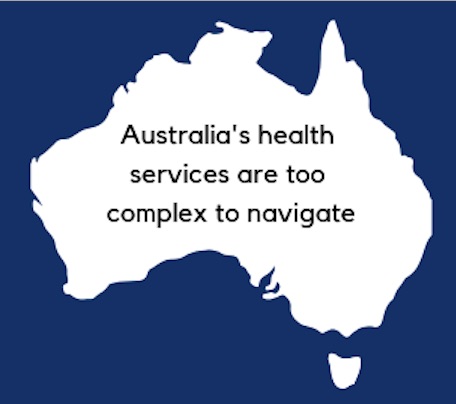 A key message from a new report

“Get on with building a health system that is simpler, fairer and more affordable for all”

Introduction by Croakey: The history of health reform in Australia is not exactly inspiring. Although we’ve had stacks of reviews and inquiries, most have been constrained by narrow terms of reference, and most have had limited, incremental impact, according to a new report.

The result? A non-system that is complex, unable to deal effectively with chronic diseases and “difficult to navigate for both reformer and patient”, says the report, Australian health services: too complex to navigate, which reviews 16 major national reviews of Australia’s health system over the last 35 years.

Released by the Mitchell Institute at Victoria University as a new Australian Health Policy Collaboration paper, the report calls for structural reforms to address the continued fragmentation of government responsibilities, especially in primary and community health care, and the dated fee-for-service payment method.

It also highlights the ongoing failure to invest in preventing disease and poor health, noting that the proportion of Australia’s total health expenditure dedicated to prevention is less than 2%, much less than in New Zealand (6.4%), Canada (6.2%), the UK (5.4%) and even the USA (2.8%).

Labor’s proposed Health Reform Commission could make a welcome difference, suggests the report’s lead author, Rosemary Calder, Professor of Health Policy at Victoria University, writing below that “it’s time to get on” with real reform.

Medicare was introduced in February 1984, when Australia’s population was 15 million, a new machine called the “Apple Macintosh” was launched, the $1 note was about to be replaced by a coin, and the average house in Melbourne cost $68,200.

The world has changed a lot since 1984. However, the basics of health financing in Australia – universal access to public hospital care and rebates for medical services in the community — remain the same.

Since 1984, there have been so many fixes, Band-Aids, workarounds, side deals, additional funding injections, restructures and more Band-Aids. Australia’s health system is now so complicated that it’s too complex to navigate.

We’ve got Medicare managed by the Commonwealth, hospital systems run by state governments, not for profit and private providers, and private health insurance arrangements. We’ve got more health professional groups and ever-narrowing medical specialties. Our health system is a complex web of services, with multiple payers, multiple providers, and significant gaps in services.

The health needs of the population in Australia in 2019 are very different from those in 1984.  The Australian population is ageing, with chronic disease now the dominant health issue. Expenditure on health care is rising faster than both national income and personal incomes.

The pace of change has been too slow, with community concerns about gaps in service, complex arrangements between GPs and specialists, long waiting times, lack of access to the latest drugs or technologies, and rising health insurance premiums and co-payments.

For people living with chronic health conditions, the current system means they can be shuffled from pillar to post, need to see several health care providers, and often miss out on the coordinated care they need to manage their lives.

The calls for action have grown louder, budget pressures at both state and federal levels of government have increased; and there is competing (and related) pressure from the aged care and disability sectors.

But what to do?

We actually know what needs to be done.

There have been 16 major reviews and reports into the health system over the past 35 years. These reviews all highlighted the current complexity of arrangements as a major impediment to improving both the patient experience and health outcomes, and the efficiency of the system.

This was best illustrated by a quote from the Productivity Commission’s 2017 review:

Australia’s messy suite of payments are largely accomplices of illness rather than wellness, only countered by the ingenuity and ethical beliefs of providers to swim against the current”.

Focus on areas of agreement

All of these reviews have been consistent about what needs to change. A first step towards meaningful reform is to re-cast the current policy debates to focus on areas of agreement, rather than disagreement.

Many reviews have recommended national stewardship arrangements to cut through the structural problems.

Australia’s health care system continues to be too complex to navigate for governments and funders, and for consumers and providers alike. We have decades of consistent advice on what needs to be done and there are strong international models and examples of how to do it.

If it is able to operate as an honest broker, take risks and provide stewardship; it could make a real difference. A long-term approach is sorely needed. The focus on equity – as opposed to universality – is welcomed. The promise of accountability is vital.

This plan requires governments and health leaders to swallow their egos, focus on what people need, and get on with building a health system that is simpler, fairer and more affordable for all Australians.

The roadmap for reform is already there, it’s time to get on with it.