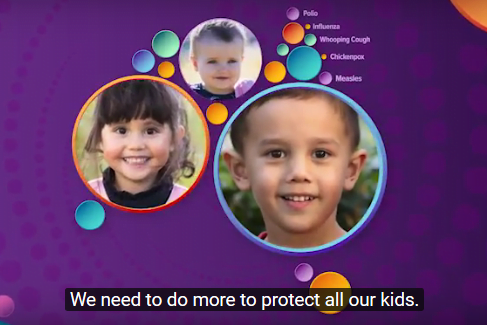 “Get The Facts on Immunisation”: or go beyond facts to get to the heart of concerns?

Earlier this month the Turnbull Government launched its new ‘Get the Facts about Immunisation’ campaign to encourage Australian parents and carers to get their kids vaccinated.

In the post below, Dr Sue Rodgers-Withers and Professor Robert Booy, members of the Immunisation Coalition, welcome the move. But they suggest that efforts to address ‘vaccine hesitancy’, particularly at this time of alternative facts and anti-science sentiment, may want to learn from innovative social marketing campaigns like Melbourne’s Metro Trains’ “Dumb Ways to Die”.

Meanwhile, this (paywalled) article in the latest issue of Vaccine from leading Australian researchers calls for more precision in public commentary in the term ‘vaccine hesitancy’. They say that using the term to explain all partial or non-vaccination is inaccurate and risks generating solutions that are a poor match for the problem in a particular community or population. They write:

“Only with clear terminology can we begin to understand where the problem lies, measure it accurately and develop appropriate interventions.”

The average national immunisation rate in children 5 years and under is about 93 per cent and already providing substantial community immunity. But it could be better.

Some infection outbreaks still occur, because under-vaccinated people are not distributed evenly throughout the population – they cluster in certain regions.

Australian Institute of Health and Welfare data on young children shows that Australia’s under-vaccinated areas don’t occur in remote and isolated locations where access to vaccine services and information may be hindered, but in urban and semi-rural locations.

Under-vaccinated regions like Northern NSW and  metropolitan areas of Perth contribute disproportionately to reducing protection against infectious diseases and thereby amplify epidemics as demonstrated recently by yet another outbreak of whooping cough in the Northern Rivers of New South Wales.

Characteristically, many parents in under-vaccinated areas choose to either delay or refuse immunisation. This is called ‘vaccine hesitancy’. It is complex in nature and may be positively influenced by availability and access to vaccines and confidence in their safety and effectiveness but negatively by complacency about the risk of wild diseases. Vaccine hesitancy is one of the greatest challenges facing national governments and the World Health Organisation internationally.

To address under-vaccination, the Turnbull Government announced a plan to spend $5.5 million over three years on an immunisation education and awareness program targeting areas where immunisation rates are low. This initiative was launched on Sunday 13 August as “Get the Facts on Immunisation”.

The detailed program includes several positive elements: for example, a website and a series of TV commercials featuring compelling stories from bereaved parents who have lost children to vaccine-preventable diseases. The parents had not been made aware that these diseases were present in the community or that preventive measures were available.

However, there is real scope for the “Get the Facts” program to do even more to fulfil its brief of specifically targeting areas where immunisation rates are low.

Need to go beyond facts?

Social research has demonstrated that targeting under-vaccinated populations is a desirable strategy and that success is best achieved when immunisation messages are specifically tailored to such populations. “One size fits all” generic and un-tailored educational and awareness messages perform poorly. In fact, general educational information can actually decrease the intent to vaccinate and, worse, even increase misperceptions about vaccines, particularly among parents who are already strongly resistant.

It is therefore imperative for “Get the Facts on Immunisation” to address their audience and employ strategies that specifically engage their target – the vaccine hesitant.

Changing behaviour through education is best achieved when minds are open and receptive to information. This means the campaign must accommodate the diversity of lifestyles within under-vaccinated regions and lessen conflict stemming from parental perceptions of suspicion or coercion by medical and public health authorities. Such parental perceptions can be minimised by balancing Aristotle’s three ancient modes of persuasion – pathos, ethos and logos. By using language, vocabulary and suitable examples, facts and figures (logos), can be presented via credible voices (ethos) to the intended audience in a manner that appeals to people’s emotions (pathos). 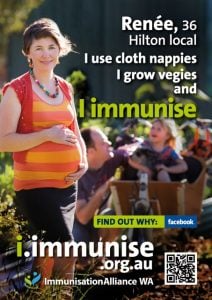 “I Immunise” (see image) is an excellent example of a grassroots, narrative-driven immunisation awareness campaign where pathos, ethos and logos are balanced.  Conducted in Fremantle Australia, with an alternative lifestyle community where the vaccination rate is lower than the national average, the stories of six residents who chose to vaccinate were told through messages such as “I use cloth nappies, I eat wholefoods and I immunise”. This campaign ticks many important boxes. Rather than taking an authoritative tone, it embraces the community in a collaborative nature.

Importantly, its messages are tailored, they affirm existing community values and are presented in a manner that minimises the perception of any hidden agenda. It also has strong peer appeal – letting people know what others are doing is one of the most effective ways of achieving  behavioural change. A similar approach has recently been adopted by Immunise Melbourne.

Importantly, no two under-vaccinated regions share the same socio-demographic or belief profiles. By postcode, wealthy, educated and highly skilled areas like Sydney’s CBD, Haymarket and The Rocks have a vaccination rates around 70 per cent while the  Northern Rivers region of NSW, where alternative lifestyles predominate, has Byron Bay at 73.2 per cent and nearby Mullumbimby at 52 per cent.

Even neighbouring alternative lifestyle communities have fundamental differences. Separated by less than 70km, the socio-demographic profile and worldviews held by Nimbin residents differ significantly from nearby Byron Bay. Ideally, “Get The Facts on Immunisation” could be tweaked to accommodate such variations.
In the current era where alternative facts and  anti-science sentiment often prevail, and prominent world politicians deny the safety and effectiveness of vaccines, perhaps the Turnbull government planners could draw more inspiration from these innovative social awareness programs that target specific audiences.

In an initiative to reduce deaths and discourage reckless behaviour around trains, Melbourne’s Metro Trains “Dumb Ways to Die” became a highly successful and awarded social marketing campaign. In addressing a serious and otherwise sombre topic, this campaign reaches its target audience – millennials –  replacing preachiness by embedding its message in catchy songs and interactive media. We have long known that facts alone (logos) are necessary but insufficient. Rather than repeating the past, the future health of our children may be enhanced much more by credible innovations (ethos) that go to the heart (pathos).

The Immunisation Coalition (IC) is a not for profit organisation, with its purpose to improve the protection of all Australians against infectious diseases by advocacy for immunisation.

Prof Robert Booy is a Director of the IC and  Dr Sue Rodgers-Withers is an IC member.