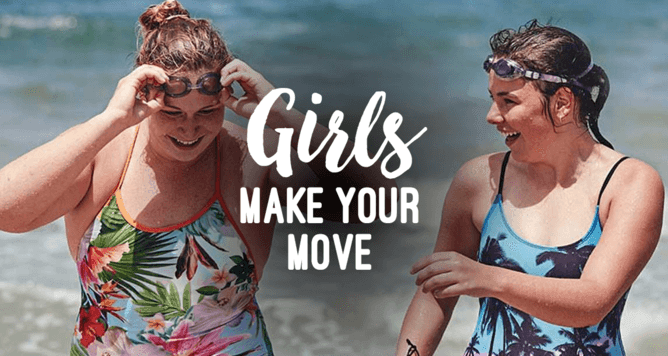 We all know that being active has physical, social and emotional benefits. In primary school, the average kid does more than 100 minutes of moderate-to-vigorous physical activity each day. But it’s all downhill from there, especially for girls. By the time they are 15-17-years-old, girls are active for less than 30 minutes each day.

Teenagers should be doing at least 60 minutes of moderate- to vigorous-intensity physical activity every day. In 2010, only 5.9% of girls (compared to 18.7% of boys) in year 11 were meeting the physical activity guidelines.

Last week the Australian government launched the Girls Make Your Move campaign. The campaign aims to encourage young women aged 12 to 19 to be more active.

The TV ads show young women engaged in a range of sports and activities, with motivating music and catchy hashtags. There are also a series of print ads and billboard ads, each featuring a different sport or activity.

The reaction to these ads has been largely positive, with praise for its positive tone and the inclusion of girls of different cultures, body shapes and abilities. It is great to see the government has taken on board the finding from the campaign research that girls want to see positive messages about having fun rather than hearing about the health risks of being inactive.

This is also consistent with evidence that traditional approaches of scaring people into changing their health behaviours generally don’t work with young people. Another tick is that it’s not just an ad campaign; there are plenty of local events for girls to engage with on the ground.

Negative reactions have generally focused on the (acknowledged) copying of a UK campaign and the use of an American soundtrack.

There have also been some “what the…” responses to the use of “Sweat Now. Be Sweet Later” as a catch-cry. I suspect this was meant to address inactive girls’ concerns about being sweaty and uncomfortable, but its reception on Twitter suggests it may have fallen short:

You’re mobilised to move, then what?

The Insights Report emphasised the need for the use of multiple media channels, and particularly social media. So, what did we get?

The campaign research identified a range of barriers to girls engaging in physical activity. Girls said they felt self-conscious. They find getting hot and sweaty uncomfortable. They feel embarrassed if they are not as capable as other girls.

The “activities” page invites girls to “Check out the activities and apps that can help get you moving.” This is where a girl might look for the practical information she needs if she is thinking about participating in a new activity.

What does she get if she looks for “tips”?

What does she get if she clicks on “apps”?

The section on “tips for girls” and “tips for parents” is similarly bland.

All of the media ads direct girls to the website to “get started”.
So, the website should inspire and empower. I would expect to find:

(Who) is it likely to motivate?

Reviews of physical activity media campaigns have generally found we all see them and remember them, but they don’t change our behaviour.

Most Australians remember Norm but increasing numbers of us share his iconic body shape.

Media campaigns are an important step in raising awareness of an issue, like the fact that girls need to be more active.

For a campaign to lead to behaviour change it needs to do a lot more than tell us what to do. It needs to show us how to do it, and provide us with tools and resources. The Australian national Get Moving campaign had spectacular awareness – 99% of children and 96% of teenagers saw the campaign – but it didn’t make them more active.

These ads are likely to engage the girls who enjoy being active but have fallen out of the habit, by reminding them how much fun they have. The public events, especially those that feature high-profile athletes, will also reach and engage this target group.

On their own, they may not have much of an impact on those who are disinterested in physical activity. They need to be supported by materials that increase girls’ beliefs in their ability and give them tools for planning to be more active.

Todays’ teenage girls have more friends on Facebook than in the real world and spend more time in cyberspace than in the fresh air. A social media presence should enable girls to connect, share and inspire each other. It should also provide a place for the two-way communication that today’s young people expect if they are going to engage with a campaign.

On Instagram, where it does have a unique presence, Girls Make Your Move has already amassed over 2,000 followers. Hopefully, this will inspire the cautious government to stick a few more toes in the water and build a Facebook page and Twitter profile that engages with young women.