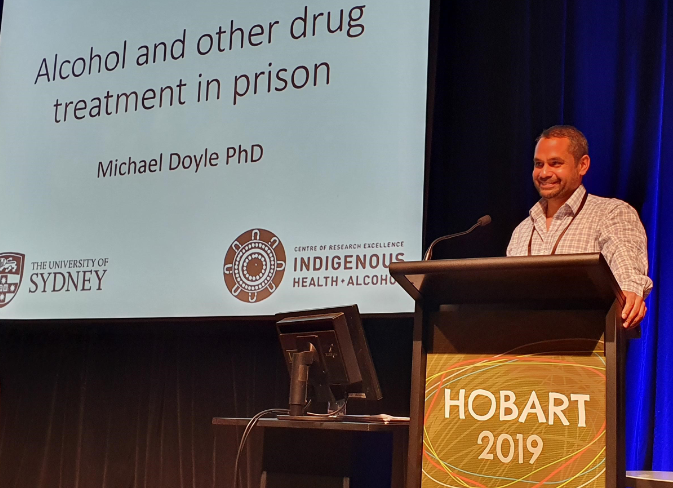 Bardi researcher Michael Doyle presenting on the findings of his PhD: Pic supplied

Bardi researcher Dr Michael Doyle and PhD candidate Teagan Weatherall, a Kamilaroi and Anaiwan woman, will present on Thursday (3 September) in the latest webinar of the 2020 Symposium Series for the Centre of Research Excellence: Indigenous Health + Alcohol.

See our coverage of the first webinar, or you can watch a recording here.

Indigenous researcher Dr Michael Doyle doesn’t have to look too far afield to find his early inspiration for working in Aboriginal and Torres Strait Islander health.

A Bardi man who grew up between the town of Geraldton and his remote community of Djarindjin in Western Australia’s Kimberley region, he contracted rheumatic heart disease as a child. Seriously ill for a number of years, he was expected only to live into his early 20s.

Now in his 40s, he has recovered remarkably. But as well as that being a pivotal personal experience of ill health, his mother made it clear to him that the Geraldton Regional Aboriginal Medical Service (GRAMS) “really saved my life” through its strong cultural and clinical care.

Having rheumatic heart disease – “a disease of poverty” – was also emblematic for him in the context of health equity, its burden in Australia borne almost exclusively by Aboriginal people, with rates that are still among the highest in the world, four decades after he contracted it.

Two other experiences also steered Doyle to his 2018 PhD and ongoing post-doctoral work on alcohol and other drug treatment for Aboriginal men in the criminal justice system.

In his early teens, he shared the profound distress suffered by the community in Geraldton at the 1988 death in custody of the 21-year-old Edward Cameron. His death was one of many that led to the Royal Commission into Aboriginal Deaths in Custody.

“These dots all just started connecting,” he said.

Another event that influenced his choice for further study came some years after he had joined the Aboriginal health workforce. It was there he saw new awareness and resourcing of the health of Aboriginal children because of issues highlighted in the landmark Telethon Institute WA Aboriginal Child Health Survey.

Doyle moved from health service delivery into health research, because he felt the survey showed the power of research, that it “could bring about change more on a system-wide scale”.

His early research work at Curtin University’s National Drug Research Institute (NDRI) was in Aboriginal alcohol and other drug use and treatment. Moving to the Kirby institute in Sydney ten years ago put his focus more on alcohol and drug treatment in prisons – an area few Aboriginal and Torres Strait Islander researchers are working in. 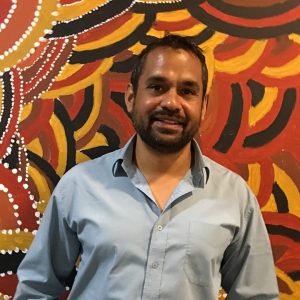 He is now a Senior Research Fellow at Sydney’s Centre of Research Excellence: Indigenous Health + Alcohol, and one of just four Aboriginal and Torres Strait Islander recipients of an NHMRC Investigator Grant this year to further his post-doctoral work.

He will present on that work on Thursday as part of the Centre of Research Excellence: Indigenous Health and Alcohol’s 2020 Symposium Series.

Doyle will be joined at the webinar by fellow CRE researcher Teagan Weatherall, a Kamilaroi and Anaiwan woman who is enrolled in a PhD at the University of Sydney. She has worked in Indigenous health for a number of years in Sydney and in remote Northern Territory.

The CRE says it has set up the series to “allow the voices of Aboriginal researchers to shape our understanding about alcohol and Aboriginal and Torres Strait Islander communities”, reflecting on how Australia can have more appropriate clinical services and policy and ensure that community values and community voices are core to decision making.

Doyle says the urgency of his work in prisons is in the statistics that show Aboriginal and Torres Strait Islander people make up nearly 28 percent of Australia’s prison population, versus around three percent of the total Australian population – a disproportionately high rate that continues to rise.

Recidivism is high: 75 percent of Aboriginal and Torres Strait Islander prisoners have been in prison before.

There are many complex factors are behind those figures, including the impact of colonisation, he says. But drug and alcohol use plays a powerful role, with three-quarters of Australian prisoners having a history of “hazardous use” that has contributed to both their offending and recidivism.

Yet, despite the clear benefits to be gained from addressing substance abuse for individuals and their families and communities, there has been a “a paucity of research” in prisons into alcohol and other drugs use and prison-based treatment.

The first qualitative research of its kind in Australia, the work has “helped give these men a voice”, says Associate Professor Scott Wilson, a Chief Investigator at the CRE.

Doyle agrees that being an Aboriginal man interviewing Aboriginal men in prison made a real difference, prompting a greater level of frankness because the participants knew he brought cultural understanding to their experiences and the solutions on offer.

“There’s a different sort of conversation that happens, that you see in the interviews where they call me ‘bro’ and say ‘you know how it is’. It can make it a bit awkward from a personal perspective, but I think you get a level of honesty in those conversations that others might not,” he says.

It also underscores the findings of his PhD that having the right group dynamic is critical for prisoners engaged in group treatment for alcohol and other drug dependency, where “if you’ve got a group with people who are not sharing their own personal experiences when they’re in group treatment, then it will close down the whole group of people”.

Doyle says some of the lessons for effective alcohol and drug programs in prison were to try to ensure that the participants were at similar stages in recovery, as well as in the program for similar purposes to assist relationship building.

Also “incredibly important” was having a co-facilitator with lived experience of addressing substance abuse versus “having somebody who is younger than you talk to you about how you can overcome drug and alcohol problems when they’ve never experienced any of them”.

“Seeing is believing,” he said.

Role models, mentoring and other support

It’s a message that also resounds for Doyle when he talks about the importance of role models for his own career and for many other Aboriginal and Torres Strait Islander people working in health and health research.

Noongar GP and health researcher Professor Sandra Eades, Australia’s first Aboriginal medical doctor to be awarded a PhD in 2003, was one such role model for him in his early career years.

“Everyone in Aboriginal health in Western Australia knew Sandra Eades,” he recalls. “You see people like her and think, ‘wow, maybe I can do something like that’.”

Doyle regularly sees an over-reliance on sport as the only road to success for many young Aboriginal men, including among the participants in his research.

“If you make it in the big league in sport in Australia, you become this rock star superhero in the Aboriginal community,” he says.

He would also like to see the same star treatment accorded to people like leading Aboriginal health researcher Professor Alex Brown, who is part of a network working to eliminate rheumatic heart disease in Australia over the next decade.

Also important, he says, is academic mentoring and support from individuals and institutions.

Doyle says that’s often vital for Aboriginal and Torres Strait Islander emerging leaders, like him, who are the first from their communities to chart a pathway through some universities or research areas, often encountering culturally unsafe curricula or environments or enduring personal hardship.

The death of his mother was one hardship he endured while working to become the first Aboriginal person to graduate with a Master of Public Health from the University of Western Australia. His work helped him deal with her loss, he says, but he thinks it’s important for Indigenous students to factor grief into the strategies they may need.

Having presented widely to date on his PhD (you can read it here, watch this presentation or see this slideshow), Doyle’s focus for Thursday’s event will be on his latest paper. Co-written with Dr Jill Guthrie, Professors Tony Butler, Anthony Shakeshaft, and Kate Conigrave and Dr Megan Williams, the paper looks at the onset and trajectory of alcohol and other drug use among Aboriginal men entering a prison treatment program.

The paper urges an integrated effort — to address social determinants of health, to build resilience, and to prevent and treat substance use disorders, calling for help for parents and other adult family members to address their own substance use and so reduce the impact on their children.

It calls for greater efforts to retain young Aboriginal people in school, exposure to a greater diversity of Aboriginal men as role models, and alternatives to prison because of what a record can mean for employment prospects. Quality treatment within and after prison is critical.

On Thursday, Doyle will outline next steps in his research, looking at prison discharge planning and the strengths of Aboriginal men in Australia and Canada with drug and alcohol issues who managed them and did not return to prison, asking “what was it helped them make changes in their life so that they are now living the way they want to”.

The Croakey Conference News Service is producing a series profiling some of the speakers at the 2020 Symposium Series, and Dr Tess Ryan will also live-tweet each webinar. Follow @TessRyan1.

The webinars are from 11am-12pm AEST.

Sep 3: Unhealthy alcohol use and dependence: in community and prison samples