Ahead of the federal election, one of the world’s leaders in tackling health inequalities has warned against top-down approaches to addressing poverty and related health problems, and urged politicians and policy makers to instead cede power to frontline service providers and communities.

Sir Harry Burns, a former surgeon and chief medical officer of Scotland who is now a Professor of Global Health at Strathclyde University and who has been working to reduce childhood health inequalities for about 30 years, called for an end to centralised policy making focused on performance targets and holding power centrally.

In a keynote presentation to the recent National Rural Health Conference in nipaluna/Hobart, Burns instead urged governments to shift to another paradigm, of sharing power with frontline staff, and working with citizens to enhance their sense of control over their lives.

His vision for addressing the determinants of health inequities stands in stark contrast to Australia’s history of punitive, controlling policies – from the Northern Territory Intervention to Centrelink’s automated debt recovery system, the ParentsNext program and soaring rates of removal of Aboriginal and Torres Strait Islander children.

In an interview with Croakey, Burns, described the Basics Card, whose extension has been supported by both major parties despite widespread concern amongst the social and Aboriginal and Torres Strait Islander health sectors, as “absolutely stupid”.

Burns, who had not been aware of the policy until asked about it, said:

It sounds to me as if quarantining benefits is Government telling people what they can and cannot spend their money on, and that is undermining their sense of control even further and that will make the problem worse.

…when you’re telling people they can’t spend the money that the state says is theirs, that is Victorian in my view, absolutely stupid.”

Meanwhile, members of the National Rural Health Alliance have voted to support the #raisetherate campaign  advocating for an increase in the Newstart payment to unemployed people.

This measure was the single most important step that could be taken to address poverty and health inequalities in Australia, the Alliance’s conference was told by Australian Council of Social Service CEO Cassandra Goldie.

NRHA chair Tanya Lehman told Croakey on Monday that the Alliance would advocate for an increase to Newstart as an example of something tangible that government can do to address the social determinants of health. 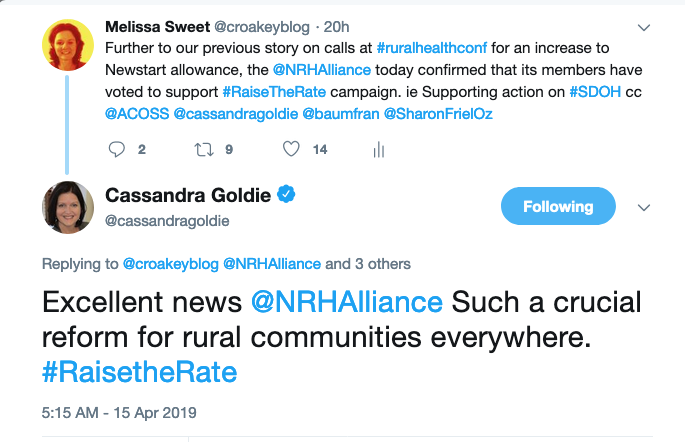 At the conference, Sir Harry Burns described the work in Scotland of the Early Years Collaborative – a coalition including social services, health, education, police and non-profit providers – which had made significant gains in addressing childhood health inequalities.

It had done this by moving away from centralised policy making and empowering frontline staff to implement a quality improvement process in partnership with communities, he said. The collaborative regularly brought together about 800 people from frontline service providers to share experiences and support the testing of ideas, which had included various initiatives to support more bedtime reading to children.

Instead of having top-down, controlling type policies where the public sector does things to people and even undermines their sense of self-esteem even more, we decided to design change from the bottom up.

We would have front line staff and citizens working together to achieve what mattered for them. It’s the complete antithesis of a top down policy coming from a government minister.”

The collaborative members agreed what they wanted to change, by how much, and by when, using the marginal gains approach often used in sport – described by Burns as, “do lots of things, see what works, and if you do what works consistently, you get a significant change in outcome”. 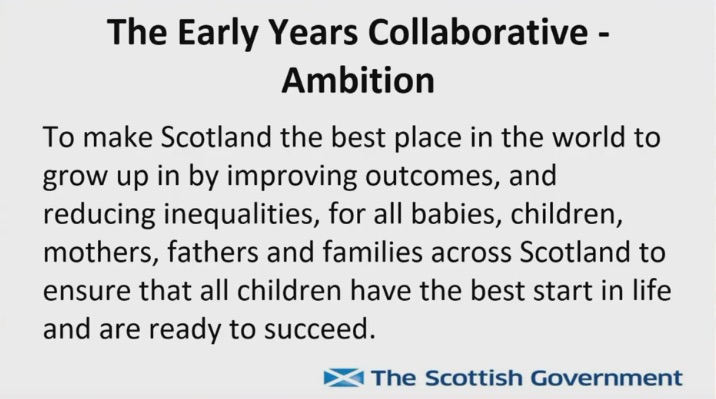 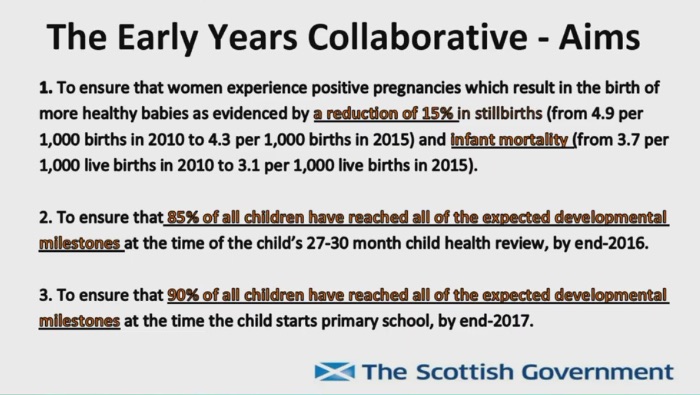 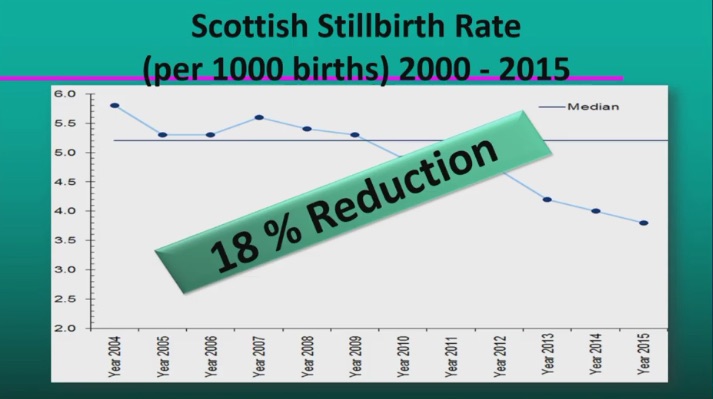 Burns gave an overview of scientific, clinical and public health evidence supporting the approach taken by the Collaborative in aiming to increase, rather than undermine, people’s sense of control, from the earliest years.

He said policy makers tended to undermine people’s sense of control over their lives through a focus on “problems, needs, deficiencies”.

These are people who already do not feel they have a sense of control over their lives, and we make that worse.

Services tend to focus on one particular issue and they don’t understand the complexity of the lives of these individuals.

Citizens are made even more passive recipients of services rather than being active agents in their own lives. We do things to people as a public sector, rather than working with them to enhance their capacity to do things better.”

Burns also urged delegates to shift the system’s focus from illness and pathology to wellness and to look for ways to better support wellness in communities and individuals.

The science of Salutogenesis included dozens of theories about what contributes to physical, mental and social wellbeing, with a key learning being the importance of people experiencing some purpose, coherence and control in their lives, rather than feeling under the thumb of “some faceless government department”.

Other characteristics of wellness included a sense of confidence that people can deal with problems, and a level of resilience in the face of the problems. “Almost always in the background is a supportive network of friends, often family but sometimes friends,” Burns said.

At this link, see his full presentation (watch from 25 minutes in).

Also, listen to this podcast where Burns describes why he left surgery for a career in public health and talks about the need to invest in supporting families:

I have never met a parent who wanted to be a bad parent, but I have met hundreds of people who didn’t know how to be good parents… they are not good parents because they are overwhelmed by the difficulties of day to day life. They become violent, they become depressed.

Find ways to support them to be better parents, you will see [changes], and eventually significant savings to the public purse because those kids aren’t growing up to go to jail.

Family support, supporting children, understanding how chaos can damage children ­– put all the effort into that and society will change immeasurably.” 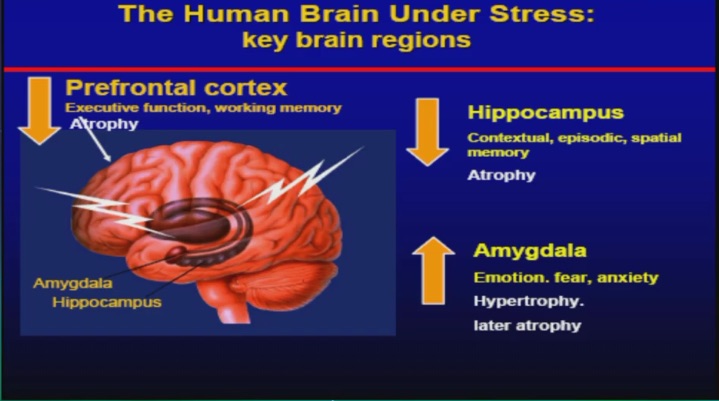 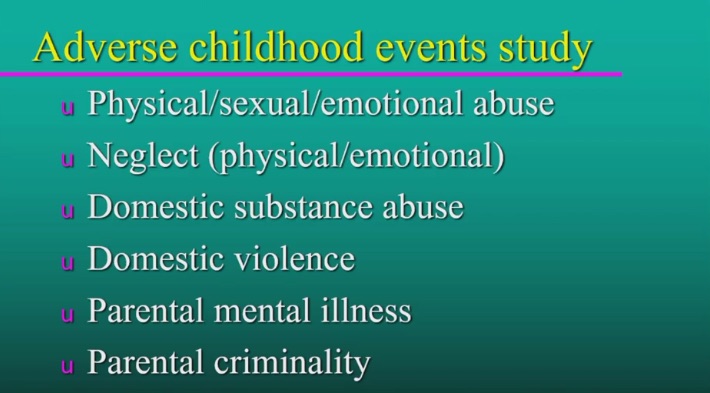 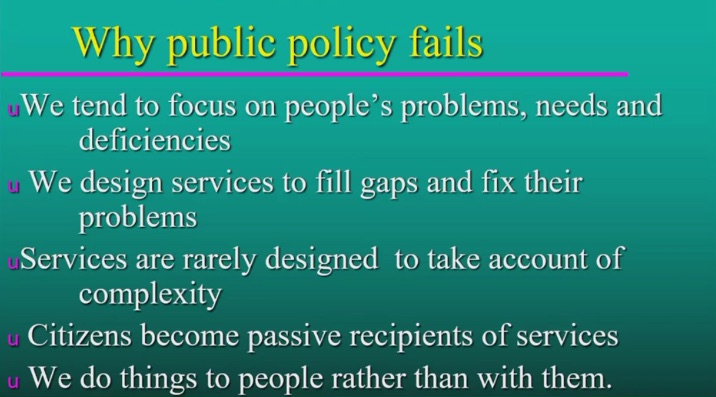 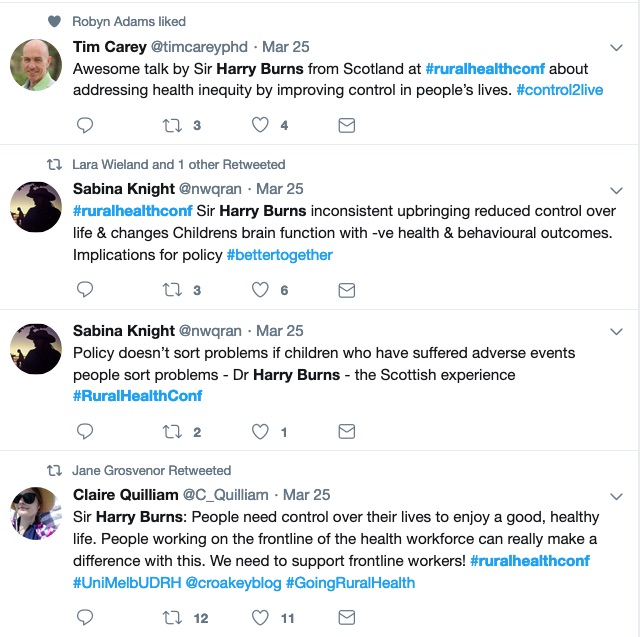 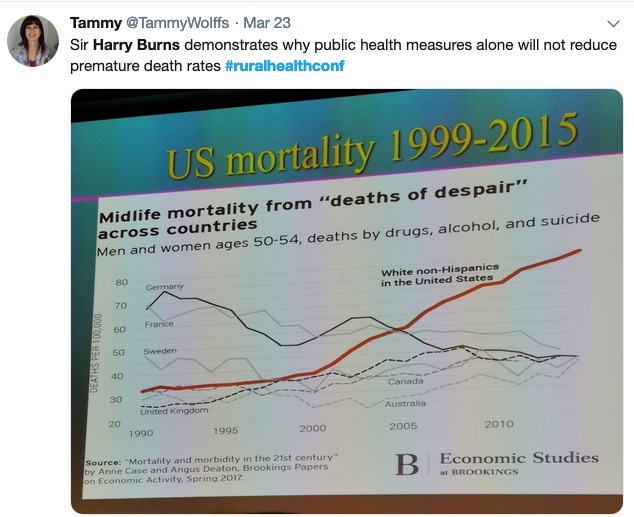 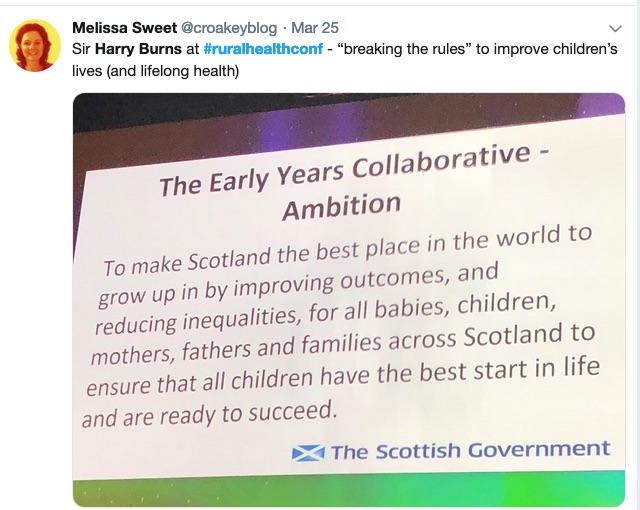 Watch a playlist of 11 videos from the conference (seven of these interviews were broadcast live, and had 1,249 views in total via the Periscope app as of 3 April 2019).

• Dr Jenny May, chair of the 2019 conference recommendations committee, speaks about the need to address climate change, health inequalities and social determinants of health.

• Renee Blackman describes the strengths of comprehensive primary healthcare as delivered by ACCHOs.

• Sir Harry Burns, a former surgeon and chief medical officer of Scotland who is now a Professor of Global Health at Strathclyde University, speaks about the importance of governments working with citizens to enhance their sense of control over their lives.

• Dr Bo Remenyi calls for action on housing and community-based solutions to tackle rheumatic heart disease in remote communities, which she describes as a disease of poverty.

• Some delegates at the 15th National Rural Health Conference were moved to tears by this performance of a song written for the event.

PrevPreviousCall for #AusVotesHealth parties, candidates to recognise climate change as “core public health threat”
NextUnder the influence – glamour and spin used to manipulate us to drinkNext