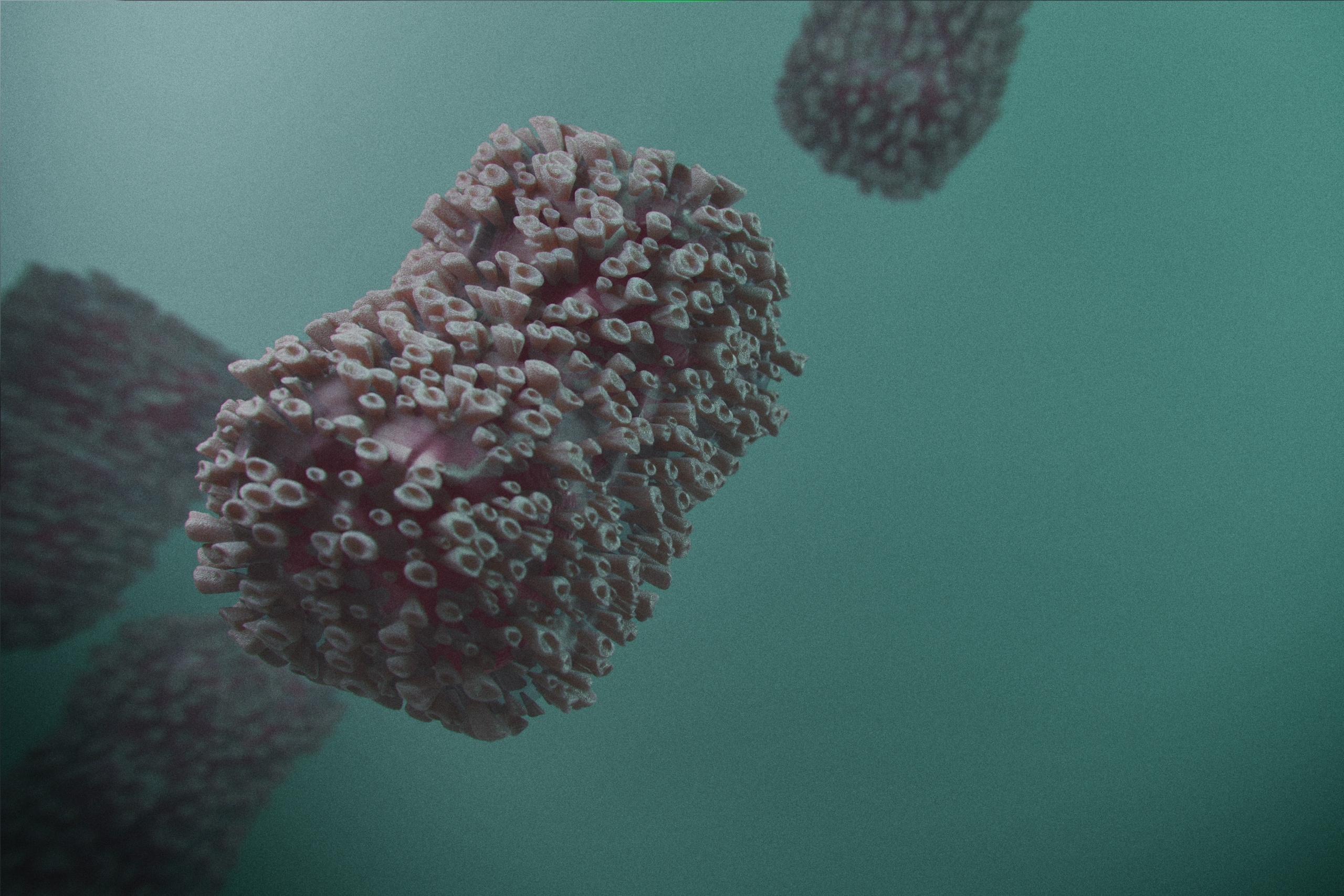 Global health experts are due to meet on 21 July to consider whether the monkeypox outbreak now affecting more than 70 countries should be declared a Public Health Emergency of International Concern (PHEIC), the highest level of global alert.

Almost 14,000 confirmed cases have now been reported to the World Health Organization this year, with five deaths reported, all in Africa. Most cases continue to be reported from Europe, primarily among men who have sex with men.

A prior WHO meeting on 23 June opted against this declaration but the World Health Organization announced last week that it would reconvene the International Health Regulations (2005) Emergency Committee, as case numbers continue to rise.

Many experts believe it is no longer possible to contain the spread of the infection, according to a 19 July report at STAT that describes the growth in cases and the geographic spread as “rapid and relentless”.

The report also notes that monkeypox vaccine is in short supply globally and will be for months to come. Media outlets are reporting long queues for vaccination in some countries.

Croakey editor Alison Barrett recently guest tweeted for @WePublicHealth on the latest developments with monkeypox, as summarised below.

The latest epidemiology report published by @WHO shows the median age of people who have acquired monkeypox is 37 years.

Many cases “are not presenting with the classically described picture for monkeypox (fever, swollen lymph nodes, followed by rash)”. Of those reporting at least one symptom, 81 percent presented with widespread rash, 50 percent with fever and 41 percent with genital rash. 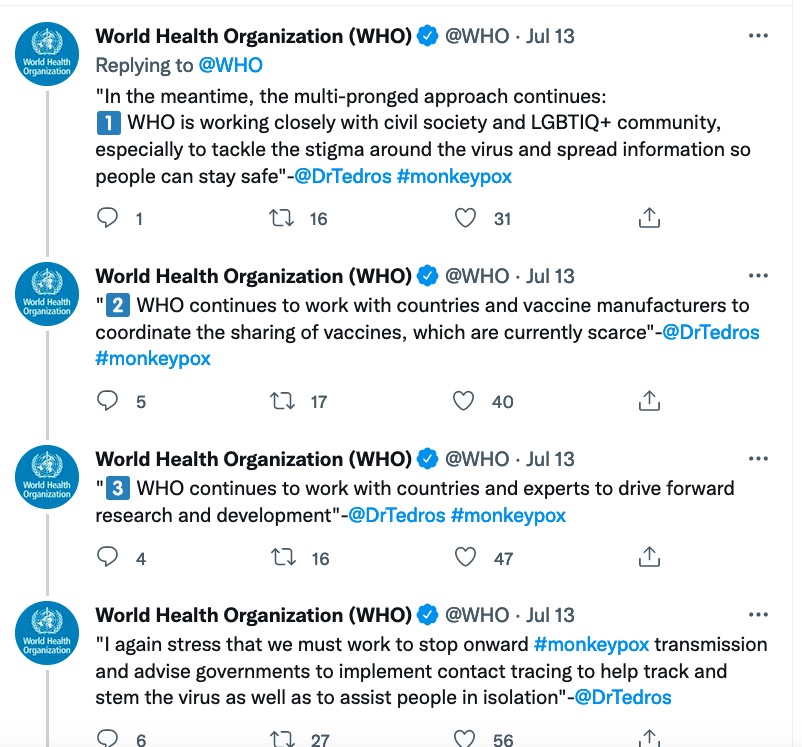 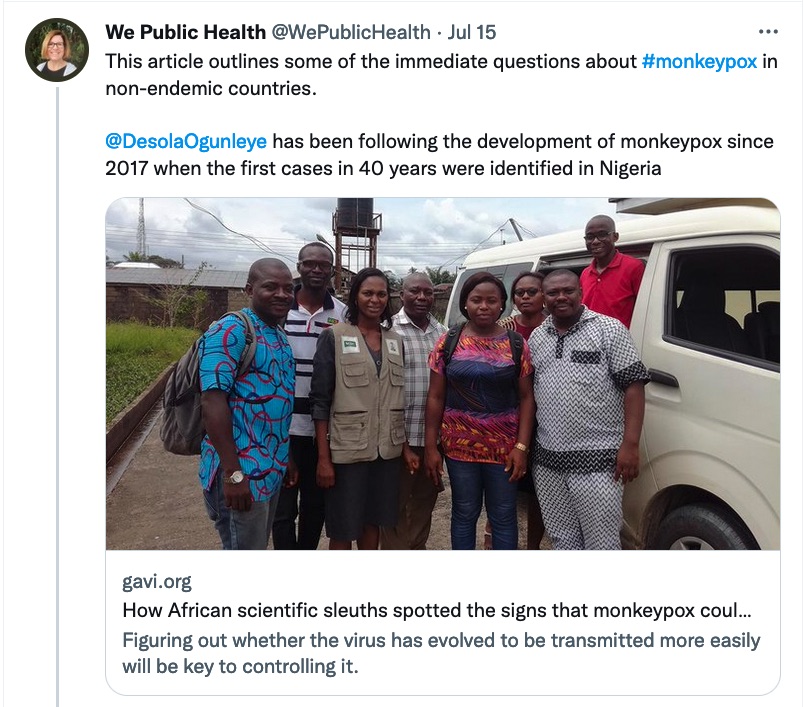 No African countries have large stockpiles of the smallpox vaccine. @DesolaOgunleye says “It is unethical that there are still countries that have no access to vaccines on the basis of affordability and accessibility” and would like to see endemic countries with increased supply.

This thread summarises some of the key points from the latest risk assessment on monkeypox from @ECDC_EU, published 8 July.

Several gaps still exist in knowledge of monkeypox, including more precise estimate of infectious period, documentation of pre- and asymptomatic transmission, behaviour insights in the most at-risk groups.

Former FDA commissioner, @ScottGottliebMD “compared the response to the monkeypox virus with the start of the COVID-19 pandemic, saying the US is making “a lot of the same mistakes,” citing a lack of testing early on and not enough vaccines distributed to the community” – via @CNN. 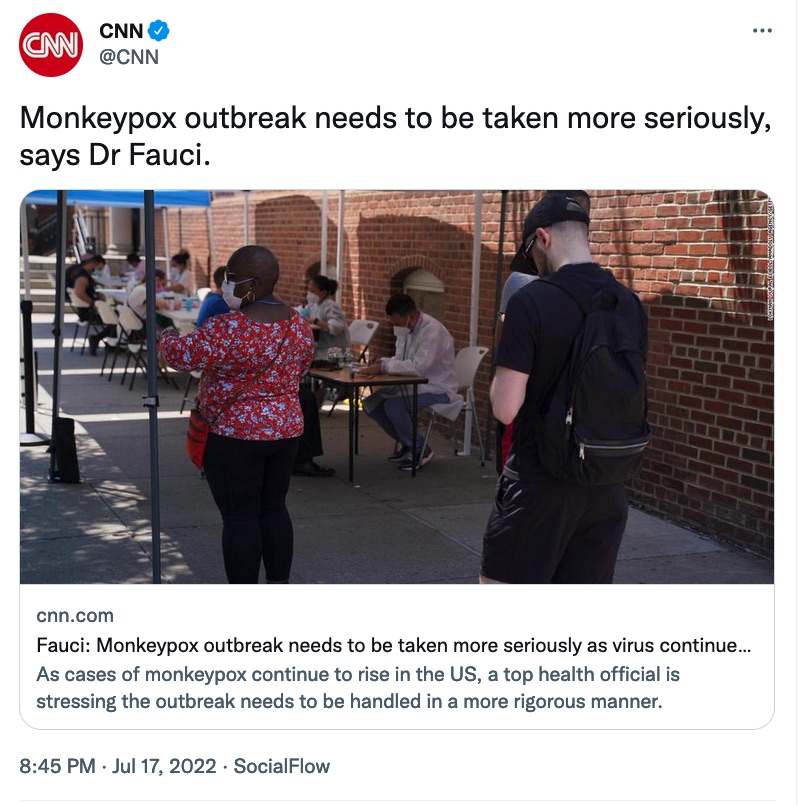 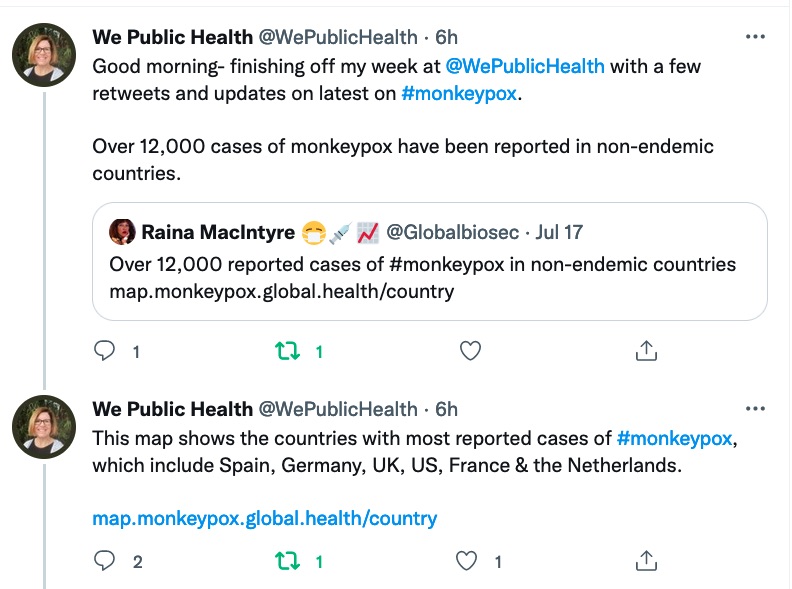 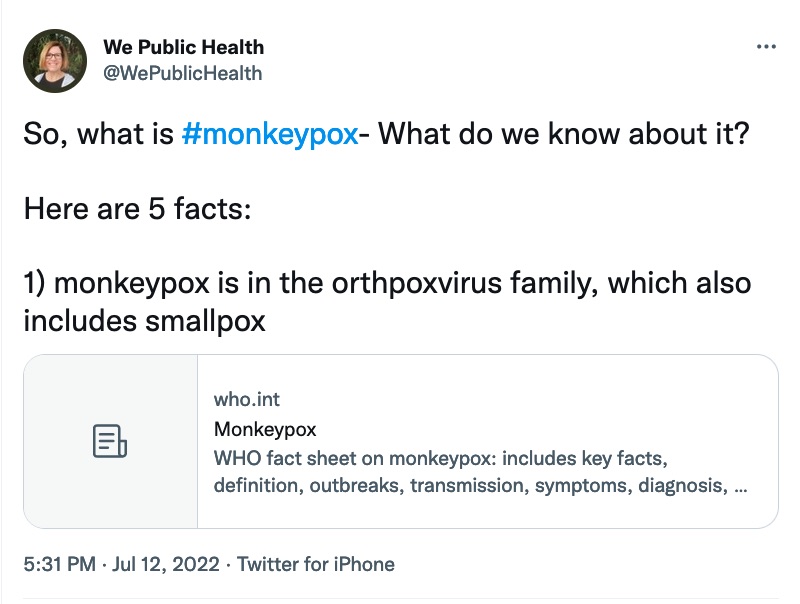 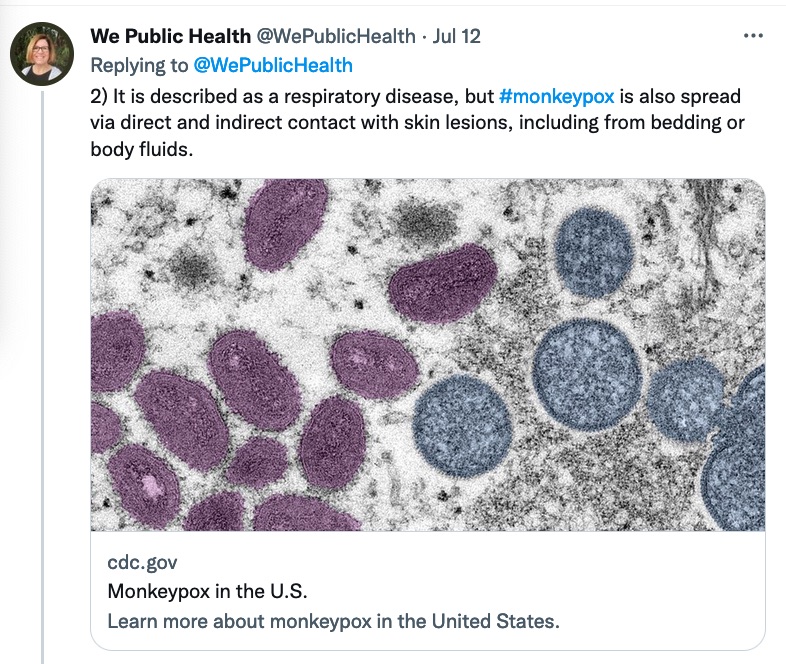 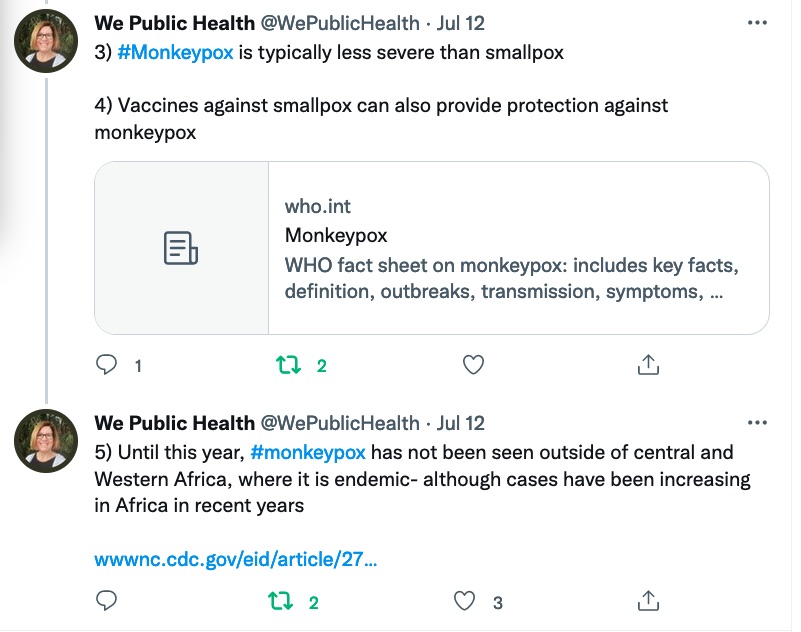 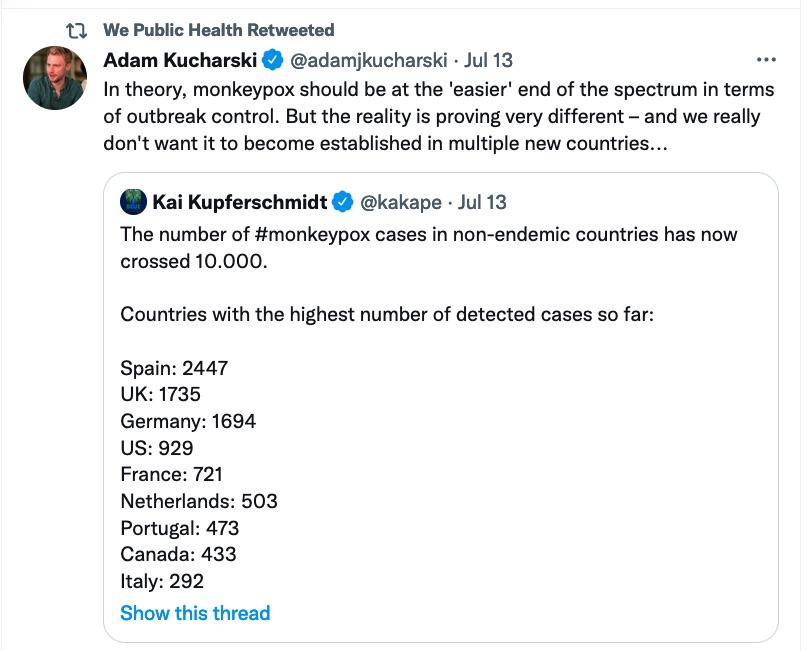 The Federal Government has been urged to vaccinate at risk groups. Brisbane MP Stephen Bates said it was crucial to prevent queer communities being stigmatised by the outbreak, and it should not be incumbent on the community to push the government to act.

“We’ve seen from COVID that early action is important – and every delay in developing an action plan just puts people’s lives at risk,” he said.

Writing in The Medical Journal of Australia on 18 July, Kirby Institute researchers Professor Raina MacIntyre and Professor Andrew Grulich argued containment would be best achieved with available antiviral treatments and third-generation smallpox vaccines. As of 27 June 2022, Australia has had 13 cases.

“The objectives are to ensure the outbreak in humans is stopped and to prevent monkeypox from becoming established in animal hosts in Australia,” they wrote.

“Introduction of dengue and now Japanese encephalitis into Australia are lessons to heed. Active surveillance and containment are essential, ideally with antivirals and third generation smallpox vaccines for close contacts for immediate use.”

They urged gay, bisexual and other men who have sex with men who have recently returned from overseas, particularly from Europe, to watch for symptoms of the disease, and if concerned, visit their general practitioner or local sexual health clinic.

Australia’s LGBTQ health organisations, which have their origins in the HIV response, are central to an effective prevention response. They have already issued alerts, educating community members about the mode of transmission, the symptoms, and the need for symptomatic persons to seek medical assistance and to isolate.

While Australia was well placed to mount an effective response, the ongoing burden of COVID‐19 on the health system may pose a challenge if the monkeypox epidemic becomes large in Australia. 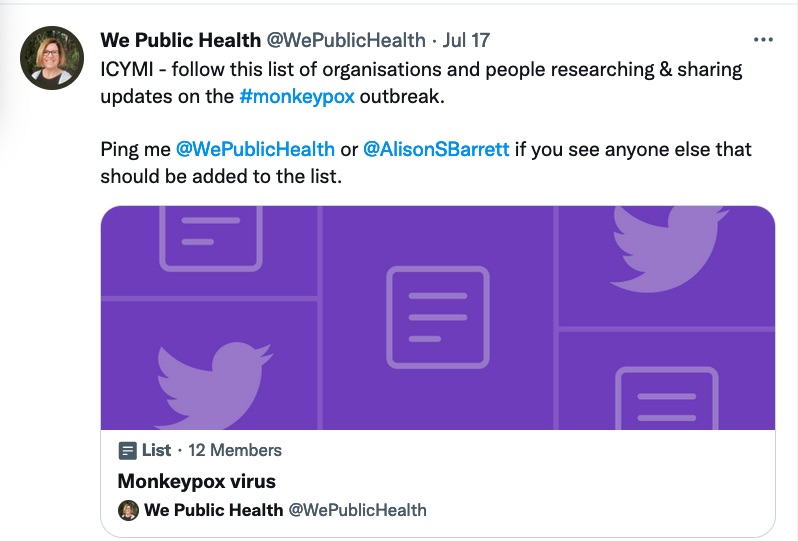 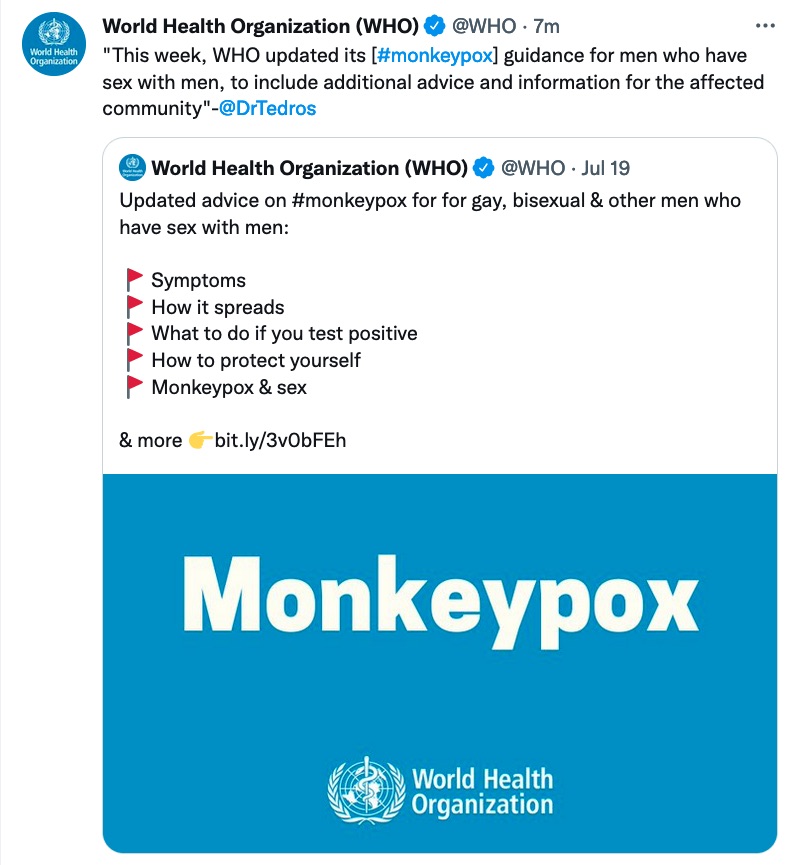 See Croakey’s archive of stories on the monkeypox outbreak.