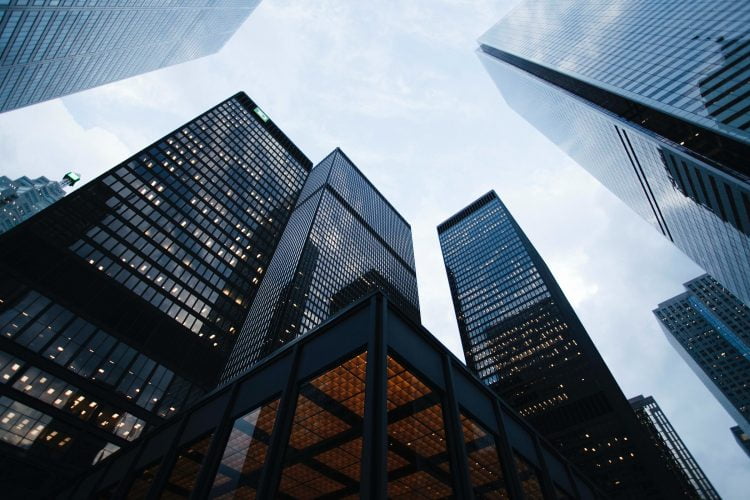 Putting the spotlight on corporate and colonial drivers of unhealthy food systems. Photo by Sean Pollock on Unsplash

Introduction by Croakey: Addressing the political, economic and colonial systems and corporate structures that produce harmful food systems is on the agenda of the 2021 Global Food Governance Conference this month.

The conference is supported by the Food Governance Node at the Charles Perkins Centre, University of Sydney; the Global Center for Legal Innovation on Food Environments housed at the O’Neill Institute for National & Global Health Law at Georgetown University; and The George Institute for Global Health.

It will be held online December 13-15 from 2-7 pm EST (Washington DC) and the AEDT timing is: December 14-16, from 6-11 am. Jennifer Doggett will cover the discussions for the Croakey Conference News Service.

The COVID-19 pandemic has illuminated major defects in our food system, and global experts are meeting later this month for a timely food governance conference exploring multi-layered solutions – from decolonising food systems to more effective use of regulation.

The past two years have seen a rise in food insecurity and hunger experienced by millions worldwide, with up to 811 million people in the world going hungry in 2020, according to United Nations data, following disrupted supply chains and continued food price inflation.

The pandemic also highlighted the unacceptable prevalence of non-communicable diseases (NCDs) – which put millions at greater risk from COVID-19 – fuelled by highly processed foods that dominate the current food market.

This, in large part, comes down to the colonised and corporate food networks that operate globally, says Nick Freudenberg, Distinguished Professor of Public Health at City University of New York School of Public Health and Director of the CUNY Urban Food.

“We have created a global food system that gives a priority to highly processed food, high in fat, sugar, salt and many other ingredients…and that diet has come to dominate because it’s a diet that is profitable for global food industries, even though it also harms the health of people,” he says.

Even before the pandemic, more than 10 million deaths were attributed to unhealthy diets each year, despite ongoing calls for action on obesity and dietary NCDs. COVID-19 then put the more than 650 million people living with obesity at risk of severe disease and death, if infected.

“The failure of governments to earlier address the harmful consequences of highly processed diets made the COVID pandemic much worse,” says Freudenberg. “As we see the cost of that getting higher and higher, I’m hoping people will see the benefits of acting to change our food system.”

But acting is itself multi-faceted, with there being no single solution to overcome a problem of this scale.

Freudenberg’s research focuses on many pathways for change, from researching the role of corporations and businesses (the global food industry) to working on policies at the city-level, to getting healthier and more regional food to urban environments, and ensuring equitable access across cities worldwide.

“I believe cities have an important role to play in constructing alternatives to that highly processed diet that is favoured by the global food industry,” he told Croakey, adding that this can be addressed through food programs and food served in schools, hospitals and childcare settings as well as using opportunities to market locally grown food.

The US-based researcher helps cities, including his home city of New York, to develop packages of policies to reduce the influence of the global food industry and the highly processed diet it pushes, to one that is “better supportive of human health and a healthy planet”.

Freudenberg’s work also explores the role modern capitalism plays in the state of global health and climate and the more recent changes that have made it more destructive. This includes corporate domination of not just the food industry, but also pharmaceuticals and fossil fuels.

“We have to acknowledge that it’s the political and economic system and corporate structure that is contributing to our food problems and many other problems,” says Freudenberg, who authored the book ‘At what cost: modern capitalism and the future of health.’

To really effect change, he believes a social movement is needed, details of which he will highlight during his keynote at the Global Food Governance conference later this month.

Social movements to date have helped public health advance in the last two centuries, he explains, citing the examples of the labour movement which increased protection for workers in the late 19th and 20th centuries, as well as the environmental movements that led to cleaner air and water in cities.

“It’s not something new to say social movements lead to improvements in public health. Now we need to figure out how to do that in the 21st century,” says Freudenberg.

This is just one solution that will be explored during the conference, which will see a wide range of experts come together, from lawyers and policymakers to nutritionists and health scientists. The meeting will explore how law, policy, and regulation can help address food system challenges and enable healthy and sustainable food for all.

Freudenberg’s keynote will be in conversation with Amandine Garde, Professor of Law at the University of Liverpool. Garde has a special interest in human rights law and the role this can play in the prevention of diet-related NCDs, which will be her focus during the conference.

Garde plans to discuss “the potential of a human rights-based approach to promote the more effective regulation of the food industry to promote healthier food environments and therefore contribute to the prevention of obesity and other diet-related diseases,” she told Croakey.

A recent example of this has been her calls to regulate the marketing of unhealthy foods to children in the European Union (EU). 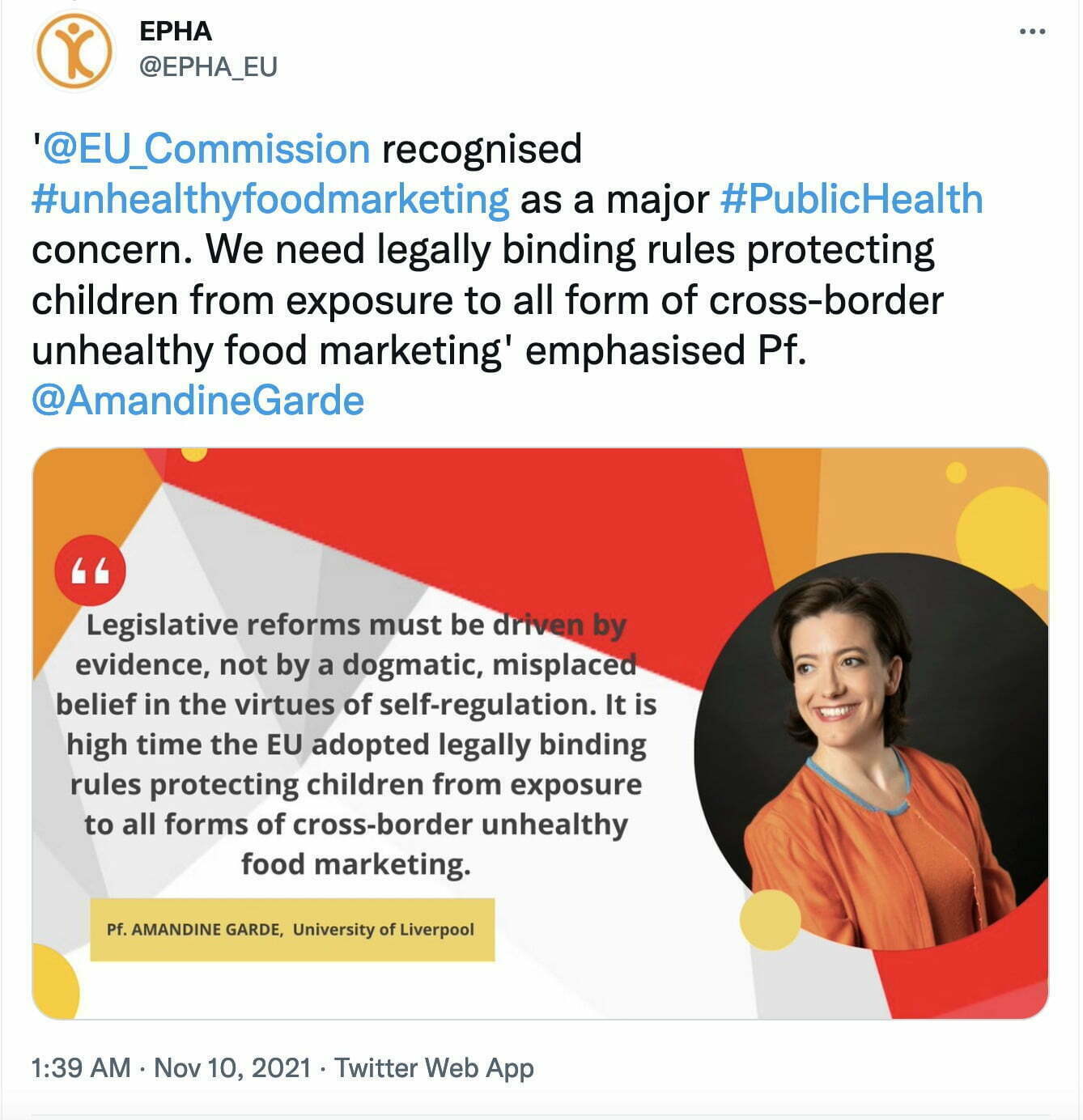 According to the World Health Organization, 39 million children under the age of five were overweight or obese in 2020 and this figure was almost ten times higher in older children and adolescents in 2016, with 340 million people aged five to 19 classed as overweight or obese.

“Rates of childhood overweight and obesity have grown very rapidly around the world, including in [low and middle-income countries], with a significant burden for the children affected (and the adults they will become), their families and communities, and societies as a whole,” explains Garde.

What drives her to push for change is the fact that obesity “is eminently preventable and raises important questions regarding the priorities that societies set themselves”, she says.

This is where the law comes in, she believes, by providing opportunities to regulate the food industry and truly effect change. Laws can ensure that States better regulate the commercial determinants of health and the food industry and do so in a way that promotes healthier food environments. This will “ensure a high level of public health, consumer and human rights protection,” says Garde. 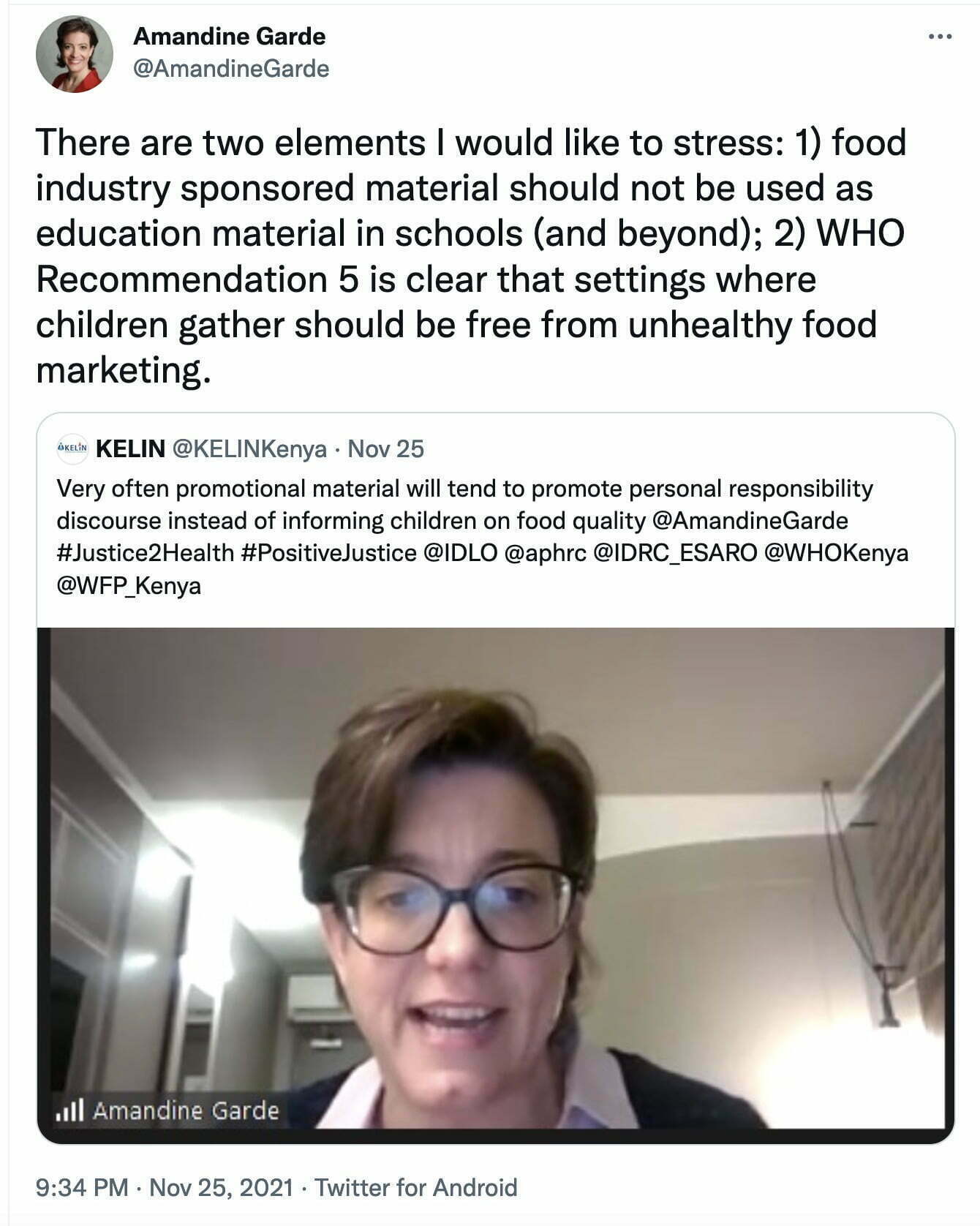 Coming together to think differently

During their keynote, Freudenberg and Garde will explore how to frame these intersecting problems of obesity, diet-related disease, and food insecurity. They also plan to discuss how to get from where we are, under the unhealthy influence of the global food industry, to a place where we have “balance between meeting human needs and assuring corporate profits”.

“By the two of us coming to this from different perspectives, we hope to engage other participants in the meeting in that conversation,” says Freudenberg.

The idea of different minds coming together is the goal of the Food Governance Conference overall, to bring together people working on all aspects of the food system, to take a “holistic view” of the challenges.

More than 100 different presentations will be given on diverse topics, with the central theme of NCD prevention and sustainable food systems.

Dr Tlaleng Mofokeng, UN Special Rapporteur on the right to health, will give a keynote discussing the importance of decolonising the food system, with a specific focus on the role of large multinational food companies in this colonisation.

Mofokeng will discuss the concept of the commercial determinants of health, in which corporations influence the social, physical and cultural environments that impact health, for example by promoting products that are detrimental to health in exchange for profit.

She then will draw attention to the resulting double burden of malnutrition – undernutrition and overnutrition – that affects one in three low and middle-income countries, and pay particular attention to the role that corporations play in “creating and maintaining the inequitable food systems that underpin this health crisis”.

In a separate keynote, Dr Namukolo Covic, Senior Research Coordinator at the International Food Policy Research Institute and Editor of the Global Food Security Journal, will also discuss outcomes from the UN Food Systems Summit, which took place in September.

Earlier this year, Covic wrote that the summit was an “important moment to garner political and financial attention to the challenges that food systems face”.

She stressed, however, that there must be “robust accountability mechanisms to ensure that commitments to address food systems challenges are upheld”. 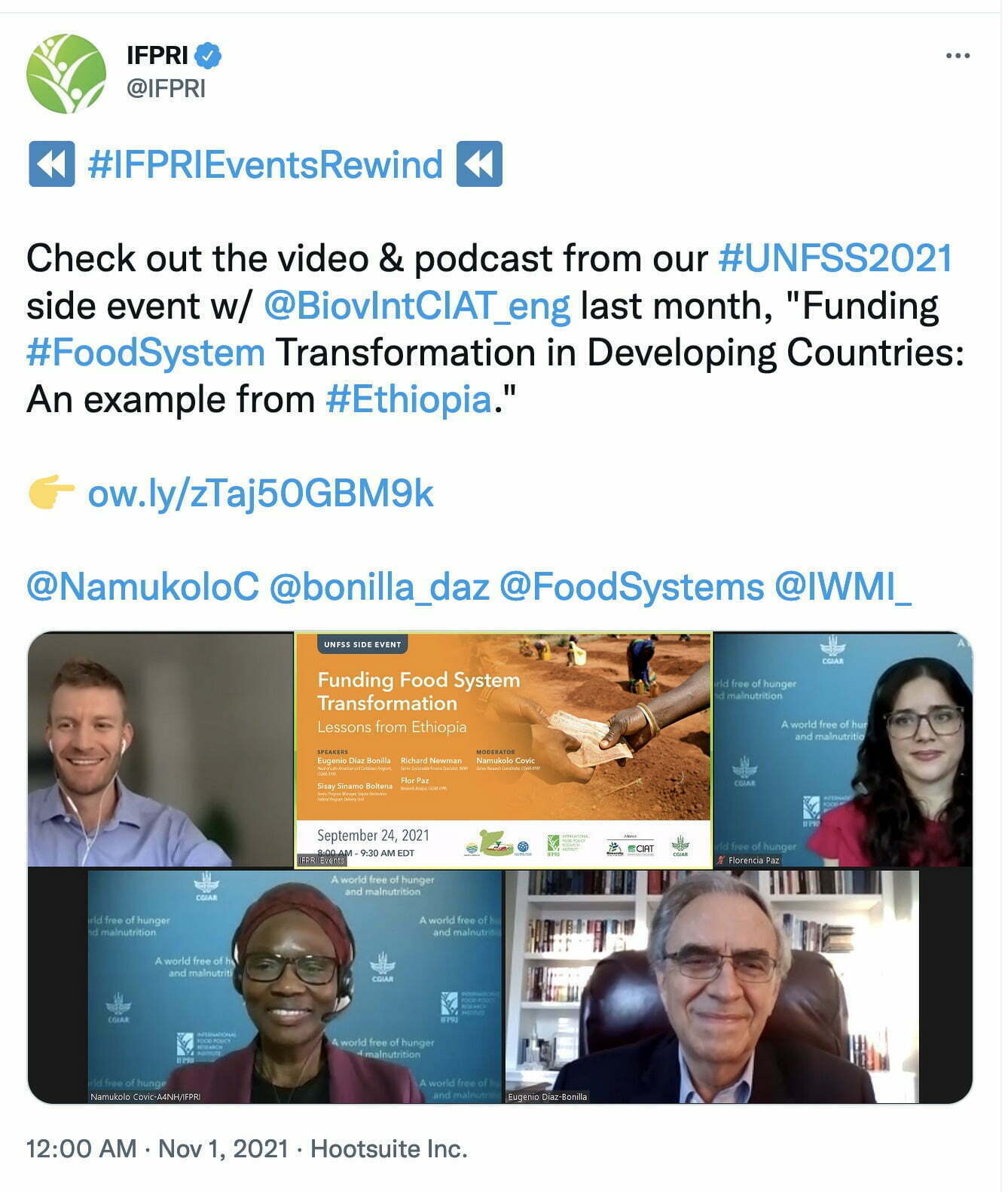 The summit saw almost 300 commitments from people around the world and across all constituencies to accelerate action and to transform food systems.

Covic will discuss related aspects of transformative food systems in conversation with Carlos Monteiro, Professor of Nutrition and Public Health at the School of Public Health, University of Sao Paulo, Brazil.

Monteiro is known for his work on the NOVA classification system, which categorises foods into four groups based on how processed they are:

Group 1 – Unprocessed or minimally processed foods, such as fruit, seeds, eggs and milk.

This system has informed a new wave of progressive policies directing people away from ultra-processed foods (UPF), and has been adopted by many countries. For example, dietary guidelines in Brazil recommend limiting consumption of group three and avoiding group four. Monteiro will discuss both outcomes from the UN food Summit and COVID’s impacts.

Other eminent speakers at the Food Governance conference include Professor Maximo Torero, Chief Economist at the Food and Agriculture Organization, and Boyd Swinburn, Professor of Population Nutrition and Global Health at the University of Auckland.

A keynote panel will discuss food governance from power and inclusivity perspectives. They will explore how state-based systems of food governance typically privilege white values, norms, and culture, while those of Black people, Indigenous people, and People of Colour are marginalised, oppressed, or problematised.

Member of the panel will include: 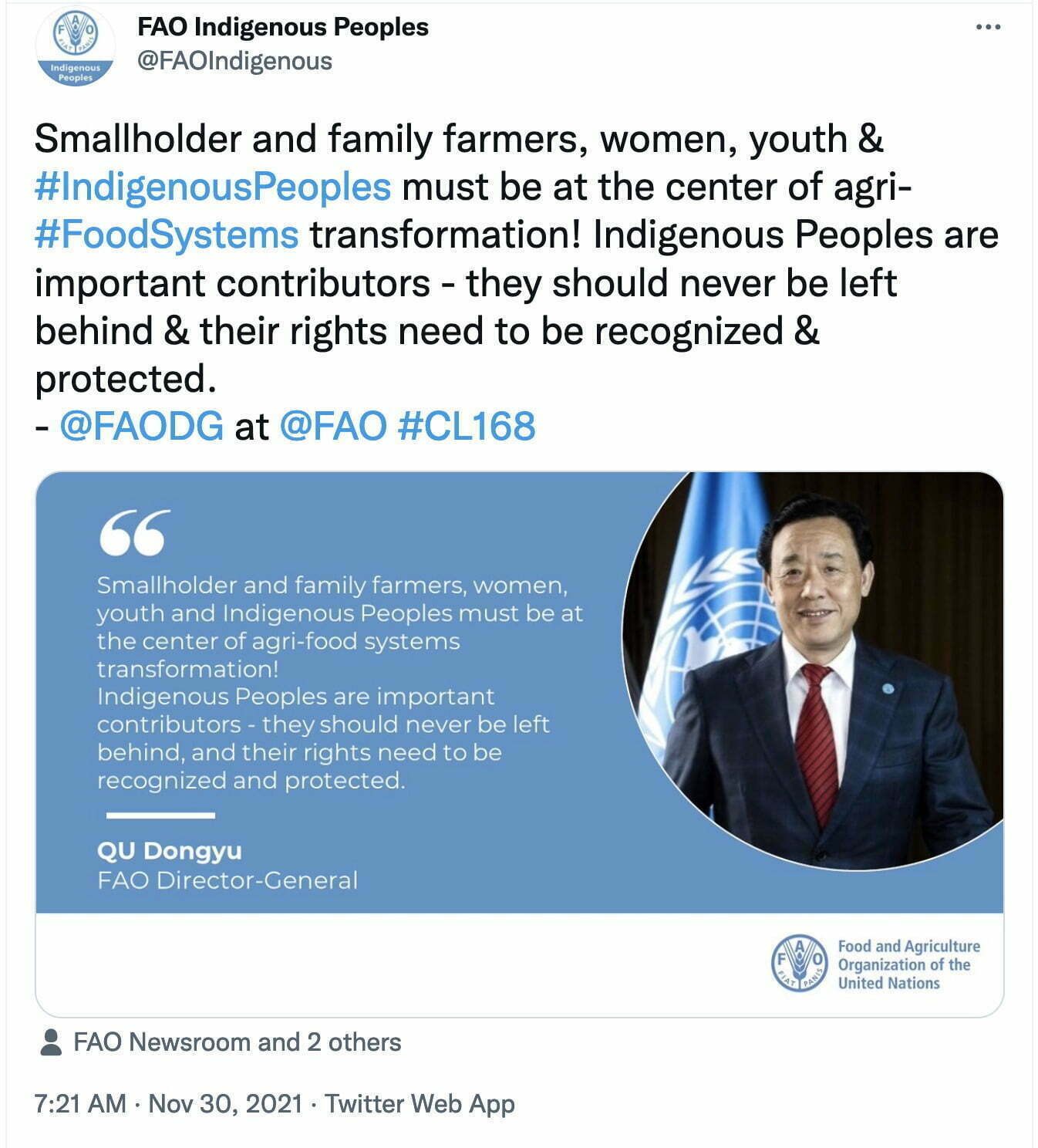 Through the broad interdisciplinary approach outlined above, the Global Food Governance conference aims to explore four key issues within our food networks:

Freudenberg is excited about the variety of disciplines coming together and hopes to use his keynote to inspire new thoughts and ideas among conference attendees.

“At this meeting, if participants come away with one or two ideas about things they could do differently the next day, or the next month, or the next year that would build their connections with other people working for change. That would be a wonderful outcome,” he says.

“In my talk, I will hope to spark some of those ideas that will enable people to think differently, and act differently, when they go back to their regular life.”

Bookmark this link to follow our coverage of the conference.