A clear message to the Australian Government by public health leaders. Photo by Joshua Hoehne on Unsplash

The World Federation of Public Health Associations (WFPHA) has written to the Australian Government calling for no new coal and gas projects.

The letter – addressed to the Prime Minister, Minister for Climate Change and Energy Chris Bowen, Minister for Health and Aged Care Mark Butler, and Minister for the Environment and Water Tanya Plibersek – urges the Government to commit to the Treaty of Non-Proliferation of Fossil Fuels.

The World Federation of Public Health Associations (WFPHA) is a signatory to the Health call for a Fossil Fuel Non-Proliferation Treaty to protect the lives of current and future generations. This letter, which outlines the scientific evidence linking fossil fuel extraction with direct health harms, can be seen here.

The first, and most urgent action is to end the expansion of any new fossil fuel infrastructure and production. The second is to phase out existing production and use of fossil fuels in a fair and equitable, and the third is fast-track real solutions and ensure a just transition for every worker, community, and country, creating a healthy and sustainable future for all.

We cannot overestimate the significance of this health Call for a Non-Proliferation Treaty. Signatories include the World Health Organization, in addition to major health groups within Australia, as well as the Dalai Lama & over 100 other Nobel Laureates, and more than 230 legislators in 63 countries.

Non-Proliferation of fossil fuels has global support. Australia’s past track record on Climate Change action has not been well received. The World and health leaders greeted the Australian 2022 Federal Election result as a signal of Australia’s welcome re-entry into the climate struggle. As the second largest exporter of coal and gas, the actions of the Australian Government have a significant impact on the health of the world’s population. Opening new coal or gas extraction sites runs contrary to the good progress made elsewhere and undisputedly drives climate change’s destruction of lives, health and happiness.

The Fossil Fuel Non-Proliferation Treaty is further supported by the United Nations General Assembly, which on July 28th this year, voted unanimously to adopt a resolution declaring access to a clean, healthy and sustainable environment a universal human right.

Countries most vulnerable to the effects of climate change, and the global citizenry will be extremely disappointed to learn that their hopes for an enlightened climate sensitive Australia were based only on campaign rhetoric. On behalf of the WFPHA, and speaking for the global population, for their health and human right to a healthy future, we respectfully urge the Government of Australia to review this treaty, heed our call, and commit to the Treaty of Non-Proliferation of Fossil Fuels.

National economic benefits to be gained from exporting fossil fuels brings opportunities for governments to provide for their population’s health and welfare. This is understood.

However, the current state of the global climate is exerting far reaching damage to global health, and we know this trend is accelerating. At a time when the Intergovernmental Panel on Climate Change calls for a reduction in emissions to prevent a global catastrophe, we urge the Australian Federal Government to reconsider its decision to allow new coal or gas projects to proceed. When all of the health, economic, and environmental effects are taken into account, this decision will have grave consequences for the future of Australia, and the world.

Meanwhile, Resources Minister Madeleine King recently told an event hosted by the Queensland Resources Council that “I will continue to work with you, Australia’s gas and LNG producers, as well as state and territory governments, to encourage new supply.” 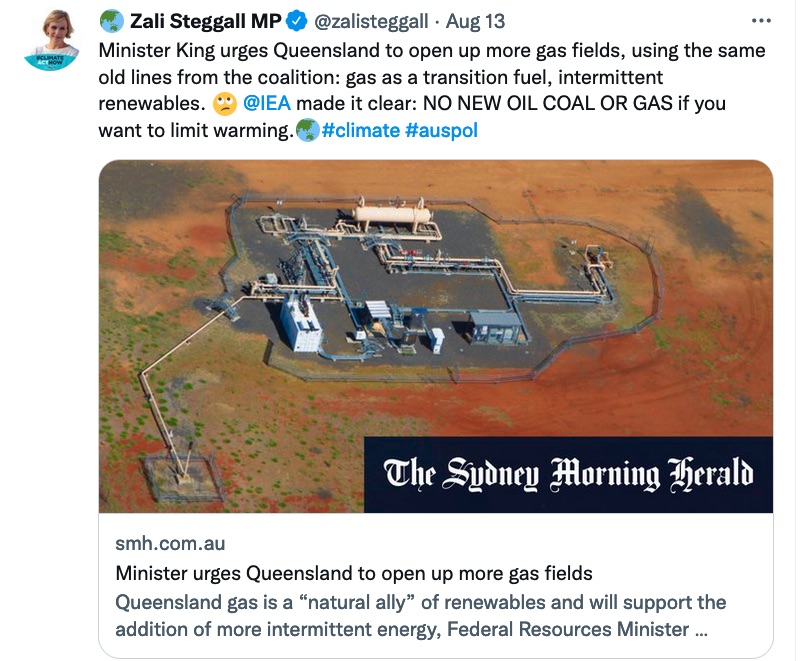 See Croakey’s archive of articles on climate change and health