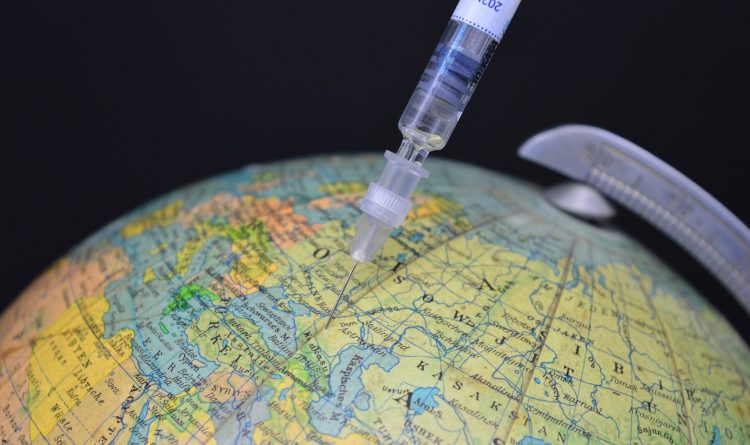 Around 10% of the global population had been fully vaccinated, nearly all of them in rich countries. Image by Frauke Riether from Pixabay.

Introduction by Croakey: As Sydney’s Bondi COVID cluster grew to 31 cases this week, restrictions were once again ramped up and borders were closed.

The latest outbreak comes as criticisms of Australia’s sluggish vaccination rollout continued, prompting the Federal Government to release its “allocation horizons” roadmap. From October to December this year, up to 2.3 million Pfizer doses and 615,000 Moderna doses will be available per week, according to the plan, while Astra Zeneca will be available on request.

But local vaccination rates are just one part of the story. As Associate Professor Maria De Jesus of the American University School of International Service writes below, so far only 0.9% of people in low-income countries have received at least one dose of COVID vaccine.

And, she writes, as long as “the world has unvaccinated populations, COVID-19 will continue to spread and mutate. Additional variants will emerge”.

It’s a timely call as India today raised the alarm about a new variant of concern in India — the so-called Delta-plus variant.

In the race between infection and injection, injection has lost.

Public health experts estimate that approximately 70% of the world’s 7.9 billion people must be fully vaccinated to end the COVID-19 pandemic. As of June 21, 2021, 10.04% of the global population had been fully vaccinated, nearly all of them in rich countries.

Only 0.9% of people in low-income countries have received at least one dose.

I am a scholar of global health who specialises in health care inequities. Using a data set on vaccine distribution compiled by the Global Health Innovation Center’s Launch and Scale Speedometer at Duke University in the United States, I analysed what the global vaccine access gap means for the world.

Supply is not the main reason some countries are able to vaccinate their populations while others experience severe disease outbreaks – distribution is.

Many rich countries pursued a strategy of overbuying COVID-19 vaccine doses in advance. My analyses demonstrate that the U.S., for example, has procured 1.2 billion COVID-19 vaccine doses, or 3.7 doses per person. Canada has ordered 381 million doses; every Canadian could be vaccinated five times over with the two doses needed.

Overall, countries representing just one-seventh of the world’s population had reserved more than half of all vaccines available by June 2021. That has made it very difficult for the remaining countries to procure doses, either directly or through COVAX, the global initiative created to enable low- to middle-income countries equitable access to COVID-19 vaccines.

Haiti has received about 461,500 COVID-19 vaccine doses by donations and is grappling with a serious outbreak.

Even COVAX’s goal – for lower-income countries to “receive enough doses to vaccinate up to 20% of their population” – would not get COVID-19 transmission under control in those places.

The cost of not cooperating

Last year, researchers at Northeastern University modeled two vaccine rollout strategies. Their numerical simulations found that 61% of deaths worldwide would have been averted if countries cooperated to implement an equitable global vaccine distribution plan, compared with only 33% if high-income countries got the vaccines first.

Put briefly, when countries co-operate, COVID-19 deaths drop by approximately in half.

Vaccine access is inequitable within countries, too – especially in countries where severe inequality already exists.

In Latin America, for example, a disproportionate number of the tiny minority of people who’ve been vaccinated are elites: political leaders, business tycoons and those with the means to travel abroad to get vaccinated. This entrenches wider health and social inequities.

The result, for now, is two separate and unequal societies in which only the wealthy are protected from a devastating disease that continues to ravage those who are not able to access the vaccine.

A repeat of AIDS missteps?

This is a familiar story from the HIV era.

In the 1990s, the development of effective antiretroviral drugs for HIV/AIDS saved millions of lives in high-income countries. However, about 90% of the global poor who were living with HIV had no access to these lifesaving drugs.

Concerned about undercutting their markets in high-income countries, the pharmaceutical companies that produced antiretrovirals, such as Burroughs Wellcome, adopted internationally consistent prices. Azidothymidine, the first drug to fight HIV, cost about US$8,000 a year – over $19,000 in today’s dollars.

The crisis over inequitable access to AIDS treatment began dominating international news headlines, and the rich world’s obligation to respond became too great to ignore.

“History will surely judge us harshly if we do not respond with all the energy and resources that we can bring to bear in the fight against HIV/AIDS,” said South African President Nelson Mandela in 2004.

A dose of global cooperation

It took over a decade after the development of antiretrovirals, and millions of unnecessary deaths, for rich countries to make those lifesaving medicines universally available.

It is not yet clear how their plan to “vaccinate the world” by the end of 2022 will be implemented and whether recipient countries will receive enough doses to fully vaccinate enough people to control viral spread. And the late 2022 goal will not save people in the developing world who are dying of COVID-19 in record numbers now, from Brazil to India.

The HIV/AIDS epidemic shows that ending the coronavirus pandemic will require, first, prioritizing access to COVID-19 vaccines on the global political agenda. Then wealthy nations will need to work with other countries to build their vaccine manufacturing infrastructure, scaling up production worldwide.

Finally, poorer countries need more money to fund their public health systems and purchase vaccines. Wealthy countries and groups like the G-7 can provide that funding.

These actions benefit rich countries, too. As long as the world has unvaccinated populations, COVID-19 will continue to spread and mutate. Additional variants will emerge.

As a May 2021 UNICEF statement put it: “In our interdependent world no one is safe until everyone is safe.”

Disclosure statement
Maria De Jesus does not work for, consult, own shares in or receive funding from any company or organisation that would benefit from this article, and has disclosed no relevant affiliations beyond their academic appointment.

PrevPreviousStolen wages: Northern Territory class action will hold the Commonwealth to account
NextAs yet another extreme weather event hits hard, where is the health response?Next