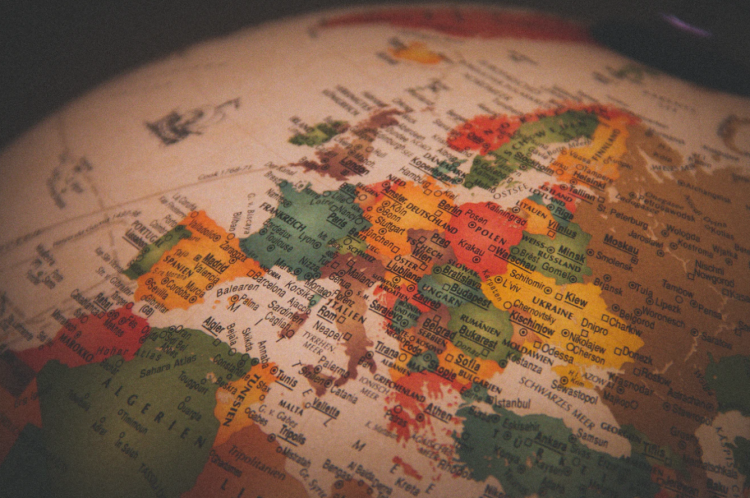 The newly released 2019 Global Burden of Diseases, Injuries and Risk Factors study, which explores 286 causes of death in 204 countries and territories to reveal the state of the world’s health just before the COVID-19 pandemic, identifies a steady rise of risks that may pose a “massive threat” to global health and see the world approach a “turning point” in terms of life expectancy.

The report calls for better policy and funding to address leading risk factors but it also prompts urgent warnings on embedded structured inequalities and the climate crisis and the need for a fundamental rethink on global migration policy which will ultimately determine “whether humanity prospers or withers”.

Despite  welcome progress on health over the last several decades, but the world may be approaching a turning point on life expectancy gains due to the “massive threat” of lifestyle-driven non-communicable disease, a landmark study has warned. 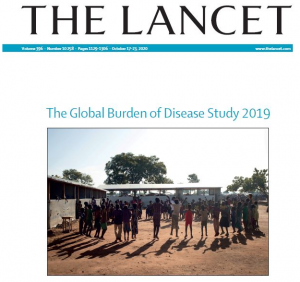 The 2019 Global Burden of Diseases, Injuries and Risk Factors (GBD) study, published in the latest edition of The Lancet, has examined levels and trends in health outcomes across 204 countries and territories, mapping both progress and its threats.

While there had been advancement on some metrics, such as household air pollution, child growth failure, unsafe water, sanitation and handwashing, and exposure to smoking, the study showed some key risks to health were on the rise.

Among the 21 leading risk factors attributable to disability-adjusted life-years, high systolic blood pressure, fasting plasma glucose and body mass index, and alcohol and other drug use were selected by the authors as standout examples, along with ambient particulate matter pollution, because rates of exposure were increasing by more than 0.5 percent per year.

“The steady rise of these risks is likely to pose a massive threat to future health progress everywhere,” the authors wrote.

“The increase in exposure to key metabolic risks and the slowing or reversals of long-term reductions in cardiovascular diseases seen in some locations suggests that the world might be approaching a turning point in terms of life expectancy gains.”

Learn from lessons of tobacco control

Pointing to significant global progress on smoking (1.2 percent reduction per year since 2010) as a result of various taxation, legislative and other policy initiatives, the authors said concerted public health action and public policy would be required to address the growing burden of non-communicable disease, particularly in low and low-middle socioeconomic settings.

“The failure to slow or reverse the global rise in BMI, to facilitate healthier diets, or to increase amounts of physical activity is probably partly due to inadequate policy attention and funding for public health action and behavioural risks,” they said.

Noting that context, education and availability of alternatives were key drivers of choice, they dismissed as “naïve” arguments that individual freedoms should trump government action on behavioural risks:

Governments can and should take action to facilitate healthier choices by rich and poor individuals alike. When there is a major risk to population health, concerted government action through regulation, taxation and subsidies, drawing lessons from decades of tobacco control, might be required to protect the public’s health.”

This was underscored by the emergence of urgent new challenges including rising global temperatures due to climate change and associated increases in poverty, as well as the social, economic and political challenge of declining fertility in many nations and accompanying, often incendiary, debates around immigration. 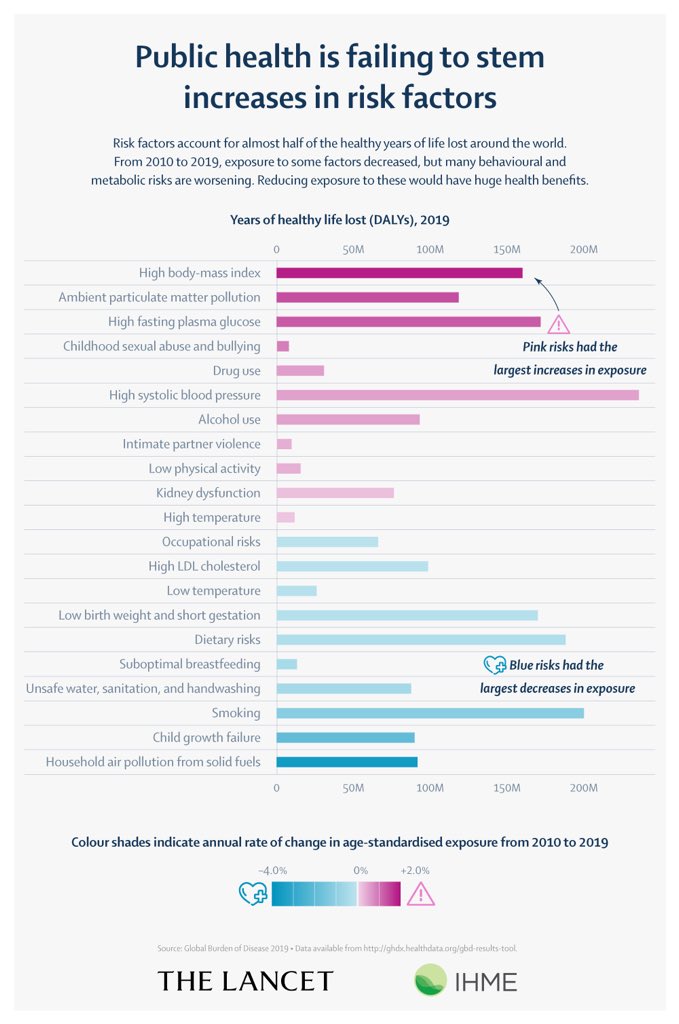 In an accompanying commentary, Ibrahim Abubakar, chair of the UCL-Lancet Commission on migration and health, said the dilemma of shrinking working age populations and burgeoning older, dependent, citizenry could lead to declining life expectancy and quality of life and worsening inequality, and a “fundamental rethink of global politics” was required.

“An equitable change in global migration policy will need the voice of rich and poor countries… Furthermore, global cooperation has to address the causes of conflict and environmental crises that will challenge any attempt at making migration work for human health and prosperity,” wrote Abubakar.

The positive impacts of migration on health and economies are known globally. The choice that we face is whether we improve health and wealth by allowing planned population movement, or if we end up with an underclass of imported labour and unstable societies.

The Anthropocene has created many challenges such as climate change and greater global migration. The distribution of working age populations will be crucial to whether humanity prospers or withers.”

There was also a separate commentary on progress towards universal health coverage which noted overall improvements between 1990 and 2019 but also “persistent, large divides” between wealthier and “lower income fragile” states.

It also underscored the value of public insurance schemes over out-of-pocket spending, a finding the authors said “will challenge current spending envelopes and financing modalities for health care in many countries”.

Importantly, the authors also stressed that universal health care, as a metric, failed to capture important nuance and misdirected accountability to global bodies and academics instead of those with a real, lived stake in its outcomes: a nation’s citizens.

“As the world grapples with the adverse consequences of globalisation, diminishing trust in experts and data, and growing awareness of structural racism, sexism, and imbalances in global power, it is time to ask: for whom is this measure?” they asked.

The Lancet editor Richard Horton said the latest GBD study “raises uncomfortable questions about the direction global health has taken in the 21st century”, asking whether health leaders and advocates had been missing “the most important determinants of human health”.

“An exclusive focus on health care is a mistake. Health is created from a broader prospectus that includes the quality of education (primary to tertiary), economic growth, gender equality and migration policy,” he wrote.

Horton said the study had immediate relevance to COVID-19 control, with success requiring a strategy far beyond control of community transmission:

COVID-19 is a syndemic of coronavirus infection combined with an epidemic of non-communicable diseases, both interacting on a social substrate of poverty and inequality.

The message of GBD is that unless deeply embedded structural inequalities in society are tackled, and unless a more liberal approach to immigration policies is adopted, communities will not be protected from future infectious outbreaks, and population health will not achieve the gains that global health advocates seek.

It’s time for the global health community to change direction.” 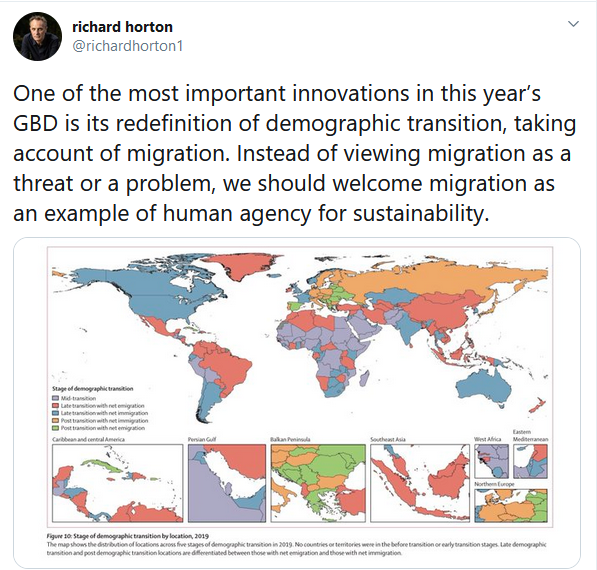 The study contains a wealth of data, including two-page summaries on 371 separate diseases, injuries and impairments, and 83 risk factors. For example, the data shows: 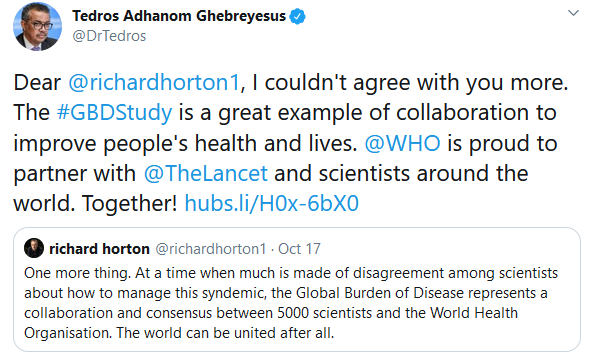 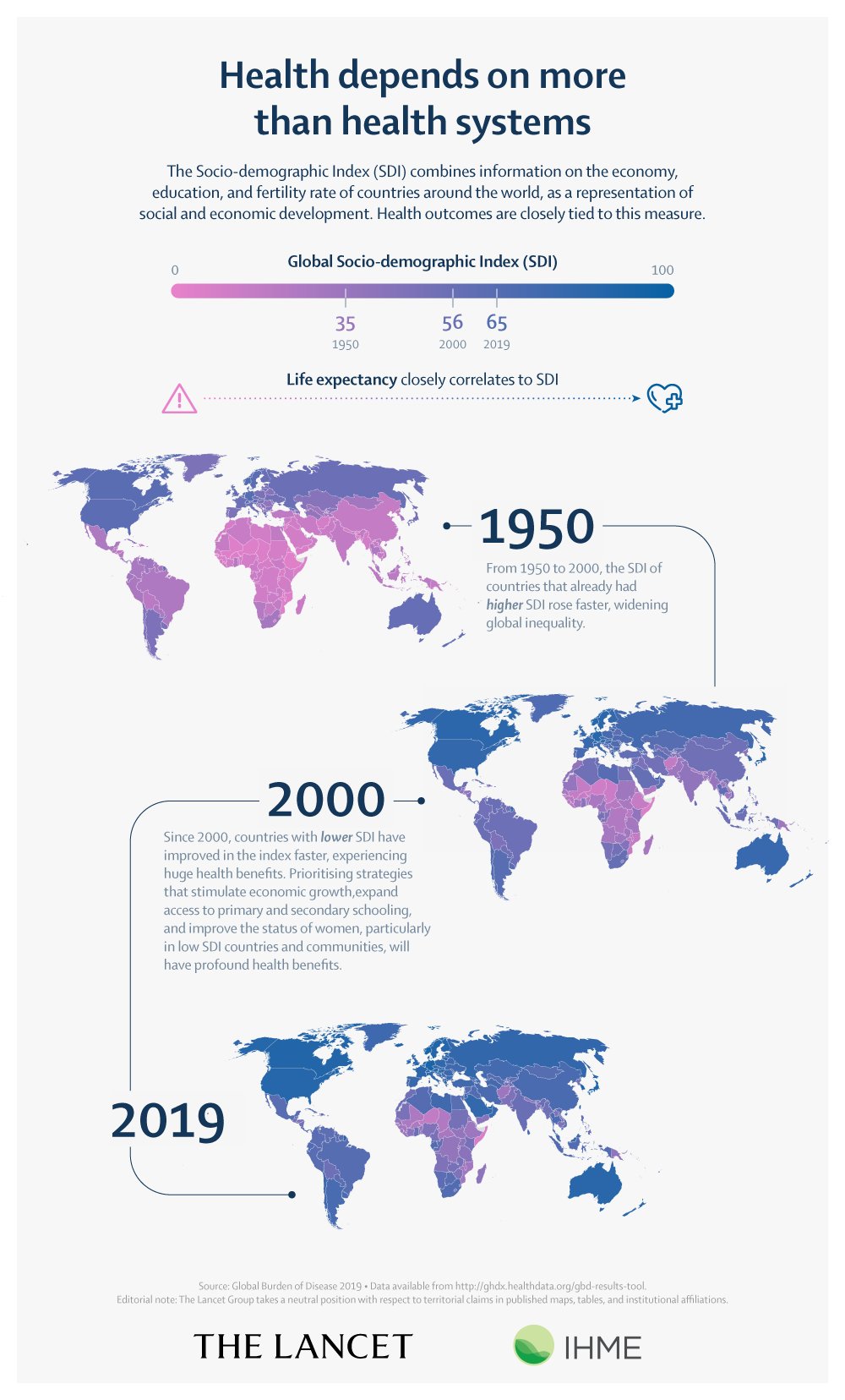