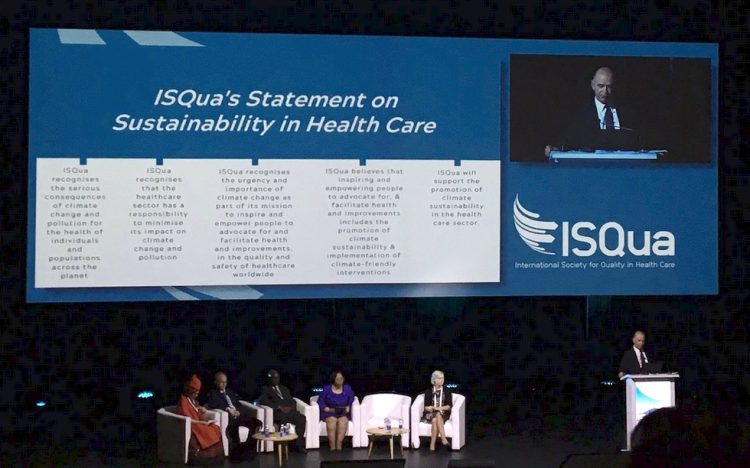 Focus on sustainability in healthcare. Image via @hcointox

From international healthcare conferences to local community organisations and the corridors of Canberra, momentum is building for healthy climate action.

The International Society for Quality in Health Care (ISQua) has urged the health sector to reduce its climate footprint and to embed climate sustainability within its work to improve healthcare.

At its 36th international conference, taking place in South Africa this week, ISQua released a Statement on Sustainability in Health Care recognising “the serious consequences of climate change and pollution for the health of individuals and populations across the planet”.

The statement, calling for climate-friendly interventions to be part of healthcare improvement, is a call-to-action to health agencies, policy makers and health services. Croakey has asked Minister Greg Hunt’s office for comment.

As well, a session at the conference today is “devoted to the one signature public health issue of our times: how to counter the pervasive adverse effects of climate change on health and, accordingly, how to redesign the health care sector as to provide a more sustainable, ‘green’ care”.

According to one of the speakers, Dr Hans C Ossebaard, an innovation and eHealth advisor at the Dutch National Health Care Institute, the session will examine healthcare can achieve lower greenhouse gas emissions, reduce pollution, and encourage circular economics and healthy environments while maintaining quality and safety in care.

Ossebaard will review the Dutch ‘Green Deal’ approach to healthcare and the potential of eHealth technologies or “green IT” to accelerate sustainability in healthcare.

For more on climate discussions at #ISQua2019, see this Twitter thread, and for more news from the conference follow @WePublicHealth, where this week’s guest-tweeters are from the Australian Institute of Health Innovation at Macquarie University in Sydney. 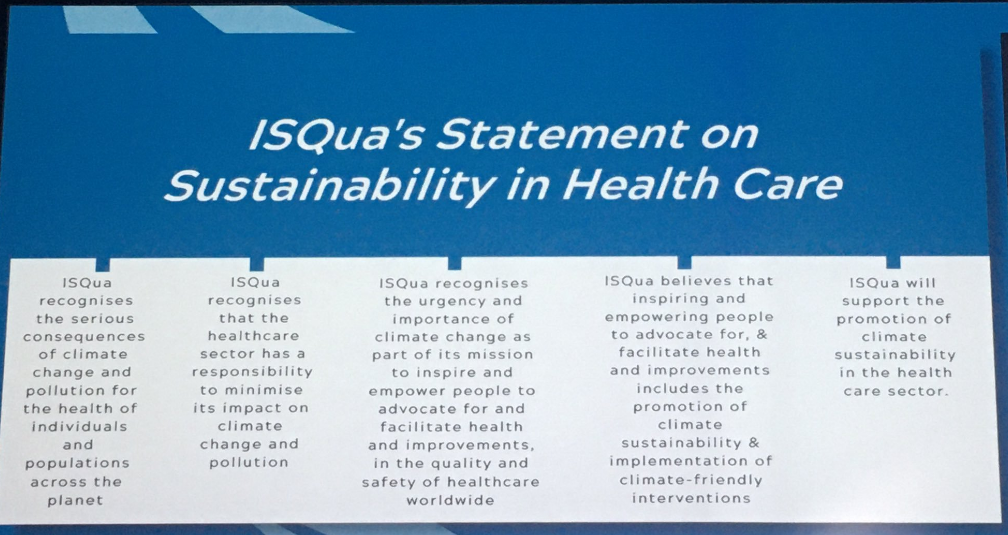 Meanwhile, the Victorian Council of Social Service (VCOSS) yesterday released a report, A climate of fairness: Making Victoria’s climate change transition fair & equitable, calling for climate responses to be equitable and to address the needs of people on fixed or low incomes, social housing tenants, people with a disability or health challenge, Aboriginal people and those living in farming, coastal or rural communities.

VCOSS CEO Emma King wrote in the report that:

A truly equitable response to climate change puts the people, communities and organisations that are being hardest hit by global warming at the forefront of decision-making, planning and delivery – and funds them accordingly.

It prioritises support to those individuals and groups who need the most assistance to adapt to the changing climate.”

Recommendations for the health sector are:

The report includes case studies illustrating how the climate crisis is affecting communities: 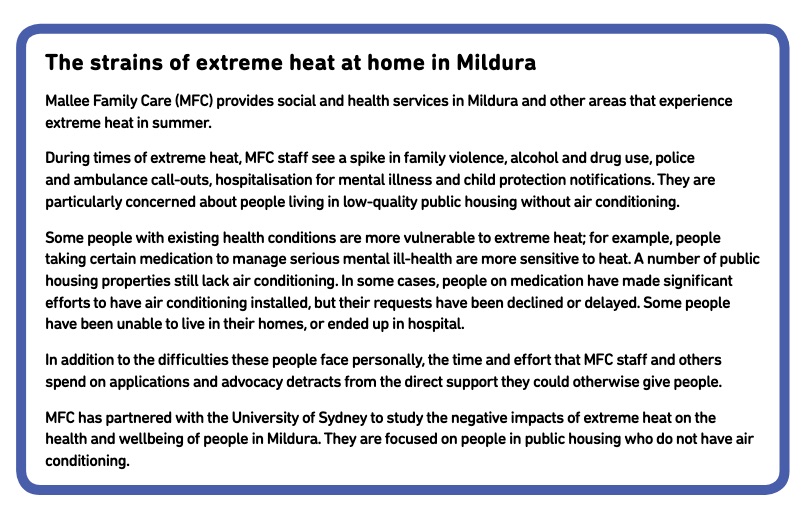 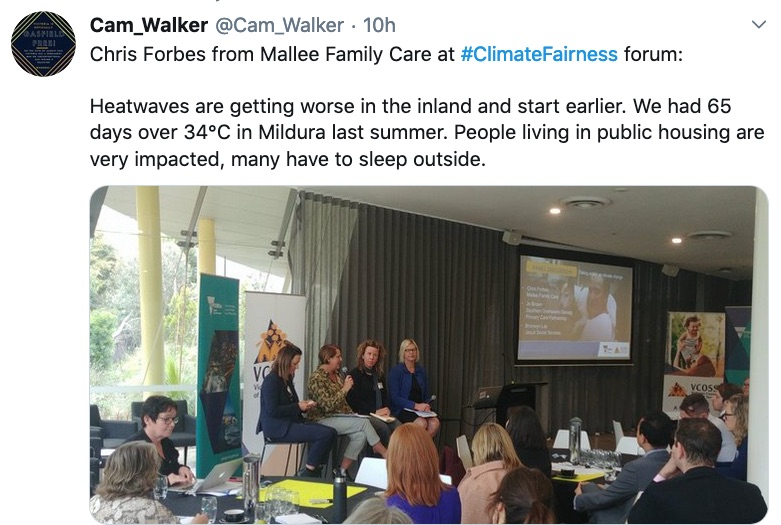 Asked how the health, community, environment and research sectors could better respond to the climate crisis, McInerney tweeted that participants’ suggestions included: 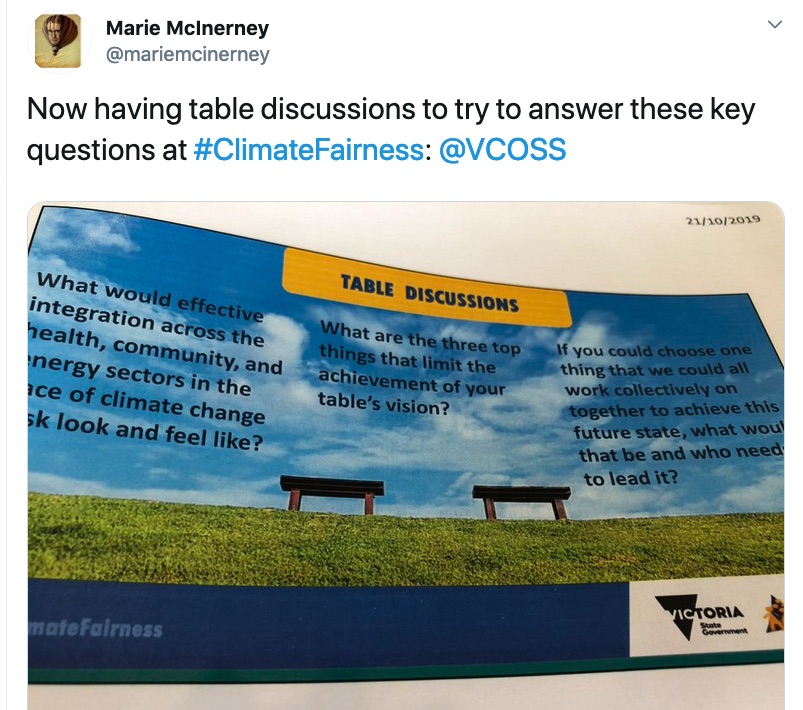 Health Minister Greg Hunt was conspicuous by his absence from a Parliamentary briefing on climate and health, hosted by the crossbench-led Parliamentary Friends of Climate Action group in Canberra on 14 October, which was attended by more than 60 MPs.

His absence was not surprising, however, given the history of the Australian Government’s inaction on climate and health since a detailed roadmap for national action on climate was launched in Parliament House in Canberra in June 2017, The Framework for a National Strategy on Climate, Health and Well-being for Australia.

Presentations highlighted the devastating health impacts of extreme heat, the climate crisis as a “poverty multiplier”, the existential threat to many Australian communities, and the work to build a health movement for climate action. 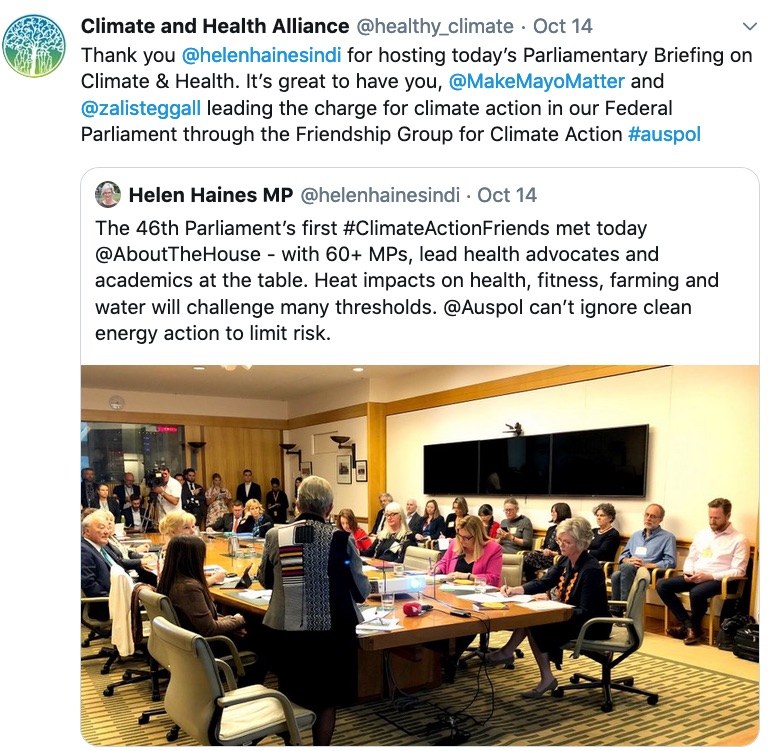 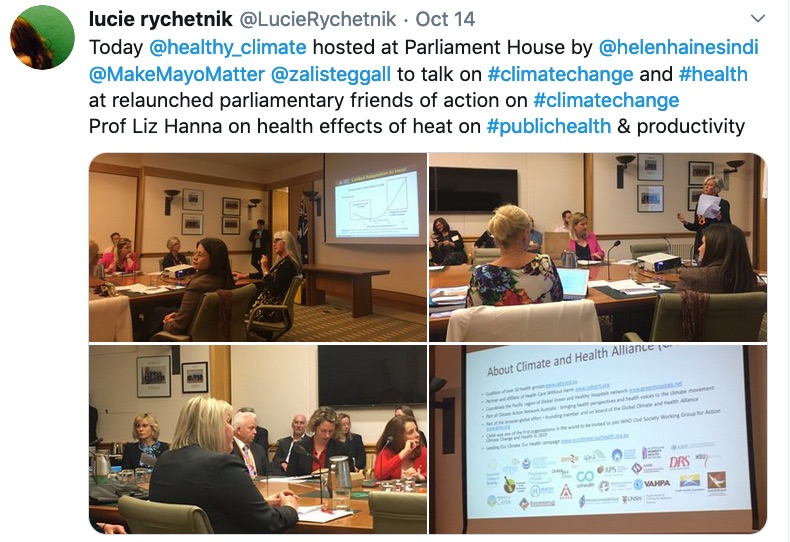 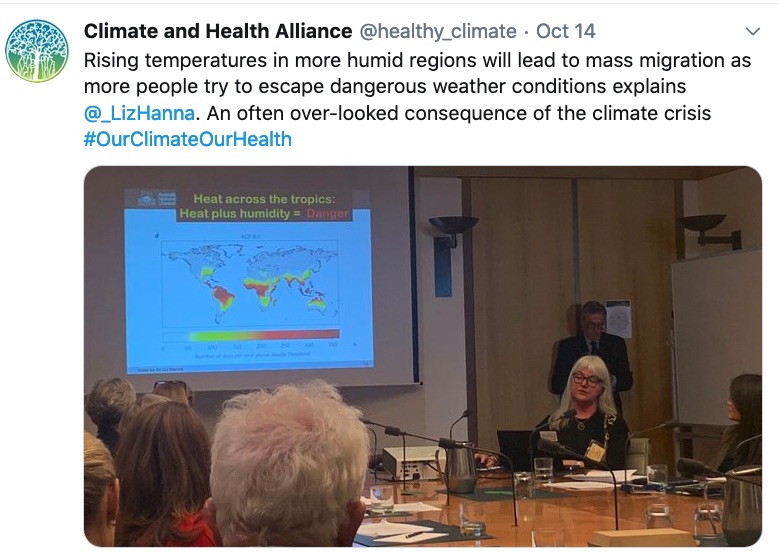 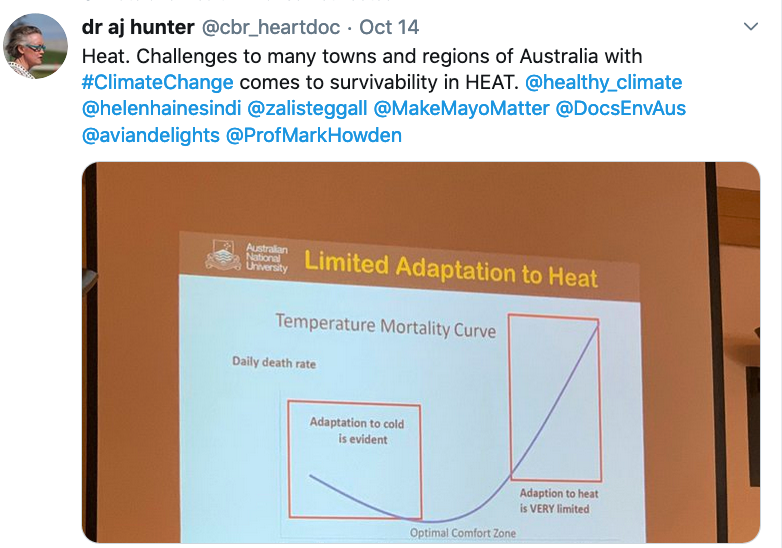 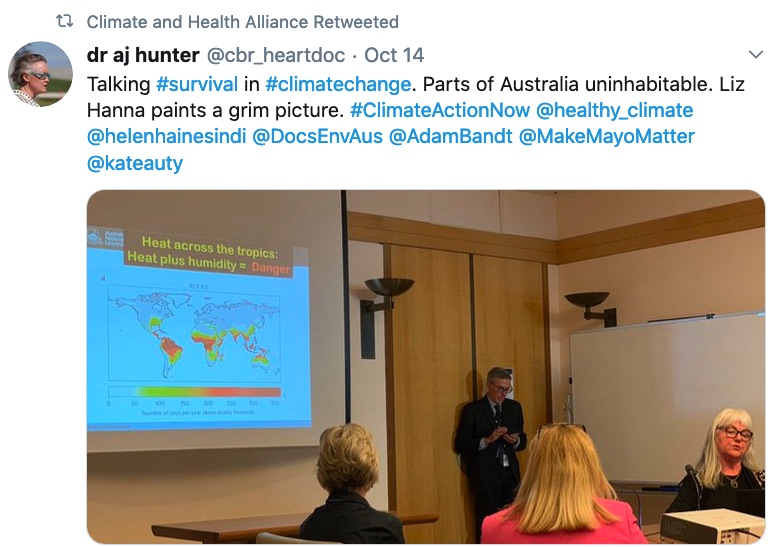 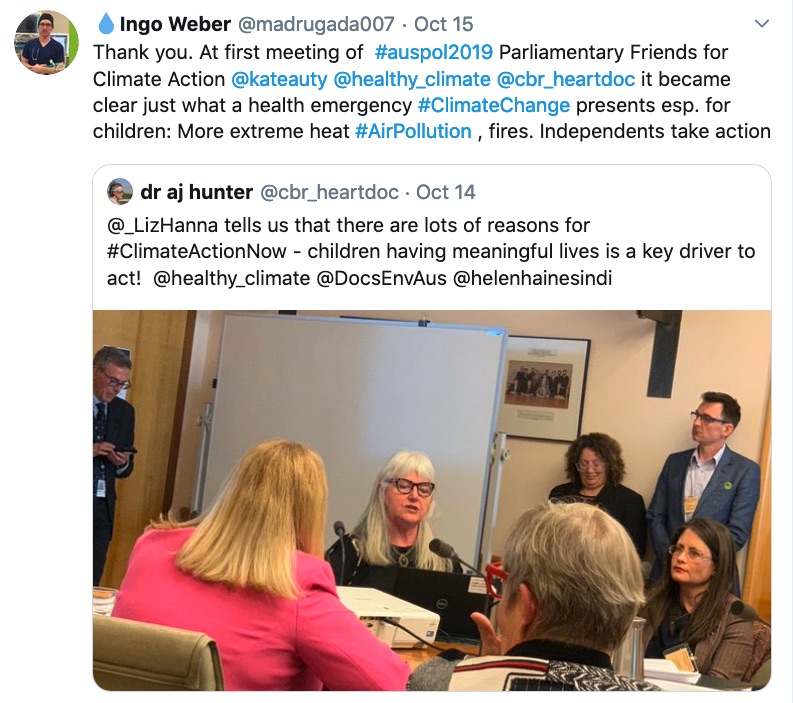 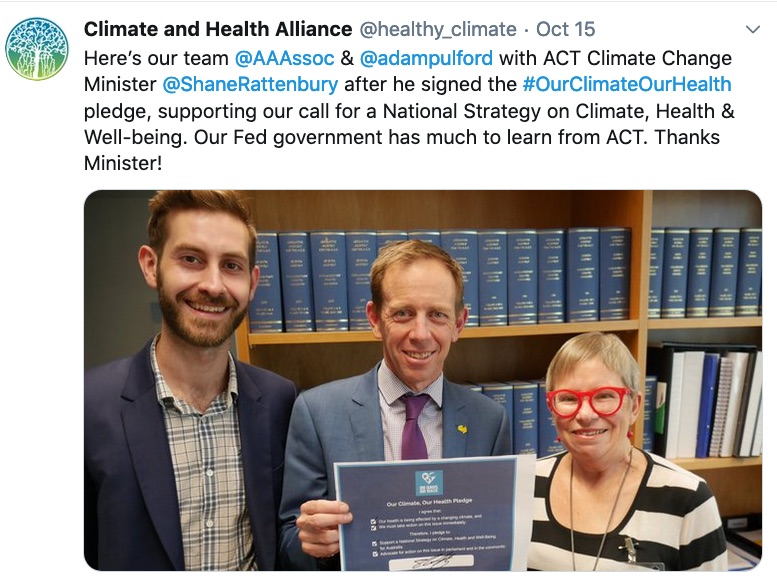 See more tweets from the event.

Coincidentally, the Government’s “talking points” for 14 October (notes distributed to MPs providing advice on likely topics of media questioning and suggested responses) were inadvertently sent to the media on the day of the climate and health briefing.

While the notes suggest the Government is sensitive to criticisms of its climate record, the absence of climate and health concerns from the document (despite at least one media report previewing the meeting) indicate that the Government’s political radar is not registering the health sector’s growing advocacy.

Perhaps that is as much a reflection of how the mainstream media is covering the climate and health crisis – intermittently, at best.

Given the entrenched opposition within the Government to effective climate action, it will likely take some media heat to generate political will for change, as suggested in the tweet below by Ray Wills, Adjunct Professor at the University of Western Australia. 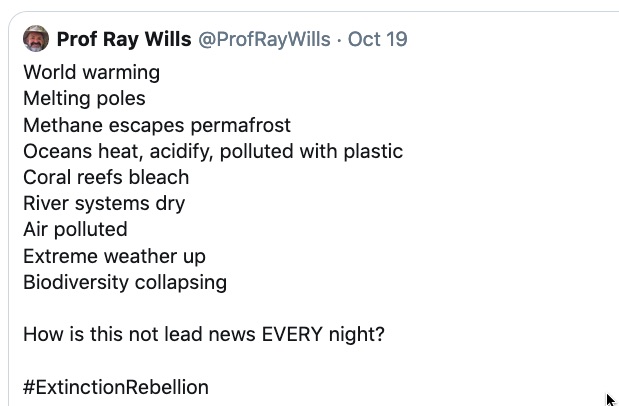 In the past week, more than 1,000 people have responded to calls by the Climate and Health Alliance (CAHA) to sign an online petition urging Nine Publishing, the new owners of The Age and Sydney Morning Herald, to increase and improve their coverage of the climate crisis.

The Alliance launched the petition after being approached by Nine Publishing to help fund an advertorial series on climate change (which has since been dropped).

Don’t get us wrong, we understand the business model for news, and journalism more broadly, is under immense strain, and these kinds of advertising features bring in much needed resources to fund important public-interest journalism, work that The Age and the SMH does so much of.

But we’re in the middle of a crisis — the biggest threat to our health & our society that humanity has ever faced. Despite this, every day is a struggle to get the climate crisis properly reported on. We desperately need ALL media outlets to cover climate on a daily basis.

From explaining the causes of climate change & its impacts, including on human health, to communicating the solutions we have within our reach right now, and holding those in power to account for their actions (and inaction) — there is so much that deserves attention.”

Meanwhile, coming up soon in Canberra 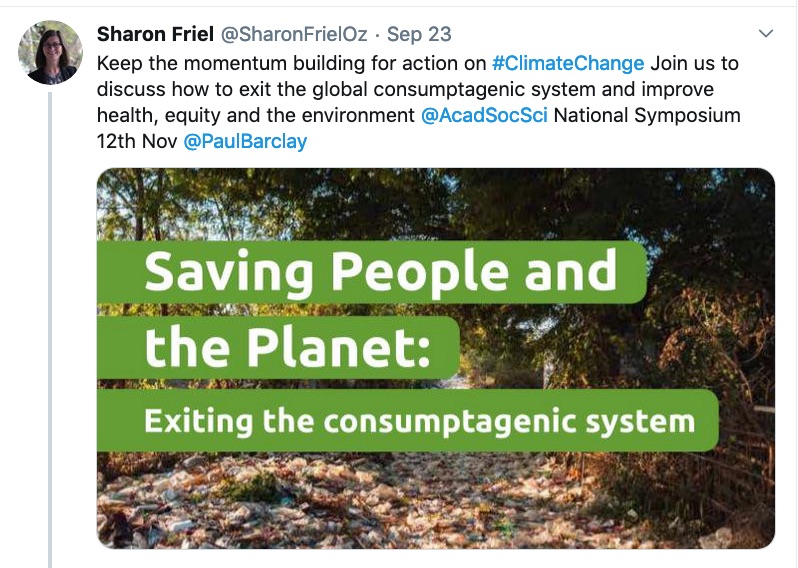 This article is published as part of Croakey’s ongoing contribution to the Covering Climate Now initiative, an unprecedented collaboration that involved more than 300 media outlets around the world in the leadup to a Climate Action Summit at the United Nations General Assembly in New York on 23 September. It is co-founded by The Nation and the Columbia Journalism Review (CJR), in partnership with The Guardian. Croakey invites our readers, contributors and social media followers to engage with these critical discussions, using the hashtag #CoveringClimateNow. See Croakey’s archive of climate and health coverage.

PrevPreviousProgress on the road to integrated care: download your #CPHCE19 conference report
NextTo reduce stillbirths, we must tackle substandard careNext