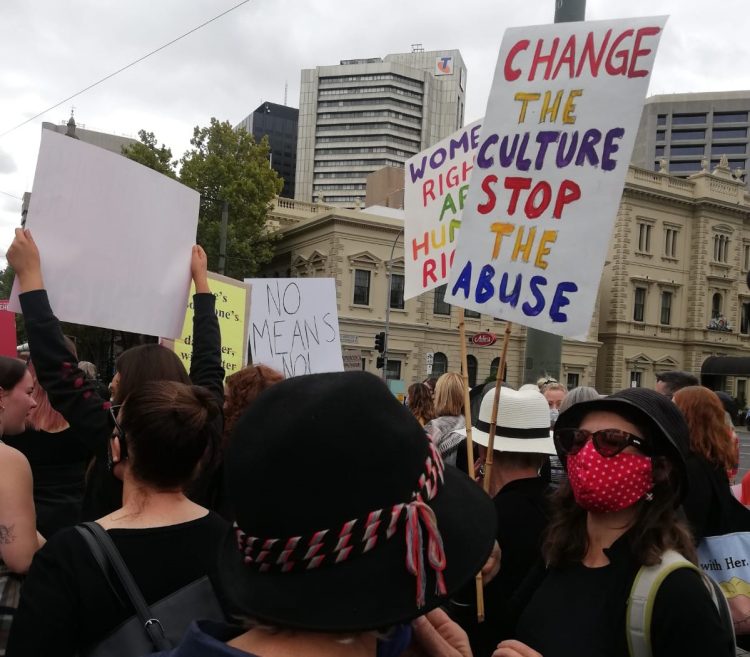 The March4Justice rally in Adelaide was one of many across the country, with women saying 'Enough is enough' and calling for a new approach to women's issues from the Federal Government.

Introduction by Croakey: In response to rallies across the country protesting its approach to women in the wake of allegations of sexual abuse and harassment at the heart of Parliament, the Federal Government handed down a special Women’s Budget Statement in the 2021-22 Budget.

It promises a $3.4 billion investment so Australian women can be safe from violence, economically secure, realise their potential and enjoy good health.

However, while significant funding has been committed to support women’s safety, detailed analysis by women’s and social services organisations has found the Budget will not significantly improve economic security for low-income women or deliver on the need for structural and cultural change.

Croakey journalist Linda Doherty summarises findings from the Australian Council of Social Service (ACOSS) Post-Budget Gender Analysis and the National Foundation for Australian Women’s Gender Lens on the Budget  below.

A grim statistic of COVID-19 is the surge in rates of violence against Australian women, with the Federal Government confirming that two-thirds of women abused by a current or former partner reported the violence had started or escalated since the pandemic began in early 2020.

“Specific groups of women were more likely to have experienced physical and sexual violence during this time, including Aboriginal and Torres Strait Islander women, women aged 18–24, women with a restrictive health condition, pregnant women, and women in financial stress,” the Women’s Budget Statement said.

More than $1 billion was committed in the Budget for women’s safety prevention and response services but critics have said in key analyses of the women’s package that the funding did not meet unmet demand.

That’s especially so for Aboriginal and Torres Strait Islander women, according to Antoinette Braybrook, co-chair of Change the Record, who said that First Nations’ women faced a national crisis of family violence but the Government had failed to adequately fund services to keep women safe.

“To provide the crucial frontline services our women need, our 14 family violence legal prevention services require an additional investment of at least $28 million per year,” said Braybrook, who is also chair of National Family Violence Prevention and Legal Services.

“The Budget delivers less than a quarter of that vitally needed funding, and contains no dedicated funding for our National Family Violence Prevention and Legal Services Forum, denying First Nations’ women a voice shaping the policy decisions that affect our lives.”

Australian Council of Social Service CEO Cassandra Goldie said in a media release the funding would provide a much-needed boost for family and domestic violence services but more money was needed to address the demand for services.

“The widespread unmet demand for services is a barrier to improving women’s safety,” she said.

People with Disability Australia president Samantha Connor described the commitments as a “paltry” sum, with just $9.3 million allocated for the prevention of violence against disabled women.

The ACOSS Post-Budget Gender Analysis on the Budget’s impact on women’s economic security found that those on low incomes, including single parents and older women, were being left behind.

“To help women on low incomes, we needed to see social security payments brought above the poverty line; employment services that deal with gender and age discrimination; and investment in affordable housing,” Goldie said.

“Instead, $30 billion a year is being spent on income and business tax cuts, which will further entrench gender inequality and endanger future funding for services that women rely on.”

Most people accessing income support are women, who comprised the majority (56 per cent) of people who lost $50 a week on 1 April when the Coronavirus Supplement for income support payments was abolished.

ACOSS said before COVID older women were the fastest growing group of people on unemployment benefits, and nearly all single parents receiving parent payments are women.

Goldie said the 2021-22 Budget, like previous Budgets, locked in gender inequality because tax, employment and superannuation systems were “stacked in favour of men”.

“At the same time the Budget does nothing to specifically support single mothers on low incomes or older women struggling to find paid work and facing homelessness.”

ACOSS slammed as “cruel” the $671 million cut to income support for migrant residents and the extension of waiting periods to four years before new permanent migrants can access most welfare payments. These delays would affect family and carers’ payments, with the impact likely to disproportionately affect migrant women.

The NFAW analysis, Gender Lens on the Budget, said the Women’s Budget Statement was “still at heart a glossy” document that failed to systematically examine mainstream Budget initiatives to determine if they had a gendered outcome.

Despite significant outlays in the care sector – particularly in aged care – the Women’s Economic Security Statement appeared to operate on the conviction that “the best that can be done for women in the workforce” was to move them out of female-dominated jobs into male-dominated and non-traditional work.

“Given about 80 per cent of Australians work in services (and 90 per cent of working women), this is not really a viable strategy,” the NFAW analysis said.

Work in the female-dominated care economy was underpaid, insecure and not supported by sufficient investment in workforce development initiatives, ACOSS said.

“While there was renewed interest in the important role the frontline care sector played during the COVID crisis, these jobs remain among the lowest paid in the labour market,” the ACOSS analysis found.

The Budget included new funding for the aged care workforce but the measures would not go far enough to improve employment conditions and pay in the care sector.

The Budget was a mixed bag for older women, with a net positive impact in some policy and service areas, especially aged care, but no improvement in housing and mature age employment, the NFAW analysis found.

Older women – and men – will benefit from the $17.7 billion allocated to respond to some of the findings of the Royal Commission into Aged Care Quality and Safety, including an increase of 80,000 home care packages, expanded safety measures, and funding targeted at making aged care inclusive of diversity groups.

“Overall, however, once again the 2021 Budget is a missed opportunity to improve the lives of older women who face the greatest difficulties: single, older renters totally reliant on JobSeeker or pension payments; those who are homeless; those experiencing elder abuse in the family or community; and those locked out of employment,” NFAW said.

An estimated 450,000 women over 45 are at risk of homelessness in Australia, and women receiving income support generally have insufficient income to cover housing costs, according to ACOSS.

The cost of child care

The Budget provided an extra $1.7 billion to increase the Child Care Subsidy to up to 95 per cent for families with two or more children aged five and under, and to remove the annual cap. ACOSS welcomed this initiative, which applies from July 2022, to improve women’s workforce participation.

“However, the Child Care Subsidy measure does not meet the needs of most single parent households, and will not help First Nations’ community childcare centre funding gaps,” the ACOSS analysis said.

“There is a need to improve conditions and pay in the child care workforce, and chronic understaffing of child care centres.”

Women and girls with disability

The Government for the first time announced in the Budget it would fund a new National Women’s Alliance specifically for women with disabilities.

However, NFAW said structural reforms had not been addressed, such as the need to address the large gap in National Disability Insurance Scheme (NDIS) participation rates between women and girls (37 per cent) and men and boys (73 per cent).

No funding had been allocated to the National Disability Strategy, particularly to improving the status of disabled women and girls, and there was no clear strategy to transition away from systems that segregate people with disabilities in employment and education.

“Priority should be given to developing an NDIS Gender Strategy, in consultation with women with disability and their representative organisations,” the NFAW analysis said.

An additional $351.6 million was committed in the Budget to implement initiatives of the 2020-30 Women’s Health Strategy across maternal, sexual and reproductive health, ageing, chronic conditions, preventative health and mental health.

The 2021-22 Budget also represented the Government’s first response to the Productivity Commission’s 2020 Inquiry into Mental Health with a $2.3 billion package over four years that “fell well short of full implementation of the Commission’s recommendations”, NFAW said.

“More investment will be required to significantly reduce the high burden of disease caused by poor mental health, including in many of the social determinants of poor mental health such as poor social housing and inadequate levels of income support,” NFAW said.

“The Budget also includes a number of initiatives to meet the Closing the Gap targets, however we note the overall spending on Aboriginal and Torres Strait Islander health is set to decline in the 2021-22 Budget.”

See our archive of stories on women’s health.

PrevPreviousCarceral feminism and coercive control: when Indigenous women aren’t seen as ideal victims, witnesses or women
NextOn Sorry Day, how many Aboriginal and Torres Strait Islander children are behind bars?Next