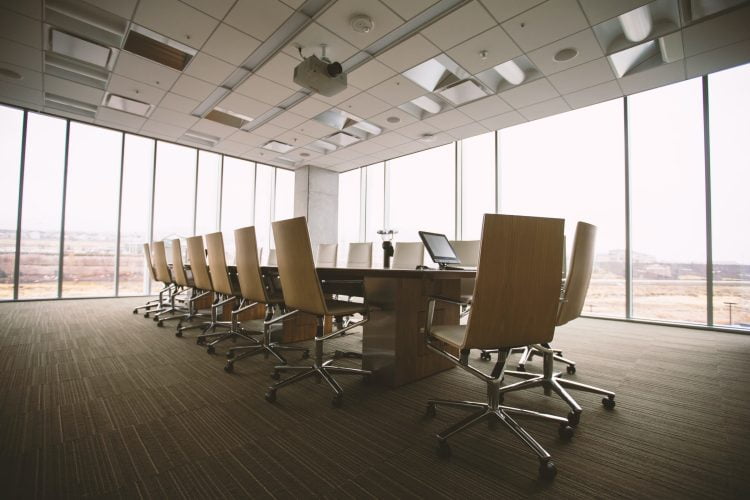 Introduction by Croakey: At a time when universities are under increasing financial pressure and the Omicron strain of COVID-19 cast doubts over the return of international students, concerns are being raised over the growing influence of business models being imposed across campuses.

In an article first published in The Conversation, Dr Alessandro Pelizzon, a Senior Lecturer in the School of Law and Justice at Southern Cross University, and 11 colleagues from universities across the country argue a move to corporate governance is undermining Australian universities.

To say Australian universities are in crisis is to state the obvious. A common narrative suggests the most immediate cause of the current crisis is “reduced international student revenue and income from investments, such as dividends” during the pandemic. Some correlation is undeniable. However, many commentators have noted that the problems besetting our universities transcend financial issues alone and predate the pandemic.

The root causes, we suggest, lie in radical changes in how Australian universities are governed. The shift toward a quasi-corporate model of governance included a significant change in the composition of universities’ governing bodies.

In the past, a majority of their members had a background in the tertiary education sector. Today barely a third do, our research for Academics for Public Universities has found.

COVID brought crises to a head

A recent report by The Australia Institute calculated more than 40,000 university jobs were lost in the year to May 2021. That equates to 20 percent of the total pre-pandemic university workforce, a rate two to three times greater than overall pandemic job losses in Australia. The number also exceeds the jobs that would be lost in total if all thermal coal mining in Australia were to end.

The casualisation of the academic workforce has also reached staggering proportions. The related issues of wage theft and staff bullying have regularly made the news. 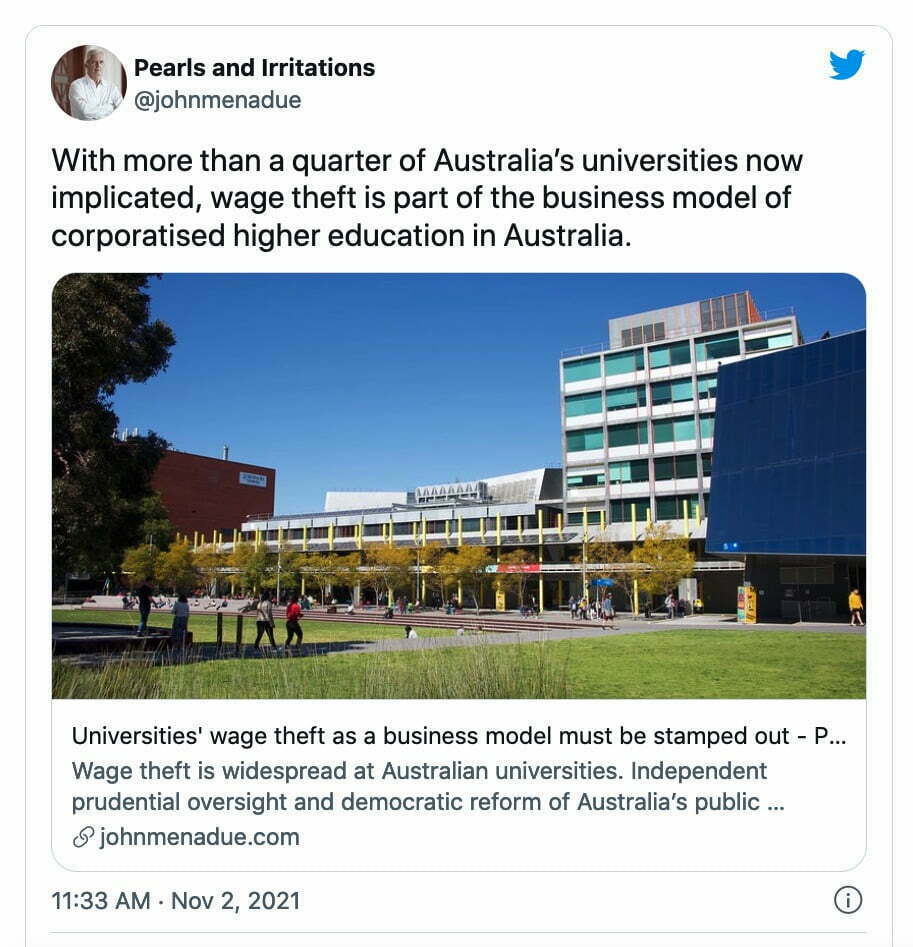 Courses are being increasingly cut. At the same time the costs to students of certain degrees are increasing.

Even before COVID, students were increasingly being diverted to “self-directed” online modules. This trend reduces direct contact time with lecturers and tutors. It’s a source of the very clear student dissatisfaction and distress reported by the Tertiary Education Quality and Standards Agency.

There are also concerns about the decline of academic freedom. These led to the French review recommendation of a model code for universities. A relevant concern here relates to dissenting academic members of universities’ governing bodies.

Who has presided over this growing list of problems and predicaments?

Who governs our public universities?

At present, bodies commonly named councils (or senates in fewer cases, with one called a board of trustees) govern Australian public universities. Decision-making power ultimately rests with them.

As a result of a series of changes over the past few decades, these governing bodies are no longer comprised of a majority of academics and students. Instead, they have a majority of external members who are neither enrolled as students nor employed by the university. The governing bodies themselves elect many of these members.

Academics for Public Universities reviewed the composition and expertise (as advertised on university websites) of the governing bodies of all 37 Australian public universities. Of a total of 564 members, only 33 percent are elected from within the institutions they govern. 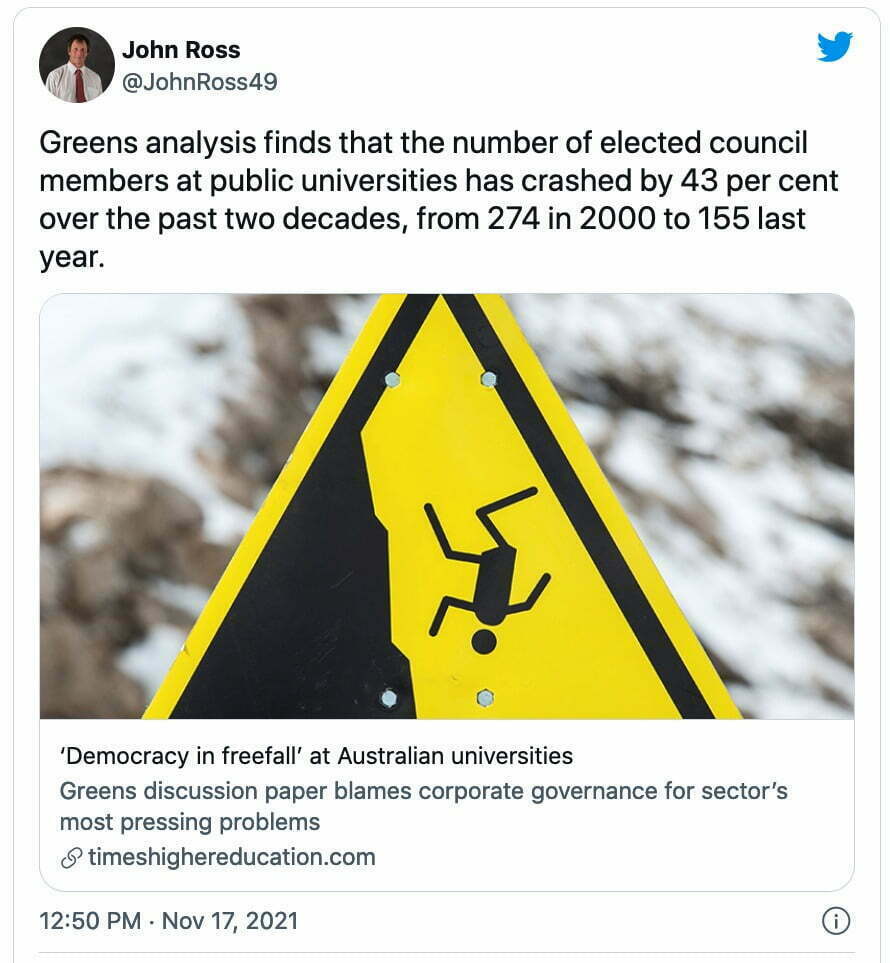 Moreover, only 31.5 percent have any expertise working in the tertiary sector, while 7.5 percent are student representatives. The other 61 percent have professional expertise in fields other than tertiary education. And percent come from the broader corporate/private/finance/industry sector.

As a result, individual members of universities’ governing bodies inject a great level of belief, dedication and financial and commercial skills, but, by definition, limited professional expertise in tertiary education.

It’s not even proper corporate governance

Ironically, this is a radical departure from corporate governance standards. Our review looked at large registered companies, such as Rio Tinto, Telstra and CSL, whose directors often sit on university councils. Their boards have 73 percent, 72 percent and 78 percent respectively of members with experience in the sectors they operate in.

Australian university governance also represents an anomaly internationally. A majority of academics and student representatives still govern most European universities, according to their charters.

For example, at Oxford, frequently ranked the best university in the world, 77 percent of governing members have experience in the university sector. And 73 percent have an explicit academic background.

University managers often act as if they are running commercial corporations. It is time to acknowledge this is both inaccurate and inappropriate, as the South Australian Ombudsman recently found.

For over two decades now, Australian universities have increasingly been run like businesses by a majority of business-minded experts. The problems laid bare by the COVID-19 crisis seem to point to an abysmal failure of such an approach.

As a recent discussion paper released by Greens Senator Mehreen Faruqi argues: “Research and teaching should be governed by public interest and free intellectual inquiry, not the demands and pursuits of corporations” – or a commercial corporate mindset.

Unless academic expertise and values return to the centre of a university’s governance structure, we fear not only will such an aspiration not be met, but also the sector-wide crisis unleashed by COVID-19 will be just one of many.

PrevPreviousPower to the people: the First Nations Clean Energy Network
NextThis election, vote as if your life depends upon itNext