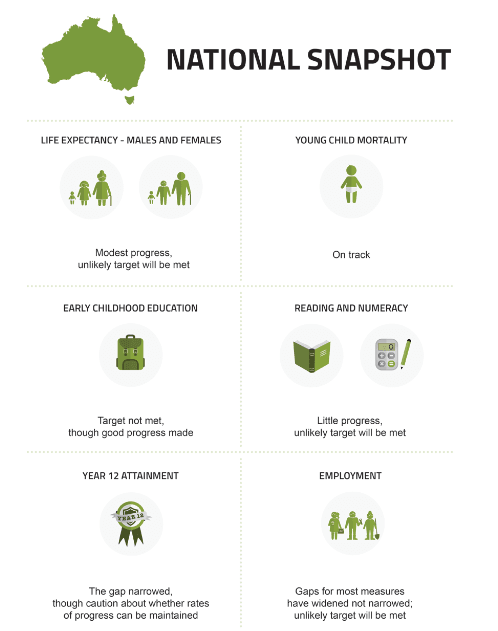 There was some good news this week, with the announcement that the Federal Government will continue to fund the Custody Notification Service, a 24-hour legal advice and phone line for Aboriginal people taken into police custody in NSW and the ACT that was recommended by the Royal Commission. However, the disruption and distress around its initial defunding, and the fact that similar services are still undelivered in other juridictions, underscore the powerful points made by both Davis and Pearson. See some related tweets at the bottom of the post.

A Productivity Commission report has found that the government will probably not meet 5 of the 6 Closing the Gap targets, leaving many astounded to hear that they might actually achieve one of them.

(It should be noted at the outset that the government’s ‘Closing the Gap’ is not the same as ‘Close the Gap’, which is a coalition of Indigenous and non-Indigenous health and community organisations.)

Massive cuts to Indigenous Affairs, the defunding of essential services, a highly criticised funding process in the name of the ‘Indigenous Advancement Strategy’, superficial slogans and punitive approaches, along with a non-Indigenous mining magnate held up as the champion of Indigenous employment were but a few of the signals that things were not going well on the road to closing the gap.

And with all of this going on one could be excused for wondering how anyone ever thought it was going to be any different. It’s a bit like Ned Flanders’ parents in The Simpsons complaining ‘We’ve tried nothing and we’re all out of ideas!’

Except with many of the things that have been tried, ‘nothing’ would probably have been preferable. Even more preferable would have been to listen to, and act upon, what the evidence and the experts say.

The recommendations from the Royal Commission into Aboriginal Deaths in Custody have for the most part never been implemented, and the number of Aboriginal people in custody has steadily risen, as has the rate of deaths in custody.

The recommendations of the National Report into the Separation of Aboriginal & Torres Strait Islander Children from their Families have similarly been ignored and the rate of child removal is now higher than it was at the peak of the Stolen Generations.

These are some of the most commonly known examples, but the list is near endless. Reports are frequently ignored regardless of where they originate, from universities, independent organisations, community members, or even from within the government itself. This is true within all major areas – health, education, employment, incarceration, and housing.

Despite all of this the only Indigenous issues that have been discussed by governments in the past few years have been Constitutional Recognition, meaningless weeklong visits to remote communities, and countless ignorant and racist comments from our former Prime Minister. The only change in this situation has been that Malcolm is a bit more savvy at not saying horrible stuff on record, hardly a fact for celebration.

There have also been more deaths in custody than we like to think about, community closures, defunded services, deregistered sacred sites, and a variety of one-off feel-good moments.

Professor Megan Davis recently wrote, quite brilliantly I might add, about ‘gesture politics’ and this basically sums up government attitudes towards Indigenous Affairs. Except of course for the more extreme rightwing members of the government, emboldened by their counterparts in the media, actually argue that Indigenous peoples receive a kind of ‘special treatment’ that borders on segregation, and that places white Australia as a disadvantaged group by comparison.

These arguments are not helped by the fact that the organisations responsible for implementing Indigenous specific services rarely have the scope or capacity to address the racist misinformation that has arisen since the 1970s when many of these services were first introduced. So much so that is a commonly held belief that Indigenous people get all sorts of ‘free’ stuff from governments. Free houses, cars, education, loans, dog food, funerals, and all sorts of nonsense.

This gross misrepresentation of the nature of, and need for, Indigenous specific programs and services, the demonisation of Aboriginal parents, families and communities en masse, coupled with framing of Indigenous issues as a ‘wicked problem’ has provided an atmosphere that allows and justifies gross breaches of human rights, the dismantling of Indigenous services, and the defunding of Indigenous affairs all while patronisingly claiming it to be ‘in our best interests’.

The three-point slogans of the previous PM (kids must go to school, adults must go to work, and communities need to be safe) translated to little more than truancy officers for some schools, attempts to close remote communities and the championing of Andrew Forrest as the saviour of Indigenous employment, and the defunding of family support services and women’s refuges.

This is why I always get infuriated when someone asks me what they can do to help close the gap, because that question is prefaced on the idea that that is what is actually happening. A better question would be ‘How can I help prevent the government from widening the gap?’

And I wish I knew the answer to that question.

We look for grand gestures like the apology, the bridge walk for reconciliation, or Constitutional Recognition to be cure alls that will somehow magically make all of these other issues disappear. Even former PM Kevin Rudd recently said that ‘Even what some might call symbolic change can usher in a further era of substantive policy change’, completely ignoring that we could just implement an era of policy change if we actually wanted to. It does not require a grand gesture to do that. He also said: ‘Let us for a moment lift up our eyes from the trenches of political battle and gaze for a moment upon the mountains, unleashing our imagination on the new possibilities that might just lie beyond constitutional recognition, towards an Australia that is utterly, wonderfully, magnificently racially blind.’

It is hard to imagine substantive Indigenous rights in a country that is utterly racially blind, and it doesn’t sound particularly wonderful or magnificent either. (I was tempted to tangent here into the problems of the ‘racially blind’/‘I don’t see race’ arguments here but you can google that on your time. I’ve got a point to make, probably.)

Herein lies much of the problem. We wait for grand moments that will ‘usher in an era of change’ like a problem drinker in the middle of February saying they are waiting until next January so they can make sobriety their New Year’s Resolution. Grand claims like these buy time, but after year after year of failing to make good on the promise, people grow weary of them.

That is why so many people have grown tired of claims, of promises, and of gestures. The only thing that is required to usher in these changes is the will to do so. Nothing more.

So even if you support the apology, or reconciliation, or changing the Constitution, or even a treaty, it is important to understand that these gestures are not the societal equivalent of throwing a giant ‘racism is over, we’re good white people now, so please shut up and get over the past already’ party. Racism in all its forms, institutional and personal, well intentioned and malicious; and its impacts, ongoing and intergenerational, will not be something ‘in the past’ that people can have any hope of ‘getting over’ until it stops, and until assurances that it will not start again have been secured. And it won’t stop until we realise that it is not simply a matter of educating people about how bad it is, but a matter of power and profit, and a matter of ending the constant barrage of misinformation that protects it. It is a matter of ensuring that the institutions which were not so long ago purposefully built to ensure the exclusion of Indigenous peoples start to live up to their claims of equality, and are held to account when they fail to do anything less.

As I am known to mention, it is not simply what happened 200 years ago that most people are concerned about, rather it is what has happened every day since, and the heartbreaking knowledge that it will still be happening tomorrow, and the next day, and to the next generation, unless something changes.

I mentioned earlier that I do not have all the answers for what this change looks like but I do think it might be worth trying some of the things that experts from across all areas have been calling for for decades… seems like it might be worth a shot at this stage?

Luke Pearson is a consultant, digital strategist, keynote speaker, social commentator, educator and trainer, and the founder of @IndigenousX – a ground-breaking Twitter account which has a different Aboriginal or Torres Strait Islander person tweeting each week, and which now has its own website. It works in partnership with Guardian Australia: each week, the site presents an online profile and Q&A with the latest host. You can also subscribe to the IndigenousX newsletter. Luke also tweets at @LukeLPearson.