In this second of a series of posts about Medicare, Margaret Faux  looks at how perverse financial incentives, the increased financial pressure applied to pensioners and GPs and the lack of supporting infrastructure make the Federal Government’s $7 GP co-payment proposal a high risk venture.  See her first post here.

The full impact of adding another layer of complexity (co-payments) to Medicare’s already labyrinthine structure is unknown. But one such impact may be that Tony Abbott’s co-payment plan will effectively deregulate the bulk billing market and no one will benefit: not doctors, nor patients, nor the Government.

So for those who can already afford to pay, they will receive $5 less when they claim their Medicare rebate, but here’s the Abbott co-payment plan in operation for everyone else: 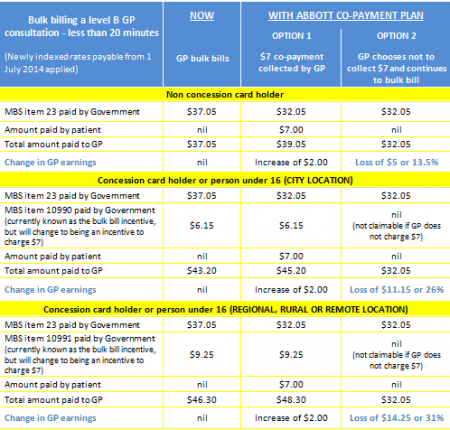 There are no winners here. Patients will either be required to pay, or the GP will have to swallow a pay cut of between 13 and 30 per cent (which would certainly not be tolerated by politicians) and whilst doctors are largely motivated by the Hippocratic Oath rather than financial interests, a 13 per cent pay cut is more than most of us could tolerate.

In addition the current plan contains perverse incentives to collect co-payments from the poorest patients over those who can afford to pay. There are currently two Medicare item numbers known as the ‘bulk bill incentives’ which will become ‘charge children and concession card holder incentives’ because GPs will no longer be able to claim these additional items unless they have collected $7 from the patient.

Last week, the only items in the Medicare Benefits Schedule which were indexed by 2 per cent were the GP services mentioned in the Abbott plan.  Importantly this included standard GP consultations that relate to having a GP visit you in a hospital, which occurs commonly in smaller hospitals. And whilst the Government has indicated a willingness to exempt nursing home residents from co-payments, no mention has as yet been made in regard to inpatient consultations (nursing home residents are classified as ‘outpatients’ for Medicare purposes).

When GPs consult patients in hospital, they are paid differently, claiming via the private health fund schemes. Under these arrangements the doctor claims their fee directly from the health fund; the health fund collects the patient’s Medicare rebate, tops it up to an amount above the Medicare schedule fee and pays the total amount to the doctor, in most cases without the patient ever receiving a bill. The complexity of adding a co-payment into the mix of these schemes cannot be overstated and there is no clarity in the Abbott plan as to how such services will be dealt with, though four options are possible:

But perhaps the greatest cause for concern in the current plan is the fact that the $7 co-payment will be invisible. Short of auditing the books of every doctor in Australia, it will be almost impossible for the Government to know what amount GPs are charging their patients.

Because by allowing GPs to bulk bill and charge a co-payment (currently illegal) the Government is giving tacit approval to bulk billing and charging any gap for any patient seen by any doctor anywhere.

How will Medicare know if a GP who claims item 23 and item 10990 really did collect $7 from the patient?  And patients will be none the wiser because most Australians find medical bills confusing already and rely on doctors to guide them as to how the system works.

A 2003 Government commissioned study relating to a similarly blunt barrier imposed on doctors when prescribing restricted medications found that doctors place greater emphasis on the doctor patient relationship and clinical needs, than on crude methods of cost containment forced upon them.

GPs are therefore unlikely to start charging co-payments to patients they currently bulk bill, but will also not want to deter other patients by increasing fees too much. As doctors become increasingly uncomfortable with this struggle, one solution will be to bulk bill everyone and to charge additional fees (of any amount) to those who can afford to pay. It will ease the financial burden and many doctors will mistakenly assume that the $7 was always a minimum amount (a misunderstanding that has already been demonstrated by one journalist).

What follows will be meaningless Medicare statistics showing bulk billing rates on the rise, when the truth will be that the bulk billing market has effectively been deregulated and a new way of operating will be in operation where fee paying patients pay say, $30 cash on the day, and the remainder is bulk billed to Medicare.

If there was a solid track record demonstrating the Government’s ability to effectively audit the Medicare scheme, there might be reason to think that at least co-payments will be well policed, even though the co-payment idea might be otherwise repugnant. But unfortunately this is not the case. A recent report assessing the effectiveness of Medicare’s management of compliance audits found a $128.3 million shortfall in anticipated savings and identified numerous failures in the way Medicare had conducted its audit activity including: incorrectly recording compliant claims as non-compliant (due to its own internal data entry errors) and being unable to consistently measure debt accurately.

Medicare co-payments have been promoted as a way of preserving the health of our nation. But the perverse financial incentives, the increased financial pressure applied to pensioners and GPs and the lack of supporting infrastructure make it a high risk venture. Its successful execution will be based on meticulous planning, pinpoint accuracy of risks, a deep understanding of the service transaction experience and an ironclad infrastructure. We have none of these for our universal health care system – simply an incautious plan.

Margaret Faux is a lawyer, the founder and managing director of one of the largest medical billing companies in Australia and a registered nurse. She has been involved in Medicare claiming for 30 years and is a research scholar at the University of Technology Sydney examining the interface between Medicare and medical practitioners.