Home Healthcare and health reform chronic diseases GPs are getting older and working more intensively. And what about their patients?

GPs are getting older and working more intensively. And what about their patients?

Two new reports help to give us a picture of what goes on in general practice. Dr Helena Britt, Director of the  Family Medicine Research Centre at the University of Sydney, provides an overview of their findings below.

We (the Family Medicine Research Centre) have just released two reports from the thirteenth year of the BEACH program — General practice activity in Australia 2010-11 and A decade of general practice 2001-02 to 2010-11.

Results come from the hard work of about 1,000 GPs each year recording details for about 100,000 patient encounters. We are one of very few countries to have regular reliable data about what they do.

In 2010-11 there were about 118 million consultations with GPs claimed through Medicare and more from the Department of Veterans’ Affairs. About 83% of us visited a GP at least once—on average each Australian saw a GP 5.3 times. Those that did visit had an average 6.3 visits at a cost to Medicare of more than $5 billion. 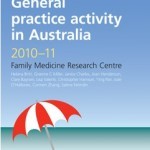 BEACH gives us some insight into general practice. Firstly, did you know that 41% of practising recognised GPs in Australia are now aged 55 years or more? Lucky we are training more MB BS’s and the Government has increased the number of training places for GP Registrars isn’t it?

But this is already straining the available training places, and the effect of those extra Registrars on the trained workforce is going to take a while, so hopefully these older GPs will hang in there for a while yet.

Did you know that the average GP consultation lasts 15 minutes and hasn’t changed over the decade? There’s more variety than there used to be though— more short consultations, and more claims for chronic disease items numbers, mental health items and health assessments etc.

We think the increase in short consultations is related to the introduction of practice nurses, who are involved in the care provided at about 8% of all consultations, mostly doing immunisations and wound treatment. It will be interesting to measure the effect on GP activity, of the change in funding of practice nurses away from claimable Medicare items to block grants for employment of nurses in practices, in January next year.

GPs are managing more problems on average at a patient visit—they now manage 153 problems per 100 encounters, up from 143 per 100. That mightn’t sound much, but it does mean that nationally, GPs managed about 37 million more problems in 2010-11 than ten years earlier. Of course there are more GPs than there were ten years ago, to deal with the increasing population and help absorb the extra number of problems needing management.

Perhaps the ongoing management of chronic problems becomes more routine, until the next health event emerges. However, we know from earlier BEACH publications that among general practice patients there’s a high prevalence of multi-morbidity, involving multiple body systems. This must add to the complexity of the consultations with many older patients.

There’s miles more in the reports, but too much to talk about here—changes in management rates of problems such as diabetes, depression, URTI etc, prescribing, counselling and advice, therapeutic procedures, referrals, tests and investigations—have a look.

Go to our home page, and click on the publications, to link to PDFs available for free download from Sydney University Press.