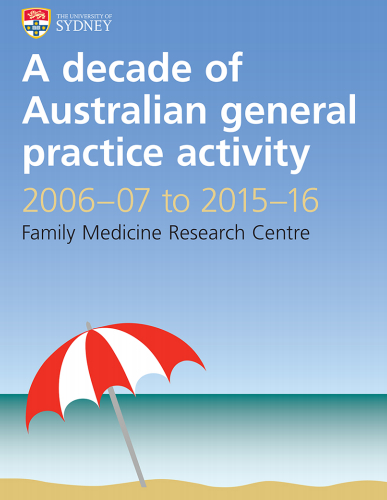 Despite the Medicare indexation freeze Australia’s General Practitioners are working harder than ever, with the population ageing and chronic conditions on the rise, particularly among the middle-aged, according to the latest update from Sydney University’s BEACH study.

BEACH, a landmark longitudinal research program into primary care in Australia, was shuttered this year due to funding cuts after 18 years of continuous data collection and Thursday’s reports will be the last.

According to the latest BEACH data, the burden on GPs has increased significantly compared to a decade ago, with practitioners now managing 154 problems per 100 patient encounters (149/100 in 2006-07), or 67 million more in total in 2015-16 compared the same period 10 years ago.

To date, the Health Care Homes discussion has focused on those aged 65+ with complex chronic conditions but lead investigator Professor Helena Britt said the research suggested this may be too narrow in scope.

“The reports indicate that the 1.2 million middle-aged Australians aged 45 to 64 who have three or more chronic conditions could benefit from the government’s proposed ‘Health Care Home’ environment,” said Britt.

In fact, middle-aged Australians (3.54m) outstripped the older cohort (3.24m) when it came to having one or more diagnosed chronic conditions, with the most common combination hypertension (1 in 10 middle-aged patients) and hyperlipidaemia (1 in 15 middle-aged patients), and osteoarthritis rounding out the triad.

Middle-aged Australians were also found to have many more tests, referrals, medications and GP encounters than the population average. 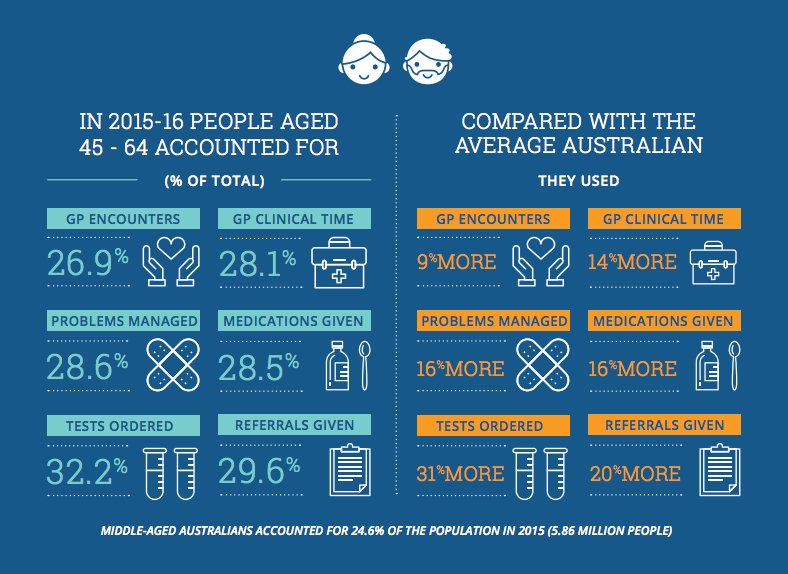 High-risk behaviours and lifestyle factors were also a significant problem in the 45-64 age group, with rates of daily smoking and hazardous alcohol consumption static despite falling in the broader adult population.

“Around one in five middle-aged people aged 45-64 remain daily smokers and one in four drink alcohol at hazardous levels,” said Britt.

“We need more research to understand why clinical and public health programs haven’t affected their lifestyle choices,” she added.

“Perhaps enrolment in health care homes and some targeted lifestyle programs could assist 45–64 year olds in the management of their chronic disease load.” 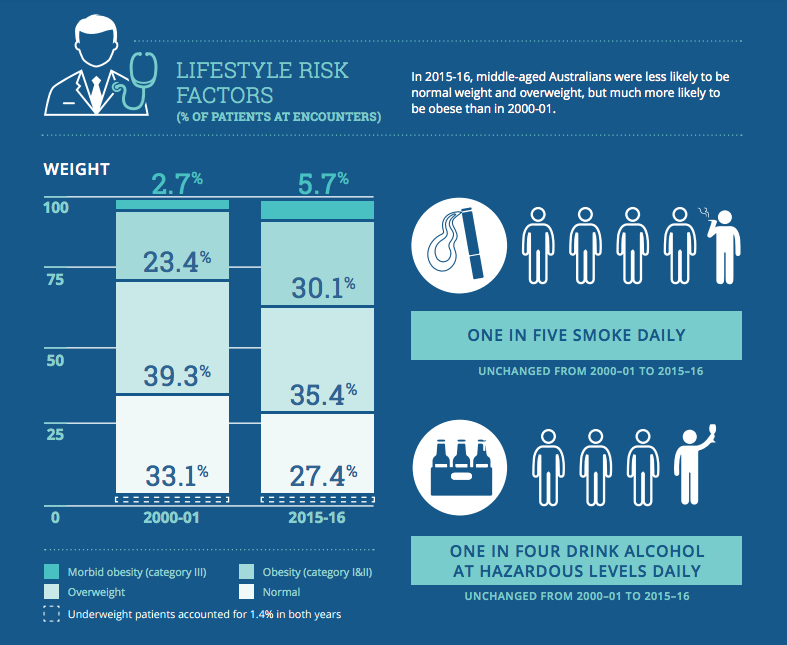 A decade of data

Across a decade of data and almost one million patient-GP encounters, the latest BEACH report presents an unparalleled picture of the changing face of primary care in Australia between 2006 and 2015.

The population is older (33% increase in those aged 65+ to 3.6 million) and accessing General Practice more frequently (87% of people having at least one consult in the year, an increase from 83% a decade earlier).

The average number of GP visits per capita rose from 5 to 6, and went from 6 to 7 for those who visited at least once, while average patient care hours fell slightly from 38 to 37 hours per week and only 28% of GPs (40% 10 years ago) now working more than 40 hours a week.

Underscoring the cost challenges of Medicare, the number of Medicare-claimed GP consult items has expanded by 38% across the decade to 143 million in 2015-16.

The GP workforce itself is shifting, with more females, more doctors aged 55+ (both at 45%) and a greater proportion of overseas-trained GPs (39%, up from 26% a decade ago).

Practices are also bigger than they used to be, with 29% now boasting 10 or more GPs (double a decade ago) and only 24% of practices home to 2-4 GPs.

There’s lots more to digest in the report and the separate 2015-16 snapshot including encounters and billing data so we’d encourage you to check them out.

Farewell, and thankyou to the BEACH program for all your years of hard work. You will be missed.

PrevPreviousWant to improve the nation’s health? Start by reducing inequalities and improving living conditions
Next‘One thing leads to another’: lessons from MarmotNext