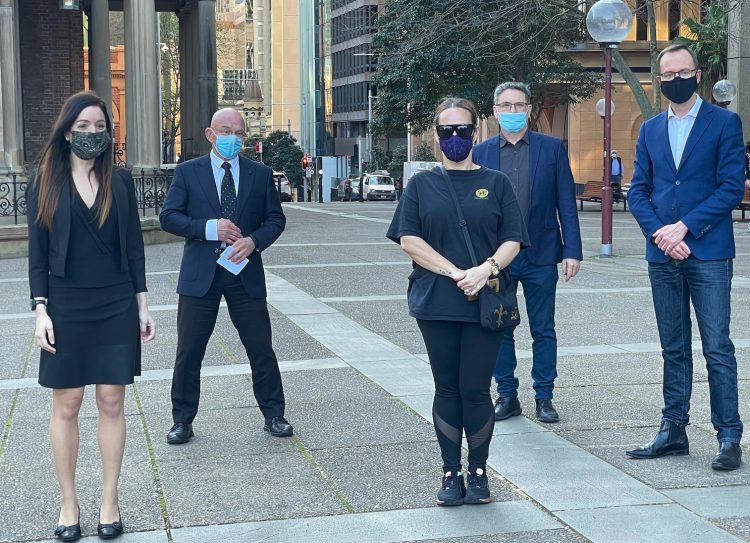 Introduction by Croakey: Aboriginal and Torres Strait Islander and other justice advocates have been sounding the alarm since early last year about the risks of COVID-19 in prisons, calling for the early release of non-violent offenders who are particularly at risk, and other safeguards.

Yet, despite global recognition of people in prisons as a high risk group and growing numbers of COVID cases in New South Wales prisons, prison vaccination rates in publicly run prisons in NSW are woefully low.

People in prisons are facing a death sentence because of catastrophic failures to protect them from COVID-19, advocates said today.

The warning comes as new data shows that vaccination rates in publicly run prisons in NSW are currently far below those of the general population, making prisoners yet another priority group whose high risks have been overlooked by Federal and State Governments in the COVID-19 pandemic.

According to NSW Health, 105 cases of COVID-19 (27 with unknown source) were recorded across correctional facilities over the past four weeks — by far the largest outbreak in a prison population in Australia since the pandemic began.

Justice advocates say the current vaccination rates among prisoners are “alarmingly low”, particularly given the worrying outbreaks including at remand facilities where there is high movement to and from the community.

That raises significant risks not only for prisoners and prison staff, but also to communities outside, with many prisons located in regional and rural communities with high Aboriginal and Torres Strait Islander populations.

In its first clear statement on vaccination rates, the NSW Justice Health and Forensic Mental Health Network — which refers to prisoners as patients — told Croakey that 21 percent of prisoners in its care are fully vaccinated and that 42 percent have had one vaccine dose (as at 27 August).

The public prison vaccination number compares to the latest figures which show (as at August 31) New South Wales total vaccinations at 37.1 percent fully vaccinated and first doses at 68.2 percent.

But the numbers come with several caveats, including that the Network rates account only for prisoners in publicly owned and managed facilities, and not the privately run facilities at Parklea, Junee or Grafton.

The Network also clarified later that the official count won’t include prisoners or people on remand who may have had a vaccine dose in prison but exited later, though it could not say how many people that may involve.

The Network says it has been vaccinating staff and patients since March 2021 “in line with Commonwealth and NSW public health advice”.

It belatedly acknowledges the growing risk in NSW prisons, saying that, “to protect our staff and patients, we are ramping up our vaccination program over the coming weeks”.

Justice advocates have been long calling for a stronger rollout of vaccines in prisons across the country, and for more transparency on cases, vaccination rates and strategies.

On 1 September, advocates held a news conference in Sydney to express “grave fears that the current outbreaks in NSW prisons will be a death sentence for people serving prison sentences and on remand”.

“The New South Wales Government is failing to address the urgent need and impending crisis and catastrophe in prisons,” Thalia Anthony, Professor of Law at the University of Technology Sydney told media.

She said advocates were putting authorities on notice.

“We don’t want to be standing here when there is a death in custody, we have to act urgently.”

She called for a rapid rollout of vaccinations, reduction in the number of prisoners, and other measures.

Prisoners are a vulnerable at-risk community, their vaccination rates should be ahead of the general population, not behind.

Urgent steps need to be taken to ensure prisoners in NSW have access to the state’s vaccine rollout.” 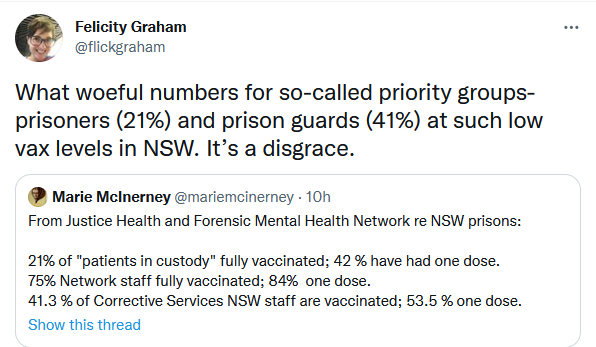 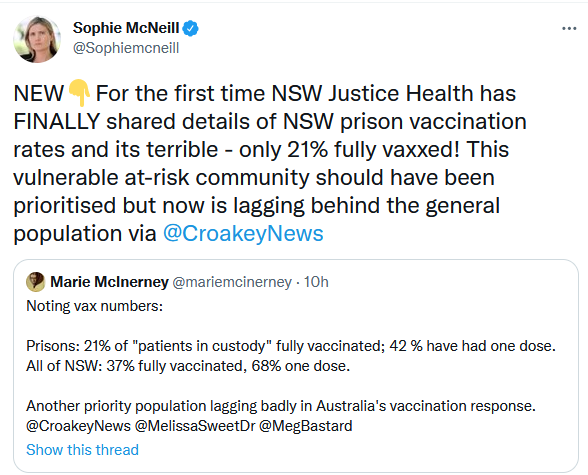 The Deadly Connections Aboriginal community justice organisation, which featured in the Incarceration Nation documentary broadcast on NITV on Sunday, has raised the alarm about the risk of Aboriginal deaths in custody.

It is among a group of advocates, including Professors Anthony, Chris Cunneen and Jocelyn Jones, calling for urgent safe release of prisoners, particularly Aboriginal and Torres Strait Islander people, and no new admissions to prisons or prison transfers. See their open letter and full list of demands here.

The letter says there can be “no COVID safety in over-crowded prisons where people are detained in large numbers”.

One of the signatories, Steven Caruana, coordinator of the Australia OPCAT Network, quoted warnings over the past two years that “the scenario of a rapidly increasing transmission of COVID-19 within prison systems will have an amplifying effect on the epidemic within the general public”.

“It is therefore important to remember that the health of the general community is intricately tied to the health of our detained population and given their vulnerability we must make a substantial efforts to protect them,” he said.

Advocates are also concerned with the ongoing use of isolation as a COVID-19 management strategy, isolating prisoners in their cells and keeping loved ones and key supports away from prisoners rather than the calls they have been making.

On 1 September, Corrective Services NSW confirmed the approach in an update to advocates of its current response to COVID-19, after it introduced a lockdown across the state.

It said it was isolating any prisoner with cold/flu like symptoms, or has had close contact with a person diagnosed with or suspected of being exposed to COVID-19, was limiting the movement of inmates across and between correctional centres and had suspended in-person social visits and external leave programs for inmates.

Leading Australian criminologist Professor Eileen Baldry told Croakey that prisoners in NSW were now at “very high risk” from the ongoing outbreak, saying authorities had been caught “offguard”, despite constant warnings of the risks and the devastation in some US prisons.

“The experts told us it was coming,” she said, adding that the failure to urgently vaccinate prisoners sits alongside failures in vaccination for aged care, Aboriginal and Torres Strait Islander people and people with disability – all groups declared as priority but not given priority access.

Baldry, who is Deputy Vice-Chancellor Equity Diversity and Inclusion and Professor of Criminology at UNSW, said there are numerous and cascading risks for prisoners from COVID-19.

To start with, they have high rates of Hepatitis B, chronic illness, mental illness, cognitive and other disabilities.

As well, the Delta variant is often infectious before a positive case shows any symptoms and can be tested, which poses a particular risk to prisoners who are “literally captive”, and where prison officers are essential workers going in and out of prisons from their own communities.

They are often on quick rotation, over days, weeks or months, in and out of the corrections system and, with COVID, “may take it in with them, they make take it out”, Baldry said.

NSW has seen the risks illustrated by one particular recent case, a man tested on entry to the Bathurst Correction Centre on 7 August. He did not get his positive result until three days later, after he had been released on bail and returned home to Walgett.

Whether everybody is being tested in time to be released from remand is a critical question, says Baldry, “because the nature of prison is that, particularly from remand, you might be released with a day’s notice, and put on a train to go back to Walgett or Dubbo or Brewarrina or Wilcannia or Blacktown”.

“They should certainly not be putting anyone into remand unless they are the most serious threat to the community and we should be releasing remand prisoners who are (in prison) for the very low levels of offending and be making the prisons safer for those who are still in there,” she said.

Baldry also said prisons should not use extended tough lockdowns and confinement to manage outbreaks inside their walls, saying extended use of isolation is “torture” and should be “unthinkable for long periods of time”.