Credit: Valentin Flauraud/EPA, via The Conversation

Greta Thunberg at Davos: why Gen Z has real power to influence business on climate change

The time for action is now – this is the mantra being taken up by Generation Z across the world. Already this year, thousands of high school students across the world have skipped school to protest their governments’ inaction on climate change. The students were inspired by 16-year-old Swede Greta Thunberg, who started the movement by skipping school every Friday since August 2018. This is only the beginning: further demonstrations are already scheduled for the coming weeks.

Gen Z has the most to lose from the negative effects of climate change, and Thunberg made a compelling call to action at the recent COP24 conference in Katowice, Poland: “You say you love your children above all else – and yet you are stealing their future in front of their very eyes,” she told global leaders during the climate summit. “Until you start focusing on what needs to be done rather than what is politically possible, there is no hope. We cannot solve a crisis without treating it as a crisis,” she added. 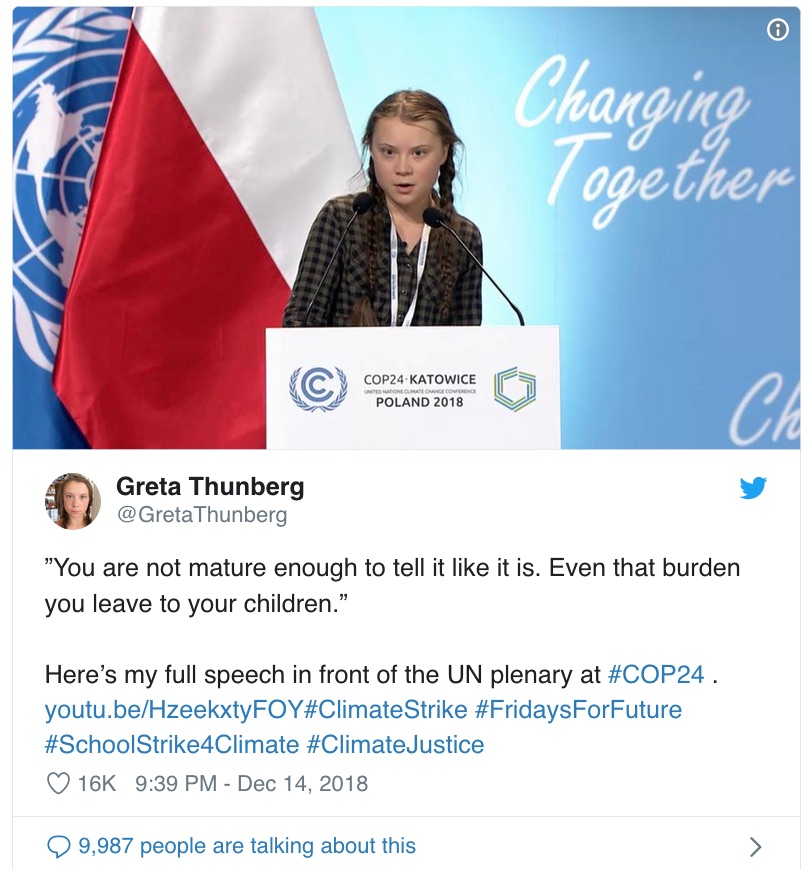 Despite the urgency in Greta’s speech and calls for climate protesters to get more radical, the outcomes of COP24 left much to be desired, in terms of actionable steps to cut emissions. It remains to be seen whether Greta’s call to action will take root and drive meaningful change. But our intuition is that, armed with social media and growing economic clout, Gen Z is best positioned to influence business practices, rather than global climate agreements, where political gridlock appears to be the status quo.

A proud history of activism

A look back at recent social and environmental movements proves that youth activism can shape the current debate around climate change. Approaching the 60th anniversary of the Greensboro sit-ins – where students flouted segregation by occupying seats at diners – it’s timely to recall the instrumental role young people played throughout the American civil rights movement’s most critical moments. Their actions helped to desegregate schools, challenge racism and advance voter and civil rights legislation.

Other notable youth movements over the past 50 years have included the Vietnam War protests, Tiananmen Square and the Arab Spring. While each of these movements is unique to its time and place in history, they share a common element: a clear authority to protest against.

Arguably, young climate activists today face an even tougher challenge than their historical predecessors. Getting political action on climate change is a seemingly impossible task, and youth movements over the past 30 years have been unable to influence global policy in any meaningful way. This is largely because no single government or organisation has the necessary authority to create the kind of change needed to address climate change on a global scale.

While Greta’s message may have fallen on deaf ears at COP24, her appeal to global business leaders at the annual World Economic Forum in Davos, Switzerland, holds more promise. As scholars in social innovation, we are interested in understanding how youth activism can transform the business sector, by aligning sustainable business models with a meaningful purpose and positive impact on the environment.

Companies are already looking for ways to hitch a ride on social and political movements and tap into Gen Z’s purchasing power, reportedly worth US$44 billion globally. And a number of recent campaigns by young activists have already succeeded in making corporations change their ways.

The anti-straw movement, started by nine-year-old Milo Cress in 2011, illustrates how social media can change behaviour at multinational companies such as McDonalds and Starbucks. Likewise, the Facebook page Kids Cut Conflict Palm Oil has – with the help of Australian NGO Wildlife Asia – successfully lobbied PepsiCo to cut ties with an Indonesian palm oil supplier over deforestation and labour concerns.

Recent initiatives to end gun violence in the US have also seen youth activists play a major role. Following the shooting that killed 17 people at a school in Parkland, Florida, students began social media campaigns targeting major companies with ties to the National Rifle Association, forcing them to end those relationships. Dick’s Sporting Goods, a major gun retailer, pulled assault-style rifles from its stores in response.

Companies also want to understand how digital natives use social media to interact with their products and services. From hiring Gen Z advisors to guide digital marketing efforts, to putting Millennials and Gen Z on their board of directors, companies are racing to connect with young people.

Understanding that Gen Z are motivated by social causes, companies are making efforts to genuinely engage with this demographic on social media. For example, Boxed Water has pledged to plant two trees for every picture of their product shared with #betterplanet, and has planted nearly 800,000 trees to date.

The international community has been warned that there is only a 12 year window to keep global temperatures from rising more than 1.5C – the limit to prevent “climate catastrophe”. By that time, Greta Thunberg will be just 28 years old – so it’s no wonder that today’s youth are determined to keep up the pressure.

Tackling climate change is going to need buy-in from corporations, governments and civil society. If today’s young activists can speed up this process, all power to them. After all, as the old proverb goes, we don’t inherit the world from our parents – we borrow it from our children.

• Vanina Farber is the elea Professor for Social Innovation, IMD Business School, an economist and political scientist specialising in social innovation, entrepreneurship and corporate social responsibility, with also almost 20 years of teaching, researching and consultancy experience, working with academic institutions, multinational corporations and international organisations. She is the holder of the elea Chair for Social Innovation.

• Patrick Reichert is the elea Research Fellow in Social Innovation, IMD Business School. He conducts research at the intersection of entrepreneurship, finance and social impact, with a particular focus on the mechanisms and logics that investors use to seed investment in social organisations.

PrevPreviousWhat’s wrong with Labor’s Private Healthcare Discussion Paper?
NextClimate change is the “new tobacco”: what health professionals can do to play their partNext