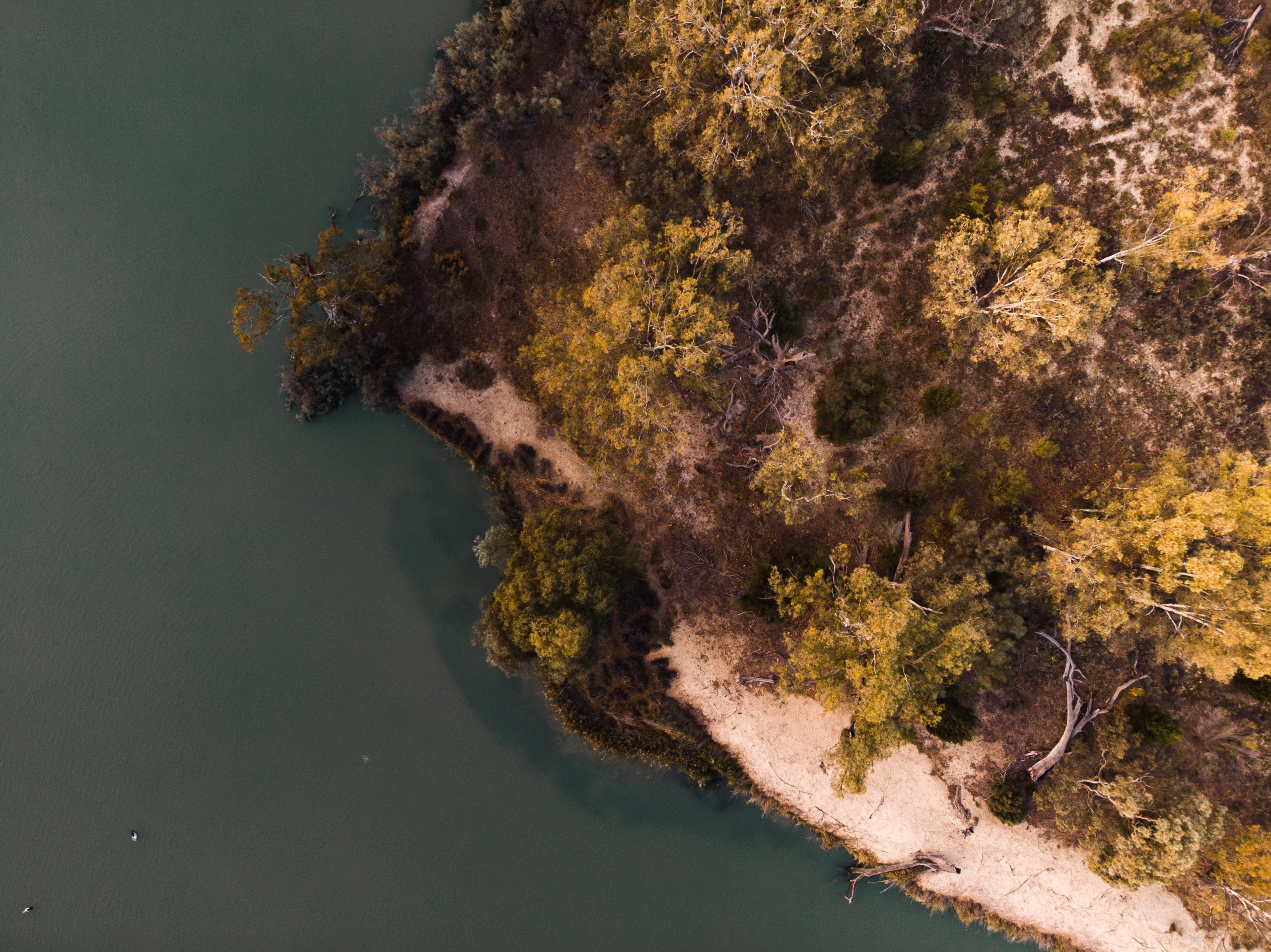 Introduction by Croakey: In her National Press Club address to launch the State of the Environment report this week, Minister for the Environment and Water Tanya Plibersek said “if we continue on the trajectory we are on, the precious places, landscapes, animals and plants that we think of when we think of home, may not be here for our kids and grandkids”.

Placing emphasis on the “lost decade” under the Coalition Government, Plibersek announced the Labor Government’s national goal to protect 30 percent of Australian land and sea by 2030.

It is hard to see how this will come to fruition with proposals for more coalmines in Queensland, and other fossil fuels projects in the wings.

The 2022 State of the Environment Report goes further than previous reports by describing the impact of the environment on the health and wellbeing of Australians and as the first to include Indigenous co-authors, according to the chief authors of the report.

Professor Emma Johnston, Deputy Vice-Chancellor (Research) of University of Sydney, Adjunct Professor Ian Cresswell and Dr Terri Janke, Meriam and Wuthathi woman, Honorary Associate Professor at University of NSW, discuss key findings in the article below, originally published at The Conversation with the heading, ‘This is Australia’s most important report on the environment’s deteriorating health. We present its grim findings’.

Climate change is exacerbating pressures on every Australian ecosystem and Australia now has more foreign plant species than native, according to the highly anticipated State of the Environment Report released this week.

The report also found the number of listed threatened species rose 8 percent since 2016 and more extinctions are expected in the next decades.

The document represents thousands of hours of work over two years by more than 30 experts. It’s a sobering read, but there are some bright spots.

Australia has produced a national state of environment report every five years since 1995. They assess every aspect of Australia’s environment and heritage, covering rivers, oceans, air, ice, land and urban areas. The last report was released in 2017.

This report goes further than its predecessors, by describing how our environment is affecting the health and wellbeing of Australians. It is also the first to include Indigenous co-authors.

As chief authors of the report, we present its key findings here. They include new chapters dedicated to extreme events and Indigenous voices.

There have been continued declines in the amount and condition of our natural capital – native vegetation, soil, wetlands, reefs, rivers and biodiversity. Such resources benefit Australians by providing food, clean water, cultural connections and more.

The number of plant and animal species listed as threatened in June 2021 was 1,918, up from 1,774 in 2016. Gang-gang cockatoos and the Woorrentinta (northern hopping-mouse) are among those recently listed as endangered.

Australia’s coasts are also under threat from, for instance, extreme weather events and land-based invasive species.

Read more: Another mass bleaching event is devastating the Great Barrier Reef. What will it take for coral to survive?

Our nearshore reefs are in overall poor condition due to poor water quality, invasive species and marine heatwaves. Inland water systems, including in the Murray Darling Basin, are under increasing pressure.

Nationally, land clearing remains high. Extensive areas were cleared in Queensland and New South Wales over the last five years. Clearing native vegetation is a major cause of habitat loss and fragmentation, and has been implicated in the national listing of most Australia’s threatened species.

The intensity and frequency of extreme weather events are changing. Over the last five years, extreme events such as floods, droughts, wildfires, storms, and heatwaves have affected every part of Australia.

For example, the downstream effects of the 2019-2020 bushfires introduced a range of contaminants to coastal estuaries, in the first global record of bushfires impacting estuary habitat quality.

This includes traditional fire management, which is being recognised as vital knowledge by land management organisations and government departments.

Work must still be done to empower Indigenous communities and enable Indigenous knowledge systems to improve environmental and social outcomes.

Australia’s investment is not proportional to the grave environmental challenge. The area of land and sea under some form of conservation protection has increased, but the overall level of protection is declining within reserves.

We’re reducing the quantity and quality of native habitat outside protected areas through, for instance, urban expansion on land and over-harvesting in the sea.

The five urban areas with the most significant forest and woodland habitat loss were Brisbane, Gold Coast to Tweed Heads, Townsville, Sunshine Coast and Sydney. Between 2000 and 2017, at least 20,212 hectares were destroyed in these five areas combined, with 12,923 hectares destroyed in Queensland alone.

Australia is also increasingly relying on costly ways to conserve biodiversity. This includes restoration of habitat, reintroducing threatened species, translocation (moving a species from a threatened habitat to a safer one), and ex situ conservation (protecting species in a zoo, botanical garden or by preserving genetic material).

Environmental decline and destruction is harming our wellbeing

In this report we document the direct effects of environmental damage on human health, for example from bushfire smoke.

The indirect benefits of a healthy environment to mental health and wellbeing are harder to quantify. But emerging evidence suggests people who manage their environment according to their values and culture have improved wellbeing, such as for Indigenous rangers and communities.

Previous reports mostly spoke of climate change impacts as happening in future. In this report, we document significant climate harms already evident from the tropics to the poles.

As Australia’s east coast emerges from another “unusual” flood, this report introduces a new chapter dedicated to extreme events. Many have been made more intense, widespread and likely due to climate change.

We document the national impacts of extreme floods, droughts, heatwaves, storms and wildfires over the past five years. And while we’ve reported on immediate impacts – millions of animals killed and habitats burnt, enormous areas of reef bleached, and people’s livelihoods and homes lost – many longer-term effects are still to play out.

An extreme heatwave in 2018, for example, killed some 23,000 spectacled flying foxes. In 2019, the species was uplisted from vulnerable to endangered.

Many Australian ecosystems have evolved to rebound from extreme “natural” events such as bushfires. But the frequency, intensity, and compounding nature of recent events are greater than they’ve experienced throughout their recent evolutionary history.

For example, marine heatwaves caused mass coral bleaching on the Great Barrier Reef in 2016, 2017, 2020 and 2022. Such frequent disturbances leave little time for recovery.

Indeed, ecological theory suggests frequently disturbed ecosystems will shift to a “weedy” state, where only the species that live fast and reproduce quickly will thrive.

This trend will bring profound shifts in ecosystem structure and function. It also means we’ll have to shift how we manage and rely on ecosystems – including how we harvest, hunt and otherwise benefit from them.

Indigenous people of Australia have cared for the lands and seas over countless generations and continue to do so today.

In Australia, a complex web of government laws and agreements relate to Indigenous people and the environment. Overall, they are not adequate to deliver the rights Indigenous people seek: responsibility for and stewardship of their Country including lands and seas, plants and animals, and heritage.

For the first time, this report has a separate Indigenous chapter, informed by Indigenous consultation meetings, which highlights the importance of caring for Country.

Including an Indigenous voice has required us to change the previous approach of reporting on the environment separately from people. Instead, we’ve emphasised how Country is connected to people’s wellbeing, and the interconnectedness of environment and culture.

More than a third of Australia’s eucalypt woodlands have been extensively cleared, and the situation is worse for some other major vegetation groups.

Experts say within 20 years, another seven Australian mammals and ten Australian birds – such as the King Island brown thornbill and the orange-bellied parrot – will be extinct unless management is greatly improved.

Of the 7.7 million hectares of land habitat cleared between 2000 and 2017, 7.1 million hectares (93%) was not referred to the federal government for assessment under the national environment law.

Three critically endangered communities, all in NSW, have no habitat protection at all. These are the Hunter Valley weeping myall woodland, the Elderslie banksia scrub forest, and Warkworth sands woodland.

The report also highlights where investments and the hard work of many Australians made a difference.

By building on achievements such as these, we can encourage new partnerships and innovations, supported with crucial funding and commitment from government and industry.

We also need more collaboration across governments and non-government sectors, underpinned by greater national leadership. This includes listening and co-developing solutions with Indigenous and local communities, building on and learning from Indigenous and Western scientific knowledge.

And we need more effort and resources to measure progress. This includes consistent monitoring and reporting across all states and territories on the pressures, and the health of our natural and cultural assets.

Such efforts are crucial if we’re to reverse declines and forge a stronger, more resilient country.

Read the full 2022 State of the Environment report here.

Professor Emma Johnston, Professor and Deputy Vice-Chancellor (Research), University of Sydney, is contracted by the Department of Climate Change, Energy, the Environment and Water as an independent Chief author of the 2021 Australian State of Environment Report. She is a Director on the board of the Great Barrier Reef Marine Park Authority.

Adjunct professor Ian Cresswell, UNSW Sydney is contracted by the Department of Climate Change, Energy, the Environment and Water as an independent Chief author of the 2021 Australian State of Environment Report, and is a co-author on several chapters. He is affiliated with the Atlas of Living Australia, the Resilient Landscapes Hub of the National Environmental Science Program, the Western Australian Biodiversity Science Institute, the Tasmanian Land Conservancy, and the Western Australian Marine Science Institution.

Partners: University of Sydney and UNSW Sydney provide funding as members of The Conversation AU. 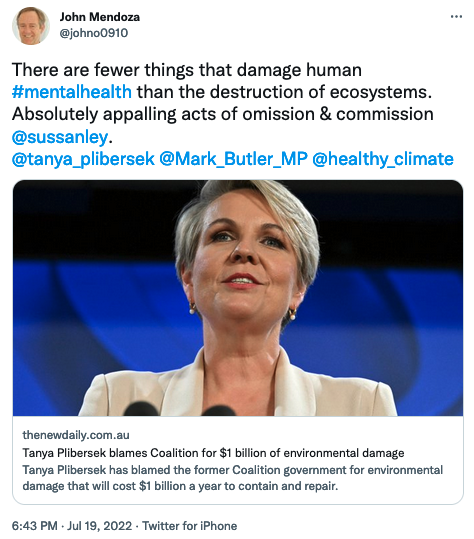 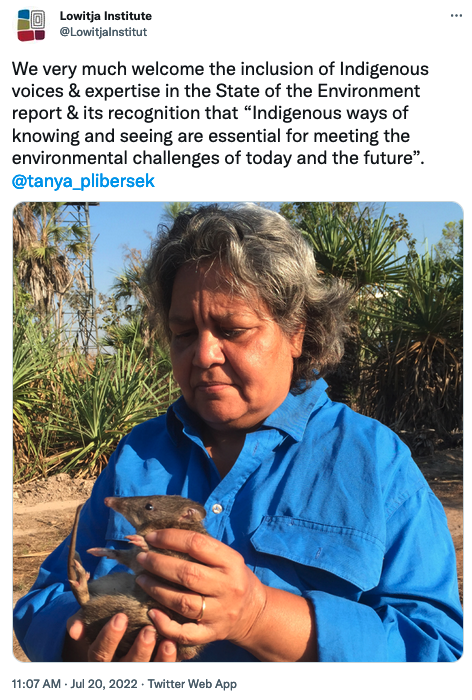 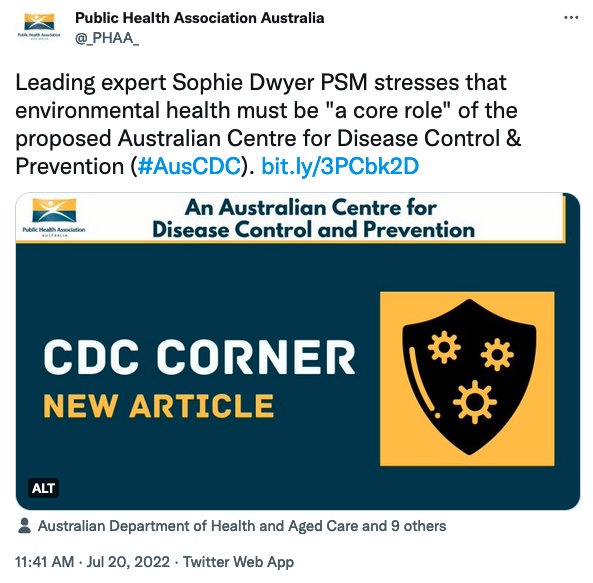 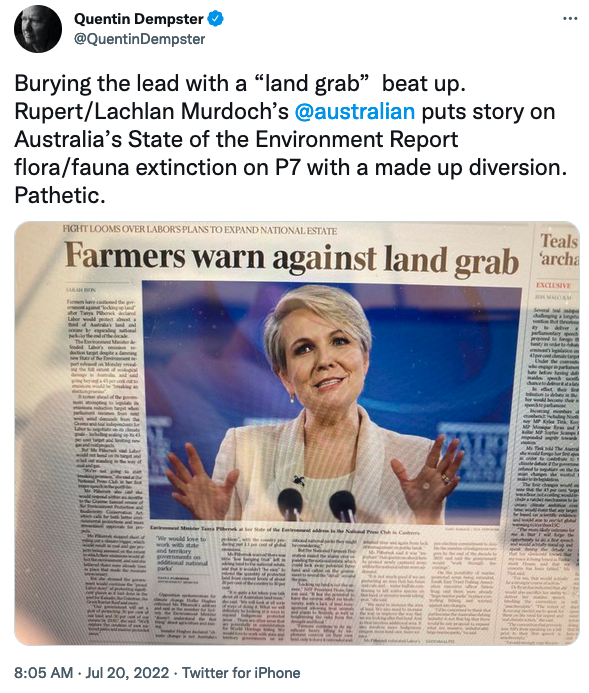 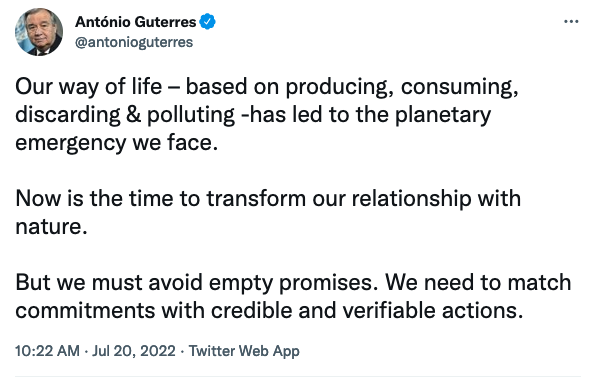 PrevPreviousICYMI: the world’s front pages are on fire and extreme heat is taking a heavy toll on lives, health services and infrastructure
NextGlobal health experts meet again amid concerns about the “rapid and relentless” spread of monkeypox outbreakNext