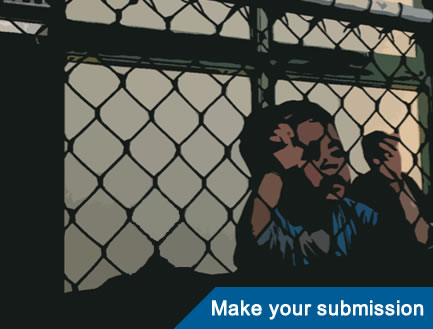 STEVE KILBURN: We couldn’t guarantee the safety of those people, and we still can’t. I sat for a while with a young Somali refugee, young guy. He’d had his head kicked in, his face was smashed, he couldn’t eat, he could hardly drink. And he was scared. And he was all alone [begins to cry]. And we’re supposed to be responsible for him. And I looked at him and thought, what are we doing? This is not justifiable; it’s not. There’s got to be a better way. And you know, I can’t believe that as a you know educated, wealthy, first-world country we can’t come up with a better way than abject cruelty.

Through the revelations of staff members like Steve Kilburn, ABC TV’s Four Corners last night provided a graphic blow-by-blow account of the outbreak of violence at the Manus Island Regional Processing Centre in Papua New Guinea in February, which led to the death of Iranian asylum seeker Reza Barati. See the full program (and transcript).

Violence is not the only manifestation of cruelty, though.

In this post below, Caroline de Costa, Professor of Obstetrics and Gynaecology at James Cook University School of Medicine, reveals the risks to pregnant women, newborn babies and new mothers being held in detention at another of Australia’s offshore processing centres, on Nauru.

De Costa will be presenting her work to the Australian Human Rights Commission’s national inquiry into children in immigration detention, submissions for which close on Friday, 30 May. See its discussion paper.

The grim prospects for pregnant asylum seekers on Nauru

Last week it was reported that dengue fever had broken out in the Nauru immigration processing centre and that two asylum seekers and one site worker had been affected. No pregnant women were affected by this particular outbreak, but dengue is endemic in the islands of the South Pacific, including Nauru and Papua New Guinea. And possible dengue infection would seem to be only one of the risks experienced by the roughly 20 pregnant asylum seekers on Nauru.

The obstetric qualifications and experience of doctors employed by the International Health and Medical Services group in some detention facilities in Australia itself were inadequate when I inspected them in December last year; it seems unlikely that there is an experienced obstetric doctor available to the women on Nauru.

The single (military) doctor remaining from the now-axed Independent Immigration Health Advisory Group and now charged with overseeing healthcare for pregnant women has no obstetric qualifications. Who then is assessing the health of pregnant women currently on Nauru and making decisions about when they should be transferred to Australia for care?

I have not been on Nauru recently, but I worked there in 2003, operating in the Nauru hospital and consulting also in the asylum seeker camp. There was no blood bank on the island then and there is not one now. Nauruans who need blood transfusions must find relatives willing to donate blood on the spot. While most Nauruans have extended families able to do this, asylum seekers do not. Haemorrhage is the most common cause of pregnancy- and childbirth-related death in the world, yet if a pregnant asylum seeker on the island develops this complication the most basic facilities for her care are lacking.

Women are being transferred to Australia late in pregnancy; recently a woman at 31 weeks of pregnancy with premature rupture of the membranes was flown to Brisbane from Nauru — an odyssey likely to have taken at least 15 hours from decision to arrival at the Brisbane hospital.

Once a woman has given birth in Australia she is told that, along with her baby, she will be sent back to Nauru at any time. In the case of Christmas Island this happens when the child is four weeks old (for Nauru the age has yet to be determined, and babies are for the time being remaining in Australia for about five weeks).

Conditions in the Nauru detention camp are hot and overcrowded, with mothers and children accommodated in tents. This is a very unsuitable environment for children, who are generally more susceptible than adults to all sorts of infections, including many serious tropical conditions such as dengue. It is even more unsuitable for newborns. The mortality rate for Nauru for infants under one year is 30 per 1000 live births, more than six times that of Australia (4.66 per 1000, according to UN Population Division figures).

The most overwhelming health threat for pregnant women on Nauru, however, is the sense of hopelessness and helplessness that comes from being detained indefinitely on the 21st-century Australian version of Devil’s Island, thousands of kilometres from any centre where life is being lived normally. In the Darwin detention facilities last December I met many women who were clearly depressed, both before and after giving birth. The chances of women returning to Nauru with new babies developing postnatal depression will be very high — with apparently no care available for them.

The Department of Immigration recently acknowledged the dire situation for women and babies on the island when it arranged the transfer of a woman to Brisbane for an abortion. “I cannot possibly let this baby live on Nauru,” the woman told media. She and her husband confirmed that in any other circumstances they would have welcomed the pregnancy.

In far north Queensland we provide antenatal care for women living in remote regions; we transfer low-risk women for birthing to the main hospital at 36 weeks, and higher-risk women earlier, depending on the situation. But we also have skilled and experienced doctors and midwives working across the region providing direct care and we urgently transfer women at risk to Cairns whenever indicated, often using the help of the Royal Flying Doctor Service.

No community is more than two hours’ flying time away from Cairns, and there are several smaller hospitals in the region whose doctors have obstetric qualifications. There are many skilled providers of care for women with post-natal depression or likely to develop the condition. These are services that have been carefully built up over many years.

Nauru is four times further from Brisbane, the closest place with tertiary-level maternity care, than Thursday Island is from Cairns. There is no RFDS cover; there are no intermediary centres or practitioners to provide care. Nauru is a very hostile environment in which to detain pregnant women and young children.

Australia has a responsibility to provide care for pregnant asylum seekers and their babies equivalent to that provided to women in Australia itself, and to do so transparently and overseen by healthcare professionals with the appropriate skills to do so.

This post was originally published earlier today at Crikey. 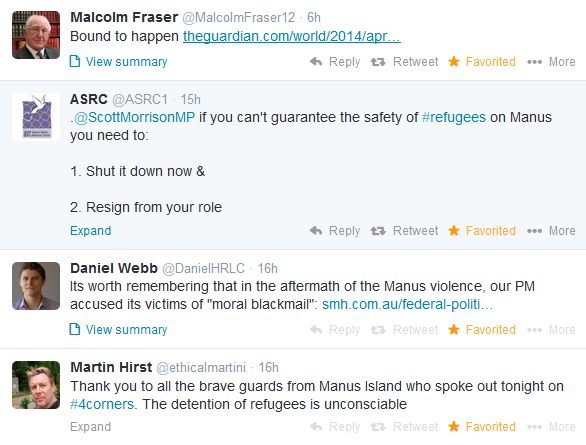 PrevPreviousMedicare Locals: why ‘local’ is the key (and central to Coalition pre-election promises)
NextHow the media shapes Indigenous policy & other insights on policy/comms from #NCO14Next