Many thanks to Melissa Stoneham and the Public Health Advocacy Institute of Western Australia (PHAIWA) for the latest instalment from Journal Watch.

It is a common debate – does sex sell? I would have to say that I am of the opinion that sex does in fact sell in certain circumstances. Let’s take Miley Cyrus. She is young, has a certain level of talent but has used her sexuality to promote her brand – herself! She has taken it upon herself to be assertive about her sexuality. As the Huffington Post suggested – “this is not a girl who has lost the plot. She’s a businesswoman.”

But even when we stick to health issues, sex has still been used to sell. Check out this tobacco advertisement from the 60s. Need I say more? 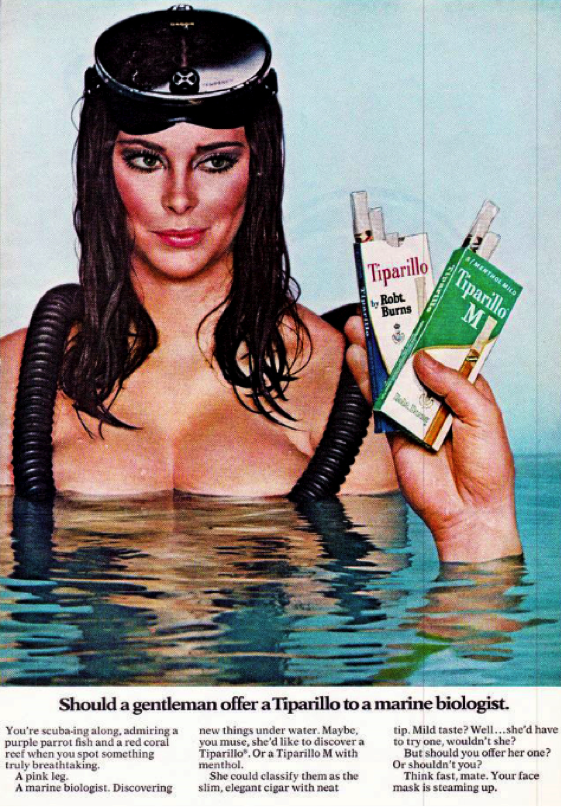 So if you agree that sex does sell, then the article we have chosen to review this month should spark your interest. The article, authored by Dr Jiunn-Yih Su and colleagues from the Centre for Disease Control in NT Health, considered the effectiveness of using Grindr to increase syphilis testing among men who have sex with men in Darwin. Published in the Australian and New Zealand Journal of Public Health, the article looked at whether a social media campaign can enhance the awareness of a suspected syphilis outbreak in the local men who have sex with men (MSM) community and increase syphilis testing. The smartphone application (‘app’) Grindr was chosen as the main social medium for spreading the campaign message because it was the most popular MSM-specific geo-social networking smartphone app that MSM in Darwin use to facilitate sexual partnering. Put simply, Grindr is a hookup app that’s become ubiquitous in the gay community, and one that is well used in the NT. Grindr is a well-known and accepted app. In June 2014, Grindr announced it had four and a half million users (six hundred thousand of them in the U.S.), and that users spent an average of 90 minutes browsing the app every day. To highlight its reach, the Grindr twitter account has 66.9K followers and with an estimated three out of five gay men meeting or engaging their partners online, this app has the potential to reach this particular target group.

Let’s leave Grindr aside, and look at syphilis. Syphilis is a sexually transmitted infection caused by a bacterium called Treponema pallidum. It can affect both men and women. It is not that prevalent in the general population, however is becoming increasingly common among men who have sex with men and in many Indigenous communities. Syphilis is usually transmitted by having unprotected vaginal, anal and oral sex with someone who has the infection. It can also be caught by direct contact with open sores. Additionally, a pregnant woman with syphilis can pass it onto her baby in the womb and it can cause pregnant women to miscarry if left untreated.

Syphilis diagnoses reached their highest level ever in Australia, with 1765 new cases reported in 2013 — a 34 per cent increase since 2009. This increase was reported to be primarily due to rises in infection among men in urban Australia, most of whom were men who have sex with men. The NT News reported in November 2014, that syphilis numbers had increased from 14 to 22 people who have had the disease for two years or less. According to the report, an outbreak in a number of remote Aboriginal communities and another one in the MSM community Darwin accounted for the increase in the infection.

In the article, five new locally acquired cases of syphilis were recorded at a clinic in Darwin between February and July 2013, so a local outbreak of infectious syphilis was suspected. All cases were non-Indigenous MSM and some had multiple anonymous contacts impossible to trace. Due to these circumstances, a social media campaign was considered the best way to control the suspected outbreak. The campaign broadcast across the greater Darwin area and was placed on Grindr for seven consecutive days, and then on the Friday, Saturday and Sunday of the three subsequent weeks. During the campaign period, the broadcast message would pop up when Grindr was opened. A click on the ‘More’ button on the message would launch the smartphone’s web browser and display the ‘Drama Downunder’ webpage, which included a wealth of syphilis information designed by the Australian Federation of AIDS Organisations for MSM.

So did it work? During the 27 days of the campaign broadcast, there was a total of 1897 unique views (equivalent to unique users) and 9812 overall views. The total unique users was a significantly high number as the latest available figure of homosexual and bisexual men in the NT estimated in 2001 was only 647. These statistics also meant that each user was exposed to the campaign message on average 5 times during the campaign period. The authors therefore suggested that it was likely that a high proportion of MSM in Darwin had been exposed to the campaign messages.

Based on these results, it appears that social media platforms such as Grindr, which target specific sub-populations can be an effective means to disseminate health related messages. However there are critics to this type of approach who claim that Grindr and other apps have created a rise in unsafe sexual practices and the use of stigmatising language without the ability to advocate for testing, education and prevention. Even as recently as 27 May this year, UK papers were reporting that dating apps such as Tinder and Grindr were fueling a rise in syphilis, gonorrhoea and HIV.

On the flip side, a breakthrough collaboration between social media sites including Grindr, SCRUFF, BarebackRT, Daddyhunt, Dudesnude, Gay.com, PozPersonals and the San Francisco AIDS Foundation, resulted in efforts to update HIV prevention and education in a way that would better meet the needs of gay and bisexual men, aged 13 to 29 years. At a meeting with public health leaders in San Francisco, representatives from seven of the most prominent gay dating apps met to discuss how to build healthier online communities could assist in the prevention efforts for their users. The social media representatives committed to promoting community health and contributing to the end of HIV transmission through the promotion of information and the use of stigma-free language on their apps.

In a world that is changing as fast as you can Timbuctoo, experimenting and exploring these innovative strategies to increase awareness are needed to address changes in social dynamics and to supplement the more traditional approaches we have used in the past. There will always be a need to have public health programs that include routine testing, needle exchange programs, education about prevention and treatment. However, it is clear from this short article that dating apps can play a role in warning users of the dangers of practicing unsafe sex and the potential need to access a clinic. Practicing safe sex is such a strong message and we cannot become complacent. It is vitally important that the safe sex message stays strong, and that people know how to protect themselves and their partners, and apps appear to be part of the solution.

PrevPreviousFederal health budget review: “There is a failure to realise that health is central to the well-being and wealth of individuals and nations”
NextEvaluating public health interventions: an urban regeneration case studyNext