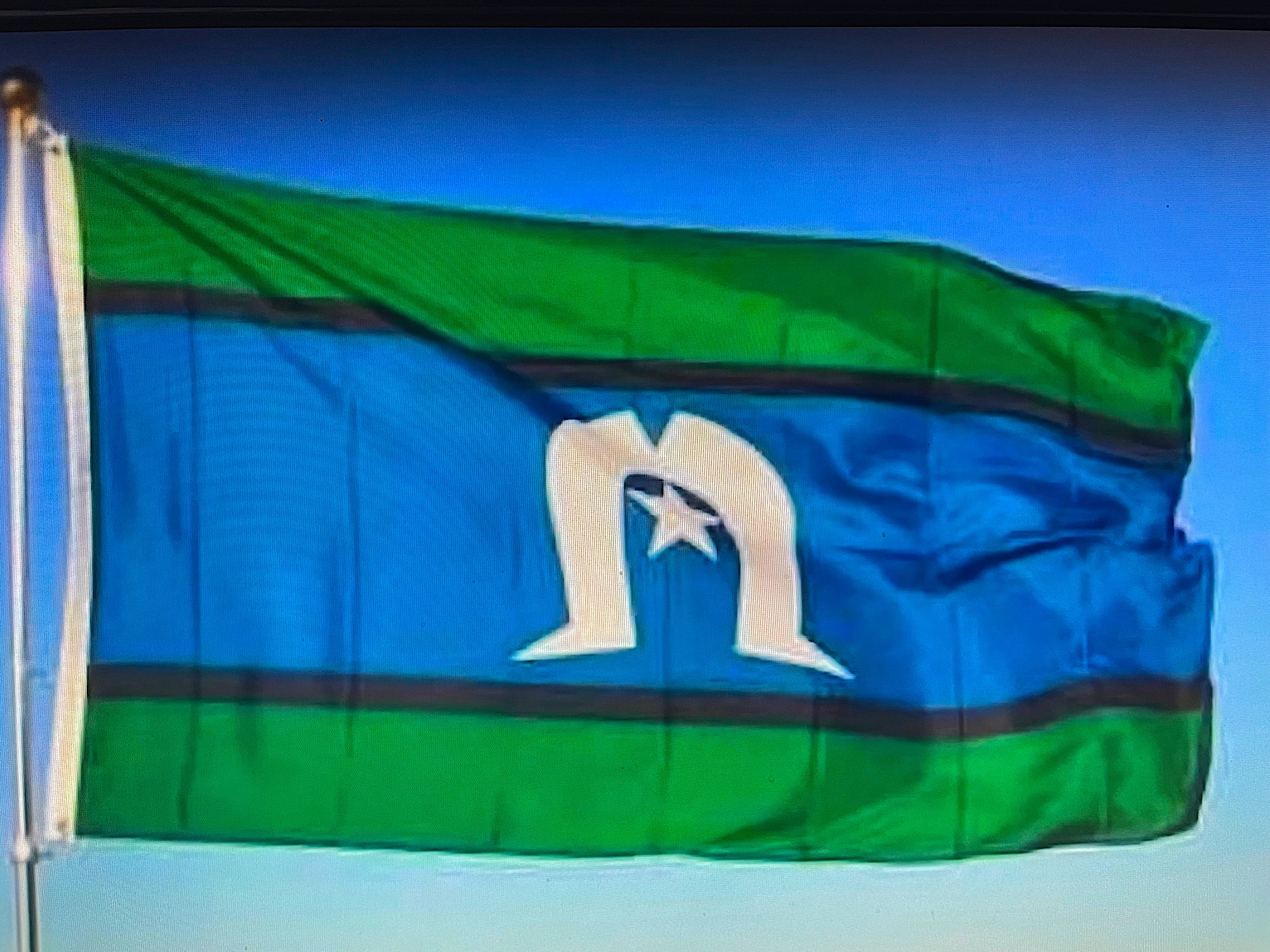 Introduction by Croakey: In a groundbreaking decision last week, a United Nations Human Rights Committee found that Australia has failed to:

protect Indigenous Torres Islanders against climate change impacts, has violated their rights to enjoy their cultures, free from “arbitrary interference” with their private life, family and home.”

The decision sends a clear message that governments must act on climate change and places a duty on the Albanese Government to ensure Indigenous rights are upheld as part of climate policy and planning, according to Professor Kristen Lyons at The University of Queensland.

In the article below, first published in The Conversation under the heading: ‘Australia violated the rights of Torres Strait Islanders by failing to act on climate change, the UN says. Here’s what that means’,  Lyons says the decision will open “up new pathways for Indigenous communities – who are often on the frontline of the climate crisis – to defend their rights.”

To hear more about the win, a webinar will be held with the Torres Strait Group of Eight and their legal team on Thursday 29 September at 6.30pm AEST. More details and registration here.

In a landmark decision, a United Nations committee on Friday found Australia’s former Coalition government violated the human rights of Torres Strait Islanders by failing to adequately respond to the climate crisis.

The Torres Strait Islanders ‘Group of Eight’ claimed Australia failed to take measures such as reducing greenhouse gas emissions and upgrading seawalls on the islands. The UN upheld the complaint and said the claimants should be compensated.

This decision is a breakthrough in Indigenous rights and climate justice, including by opening up new pathways for Indigenous communities – who are often on the frontline of the climate crisis – to defend their rights.

The Albanese Government, which has stated its commitment to work with the Torres Strait on climate change, must now meet this moment of possibility and challenge.

Eight Torres Strait Islanders and six of their children lodged the complaint with the UN in 2019, saying climate change was damaging their way of life, culture and livelihoods.

It was the first time people from a low-lying island exposed to rising sea levels had taken action against a government.

The Torres Strait Islanders hailed from four islands – Boigu, Poruma, Warraber and Masig. In their complaint, they described how heavy rain and storms associated with climate change had devastated their homes and food crops. Rising seas had also flooded family grave sites.

The evidence was backed by findings from the latest Intergovernmental Panel on Climate Change report, which called for urgent action to protect the vulnerable region.

Significantly, deep Indigenous cultural and ecological knowledge, rather than Western climate science, proved key to this UN decision. This marks a departure from broad international climate politics where Indigenous laws, cultures, knowledges and practices are often sidelined or underrepresented.

The UN human rights committee found Australia had failed to protect Torres Strait Islanders against the impacts of climate change and violated their right to enjoy their culture, and to be free from arbitrary interference to privacy, family and home.

These rights respectively form Article 27 and 17 of the UN Universal Declaration of Human Rights. The complaint also argued on grounds of Article 6, the right to life, but this was not upheld.

In its decision, the UN considered Torres Strait Islanders’ close connection to traditional lands and the central place of healthy ecosystems for the maintenance of cultural practices. Connection to healthy country across land and seas as well as to culture, and the ability to maintain these, were determined to be human rights.

The committee said despite some action from Australia, such as new seawalls for the four islands by next year, additional measures were required to prevent potential loss of life.

Responding to the outcome, Yessie Mosby, one of the Group of Eight and a Traditional Owner of Masig said:

I know that our ancestors are rejoicing knowing that Torres Strait Islander voices are being heard throughout the world through this landmark case […] This win gives us hope that we can protect our island homes, culture and traditions for our kids and future generations to come.”

ClientEarth lawyer Sophie Marjanac, who acted for the claimants, said the outcome set a number of precedents. Specifically, it’s the first time an international tribunal has found:

The decision comes just months before this year’s COP27 climate talks in Egypt, and will add weight to growing international demands for loss and damages to be meaningfully included in international climate negotiations.

Among these are calls to include recognition of and compensation for kinds of loss and damage other than economic, such as health and wellbeing, ways of being, cultural sites and sacred places.

National governments are a key target of legal action. This latest decision is likely to spark more such cases in Australia and elsewhere. As UN Committee member Hélène Tigroudja said when explaining the decision:

“States that fail to protect individuals under their jurisdiction from the adverse effects of climate change may be violating their human rights under international law.”

The Group of Eight’s win joins similar Australian cases involving Indigenous rights. In the Tiwi Islands, for example, Indigenous people succeeded in stopping a proposal by energy giant Santos to drill for gas offshore from their islands.

Meanwhile, Youth Verdict’s success in the Queensland Land Court ensured First Nations evidence of the impacts of climate change would be heard on Country in their case against Clive Palmer’s Waratah Coal mine.

The UN committee said the Australian Government should compensate Torres Strait Islanders for the harms already suffered. They called for meaningful consultation with Torres Strait communities and measures to secure their safety, such as building seawalls.

So will the UN’s decision advance an Indigenous rights agenda in Australia as the climate crisis grows?

Attorney General Mark Dreyfus said the Government will consider the decision and respond in due course.

The development puts the onus on the Albanese Government to ensure Indigenous rights are upheld as part of climate policy and planning.

It also sends a clear signal that governments must act on climate change. This means not just reducing emissions, but helping more vulnerable regions to adapt to the damage already done.

Kristen Lyons is a professor in Environment and Development Sociology at The University of Queensland.

Disclosure: Kristen Lyons is a Senior Research Fellow with the Oakland Institute and member of the Australian Greens. 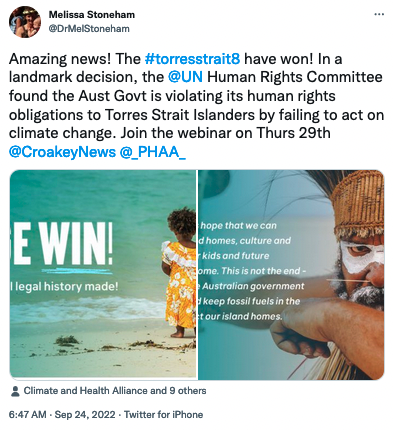 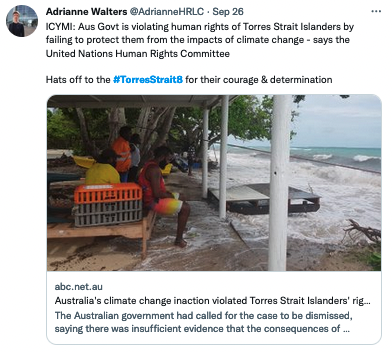 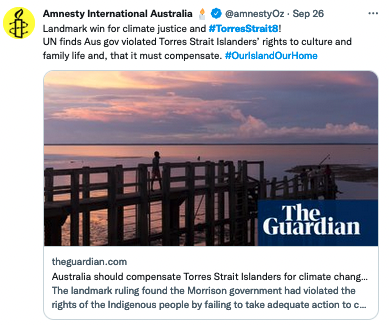 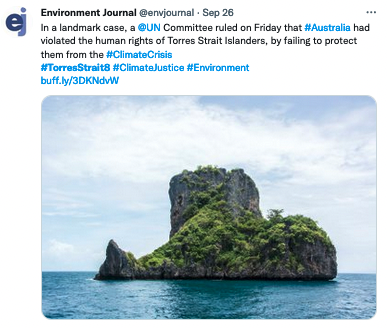 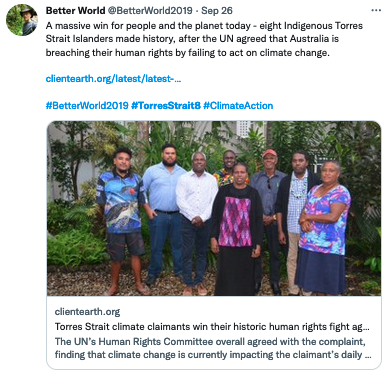