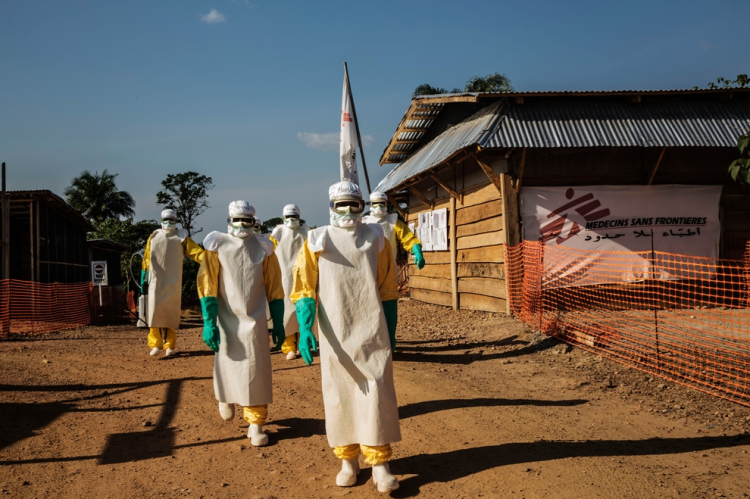 How many lives could have been saved with much earlier detection of Ebola? MSF hygienists in Sierra Leone during the Ebola outbreak in December 2014. Photo courtesy Anna Surinyach/MSF

Harnessing artificial intelligence to help prevent epidemics before they spread

Introduction by Croakey: As with the COVID-19 pandemic, health authorities usually identify epidemics through public health surveillance, but could we do it earlier by being able to mine “the vast un-curated public data available to us in this digital age”?

That’s the hope and challenge from leading epidemiologist, Professor Raina MacIntyre, who heads the Biosecurity Program at the Kirby Institute, and Arunn Jegan, Advocacy Coordinator at Médecins Sans Frontières (MSF).

They write below on the potential for harnessing artificial intelligence and the proliferation of the internet and social media for early detection of epidemics, saying that a signal for unusual pneumonia in China could have been detected in November 2019 and that CSIRO research showed that the Ebola epidemic in West Africa could have been detected three months before the World Health Organization was aware of it.

Imagine if the COVID-19 pandemic had been detected well before it spread around the world, when there was only a handful of cases contained within a small geographic location?”

Readers may also be interested in the series of articles published by the Croakey Conference News Service from the recent World Congress of Epidemiology, with one on innovative Victorian disease surveillance measures and their critical role in the state’s COVID response to be published soon.

The SARS-COV2 (COVID-19) pandemic has caused devastation around the world, and even in vaccinated populations, it continues to mutate into dangerous variants of concern. With the onset of the Delta variant, we assume the death toll will rise beyond five million in 2021.

This is an epidemic disease, which means it grows exponentially. One case today will be five cases in a few days and then 25 cases and so on. So, time is of the essence, and the sooner you can identify epidemics, the better the prospect of stamping it out and preventing global spread.

Imagine if the COVID-19 pandemic had been detected well before it spread around the world, when there was only a handful of cases contained within a small geographic location?

Isolating cases and tracing and quarantining their contacts may have been enough to stop it spreading.

Exponential growth and time are the enemies we face with epidemic diseases – the longer we take to act, the larger the epidemic will become and over a very short period. Just look at the Sydney outbreak which started in Bondi in June 2021.

Recall the West African Ebola epidemic in 2014. It was 67 times the size of the largest previously recorded Ebola outbreak, it reached urban areas, and killed more than 11,300 people.

Ebola outbreaks can kill 25 to 90 percent of those infected. In 2014-15, hundreds of health workers died, decimating the already-struggling healthcare systems of Liberia, Guinea, and Sierra Leone. Medecins Sans Frontieres (MSF) responded in each of these contexts.

In the Ebola outbreak, with fears of a pandemic on the horizon, organisations like the World Health Organization (WHO), MSF, and others supported national health systems by treating and isolating patients; tracing and follow up of patient contacts; raising community awareness of the disease such as how to prevent it and where to seek care; conducting safe burials; proactively detecting new cases; and supporting existing health structures.

When WHO was first notified of Ebola in March 2014, it may have comprised a few 100 cases, but it grew exponentially. By August 2014, the case numbers were in the thousands, and by October over 20,000 cases had occurred.

Furthermore, until only very recently, there were no tools to prevent or treat Ebola. Today a preventive vaccine and curative drugs are available. Imagine how many lives could have been saved if the epidemic had been detected when there were only a handful of cases.

Prior to COVID-19 in 2019, the Ebola epidemic saw the fastest trajectory to development of a vaccine, with Phase 1 trials in Oct 2014 to the approval of this vaccine in Nov 2019. Indeed, the average time was 10-15 years prior to both COVID-19 and Ebola vaccine developments.

For COVID-19, vaccines were developed and ready for use in less than 12 months, but after devastating global consequences of the pandemic and the hundreds of thousands killed in the global north.

In short, it is unwise to rely solely upon vaccines and or/ their development to manage an epidemic, especially in low-resource settings. Non-pharmaceutical interventions such as testing, tracing and measures to reduce contact between people are also important.

We have had a measles vaccine since the 1960s, however the disease rages through the world in epidemic proportions in over 41 countries such the Democratic Republic of Congo and Central African Republic.

The primary reason behind this is a deeply inequitable, and unfair global biomedical system which has unfairly provided for wealthier countries but not low-income countries.

We are seeing it play out with COVID-19, where only 1.8 per cent of people in low-income countries have received one dose, out of 5.4 billion doses administered globally.

What is Australia doing in response?

With COVID-19, the general public have had a taste of what epidemiologists have known for decades, that strong health surveillance is essential to getting on top of outbreaks and to have any chance of “zero elimination” strategies, or any suppression strategy for that matter, working.

While the global disparity of vaccination rates persists, what new technologies is Australia investing in to helping communities get on-top of outbreaks and bolster health surveillance?

How are we harnessing artificial intelligence together with the proliferation of the internet and social media for early detection of epidemics?

The usual way we identify epidemics is through public health surveillance – which is when labs or doctors notify health authorities of unusual, serious, or notifiable infections.

When lots of these notifications start piling up, or a trend is seen of higher case numbers than usual, the health official may investigate a possible outbreak.

But people talk about illness in their communities, and local news agencies report on unusual outbreaks, long before health officials know about it.

What if we could mine the vast, un-curated public data available to us in this digital age and detect signals of epidemics early?

At UNSW, the EpiWatch observatory does just that, tapping into news reports from around the world, in many different languages, using algorithms and artificial intelligence (AI) to detect early outbreak signals.

This is in no way a replacement for in-country based data collection or existing Early Warning, and Alert Response Systems (EWARS). Using AI in epidemiology is an additional tool that uses  innovative technologies and has the potential to reach communities who do not have the strongest national health surveillance systems.

It can also overcome censorship of information to detect signals in countries that are withholding outbreak information from the world. Reasons for censorship include fear of impacts on tourism, trade, or other parts of the economy, or political reasons.

Traditionally, declaring epidemics rest solely on the responsibility of governments, but never in human history has there been more attention on virology and epidemiology from the public. Therefore, ensuring that data-collected from the internet follows scientific modelling and surveying has never been more important.

As with most emergent technology using data and information to inform a product, the ethics over use of open-source data and safe-guards will need to be in place on who this empowers. Generally, however, methods such as used by Epiwatch do not utilise identifying or private information.

Moving forward the Kirby Institute at UNSW, with CSIRO Data 61 is exploring with MSF on how best AI can be utilised to detect epidemics as fast as possible and give vulnerable communities in low-income countries a fighting chance when epidemics strike.

Applying our lessons learnt from the COVID-19 pandemic and Ebola, now is the right time for Australia and the humanitarian community to invest in innovative health surveillance systems, and to keep potential epidemics isolated to save lives.

Arunn Jegan is Advocacy Coordinator at Médecins Sans Frontières (MSF) Australia. He is also the Permanent Facilitator for the emergency public health course at Epicentre in Paris. Arunn has worked as Head of Mission and Emergency Coordinator and has worked in Yemen, Syria, Venezuela, Bangladesh for MSF and in Afghanistan, Iraq, Jordan, Lebanon, and Turkey in senior management positions for other international NGOs. He specialises in social research, conflict/political analysis, complex project management, and humanitarian crisis coordination of public health emergencies.

See the Croakey Conference News Service coverage from the World Congress of Epidemiology.

PrevPreviousNew report on social gradient, societal impacts of COVID-19
NextTweeting up a storm on palliative care, including on the Waiting Room RevolutionNext