Have health reform efforts changed our perceptions and experiences of services?

Croakey contributors have recently been debating the impact of the Rudd/Gillard health reforms.

A recent survey of public opinion on attitudes to the Australian health system adds some new angles to this debate. The Menzies-Nous Health Survey (available here) is a biennial snapshot of Australian views on the health system.

The first survey was in 2008 – just as the Rudd reforms were being proposed. The most recent was in July 2012.

Each survey uses Computer Assisted Telephone Interviewing (CATI) methods to ask a representative national sample of 1200 their views. Some questions have now been tracked over three surveys, so a rough picture is emerging on changes since 2008, and the key findings are reported below.

Health of the Australian population: We think we’re a fairly healthy lot

Inequalities in Australians’ self-reported health status were also associated with levels of education, with 65 per cent of university-educated people describing their health as excellent or very good, compared to only 50 per cent of people who had completed school up to year 10.

The study revealed a positive overall shift in views towards Australia’s health care system, with 37 per cent of people agreeing that “on the whole the health system works pretty well”, compared to 21 per cent in 2008.

Similarly, the view that “there are some good things about the health care system however fundamental changes are required to make it work better” fell from 63 per cent to 54 per cent. This still means that over 60 per cent still support ‘fundamental change’.

Moreover, more than 85 per cent of respondents expressed confidence they would receive quality and safe medical care, effective medication and the best medical technology if they fell seriously ill. However, as noted earlier, confidence levels fall the more financially stressed people are.

The report shows only 37 per cent of Australians under high financial stress are confident they could afford the care they needed. This is a consistent trend over the past four years and is concerning given our free universal public hospital system and safety nets that aim to reduce out of pocket payments for those suffering financial hardship. 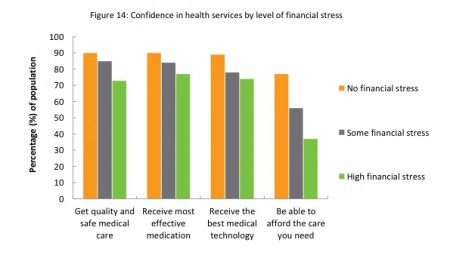 The picture was brighter for older Australians. People aged over 65 years and over generally reported greater confidence in the health system if they fell seriously ill compared to other age groups.

Drilling down further into the results, when asked about what improvements to the health system were required, the clear response (50 per cent) was the need for more doctors, nurses and allied health workers.

This comes amid state government health expenditure cuts and as yet no federal government funding commitment to National Partnership Agreements (NPAs) beyond 2014, which suggests government actions may be out of sync with public opinion – or that public opinion is still locked in a view of shortages and waiting lists not borne out by their reported experience of the encounters with the system.

In terms of access to General Practitioners, the vast majority of Australians (70 per cent) indicated they were able to make a same-day or next-day appointment to see a doctor based on their last visit.

The findings are similar to the 2010 study, indicating the Government’s improved access to primary care services have not improved perceptions of access to General Practice.

The survey also revealed the vast majority of Australians attend the same General Practice and see the same doctor – a proportion that grows to over 85 per cent for those over 65.  The proportions drop considerably for younger people, at their lowest for the age group with young families, but still over half.  There is a trade-off – those who see the same doctor or practice have much longer waiting times: one third are waiting more than three days.

Neither the preference for the same doctor, nor the longer wait times have changed much over the three surveys.

On the positive side, it appears that significant sections of the population are effectively ‘registered’ already – a point captured by some commercially minded practices that have recently attempted to set a priority fee. Patients can be assured of an early appointment if they commit (and pay the annual charge) to the practice.

On the other hand, heavy investments by governments, Labor and Liberal, do not seem to have reversed the perception of long waiting times and inaccessible after hours services by GPs. 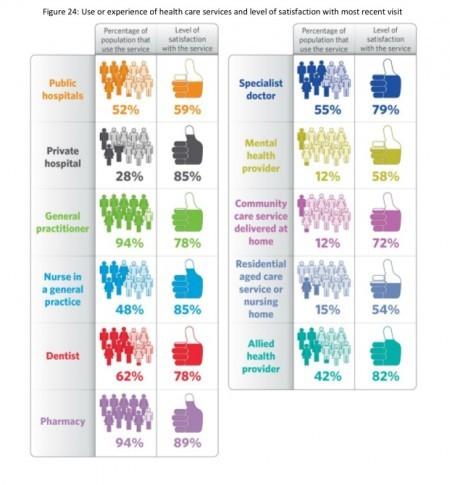 PrevPrevious#Sandy puts climate change on the agenda
NextIntern crisis is damaging us internationally (but what about the wider health workforce concerns?)Next