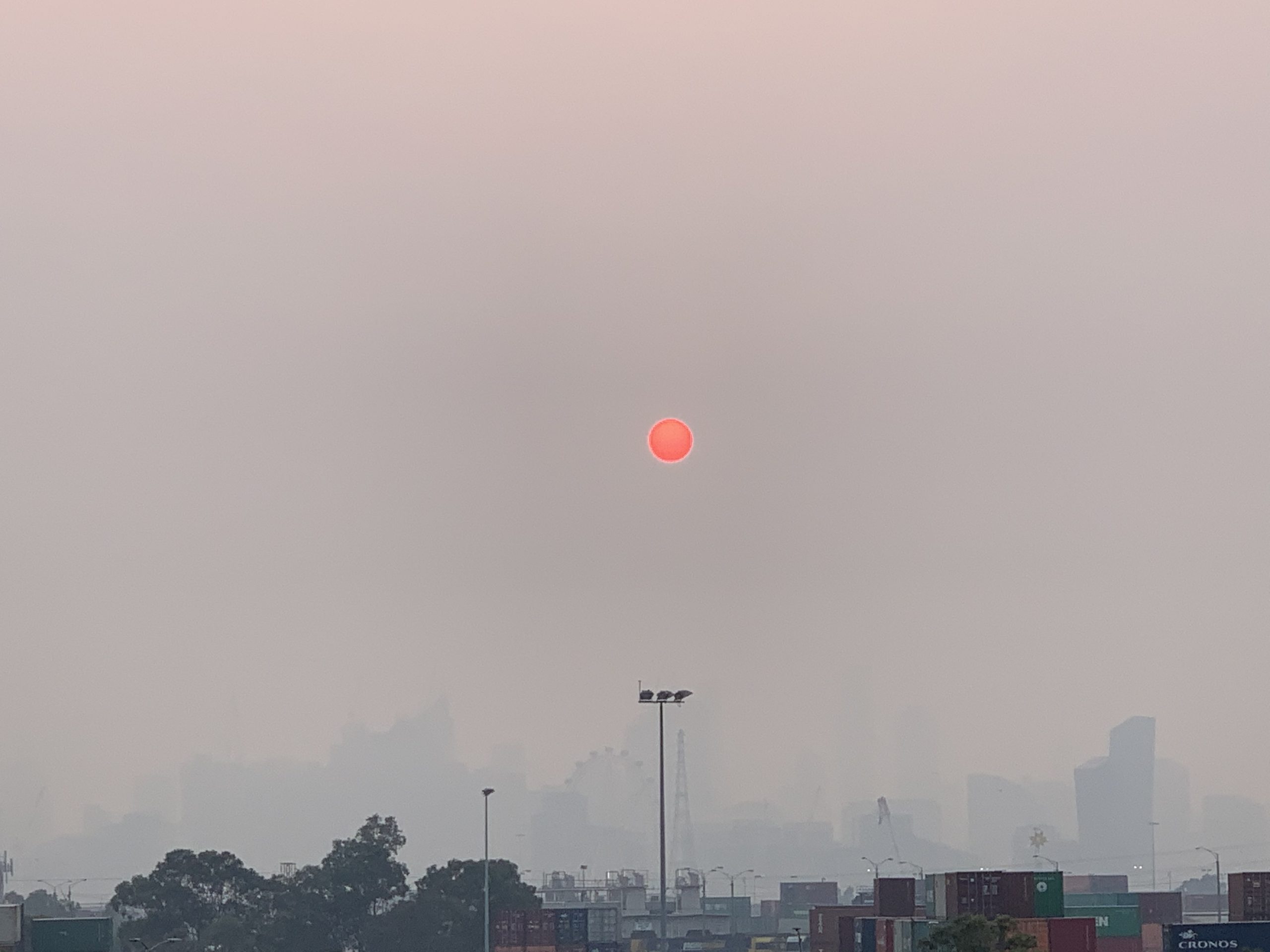 A 'view' of Melbourne CBD, from Footscray on 16 January 2020. Photograph by Frances Atkinson

Introduction by Croakey: The Federal Government has been urged to introduce an AirSmart campaign ahead of next year’s bushfire season, to improve understanding among the public and policymakers about air quality safety concerns.

In its submission to the 2020-21 Federal Budget process, the Public Health Association of Australia (PHAA) says the current bushfire season has highlighted the need for an evidence-based and consistent program to translate emerging evidence about air quality.

“Public and policymaker literacy on evidence and technical aspects of air quality have been shown to be well below what will be necessary as we face ongoing issues with air quality in Australia,” says the submission.

The PHAA suggests the AirSmart program be modelled on the experience with the SunSmart program, which has changed Australian attitudes and behavior around sun protection and skin cancer prevention.

The submission also says core funding must be provided to the AirRater program, based at the University of Tasmania, which provides a free downloadable app giving access to the best available air quality data in real time.

Meanwhile, Victoria University academic Dr Efrat Eilam has urged the Federal and state governments to work together to establish a coordinated health protection plan for future smoke waves, and also has some specific suggestions for the Victorian Government.

(And see the Croakey archive of stories on air pollution and health).

While Melbourne was engulfed by a series of smoke waves, there were: joggers on the streets, families picnicking by the beaches, carers pushing prams outdoors, athletes collapsing during competitions, and only a small fraction of the population wearing face-masks.

One couldn’t help but ask: Why isn’t the Government exercising precautionary measures to protect the public, issuing warnings of the health risks? Why isn’t the Government closing down outdoor events, providing face masks to street dwellers, and doing all the hundreds of tasks required in managing what can be rightfully termed, a public health crisis?

What is needed is a coordinated public health management plan for future smoke wave events in Victoria.

While the Federal Government is framing the catastrophe as an economic crisis, rather than as an ecological and a humanitarian crisis, it is important for state governments not to prioritise economic loss aversion over public health.

There is a need to establish a governmental body that can coordinate the various organisations responsible for managing public health, and provide a timely proactive response to future smoke waves.

Smoke waves are created from the combustion of everything that is on the ground – building materials, furniture, wood, plastics, electrical devices, fertilisers, pesticides, fungicides, animals and plants.

Smoke waves are known to contain high levels of particulate matter PM10 (particles with a diameter of 10 micrometre (μm) or less) and PM2.5 (a diameter of 2.5 μm or less). These may contain a wide range of toxic chemicals.

Heavy metals contained in particulate matter PM10, such as arsenic (As), cadmium (Cd), lead (Pb), mercury (Hg) and nickel (Ni) cause cancer. The various metals were shown to negatively affect most body systems. Furthermore, exposure to arsenic has also been associated with diabetes. The burning of plastics causes cyanide poisoning.

PM2.5 is known to have the highest impact in terms of premature deaths. The health risks from exposure include development of chronic respiratory and cardiovascular diseases, including asthma and emphysema, and increases in lung cancer mortality.

While some groups, such as children, elderly people, pregnant women and those with pre-existing health problems, are more vulnerable, everyone exposed may be affected.

The World Health Organization clearly asserts that there is no safe level of expose to PM2.5 (WHO, 2006). For every increase of 10 μg/m3 (microgram per square meter of air) in PM2.5 concentration, there is an increase of six percent in cardiopulmonary disease, and eight percent in lung cancer mortality. The recent events showed worrying increases of 370 μg/m3 and above.

Humans may not only be affected by the toxins through inhalation. Wildfires contaminate open water reservoirs and soils. These contaminations may persist over time and, if unchecked, they may be passed to humans through drinking water and food supplies.

While much of Victoria state’s resources have rightfully been applied to fight the fires, there has been an uncoordinated response to the smoke waves in communities downstream from the fires.

However, these frameworks do not provide any measures for coordinating, communicating, or providing effective health guidance and response.

Further fragmentation in public health management is found in the division of responsibilities between EPA and the Department of Health and Human Services.

On the Internet site, health.Vic, the EPA’s responsibilities are described as follows: ‘EPA provides information, advice and warnings about the impacts of smoke from fires … on the environment and community health’.

The Department of Health and Human Services responsibilities are described as ‘managing environmental health queries that are not related to pollution or waste’.

Further confusion arises when the EPA site refers citizens back to the Department of Health in regard to individual health queries.

The result of this uncoordinated approach was evident throughout the 2019-20 crisis. No health warnings and preparedness instructions were issued prior to the approach of the smoke waves.

Once the smoke arrived, members of the public were left to fend for themselves and figure out the situation, spending hours navigating between various internet sites (EPA AirWatch, VIC Emergency, ABC News and others) in attempts to understand what they should be doing and when.

However, the majority of people (judging by the minuscule use of face-masks in Melbourne CBD) seem to be left clueless, carrying on with their lives as though the hazardous air quality posed no acute risk.

The Government’s inaction also seems to inadvertently contribute to enhancing social inequality. This is because the people most likely to be negatively affected are those who are less likely to defend themselves without direct governmental proactive intervention. These may include various marginalised groups such as people experiencing homelessness and people with addictions.

At times of imminent health risks, the Government has a critical role in preparing the public in advance. They should be explaining the risks prior to the events, not after they unfold.

The public needs to be well prepared and informed in regard to issues such as: Which masks should be sourced? What are the appropriate air cleaning devices? And, how to seal windows and doors from air exchange?

There should be a person (a human, not an Internet site) responsible for reaching out to the public before and during the crisis, providing clear instructions when to stay at home, and when to come out, when to put masks on and when to take them off, according to locations.

The only thing that a government should not be doing is to continue a ‘business-as-usual’ approach when it concerns public health protection during smoke wave events.

Yet a business-as-usual approach seemed to characterise the responses of both the Federal Government and state governments.

Throughout the crisis the Federal Government has been using the media to create a discourse that portrays the fire disaster as an economic crisis, rather than what it is: a major ecological and humanitarian crisis, with severe implications to public health.

This can be exemplified by the continuous outpour of pacifying information regarding the millions of dollars diverted to fire management.

This ongoing dollar-counting exercise conveyed via media outlets sends a message that wildfires are a mere economic problem, and that throwing government dollars on the fire will extinguish it.

Such discourse may inadvertently lead to prioritisation of the economy over people. An extreme expression of the ‘economy first’ attitude was the State government’s lack of intervention when the Australian Open decided to proceed under hazardous conditions.

The Government allowed economic interests to take precedence over its duty of care. This put both players and audience under acute health risks, with consequences yet to be seen.

The health consequences of the current crisis will be unveiled in the coming years.

Understandably, during the crisis the Government was doing its best to protect lives within the fire zones and support those within immediate range of the fire.

However, hopefully down the track, when the fireys return home, and we begin to emerge from the crisis, it is essential the Federal Government and the state governments work together to establish a coordinated health protection response plan for future smoke waves.

The more lessons learnt from the current ecological and humanitarian disaster, the better Australia will be prepared for future climate change health hazards.

See the Croakey archive of stories on air pollution and health.