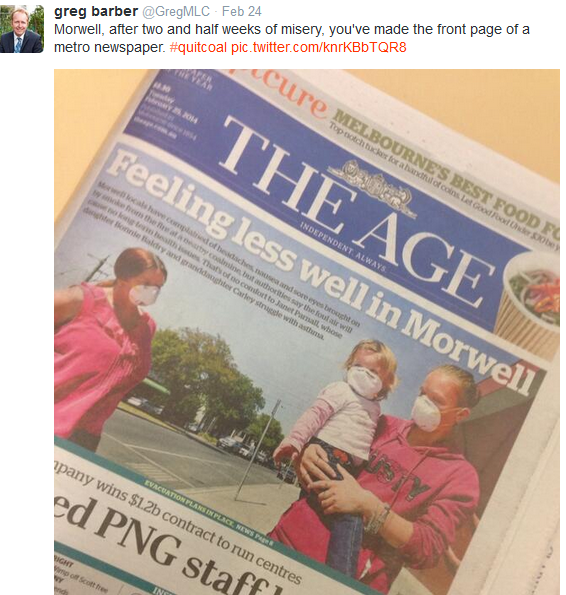 The health risks of smoke from bushfires are becoming better known – as are the steps to take to reduce harm. However, the fire that has been burning since February 9 in the Hazelwood open-cut mine in Victoria’s LaTrobe Valley – and which may continue to blanket the local community in smoke for weeks, even months to come – poses new concerns, and challenges, for health, the environment, and emergency and industrial management.

Unlike most bushfires which burn through relatively large areas relatively quickly, the Hazelwood fire is confined to the coal mine and has burnt on for weeks, all in close proximity to the large country town of Morwell, population around 14,000. See photos taken by the CFA of the blaze and firefighting efforts.

Amid growing alarm, local council and emergency services have begun doorknocking every home in the area, while some residents are reported to be gathering evidence for possible class action against the mine’s owners for health and economic impact.

Law firm Slater and Gordon has said it’s received “many enquiries” from people living in the Latrobe Valley affected by the smoke and ash.The State Government has opened a respite centre and 25,000 face masks have been distributed around the local area by the Latrobe City Council.

Victoria’s already had a big start to the year in terms of natural disasters, marking the fifth anniversary of the devastating 2009 bushfires, a heatwave, and fires burning through the Grampians national park for nearly two weeks, occasionally threatening local towns.

But the slow-burn of the Hazelwood fire seems to have caught the state by surprise. There have been complaints from residents and politicians that authorities have failed to provide enough information and downplayed the risks by not evacuating the area or declaring a state of emergency. Melbourne’s media has also come under fire, as the tweet (above) from Greens MP Greg Barber shows.

The Victorian Chief Health Officer Dr Rosemary Lester  advises that excessive smoke levels can not only aggravate existing heart or lung conditions, but may also cause members of the community to experience irritated eyes, coughing or wheezing.

“Everyone should avoid prolonged or heavy physical activity and keep informed about fire activity in their immediate area” Dr Lester said.

“Anyone with a heart or lung condition should take their medication as prescribed by their doctor.

“People with asthma should follow their asthma management plan.

Lester’s latest health advisory provides a range of resources and precautionary advice and the overwhelming message from her office and the State Government has been not to panic: but she admitted in a radio interview earlier this week that she personally  would try to leave the area if she was a local with a young child. The Government has encouraged local residents to get “respite” away from the region where they can, and appealed to other Victorians to open up their holiday houses to Morwell people needing a break. 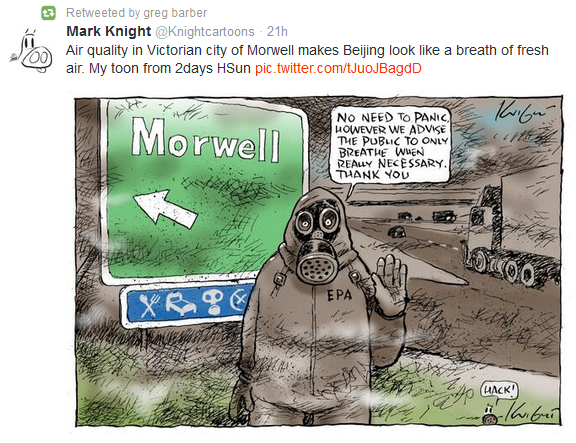 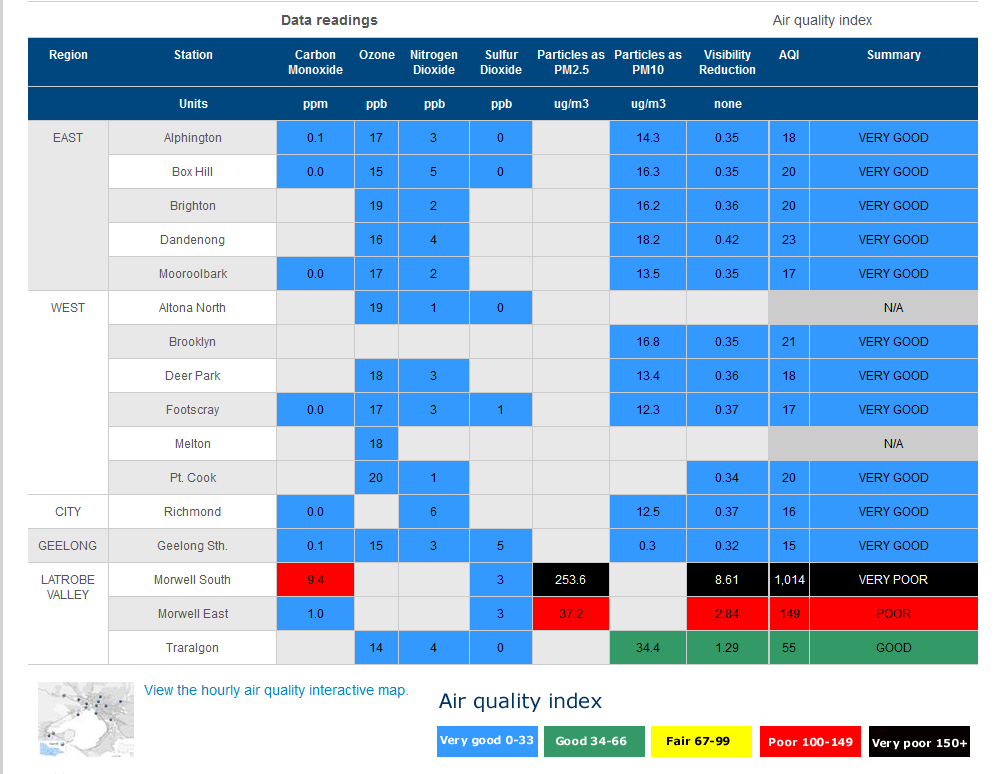 The Public Health Association of Australia (PHAA) has called on the Victorian  Government to set up an inquiry to prevent a repeat incident at Hazelwood, or elsewhere in Australia, and to implement a comprehensive monitoring program to document the health impact of the fire which has proven impossible to put out.

In a statement, the PHAA spokesman Dr Peter Tait says:

“We know from the extensive health and medical literature over many decades that burning coal poses serious adverse health risks for people in proximity to power stations and even for communities quite distant from the source.

“When coal is combusted it can produce a mix of toxic gases (polyaromatic hydrocarbons), chemicals (nitrous and sulphur oxides), and heavy metals, such as mercury, as well as large qualities of tiny particulates.”

“All these can have health effects in the short and longer term.”

The PHAA wants a “comprehensive, widely dispersed monitoring program to document the levels and type of pollution people are being exposed to in the Latrobe Valley, with all data collected being made public.” It said:

“It appears there has a been failure at a couple of levels: that the risk of a coal mine fire was not anticipated, despite the severe fire danger warnings, and the government has allowed firefighting sprinkler equipment to be removed, leading to such a serious situation for public health.

It said the issue also highlights the risk of using coal for electricity.

“Health effects are local, as we are seeing here, as well as contributing to those caused by global warming and sea level rise.”

The Environment Defenders Office has called for a full independent public inquiry to thoroughly investigate “how this major pollution incident was allowed to happen.”   It notes that major incidents in the past, like the Brookland Greens methane gas leak and the 1991 Coode Island fire, have been the subject of independent inquiries.

PrevPreviousOn breaking down the barriers between health and legal issues: insights from @fionalander as @wepublichealth
NextHazelwood mine fire: health risks and public health response optionsNext