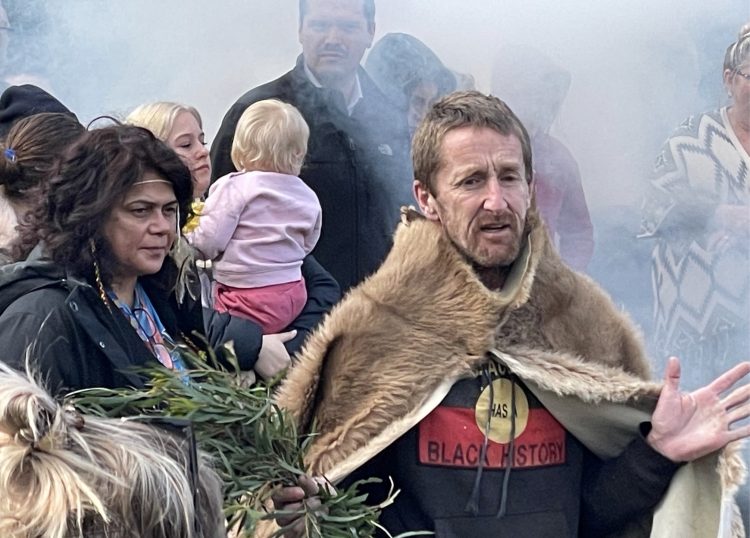 Jason Smith talks about the importance of cultural burning for healing country and future generations, at a NAIDOC Week event in southern lutruwita, Tasmania, 5 July. Photo by Melissa Sweet

Heal Country – a timely call for action and justice

The theme of NAIDOC Week – Heal Country – underscores the urgency and importance of working for climate justice, informed by Aboriginal and Torres Strait Islander peoples’ knowledges.

Historical truth telling, including around the role of colonisation in harming Country, is also critical, write Dr Janine Mohamed, a Narungga Kaurna woman and CEO of the Lowitja Institute, and her colleague Nicole Bowman, a Wiradjuri woman and senior policy advisor at the Institute.

We congratulate the National NAIDOC Committee for the 2021 NAIDOC theme, Heal Country! This year’s theme is a timely reminder for all Australians about the importance of greater climate action and what Aboriginal and Torres Strait Islander peoples’ wisdom, knowledges and practices can offer our collective efforts for climate justice.

After unprecedented bushfires, record temperatures, damaging hailstorms, and rising seas, Aboriginal and Torres Strait Islander peoples know only too well the ongoing effects of destruction and marginalisation of Country.

To truly heal Country, we have to understand this history. We need historical truth-telling about the destruction of Country, the pollution of our waterways and lands, the introduction of foreign species, and the gouging of Country for minerals.

For countless generations, Aboriginal and Torres Strait Islander peoples have maintained cultural practices that are closely tied to ancestral lands, and these ancestral lands tie us to our identity. These practices included living sustainably, and not taking more than what was needed (for example, to feed the family) and using resources in their entirety, nothing was wasted or overused and that’s how Country was maintained for so long.

We have always known we don’t sit outside of nature and our ecosystem – we are a part of it. Our people have been practising planetary health for tens of thousands of years, understanding and respecting the intricate linkages between the health of humans, and other life forms, including Country.

These ancestral knowledges are in our DNA. We have survived ice ages, as recently as 20,000 years ago, and many changes to the environment over millennia through our, knowledge of country, keen observation and modification of life.

As the Australian Geographic wrote a few years ago, extreme changes in the environment on the continent we now know as Australia continued for thousands of years, “and Aboriginal life readjusted in the process”.

Colonisation of course stopped all that.

The starting point for healing Country is to know and accept the wrongs of the past and make sure to never repeat these wrongs.

To heal Country, we also need to understand the importance of culture and Country to our health and wellbeing.

Dr Ray Lovett’s work on the cultural determinants of health, through Mayi Kuwayu: the National Study of Aboriginal and Torres Strait Islander Wellbeing tells us why this is critical.

It is showing clearly how being unable to express our culture has negatively affected our health and wellbeing.

It also tells us – and it’s a message for all Australians – that if we take care of Country, Country takes care of us.

In recent times we have seen good steps taken in Australia to protect our cultural determinants, such as the ban on climbing Uluru in 2019. But we have also seen the reckless destruction by Rio Tinto of the 46,000-year-old sacred site at Juukan Gorge, a domestic and global tragedy and loss.

We clearly still have much to learn and do.

It is widely recognised globally that Indigenous people are among the first to face the direct physical, economic and cultural consequences of climate change, despite contributing the least to it.

Climate change exacerbates many of the inequities already faced by Indigenous peoples globally, including – as the United Nations said more than a decade ago – “political and economic marginalisation, loss of land and resources, human rights violations, discrimination and unemployment.”

We would add to that the issue of health access and equity. Climate change will create ever growing demand on the health system but, in a heatwave for example, many Aboriginal and Torres Strait Islander people won’t go to a health service where they feel unsafe.

The 2020 and 2021 Close the Gap reports, written by the Lowitja Institute for the Close the Gap Campaign, both focus on the need to heal Country, particularly through climate action.

As the 2021 report said, identity, cultural practices, social systems, traditions and concepts of spirituality are all drawn from, and depend upon connection to Country.

This connection has physical, spiritual and cultural dimensions, linking people to the Dreaming, language, kinship systems, lore and culture, as well as traditional foods and medicines.

The reports showcase amazing work that Aboriginal and Torres Strait Islander peoples and communities are doing and their outstanding leadership throughout critical crises, including the 2019-20 summer bushfires.

And they highlight how Aboriginal and Torres Strait Islander peoples are uniquely equipped to drive solutions to deal with the climate crisis, using experiential, traditional and cultural knowledge, including through cultural burning practices, carbon farming, and the protection of natural and cultural heritage, as well as raising awareness of the impacts of climate change and advocating for action.

As the deadly Seed Mob youth climate movement declare: “All around the world, sea levels are rising. And so are First Nations people.”

And indeed, we are. We are on the frontline of the devastation of climate change, and we fear that time is running out.

We see that already for our own mob.

The drought that was experienced across New South Wales and Queensland in 2019 impacted on many Aboriginal populations, including food security and the fish traps at Brewarrina (Baiame’s Ngunnhu) which has always been a significant cultural site for local and surrounding communities.

There are now fears that there won’t be any river left in the coming decades.

This did happen in the nearby town of Walgett (the name is an Aboriginal word meaning ‘the meeting of 2 waters’), when the rivers ran completely dry, and the town had to rely on donations and deliveries from the Aboriginal medical service. Similarly, we have seen the devastating effects of over irrigation from fruit and cotton farmers on the Darling River near Wilcannia (also known as the Baarka in Barkindji language) which impacted on the community, the fish and the wildlife.

The devastation to our rivers from no rain, lack of water flow, loss of fishing for traditional foods and gathering of plant food is very significant to the deterioration of the social and emotional wellbeing of our communities.

As called for in this year’s Close the Gap report, governments urgently need to invest in mitigation, prevention and adaptation planning for the climate crisis with Aboriginal and Torres Strait Islander communities.

We also call on government to develop, implement and fund a cultural governance, maintenance and revitalisation investment plan.

Traditional knowledges, land management and conservation practices are valuable resources for maintaining biological diversity and preserving important ecosystems. They need to be an integral part of our national climate change mitigation efforts.

Climate action is a huge priority for our peoples.

To address this priority we are working with the National Health Leadership Forum and the Climate and Health Alliance to have important discussions about climate change and its impact on the health and wellbeing of our peoples.

We want to talk about what we can do as a collective to address the impacts of climate change and keep our mob safe and well – to heal and protect Country which is so central to our cultures and wellbeing.

We are currently seeking Expressions of Interest for the development of a Climate and Health Discussion Paper, to outline the issues of climate change in Australia and how it is impacting on the health and wellbeing of Aboriginal and Torres Strait Islander peoples.

The paper will inform discussions at an upcoming Climate and Health Roundtable, which will bring Aboriginal and Torres Strait Islander health leaders, community experts and key thinkers together.

This NAIDOC Week, we urge our allies to do some deep thinking and listening on this.

People want climate action to happen until it makes them uncomfortable. As we already know, prevention is better than cure!

To heal Country, we need to challenge not only our ways of doing but our ways of thinking. We need to put Country before comfort, for the health and wellbeing of us all. 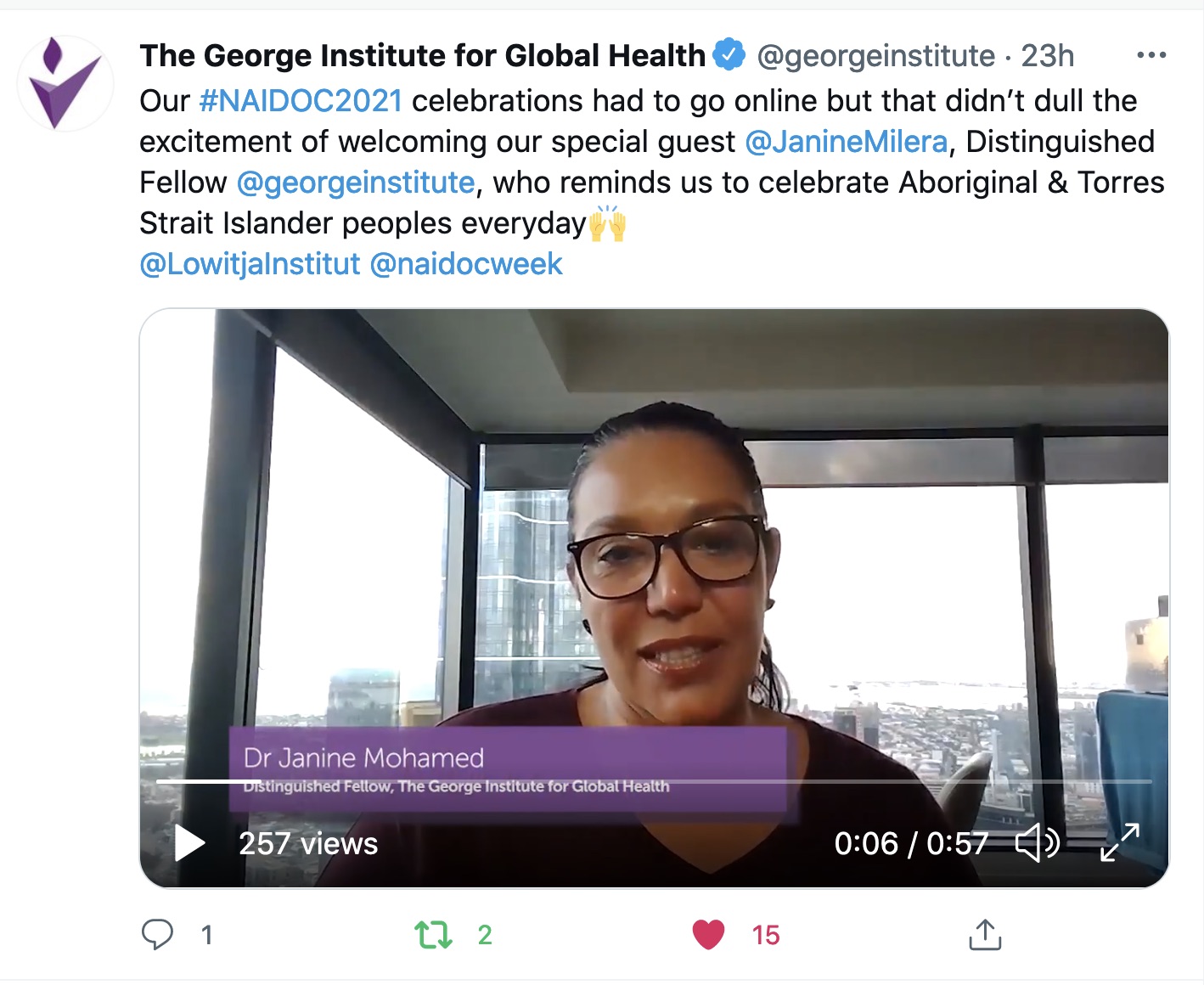 Watch the video featured above here.

See our previous coverage of climate and health.

PrevPreviousIs it more infectious? Is it spreading in schools? This is what we know about the Delta variant and kids
NextWhen should mandatory vaccination be on the agenda?Next