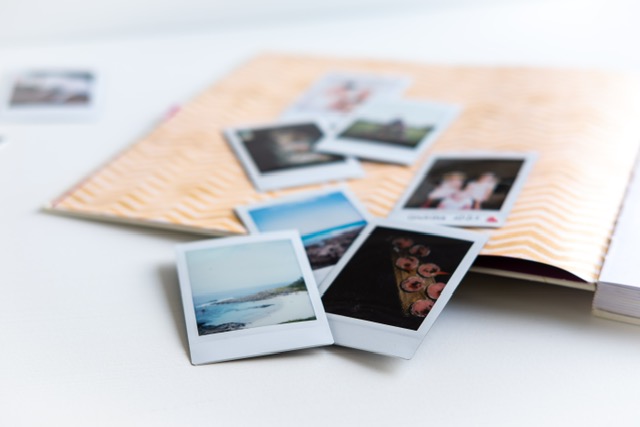 HEAL2022: engaging with climate complexity through snapshots and stories

Introduction by Croakey: What overarching principles should underlie our collective response to climate change?

As reported by Croakey’s Editor in Chief Dr Melissa Sweet late last week, this is a question that is currently under discussion in Australia, as we belatedly work to develop our first ever National Health and Climate policy.

Participants in the recent HEAL2022 conference engaged deeply and broadly with the values, principles and actions that a wide range of actors within and outside health can bring to the table, as we seek to address the complex and intertwined health crises that climate change has engendered.

Below, Marie McInerney presents a sampler of what was on offer.

Previous articles related to the HEAL2022 conference are bookmarked here at Croakey.

The need to decolonise research, policy, and advocacy was a central message and motivator at the recent HEAL2022 conference, in multiple sessions focusing on Aboriginal and Torres Strait Islander knowledges, culture and Country, and from Pacific speakers in a panel session.

The conference also heard about the need for innovative solutions for planetary health – including the EPIWATCH initiative being led by epidemiologist Professor Raina MacIntyre – and for a focus on finding the middle ground between motivation and paralysis on climate action which is firmly anchored in climate justice.

Here are some snapshots of key presentations.

1.    In climate research and action, do things ‘proper way’

The devastation has led to an ongoing ‘two way’ community-based participatory action research project, Waka Ŋurrkanhayngu – Regenerating the Existence of Life Working Together, which is the first initiative to holistically explore how Yolŋu worldviews, knowledges and cultural practices can strengthen individual and collectivistic adaptive capacities, and reduce the risk of disasters.

“What makes Yolŋu stronger” is at the heart of Waka Nurrkanhayngu, said UC Professor Ḻäwurrpa Elaine Mayanhayngu, who is an Elder from the Waramirri clan, a senior Yolŋu educator and a founding member of the Yalu Foundation.

“We have a strong culture, strong language and strong identity,” she told the conference, describing the role of Elders to “support our knowledge and to lift our spirit, to guide us to be strong in our own culture, in our own feet, and in our own foundation…. (in) kinship, language, culture, ceremony, healers — physically, spiritually, emotionally.”

The initiative also identified the diverse and interacting colonising aspects and processes that are designed to weaken Yolŋu and have led collectively to a situation where “Balanda (non Indigenous people) work and walk on top of Yolŋu”, Ḻäwurrpa said.

UC Associate Professor Petra Buergelt talked about how these colonising practices are “oppressing Yolŋu and creating all the devastating issues Yolŋu have experienced, and still are experiencing. Whatever Yolŋu do or where they go, there is a colonising system which is pressing them down,” she said.

Buergelt told the conference that as well as seeking to revive and strengthen Yolŋu law, knowledges, culture and governance, and to rebuild Indigenous capacities that reduce the risk of natural disasters, the initiative also sought to promote recognition of the tremendous value of Indigenous culture.

Indigenous cultures, knowledges and worldviews are the key to our survival, not only the survival of Indigenous peoples, but survival of the whole of humanity.”

Maypilama described the decolonising approach being taken with the research, in which Western researchers work together “two-way long-term” with a team of community-based senior and future Elders, using in-depth yarning sessions with Elders and Senior Elders across all 16 clans.

This approach, she said, has helped community and visiting researchers to build up long-term equal and trusting relationships that enable them to address the needs of the community: “learning from both worlds knowledge, Yolŋu and Balanda”.

Read more about this project here. 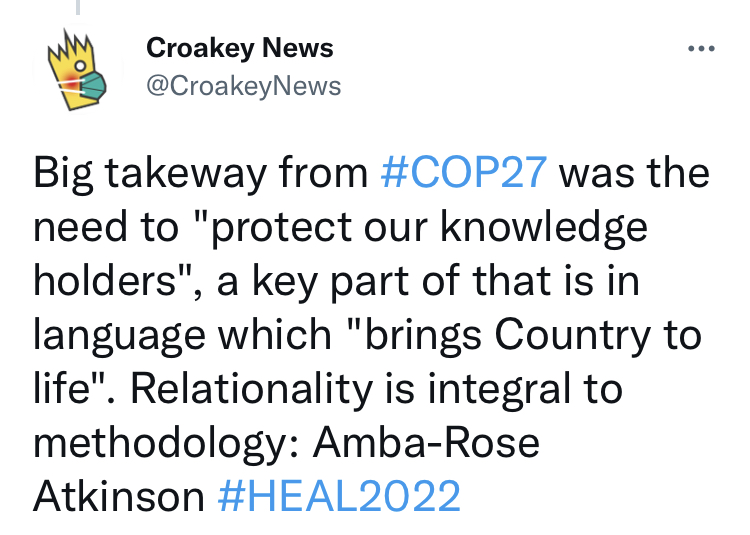 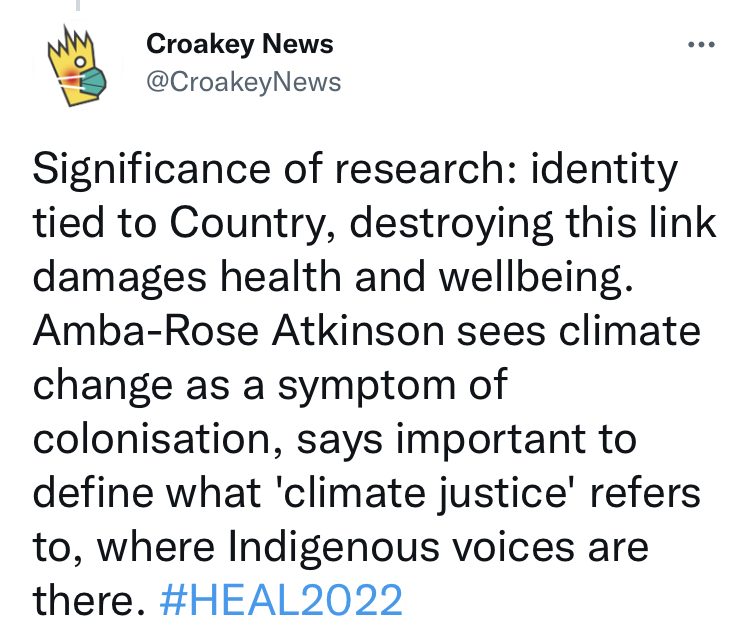 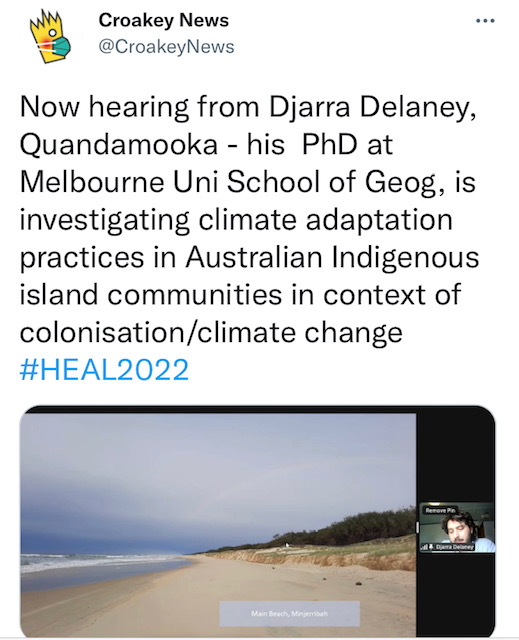 See the full Twitter thread of this and other sessions.

2.     What really brings about sustained transformation?

This was a key question — and an explicit challenge for developed nations and Western researchers — that was posed at #HEAL2022 by Professor Donald Wilson, Associate Dean for Research at the College of Medicine, Nursing and Health Sciences of the Fiji National University and founding director of the Fiji Institute of Pacific Health Research. 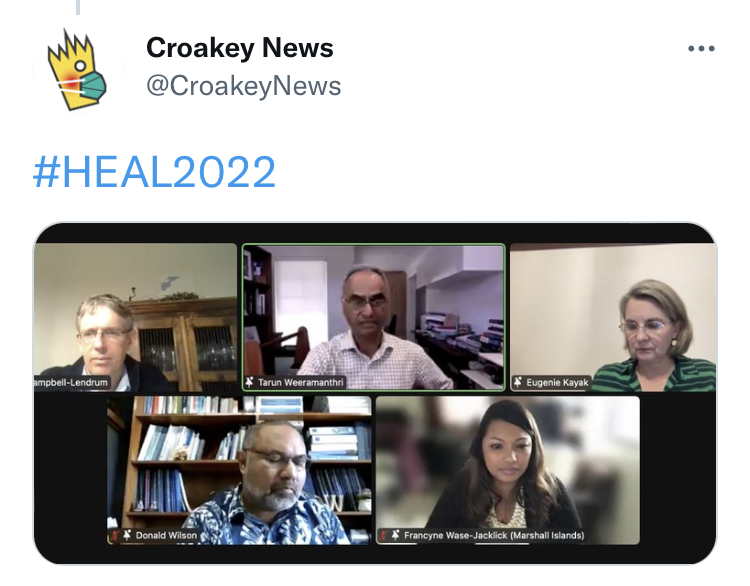 But Wilson’s main interest, he said, was in talking about the management of international aid, “seeing how funds are used in ways that are sustainable for people on the ground”.

Echoing the calls of many Aboriginal and Torres Strait Islander people at the conference, he highlighted the five principles of the 2005 Paris Declaration on Aid Effectiveness: 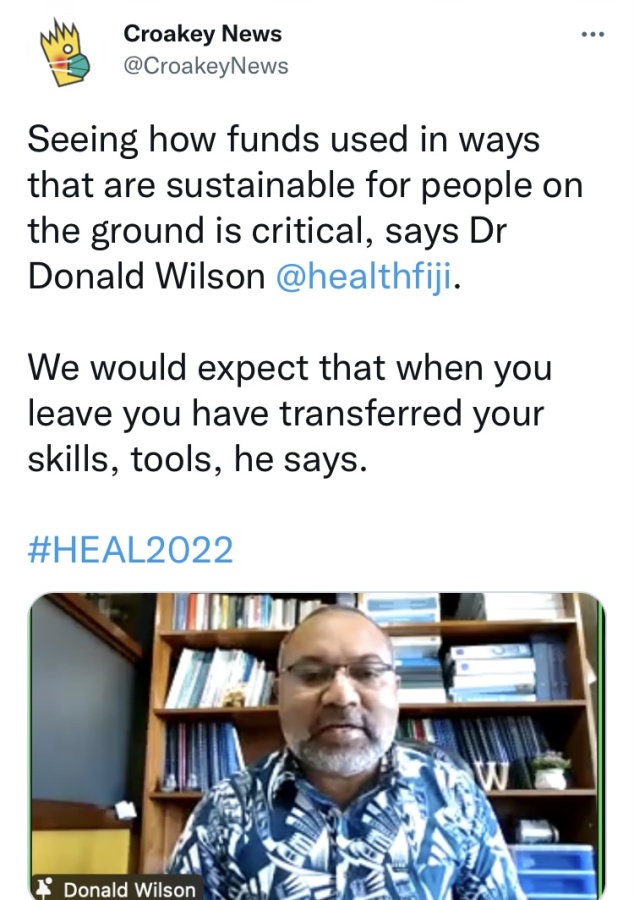 Wilson also emphasised that systems can only be truly transformed if there is genuine capacity building for Pacific and other developing nations, saying sometimes capacity building is written into project or grant proposals without much clarity about what it looks like.

He referred to a 2004 paper on “a hierarchy of needs” for systemic capacity building, saying international aid too often leads to perpetual dependency, “which does not help in terms of sustainability”.

The layers of capacity include:

Workload capacity. “Are there enough staff with broad enough skills to cope with a workload?”

Facility capacity? “Do we have training centres big enough to support that?”

“I think it needs to be very clear, in any kind of an engagement, that when we talk about capacity building … what does it really look like? And I think that will bring the transformation on the ground,” Wilson said. 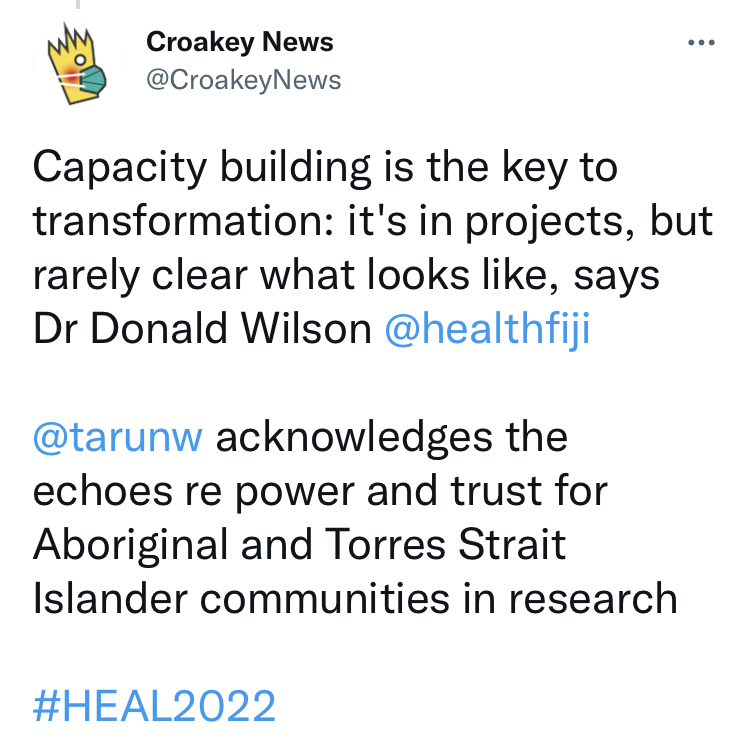 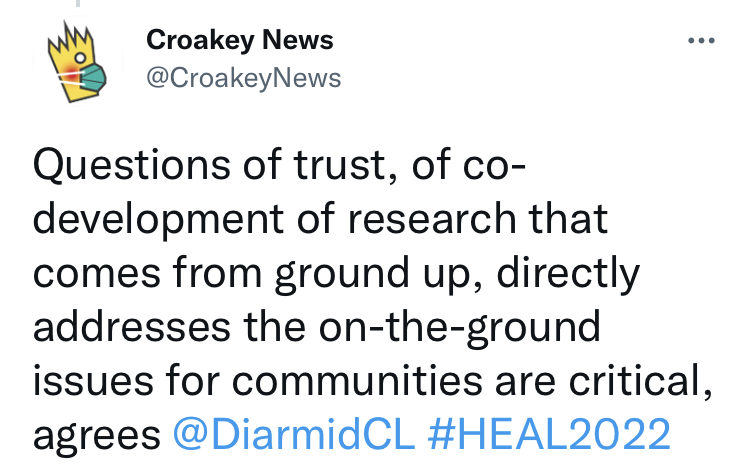 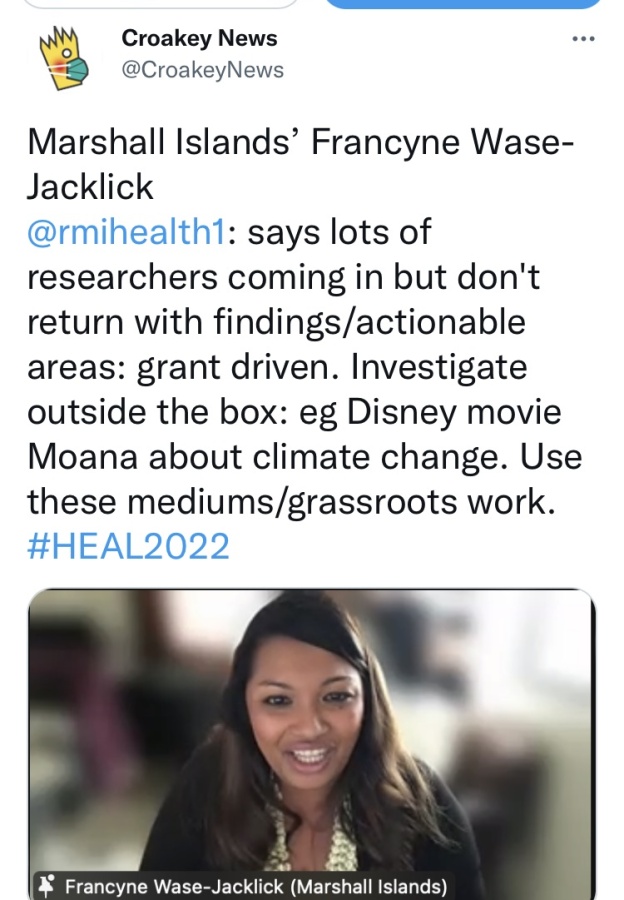 3.    Data as a tool to surveil pandemic and climate issues Tapping into social media and news reports from around the world, the aim is to head off pandemics before they reach levels of exponential growth “that causes health systems to collapse, supply chains to be disrupted and critical infrastructure to be affected in society”, MacIntyre told #HEAL2022.

We live in an information age and a digital age where there is vast open source data, and in other fields like in policing and law enforcement intelligence, they do harness that data to look for, for example, planned terrorist attacks,”

“We can do that for public health,” she said, noting however that, while artificial intelligence is in widespread use in acute medicine, “public health has been slower to adopt”.

MacIntyre said EPIWATCH didn’t have funding at the end of 2019 when COVID-19 emerged, but researchers went back retrospectively and “were able to find a signal in mid-November in Wuhan”.

She said EPIWATCH was also looking at issues in Ukraine, observing a rise in certain infections since the Russian invasion, including tuberculosis, HIV and measles, and also detecting signals for radiation and nuclear events.

MacIntyre’s team is also working on adapting the EPIWATCH platform to provide an early warning on disinformation or community sentiment, such as anti-vaccination or anti-mask sentiments — “behavioural factors that can affect a pandemic response”.

But she said, for it to meet its goal of “preventing the next pandemic”, its methods need to be accessible and widely used. “It can’t just be an elitist tool that’s used by a tiny fraction of people, it needs to be used at the grassroots everywhere”.

How do we as individuals come to grips with difficult trade-offs, painful losses, and actual limits of individual and collective action in the face of seismic climate change so we can move towards collective, transformational adaptation that is inclusive, fair, and sustainable? 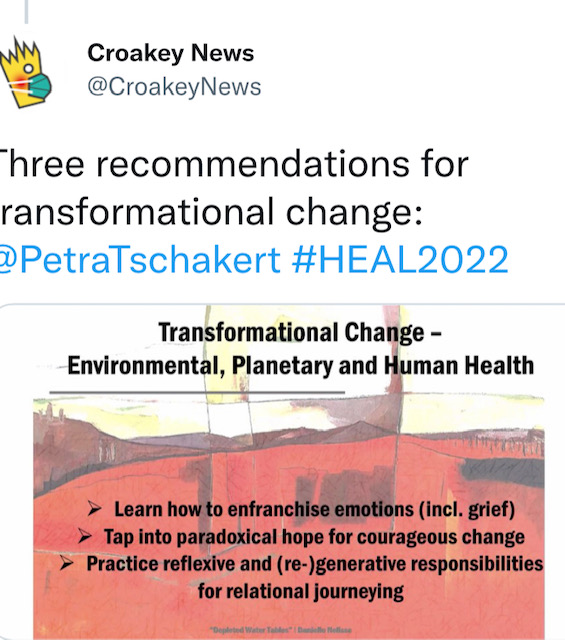 Professor Petra Tschakert, Professor of Geography and Global Futures at Curtin University and Coordinating Lead Author on the 5th Assessment Report as well as the 1.5°C Special Report on Global Warming of the Intergovernmental Panel on Climate Change, had three recommendations:

Tschakert has worked extensively with a team of scholars, including with former federal Labor Health Minister Dr Carmen Lawrence (see an earlier Croakey interview), on issues of intangible loss from climate change. This entails the emotional complexity of solastalgia, the notion of being homesick in a place that has radically changed, something she says is being seen across Australia.

Tschakert is the lead investigator in an interdisciplinary research project titled ‘Locating Loss from Climate Change in Everyday Places’ in Western Australia, tracking the ways that around 100 participants along an urban–rural transect see their lived values threatened in both mundane and dramatic ways, making value trade-offs between seemingly tolerable and intolerable losses.

Researchers went out with participants to the places they cherish most, ‘places of the heart’, conducting ‘slow research’, to “track, understand how people balance their emotions, their emotional repertoire, by talking about changes they have witnessed and anticipate in the places they like most”. 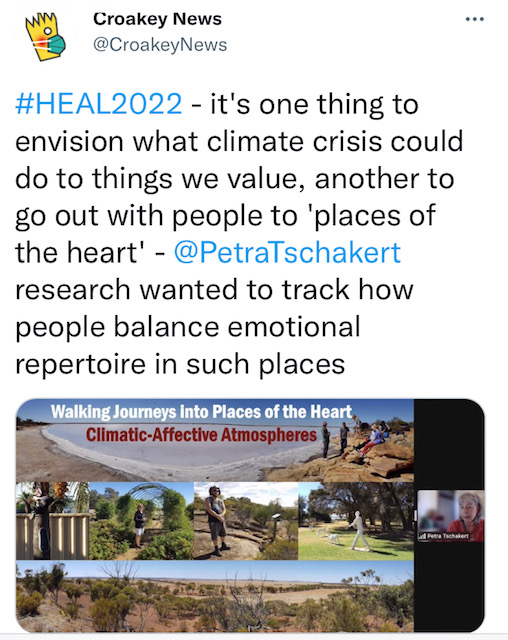 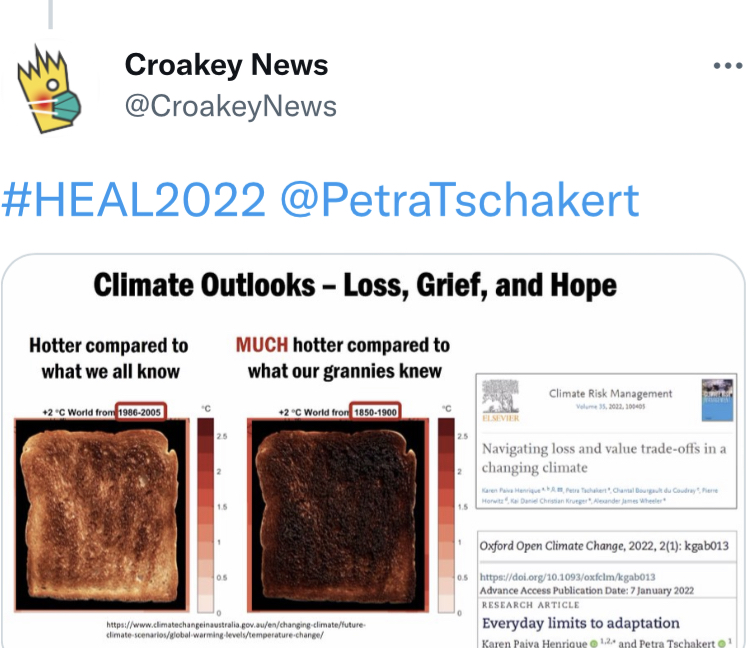 Researchers traced a whole range of emotional states that people associate with future climatic conditions and being mentally or emotionally healthy, “from hopeful, optimistic all the way to suicidal”, she said, with the large percentage of participants in the middle: “anxious, worried, feeling trapped”.

That emotional tension, Tschakert said, is fundamental for how we approach the future, finding the balance between motivation and paralysis, but looking to adaptation justice: for example, how the legacies and implications of colonisation shape non-Indigenous citizens’ valuation of Aboriginal and Torres Strait Islander priorities. 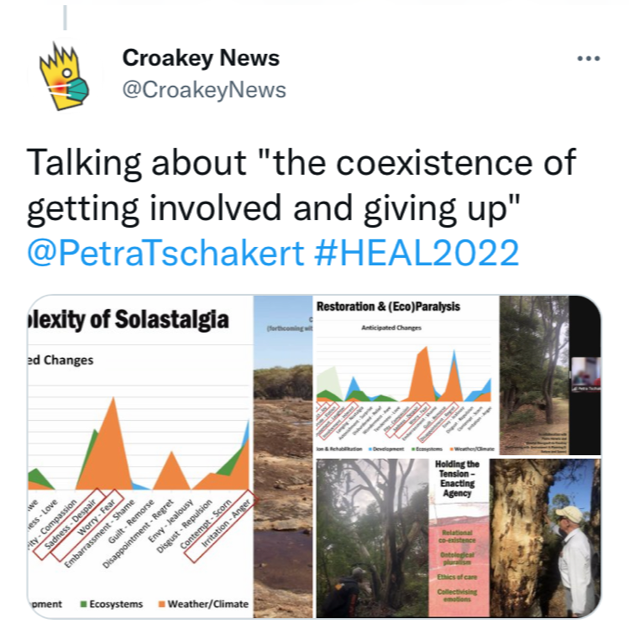 The research found that several participants were well equipped to ‘stay with trouble’.

When we are able to tap into our relational coexistence, not just with other humans but with nature, acknowledging the ontological pluralism of many beings and many ways of being, “we are better able to hold this tension between optimism, restoration and paralysis”, Tschakert said, highlighting an earlier call for building a coalition of hope on an earlier presentation by Yimardoowarra woman Professor Anne Poelina.

The next question is how to get from that individual emotional sense-making into transformational collective community change: for that, the researchers found an urgent need to “protect our most vulnerable citizens to address systematic inequalities and vulnerabilities and to show solidarity with those marginalised and to recognise the suffering of all of us”. 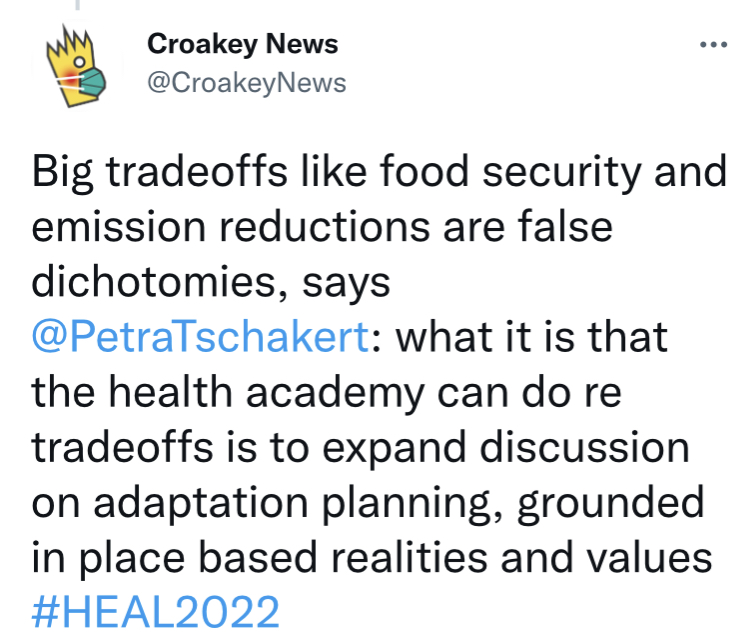 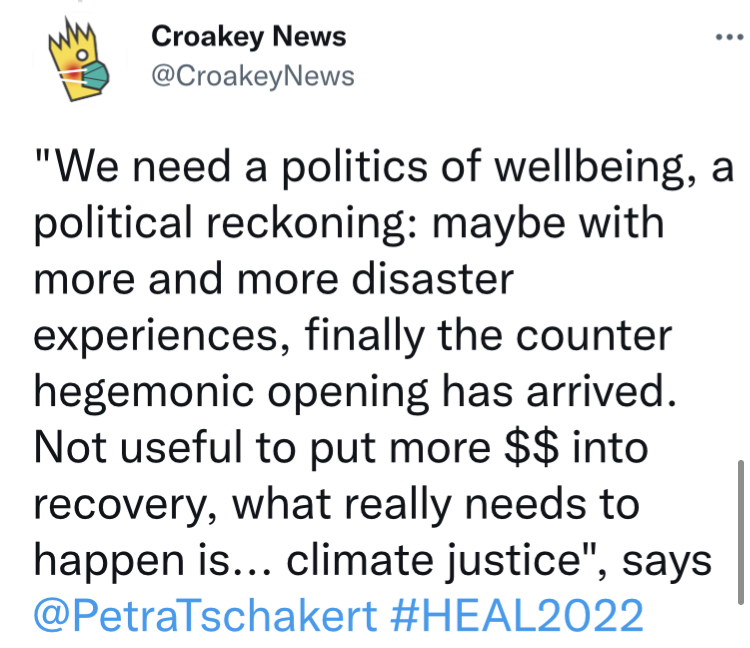 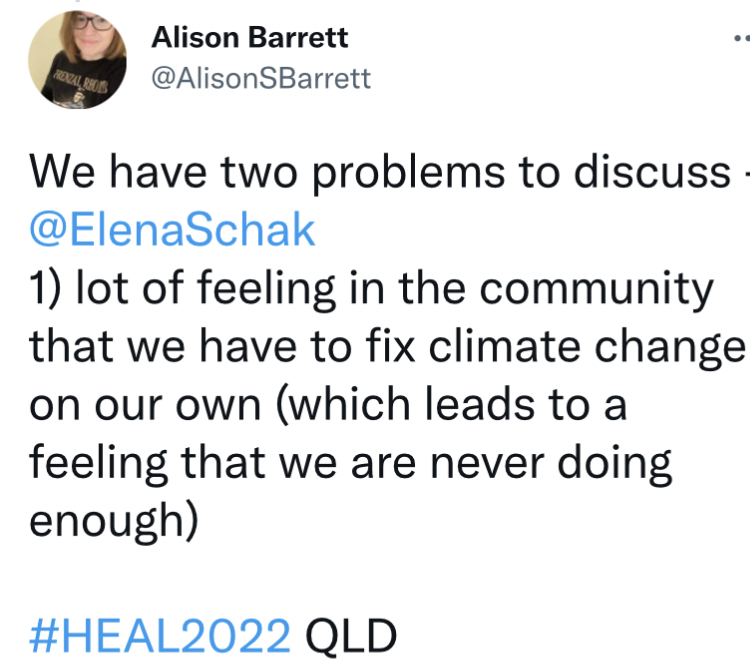 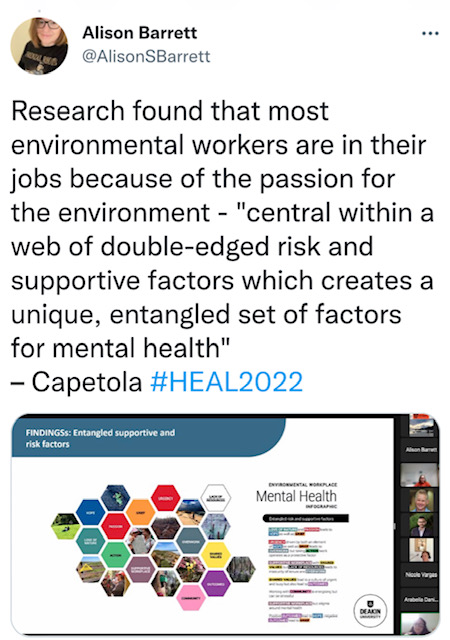 Read more about this project here.

Previous articles at Croakey from HEAL2022 can be found here, here and here.