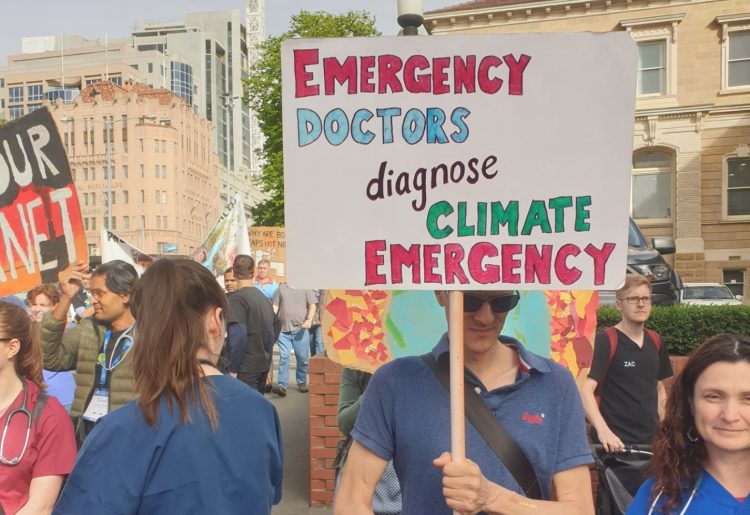 The Australasian College for Emergency Medicine has signed the open letter. Here its members march in nipaluna/Hobart in 2019. Photograph by Amy Coopes

Introduction by Croakey: Sixty health and medical organisations – including Indigenous health groups, service providers, the Australasian College of Health Service Management, the HESTA Super Fund and the Australian Society for Medical Research – have signed an open letter to the Prime Minister urging climate action for health.

The letter, published below with a list of signatories, comes as the Morrison Government announces that it will establish a National Recovery and Resilience Agency, to be led by Former Liberal Party President Shane Stone. The agency will combine the former National Drought and North Queensland Flood Response and Recovery Agency and the National Bushfire Recovery Agency.

The Government will also establish an Australian Climate Service, a collaboration between the Bureau of Meteorology, the CSIRO, ABS and Geoscience Australiam to bring together critical data for informing emergency responses and long-term planning for infrastructure, housing and basic services like power, telecommunications, and water.

Minister for the Environment Sussan Ley said in the media statement that: “We do face more extreme weather events due to changing climate and this is about being prepared, and being able to take steps to make our communities more resilient.”

We write to you as a coalition of climate concerned health organisations in Australia that wish to see the threat to health from climate change addressed by the Australian Government.

Climate change is described by the World Health Organization as “the greatest threat to global health in the 21st century.” Yet, climate action could be the greatest public health opportunity to prevent premature deaths, address climate and health inequity, slow down or reverse a decrease in life expectancy, and unlock substantial health and economic co-benefits.

To ensure that the health of all Australians is protected from the threat of climate change, we call on the Australian Government to:

1.    Prioritise health in the context of Australia’s Nationally Determined Contribution to the Paris Agreement

A stable climate is a fundamental determinant of health and the aim to limit warming to 1.5°C is a critically important public health goal. The current emissions reductions target set by Australia is not sufficient to keep warming to 2°C. This threatens the health of Australians, and people around the world. Significantly increasing ambition by Australia in its Nationally Determined Contribution under the Paris Agreement is needed to have a chance of avoiding the further disastrous health, economic, and environmental impacts of climate change. This would best be achieved by the creation of a body that will appropriately prioritise the setting of targets to meet those agreed to under the Paris Agreement.

2.     Commit to the decarbonisation of the healthcare sector by 2040, and to the establishment of an Australian Sustainable Healthcare Unit

The health sector is responsible for 7% of Australia’s greenhouse gas emissions. Achieving net-zero healthcare will significantly contribute to emissions reductions in Australia and will lead to economic and health co-benefits. A target of net-zero emissions by 2040 for healthcare in Australia, with an interim emissions reduction target of 80% by 2030, is in line with similar commitments by the National Health Service in the United Kingdom – and is broadly consistent with the goal of limiting global temperature rise to  1.5°C. Establishing an Australian Sustainable Healthcare Unit in the Australian Government Department of Health is necessary to ensure standardised and consistent  measurement of health sector emissions, mapping evidence-based approaches to emissions reductions, and achieving nation-wide health sector outcomes.

3.    Implement a National Strategy on Climate, Health and Wellbeing for Australia

A key recommendation from the 2020 Lancet Countdown on Health and Climate Change  Policy Brief for Australia is the implementation of a national climate change and health strategy. A Framework for a National Strategy on Climate, Health and Wellbeing has already been developed as guidance by the health sector and health experts, and is supported by more than 50 health organisations.

By implementing the systematic and ambitious actions on climate change and health  described above, the Australian Government will demonstrate its commitment to the health and wellbeing of Australians, the economy, and the environment. This will deliver a decrease in climate change associated morbidity and mortality and the associated economic costs, and unlock substantial benefits from a healthier and more prosperous society.

See previous Croakey articles on the climate crisis and health.

PrevPreviousVaccine inequity across the globe: “Our racism is dangerous for our own health, too”
NextPrison is no place for a child: health, justice groups slam NT youth justice reformsNext