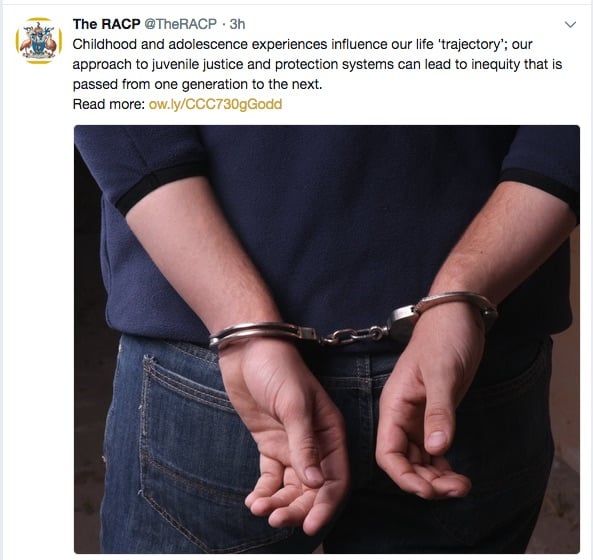 Health and medical groups are backing a push for federal, state and territory governments to prioritise youth justice reform nationally in the wake of the Royal Commission into the Protection and Detention of Children in the Northern Territory.

The Royal Australasian College of Physicians (RACP) today issued a statement calling for jurisdictions to work together to ensure a strong and sustained commitment to working with Indigenous communities to implement the Royal Commission’s recommendations.

Throughout the Royal Commission’s investigations, we have heard many heartbreaking stories of cruel and inhumane acts of abuse. We know that these acts did not occur in isolation in the Territory’s juvenile justice facilities but happened across Australia more generally.

We strongly believe other State and Territory governments through the Council of Australian Governments (COAG) must now work together and ensure the Royal Commission’s recommendations are acted on to improve the country’s approach to juvenile justice.

We also believe that working in close partnership with Aboriginal and Torres Strait Islander people and their representative bodies, will be crucial to successfully implementing the Commission’s recommendations.”

Dr Robert Tait, an RACP Fellow and specialist paediatrician at Royal Darwin Hospital, said there was still plenty of work to do in responding to victims of historical abuse and improving health outcomes for young people in the current system. He said:

The evidence shows childhood and adolescence experiences influence our life ‘trajectory’ and can result in adverse health, educational and vocational outcomes into adult life, with increased subsequent mortality and morbidity.

This path can lead to inequity that is passed from one generation to the next.”

Tait urged the NT Government to consider a greater investment in paediatric services with a stronger focus on preventative strategies.

The current juvenile justice system in the Northern Territory and most likely those in other states and territories teaches children that as an adult you can do what you like. That the rules don’t apply. It teaches these children that power through violence is ok.

And what is that price these kids and society pay? The price is recidivism, poor education, low self-efficacy, trauma after trauma.

We are creating adults who are not prepared for anything but incarceration. By not investing in their future we are breaking them before they have had a chance to succeed.”

The Royal Australasian College of Physicians and other health and medical groups are among 100 organisations to have signed an open letter published by the Change the Record coalition calling for national action.

The letter has been forwarded to the Prime Minister’s office, so the call for signatories is closed, but Change the Record suggests that Croakey readers can sign this petition by some of their member organisations calling for a national youth justice action plan:

(The open letter below is re-published with permission from Change the Record.)

Open Letter to the Prime Minister, Premiers and Chief Ministers: Ensure national action on the Report of the Royal Commission into the Protection and Detention of Children in the Northern Territory

We note the report of the United Nations Special Rapporteur on the Rights of Indigenous Peoples, Ms Victoria Tauli-Corpuz, following her visit to Australia in March 2017 who found “the routine detention of young indigenous children the most distressing aspect of [her] visit.”

We note that this abuse is not isolated to the Northern Territory. Throughout the past 18 months there have been independent Inquiries into youth detention in every jurisdiction except South Australia.

In addition to removing children from their families and communities, children are being subjected to prolonged abuse including isolation, restraint chairs, spit hoods and tear gas in youth prisons.

All Australian governments must take immediate measures to reform our youth justice systems and address the recommendations of the Royal Commission. These must be developed collaboratively with Aboriginal and Torres Strait Islander people and communities to ensure that all of Australia’s children thrive.

Signed by the following organisations:

National Council of Single Mothers and their Children

Save the Children Australia

SNAICC – National Voice for Our Children

The Bridge of Hope Foundation Inc.

The Royal Australasian College of Physicians

Youth Coalition of the ACT