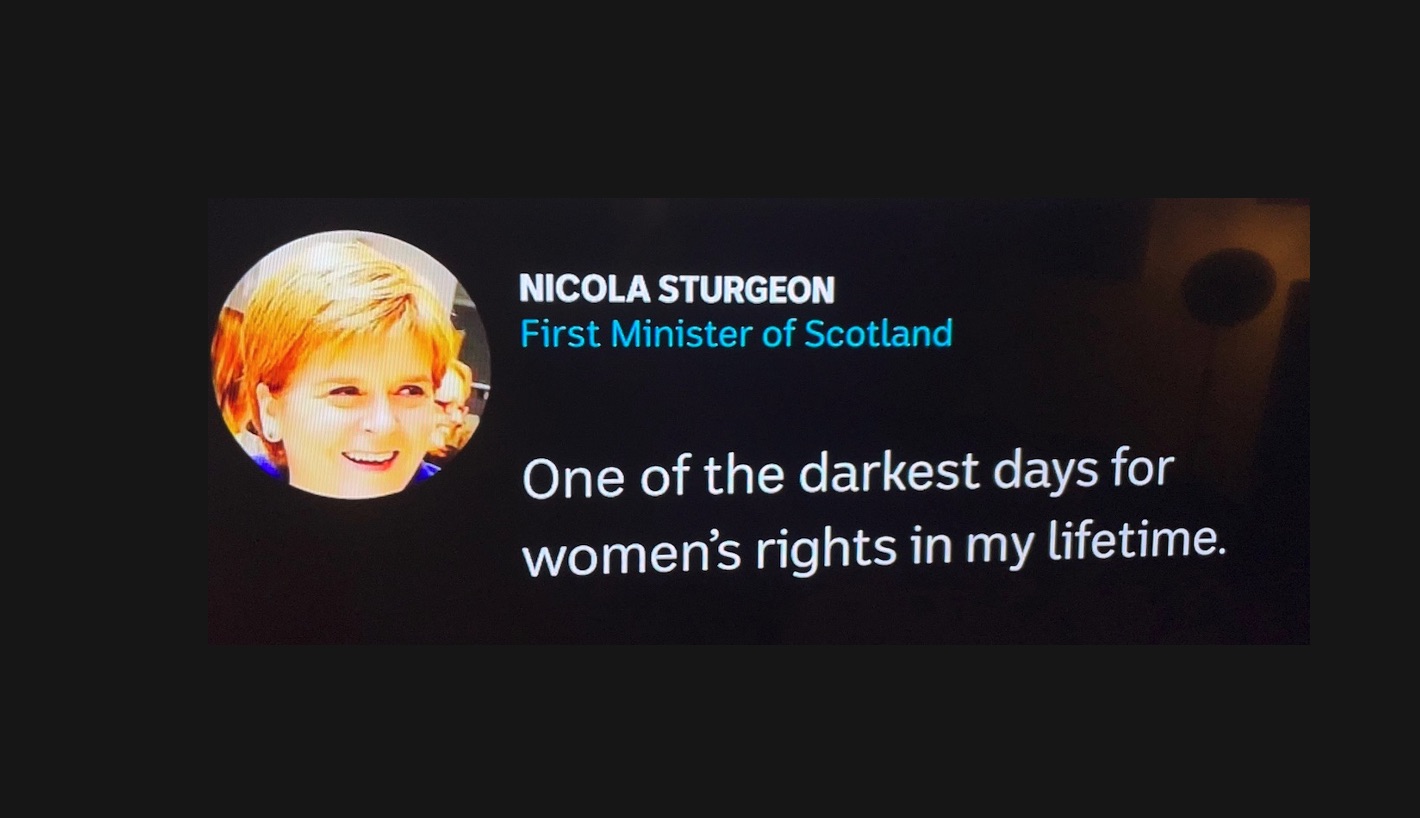 *** This article was updated on 27 June with additional commentary ***

The United States Supreme Court’s decision to reverse 50 years of constitutional protection for the right to have an abortion is an attack on the lives, rights and health of women and girls and will have wide-ranging repercussions, including worsening health disparities, health leaders have warned.

As well, conservative Supreme Court justices have clearly signalled their intent to revisit other landmark legal decisions, potentially winding back other human rights.

The post below wraps reaction from health organisations in the US and elsewhere, as well as some of the wider reaction. A more detailed analysis will be published by Croakey columnist Associate Professor Lesley Russell in coming days. 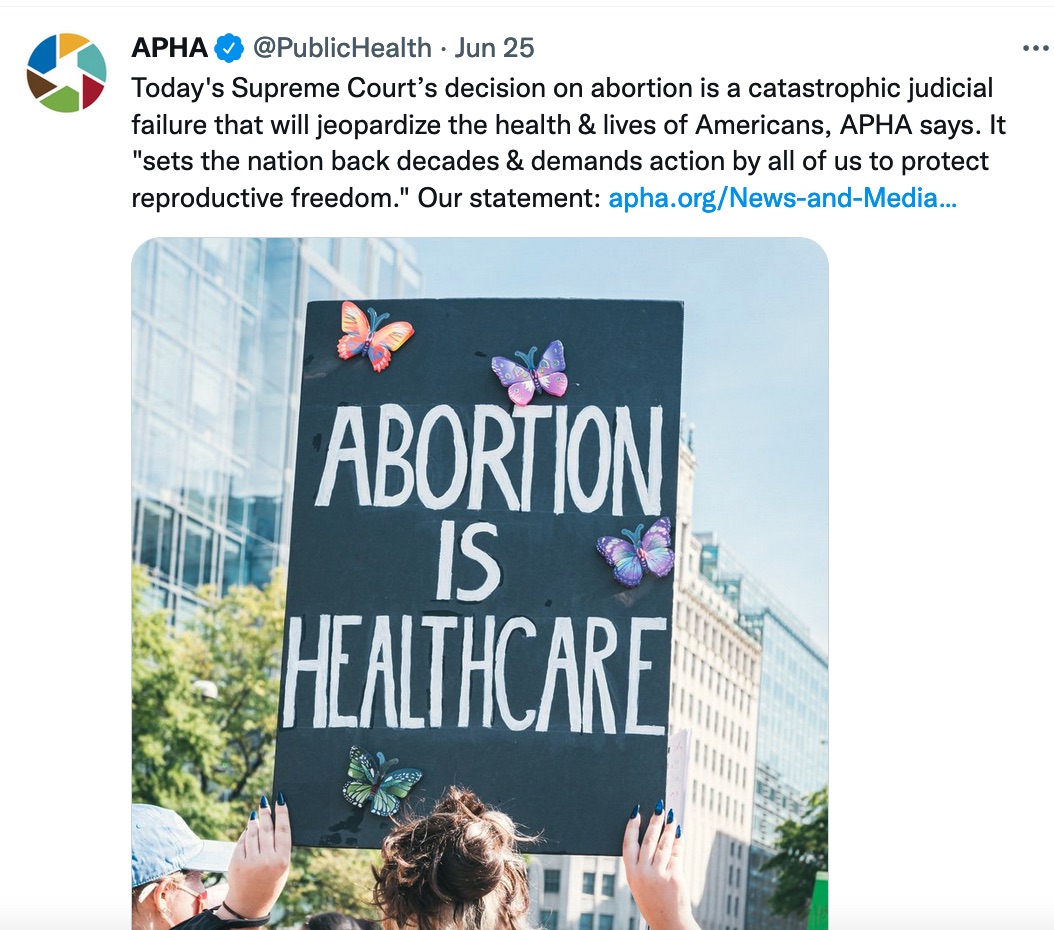 The American Public Health Association says the decision “is a catastrophic judicial failure that will reverberate differently in each state and portends to jeopardise the health and lives of all Americans”.

“APHA has long held that access to a full range of reproductive health services, including abortion, is a fundamental right. When access to abortion is denied, it further undermines the health of marginalized populations.

“Congress must immediately pass legislation to protect and advance access to abortion and reproductive justice, and remove restrictions on public funding and insurance coverage for legal abortions. States must take action to make the procedure legal for patients who seek it and abortion providers who offer the essential health care service. Further, states should fund and equip their public health departments to help people obtain comprehensive reproductive health services consistent with public health values and frameworks.

“The Supreme Court decision sets the nation back decades and demands action by all of us to protect reproductive freedom for all. A public health strategy to achieve health in all policies, economic equality, social justice and human rights should protect and advance access to abortions and reproductive justice.” 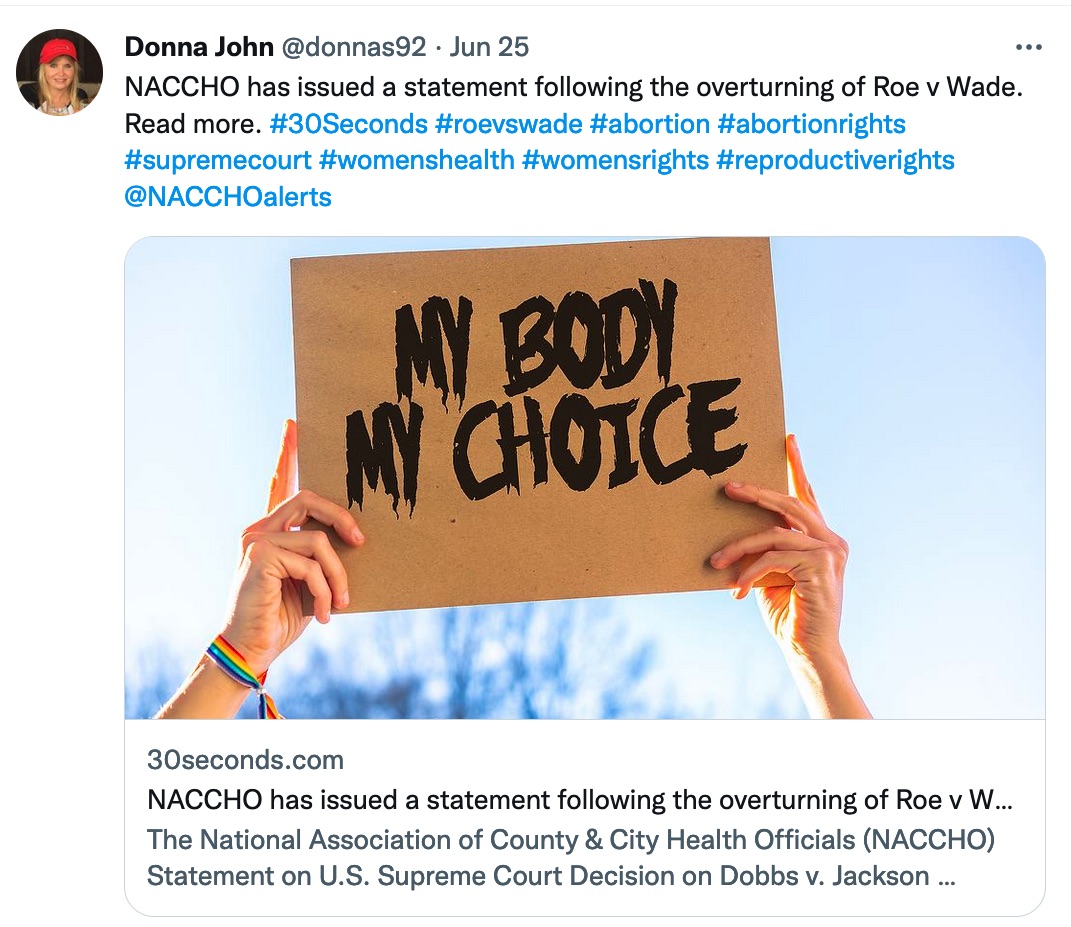 The National Association of County & City Health Officials (NACCHO) statement says it is estimated that 26 states and 58 percent of people of reproductive age will lose access to comprehensive reproductive health services.

The NACCHO statement says: “The United States is facing a maternal and infant health crisis, with the number of maternal health deaths steadily rising since 1987, when this data was first collected. Black maternal mortality is three times higher than those of white counterparts due to structural racism, lack of access to high-quality medical care and medical implicit bias. 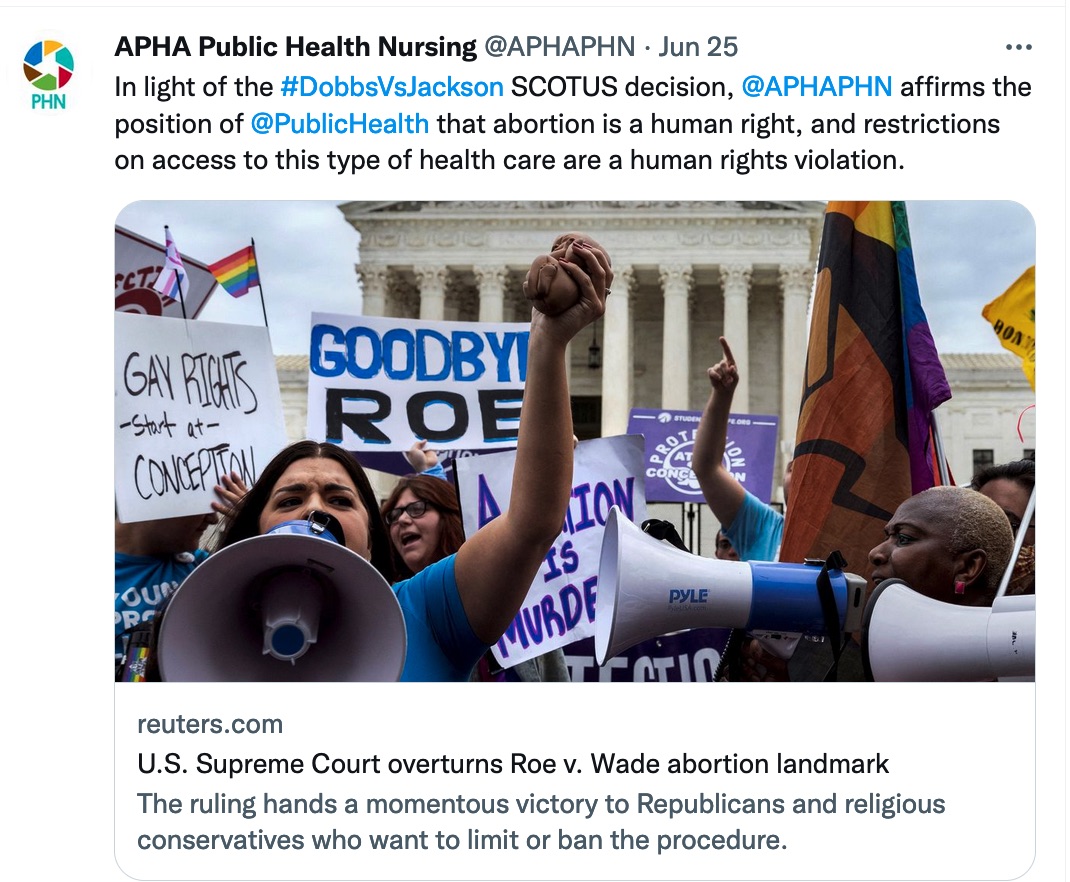 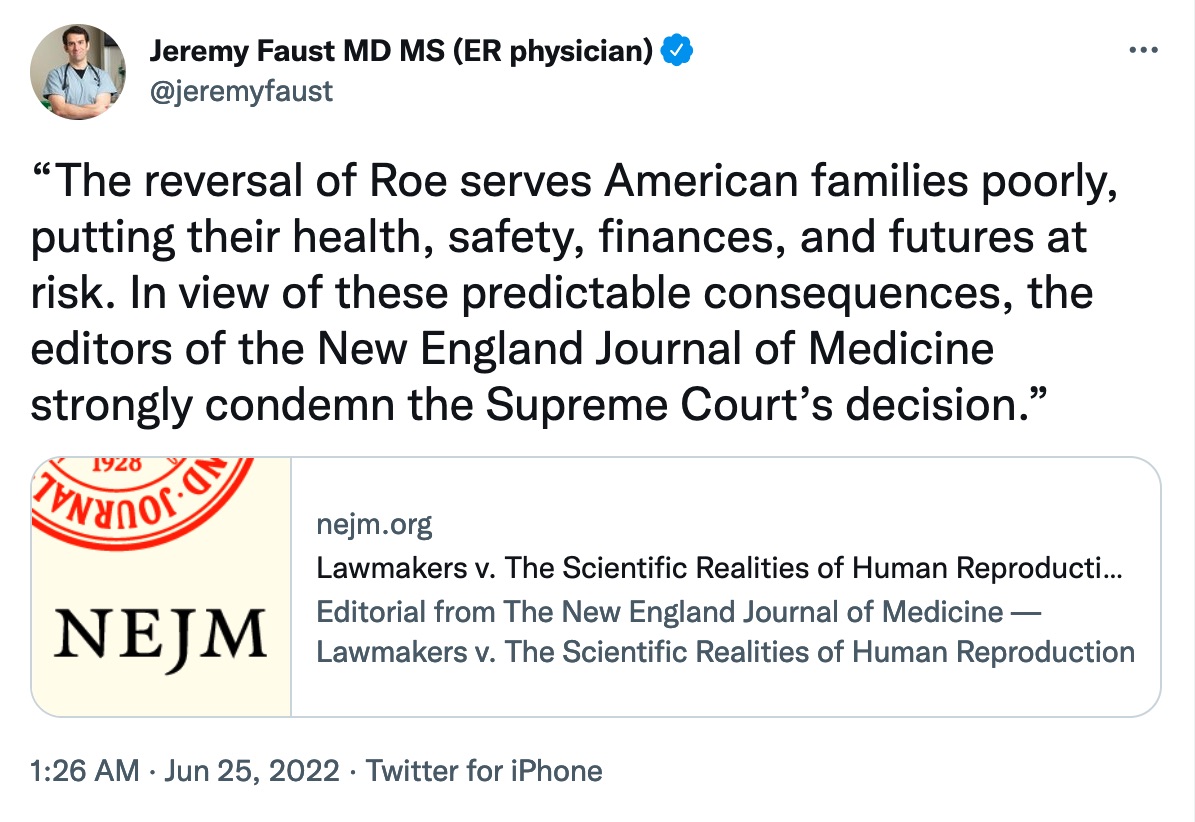 The editors of The New England Journal of Medicine said: “Experience around the world has demonstrated that restricting access to legal abortion care does not substantially reduce the number of procedures, but it dramatically reduces the number of safe procedures, resulting in increased morbidity and mortality. Millions of persons in states lacking protections for abortion care are also likely to be denied access to medication-induced abortions.

“It may be difficult for many Americans in 2022 to fully appreciate how complicated, stressful, and expensive, if even attainable, their most private and intimate decisions will become, now that Roe has been struck down. A recent New York Times article recounted the experiences of women, now in their 60s and 70s, who sought abortions before Roe. They described humiliating circumstances, unsafe procedures literally performed in back alleys, and the deep shame and stigma they endured. Common complications of illegal procedures included injury to the reproductive tract requiring surgical repair, induction of infections resulting in infertility, systemic infections, organ failure, and death. We now seem destined to relearn those lessons at the expense of human lives….

“By abolishing longstanding legal protections, the U.S. Supreme Court’s reversal of Roe v. Wade serves American families poorly, putting their health, safety, finances, and futures at risk. In view of these predictable consequences, the editors of the New England Journal of Medicine strongly condemn the US Supreme Court’s decision.” 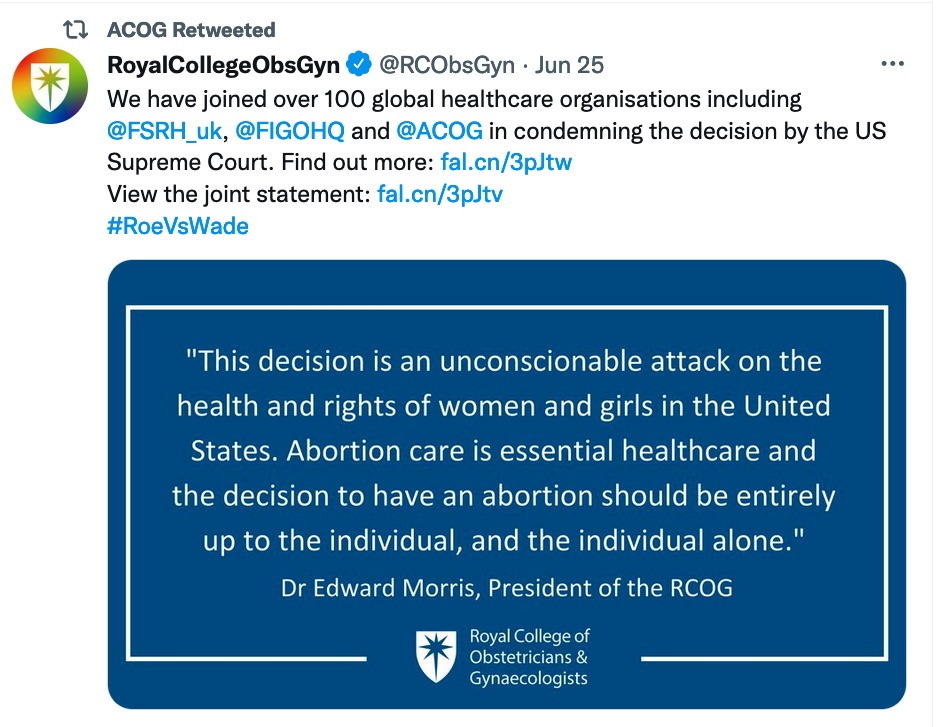 More than 100 organisations from around the world have signed a statement hosted by the International Federation of Gynecology and Obstetrics saying that the decision “is a catastrophic blow to the lives of millions of women, girls and pregnant people who now face the prospect of being forced to continue pregnancies. It is a decision that will cost lives for years to come.”

The statement says: “The US joins just a handful of countries that have actively reduced access to abortion care in recent years. This is out of step with the global community’s commitment to advance human rights and fails to take into account the overwhelming global medical evidence that supports abortion as essential health care.”

A statement by the American College of Obstetricians and Gynecologists said the decision is “a direct blow to bodily autonomy, reproductive health, patient safety and health equity in the United States”.

The statement says: “While the Supreme Court’s decision today is a significant and destructive setback, ACOG’s resolve is unwavering: we will continue to support our members, our community partners and all people in the ongoing struggle against laws and regulations that violate and interfere with the patient-physician relationship and block access to essential, evidence-based health care.” 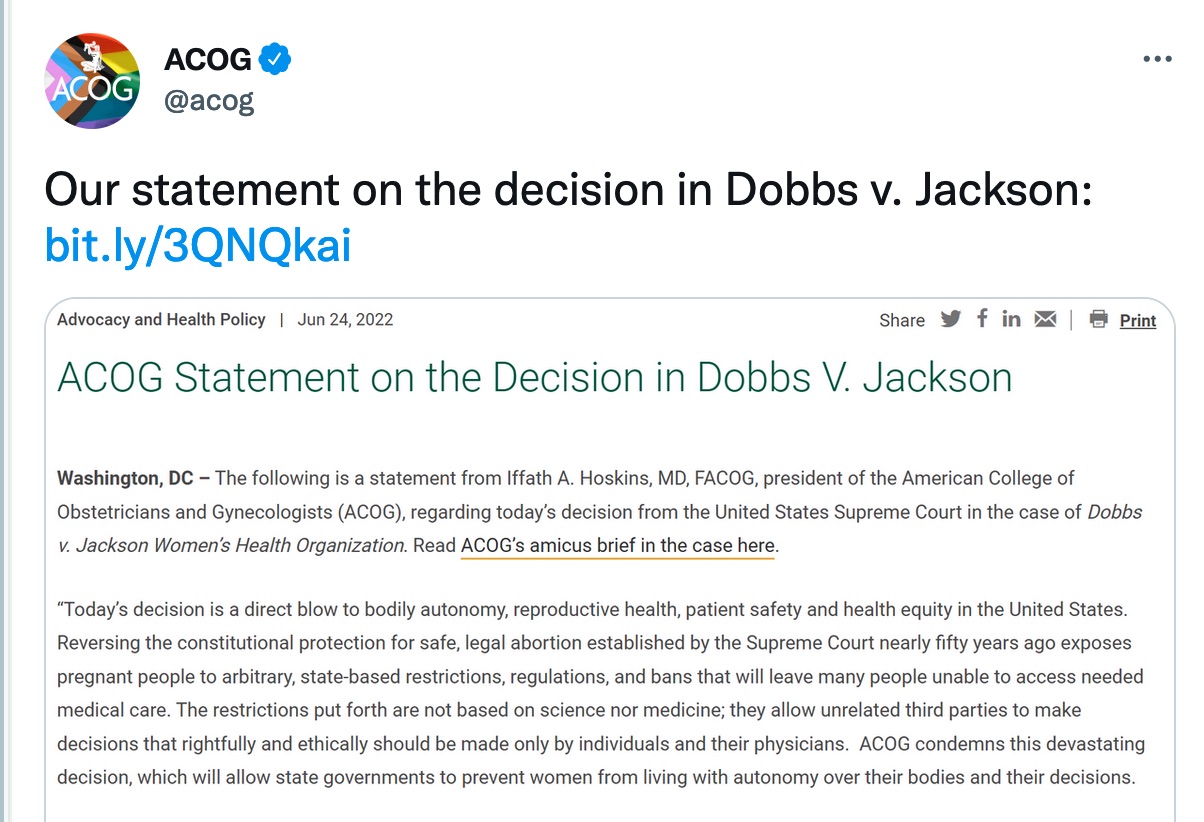 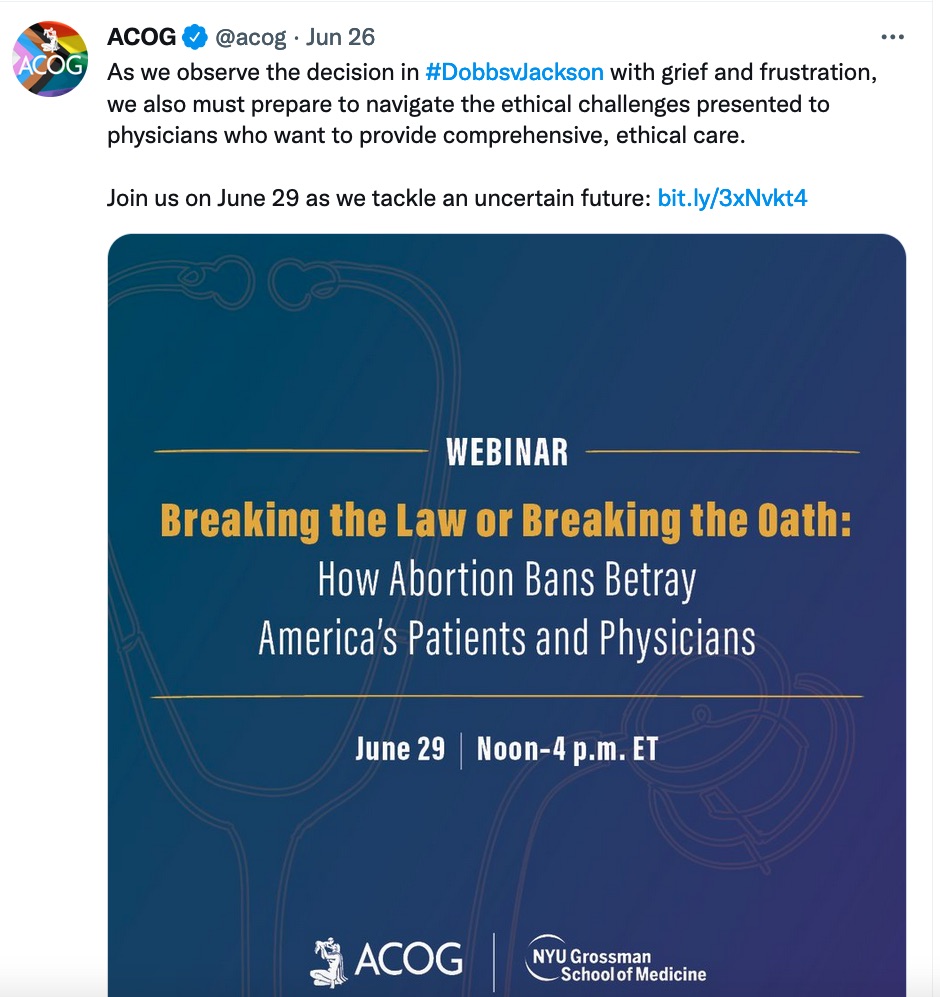 The American Academy of Pediatrics said the decision “carries grave consequences for our adolescent patients, who already face many more barriers than adults in accessing comprehensive reproductive healthcare services and abortion care”. 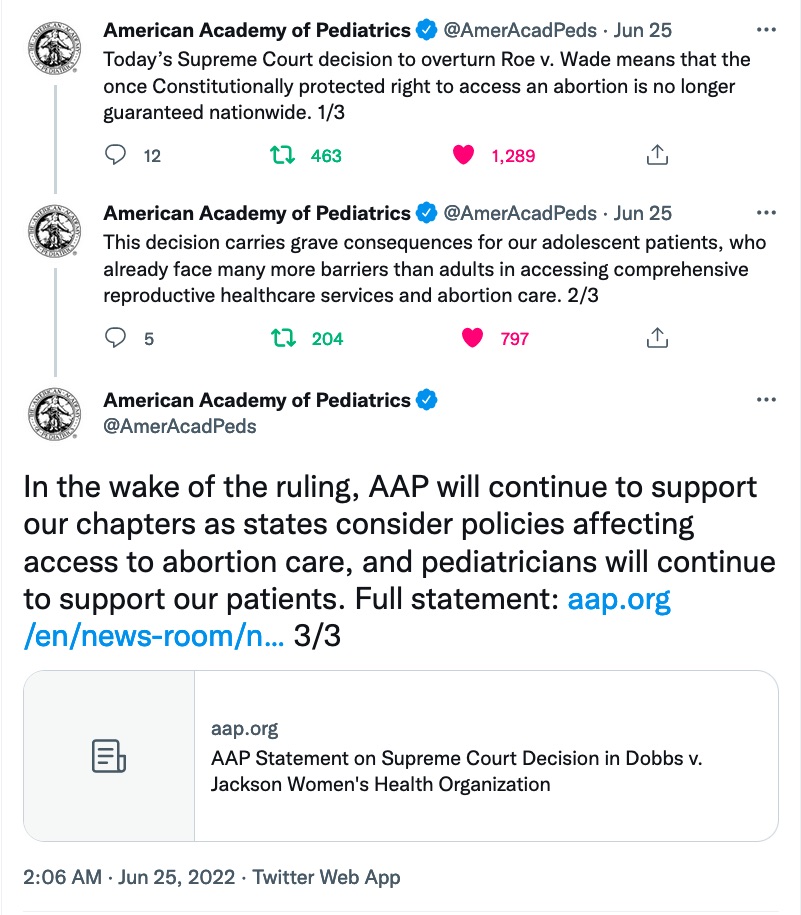 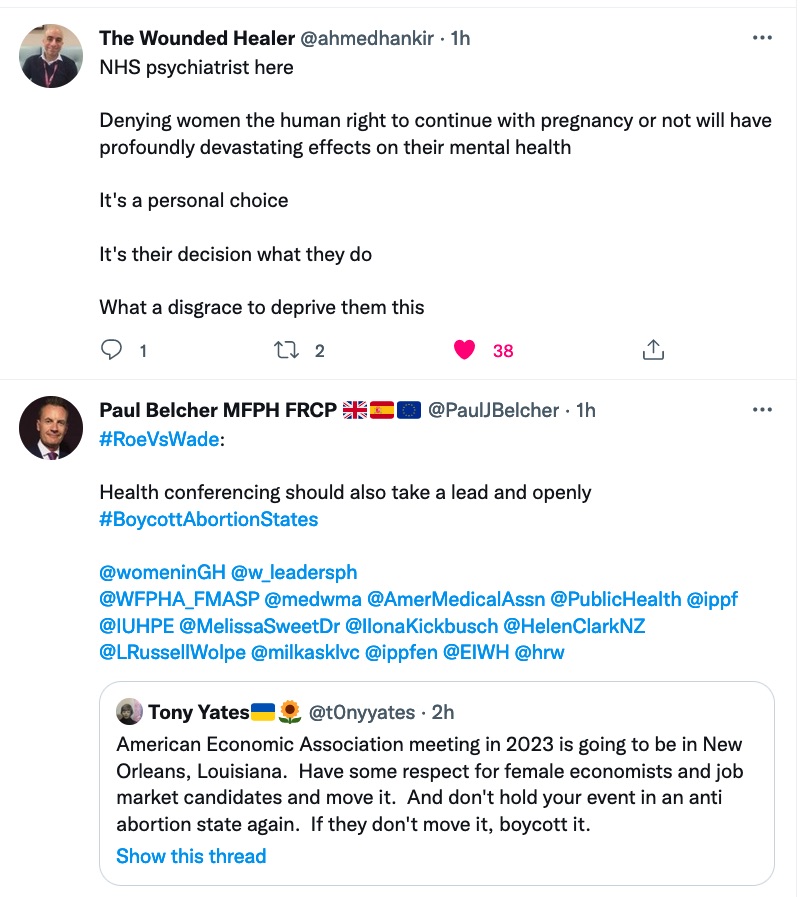 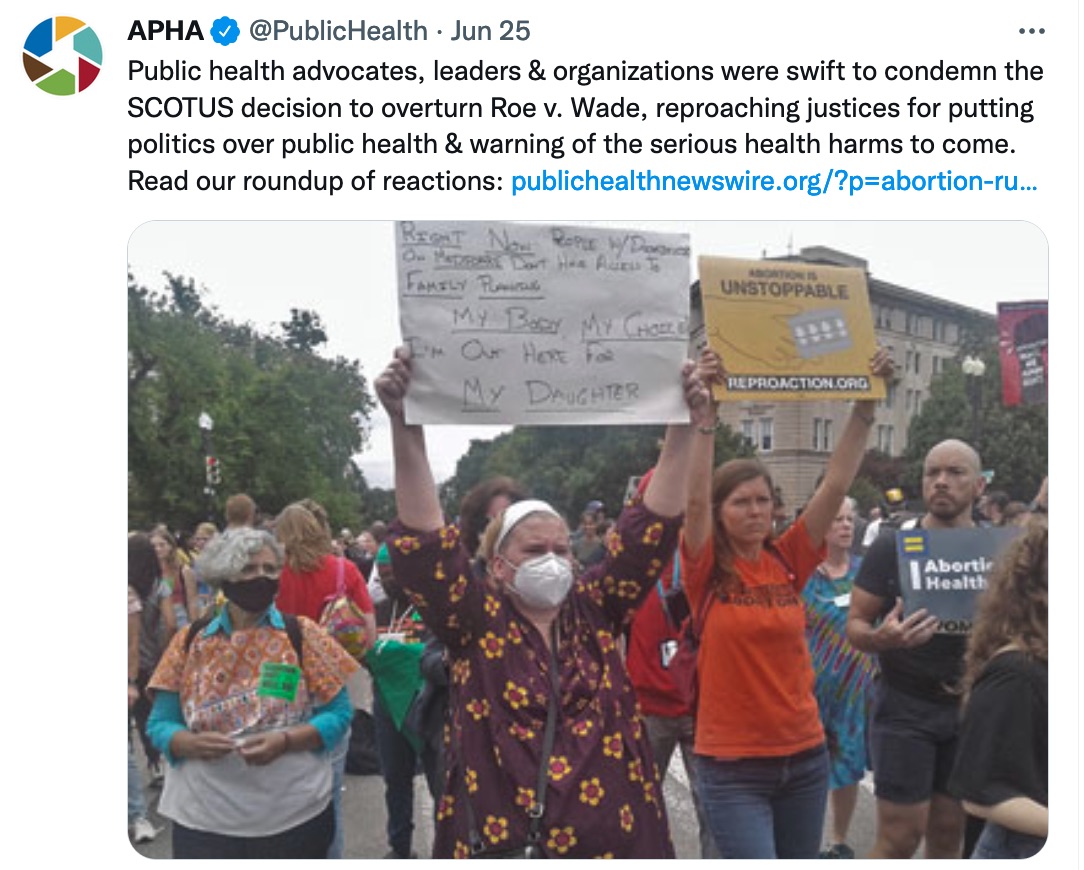 APHA Executive Director Georges Benjamin, MD
“The Supreme Court decision sets the nation back decades and demands action by all of us to protect reproductive freedom for all. A public health strategy to achieve health in all policies, economic equality, social justice and human rights should protect and advance access to abortions and reproductive justice.”

Clare Coleman, president and CEO of the National Family Planning and Reproductive Health Association
“Today’s ruling completely disregards the devastating impact banning abortion will have on the ability of millions of people, particularly women, to participate fully in society. The court has created a nightmarish reality where people will be forced to remain pregnant against their will, and the impact will be disproportionately felt by Black, Indigenous and other people of color; LGBTQ people; people with disabilities; those with no or low incomes; and young people.”

Jocelyn Frye, president, National Partnership for Women and Families
“Today’s reversal is the latest installment of a coordinated, nationwide campaign to roll back the civil rights and human rights that generations of activists gave their blood, tears and sacrifice to win. The overturning of Roe imperils the right to privacy, which also protects access to birth control and the ability of all Americans to marry the person they truly love. At the same time, many of the same states enacting extreme abortion bans across our country continue to simultaneously enact laws that make it harder for people to exercise their fundamental right to vote.”

Joni Madison, interim president, Human Rights Campaign
“When the Supreme Court is willing to throw 50 years of precedent out the window, it proves that we are at an exceedingly dangerous, unprecedented moment…It shows that all of our rights are on the line right now, as state lawmakers will be further emboldened to test the limits of our hard-won civil rights. Women are under attack, LGBTQ+ people are under attack, BIPOC people are under attack, and we are justifiably outraged. We cannot relent – we must fight back.”

American Cancer Society
“As some states signal a determination to define personhood at fertilisation, we are concerned about potential threats to a pregnant woman’s ability to receive rapid cancer treatment. Every patient should be able to increase their likelihood to survive cancer by having the option to start cancer therapy immediately, regardless of pregnancy status.”

Esta Soler, president and founder, Futures Without Violence
“… will cause real harm to those who are seeking an abortion who are denied access to this basic health care, with people who have experienced rape, incest and domestic violence sure to suffer greatly. By giving state lawmakers license to deny pregnant people the health care they need, the Court has denied millions the ability to decide when it is safe and when they feel ready to have a child, putting many women, trans people and children in harm’s way.”

Ryan Mire, MD, FACP, president, American College of Physicians
“The decision is particularly concerning because it has the potential to be applied much more broadly than just to abortion services. Although the majority opinion states that the decision applies only to abortion, ACP is concerned that by eroding the constitutional right to privacy, the decision has the potential to restrict the ability of patients to access contraception or fertility treatments in some states, or to threaten other constitutional privacy protections.”

Nancy Northup, president and CEO of the Center for Reproductive Rights
“Utter chaos lies ahead, as some states race to the bottom with criminal abortion bans, forcing people to travel across multiple state lines and, for those without means to travel, carry their pregnancies to term — dictating their health, lives and futures. Today’s decision will ignite a public health emergency.”

National Nurses United
“…a shameful and dangerous assault on women, other child-bearing people and families at a sweeping scale…Yet as health care providers, we know from experience that abortions will not stop. They will continue underground because they are a vital medical necessity, a basic health care service. Abortions will simply become more expensive, harder to access, and, in many cases, unsafe. Those with money and resources will continue to be able to get safe abortions, and those without will not.”

Jack Resneck Jr., MD, president, American Medical Association
“… an egregious allowance of government intrusion into the medical examination room, a direct attack on the practice of medicine and the patient-physician relationship, and a brazen violation of patients’ rights to evidence-based reproductive health services. States that end legal abortion will not end abortion – they will end safe abortion, risking devastating consequences, including patients’ lives.”

Alexis McGill Johnson, president, Planned Parenthood Action Fund
“Make no mistake — if they can take away the right to abortion, a right we’ve held for nearly 50 years, they won’t stop here: All of our freedoms are on the line. 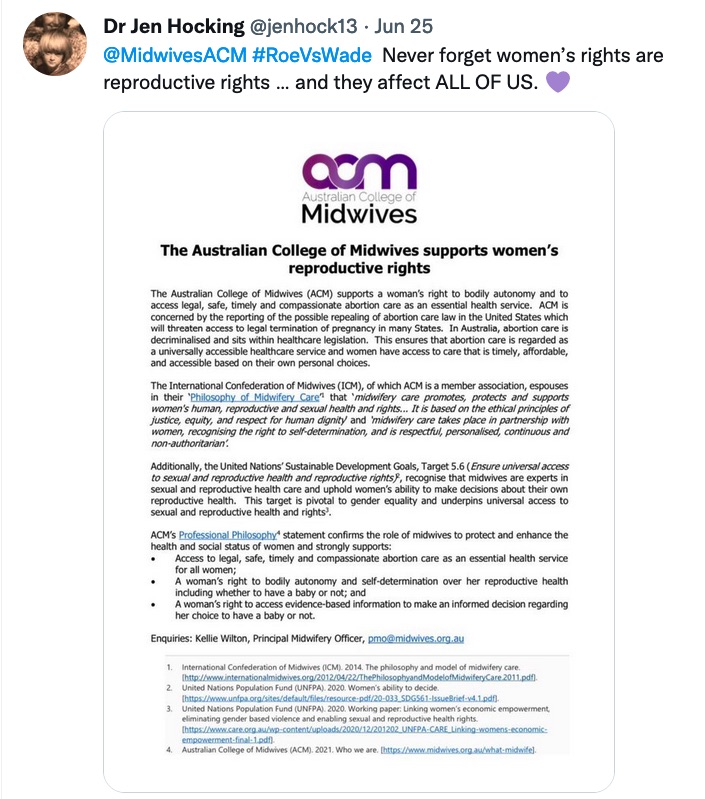 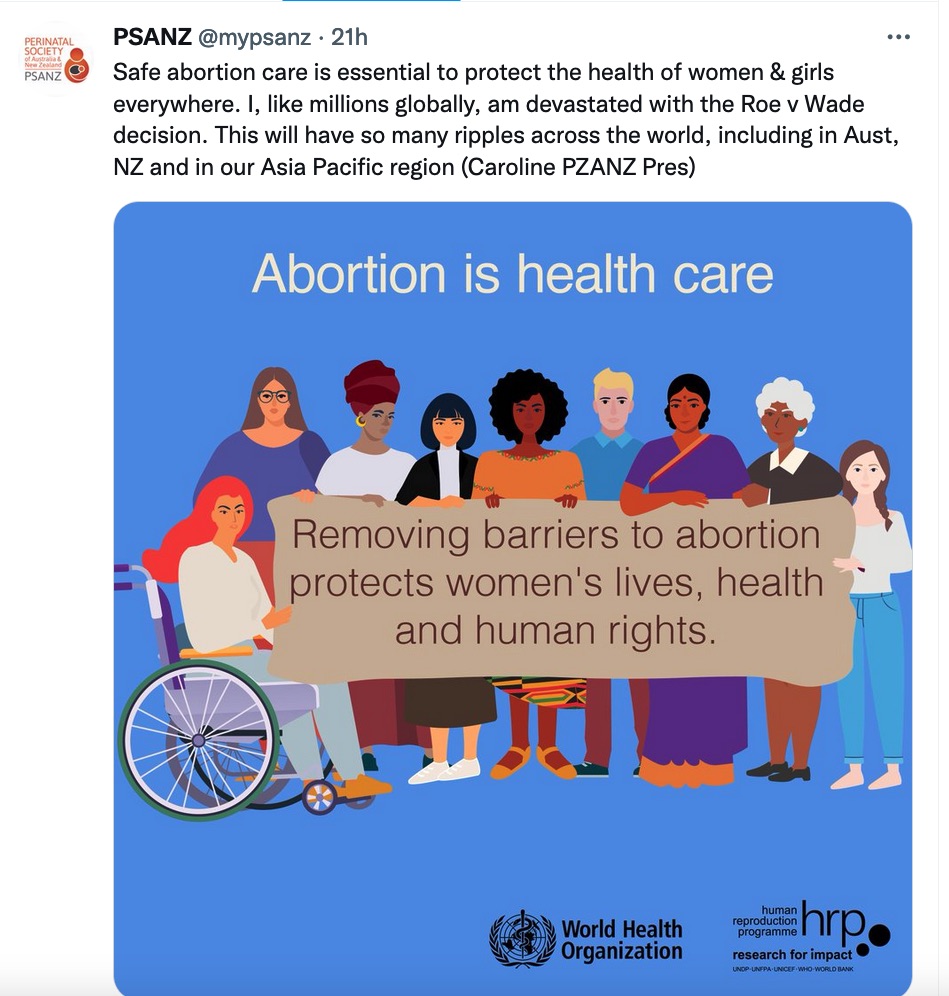 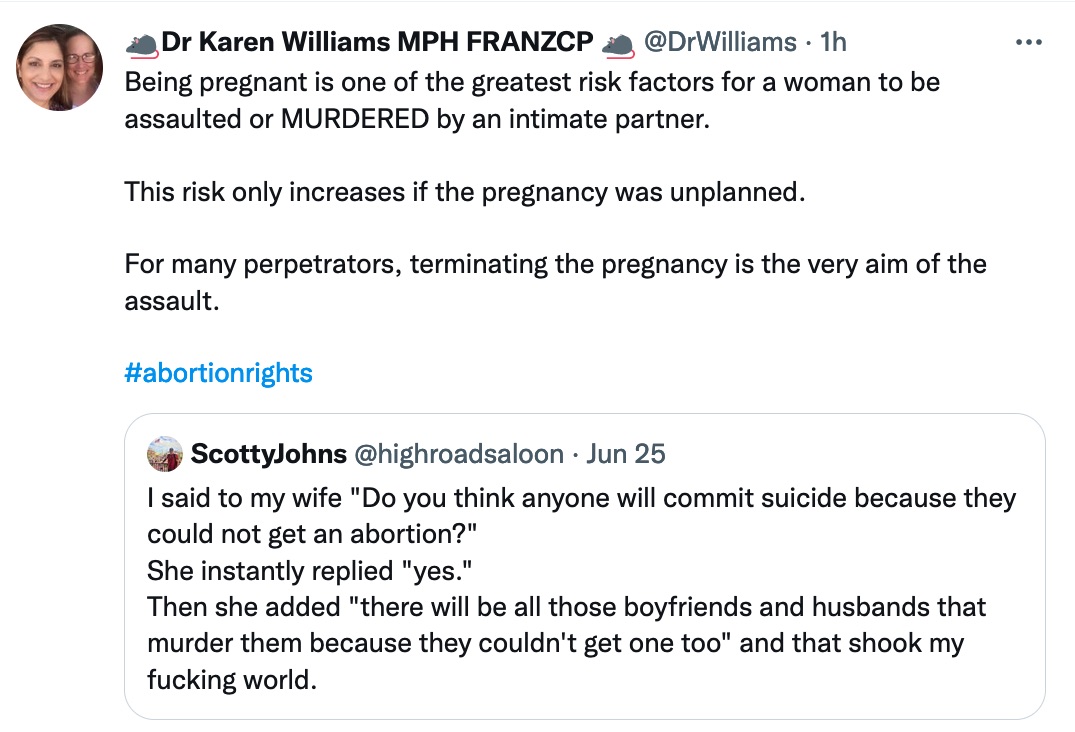 Widespread concerns have been raised about the threat of digital surveillance of women and service providers. 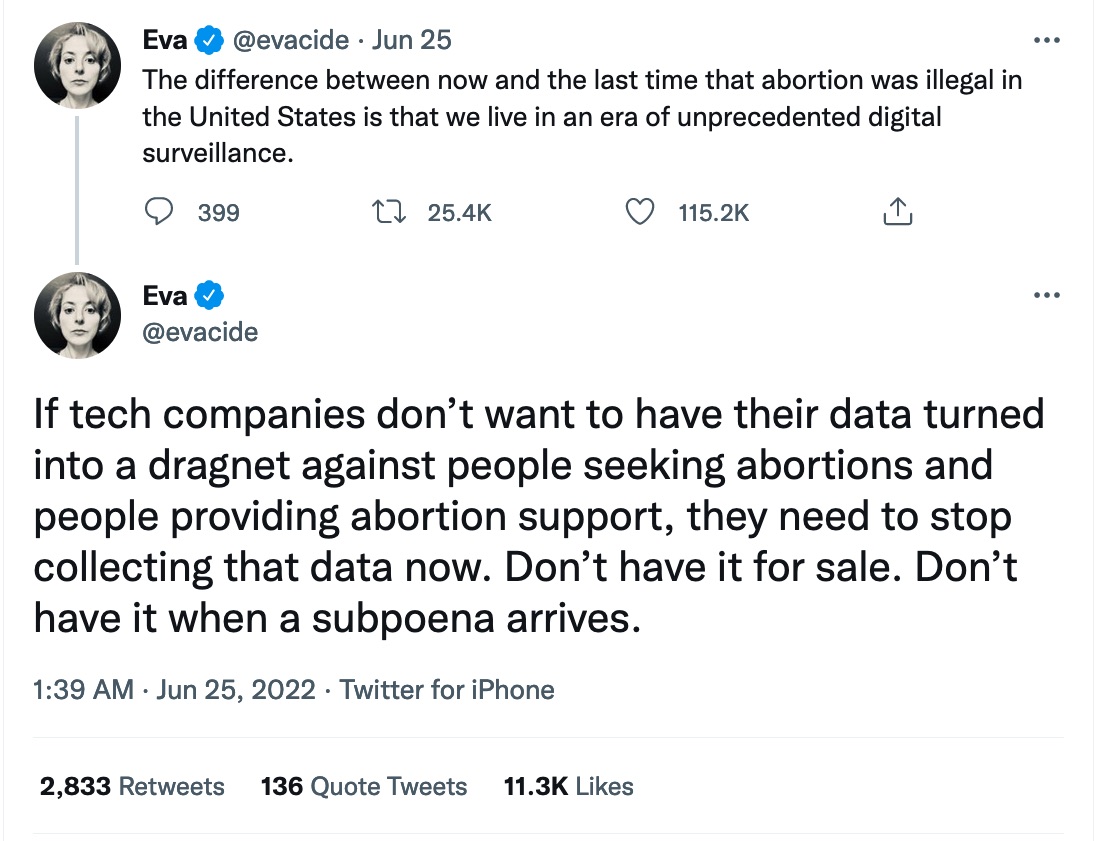 Reaction in the US 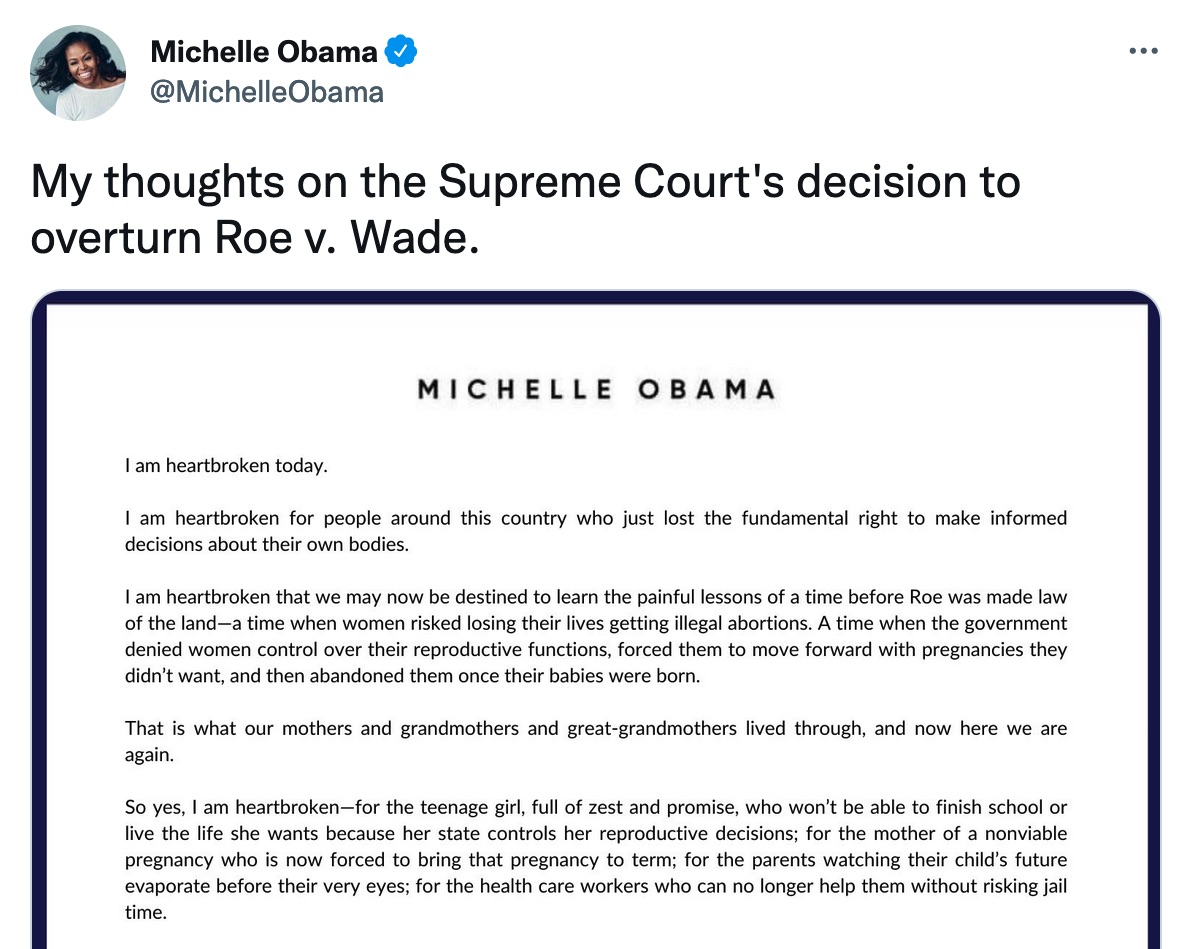 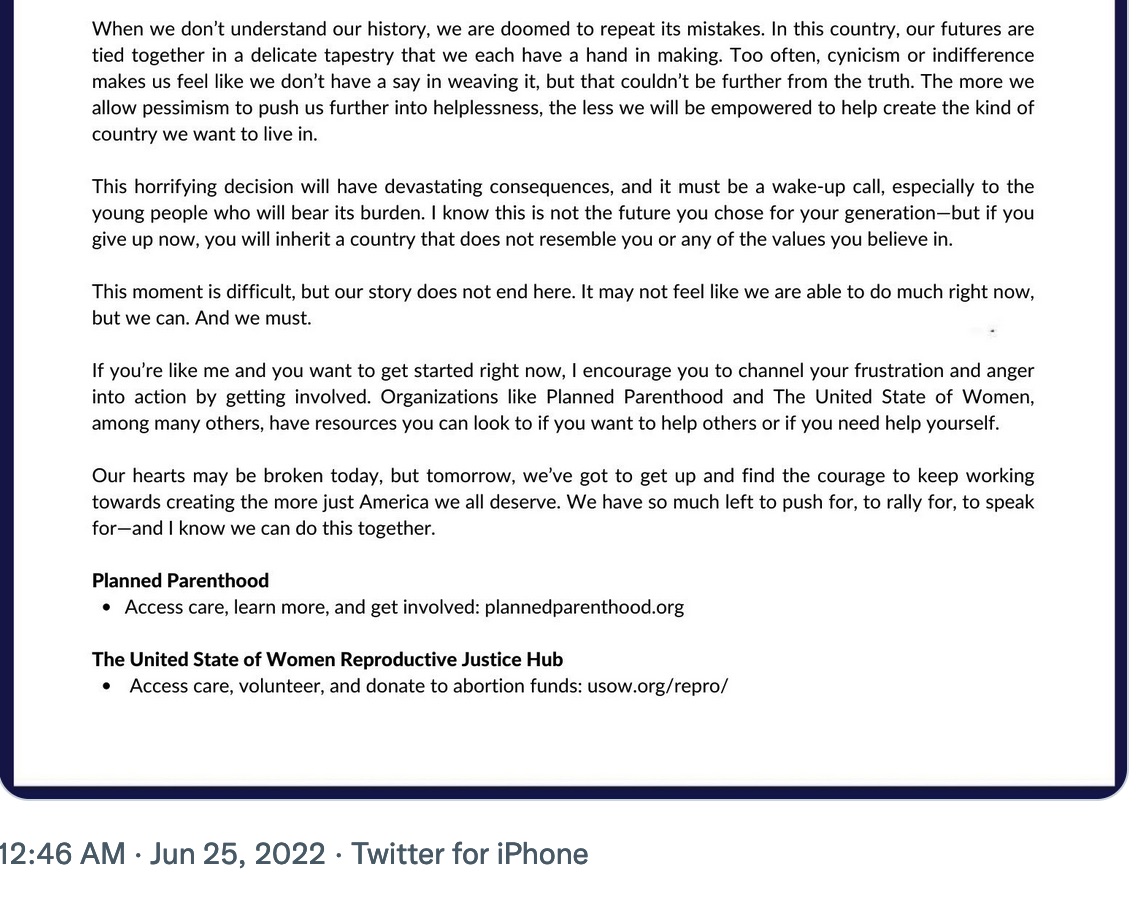 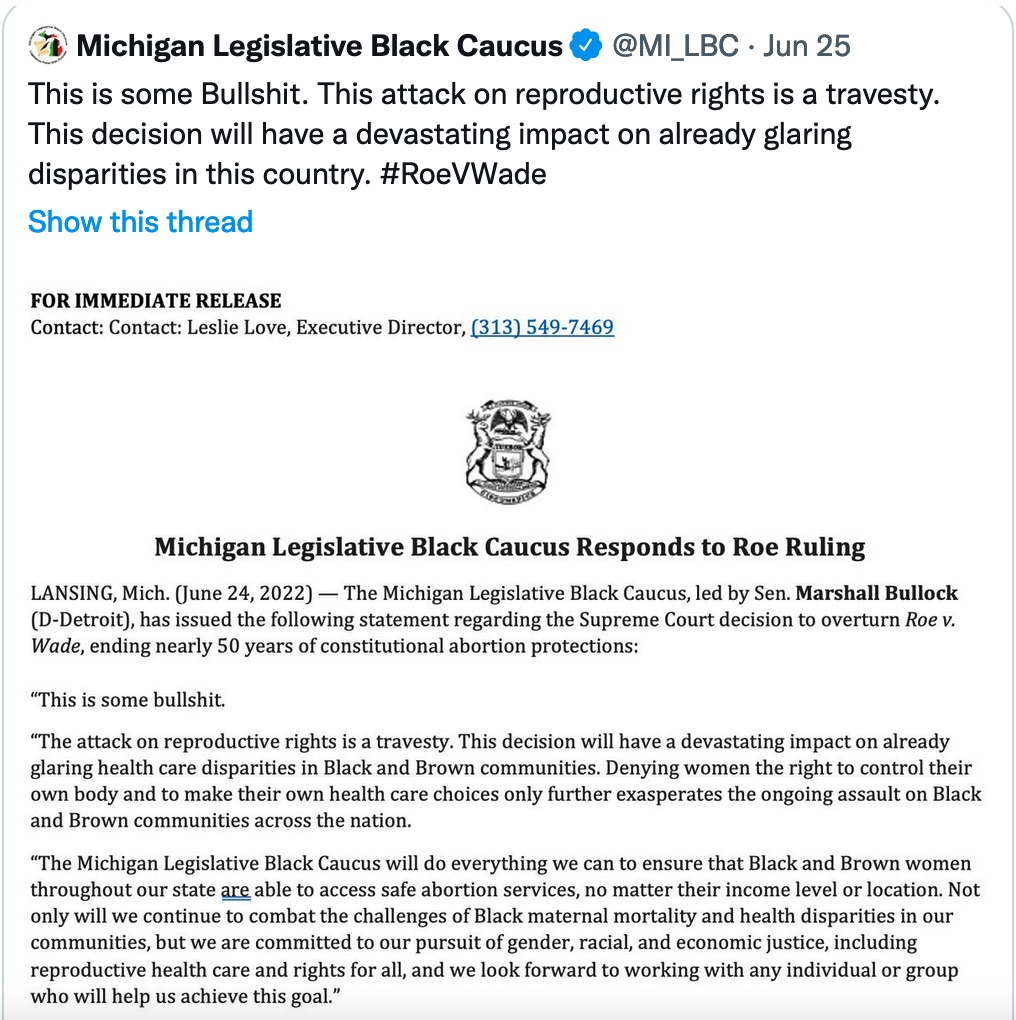 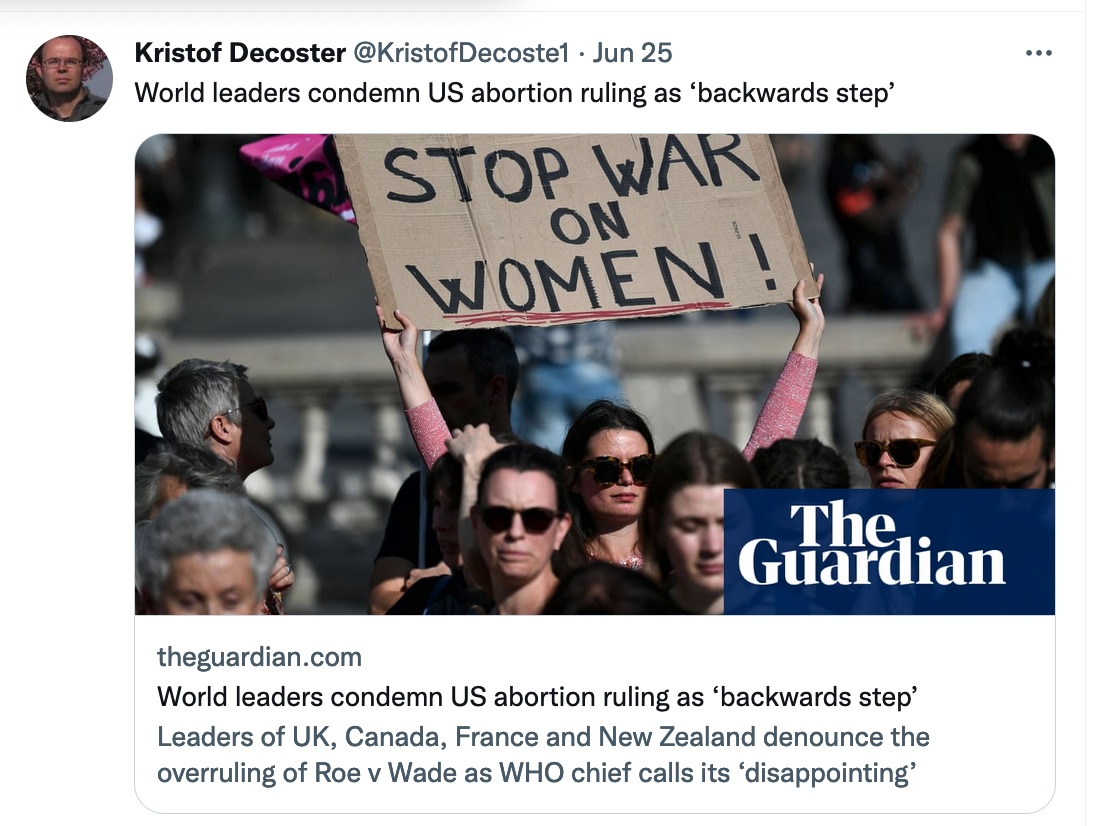 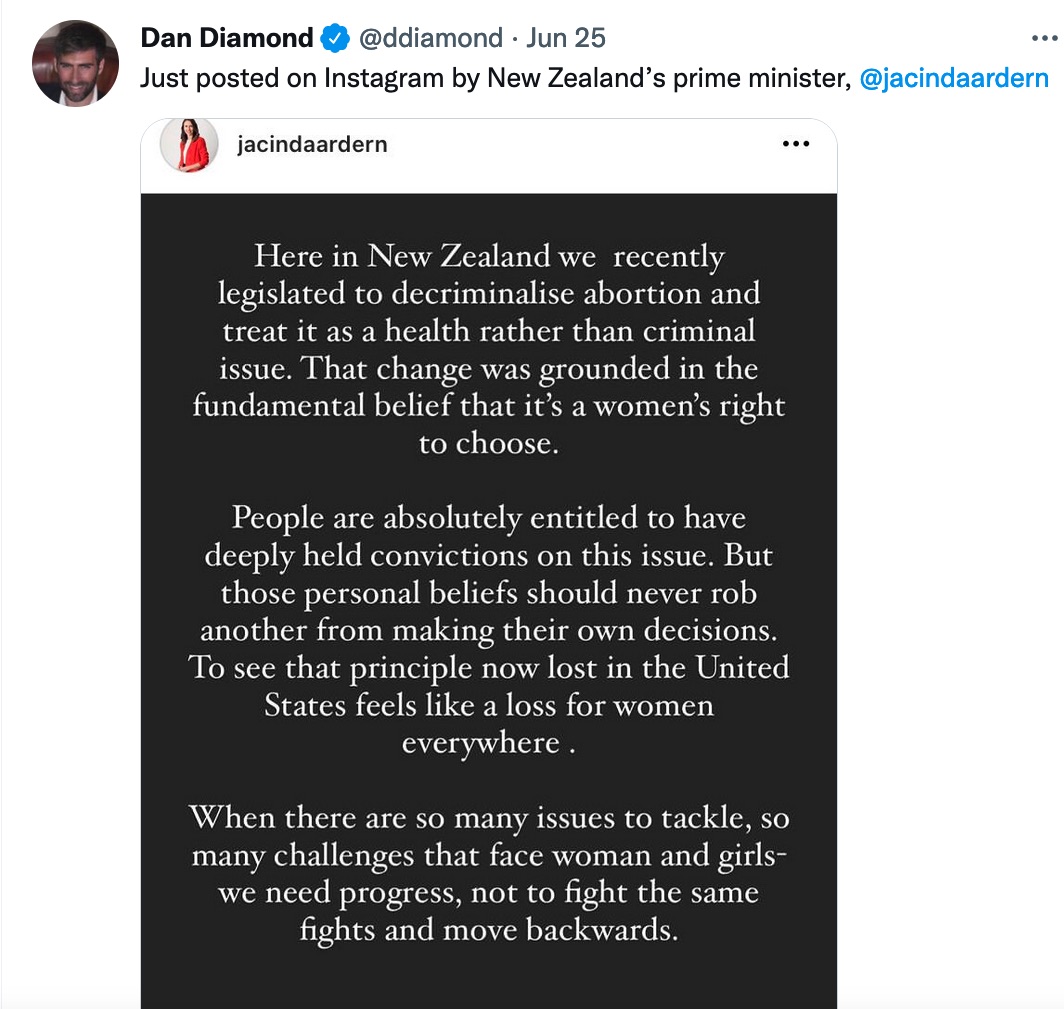 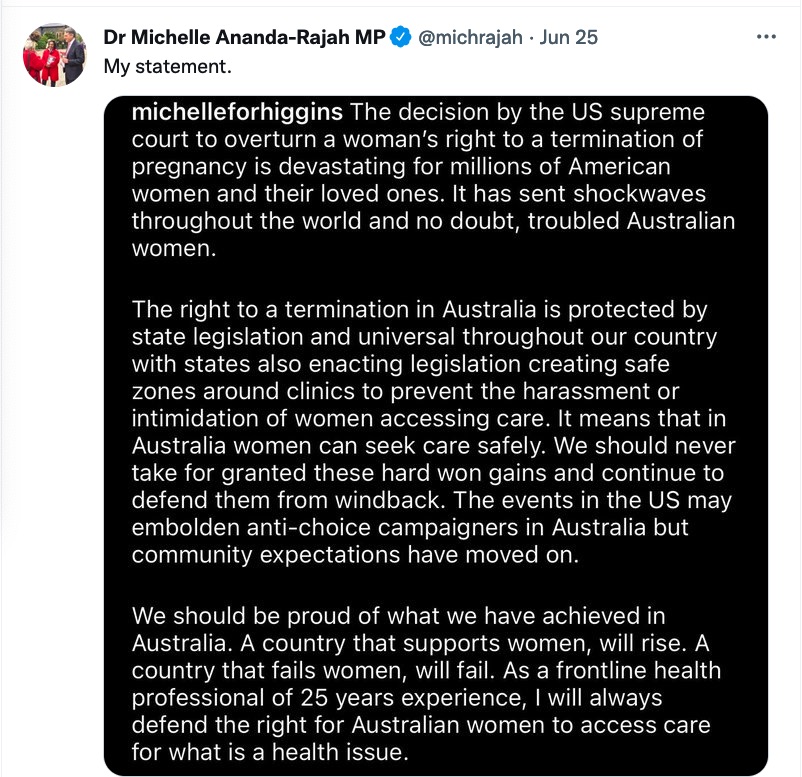 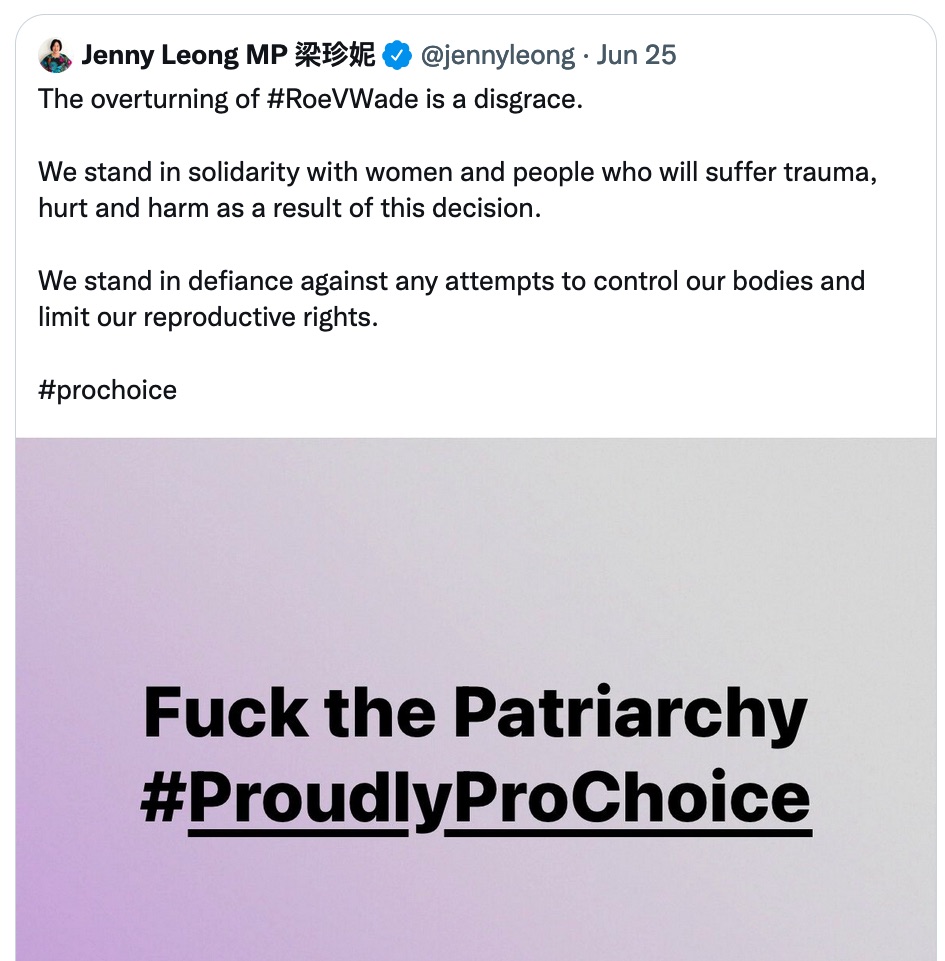 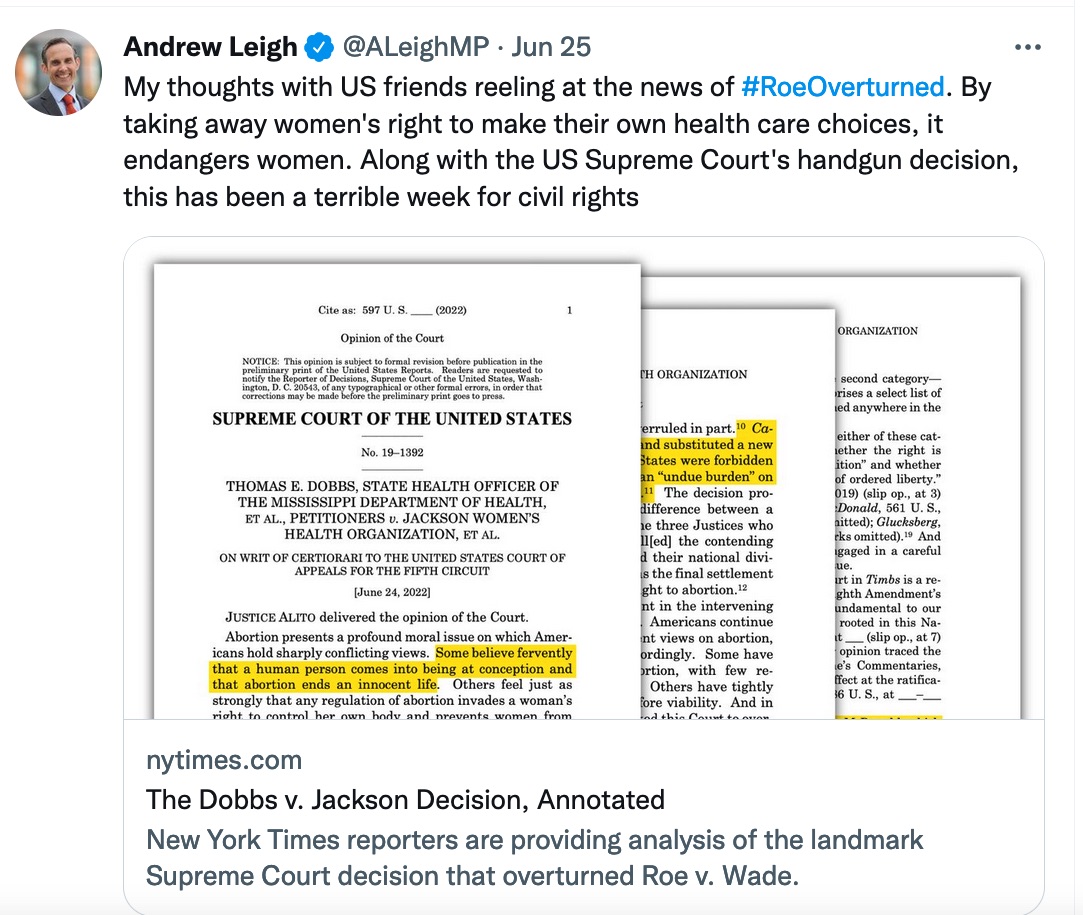 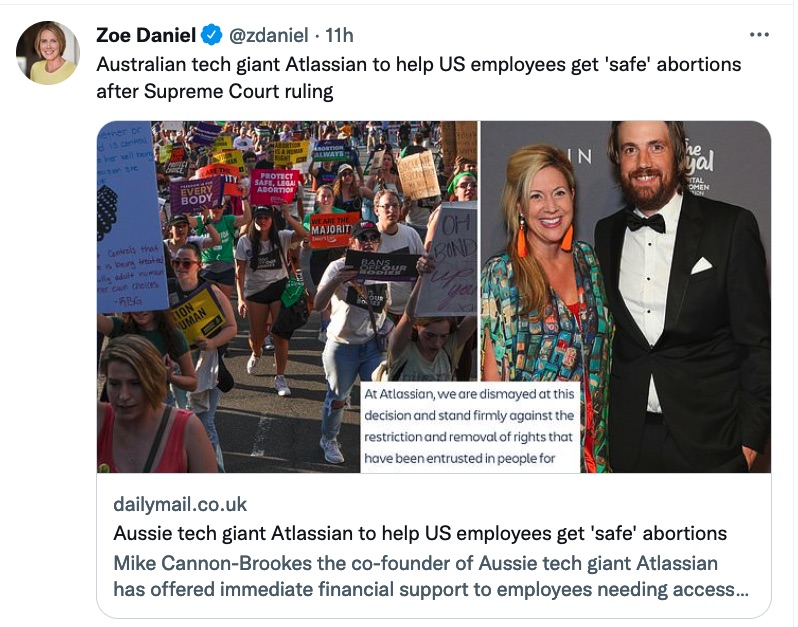 See Croakey’s archive of stories on human rights and health