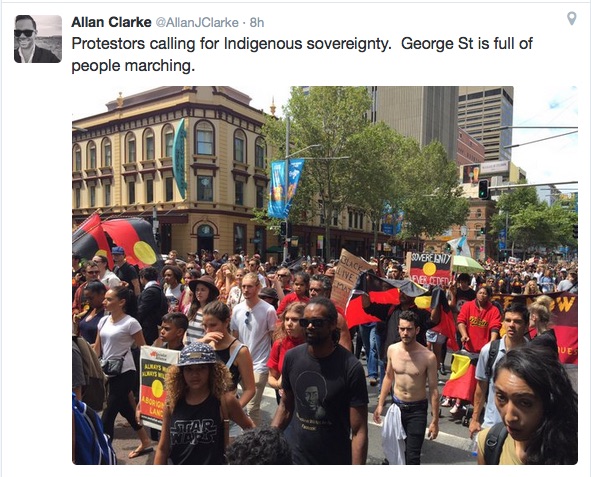 Health concerns and the 26th of January

For those with a concern for the community’s health, the 26th of January offers many opportunities for reflection.

The voices of Aboriginal and Torres Strait Islander people came across loud and strong at marches and events around the country marking Invasion Day, Survival Day and Day of Mourning, as well as on social media – as indicated by a selection of tweets below. 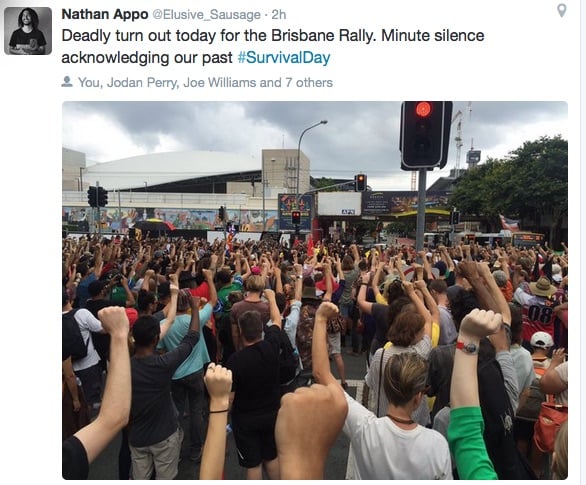 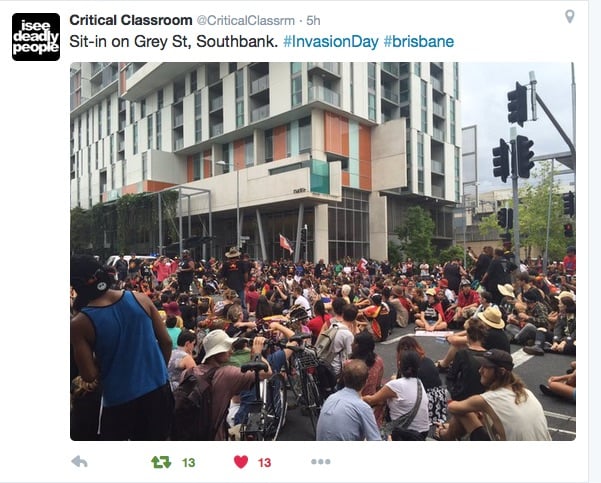 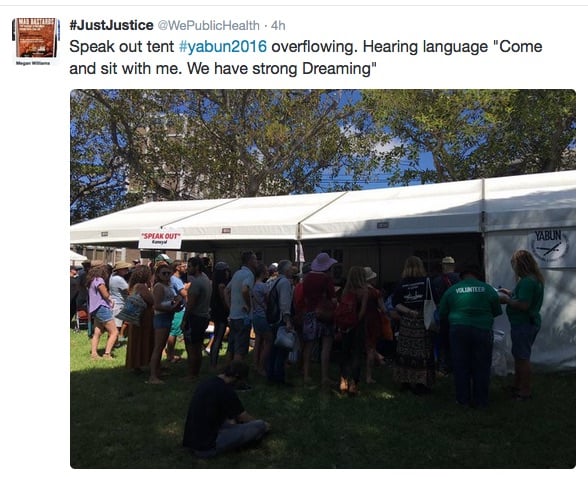 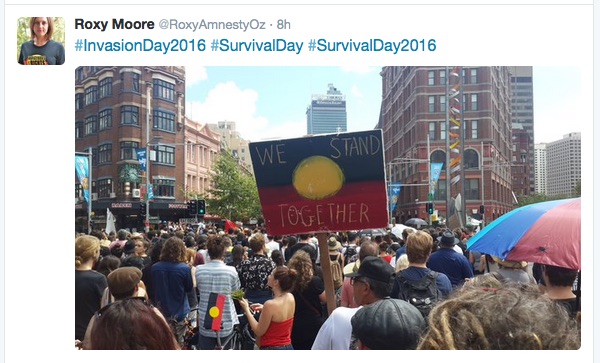 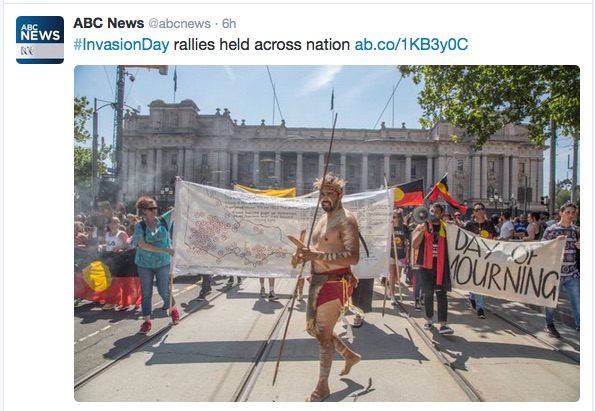 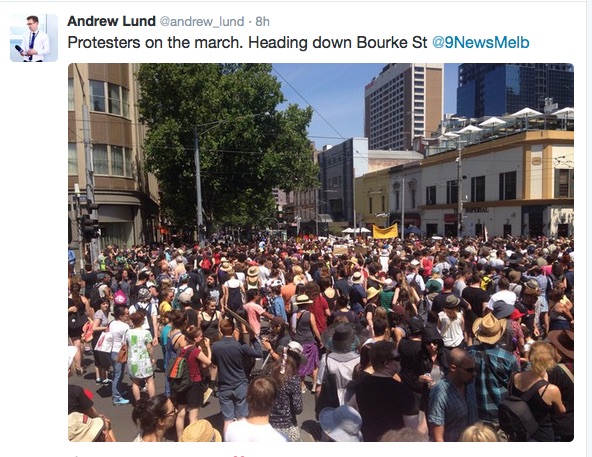 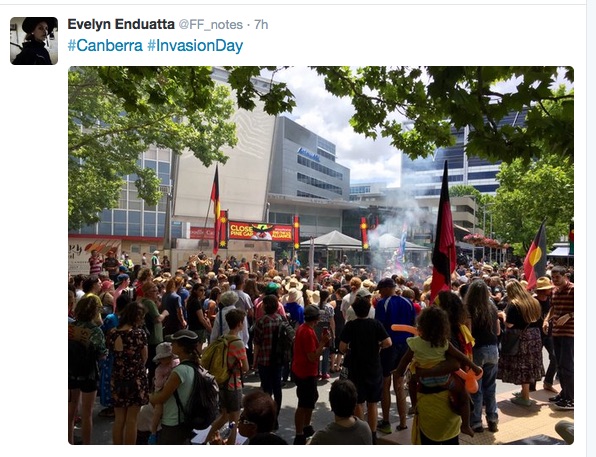 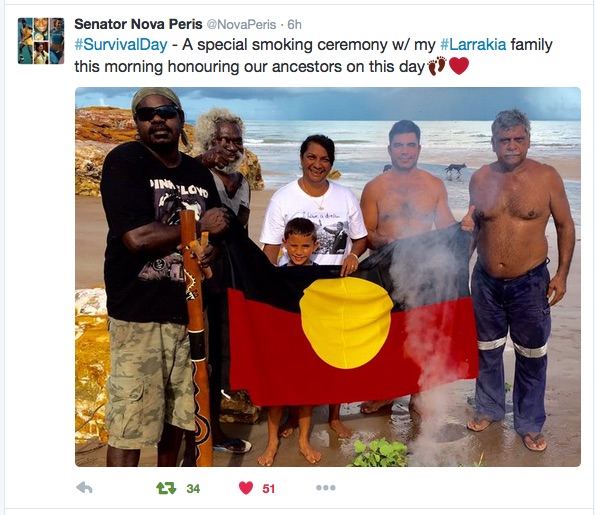 A powerful story of respect for country and traditional owners unfolded in response to this tweet sent out by Wiradjuri author Dr Anita Heiss.

A small selection of the many responses is below; check Anita’s Twitter feed for full details. 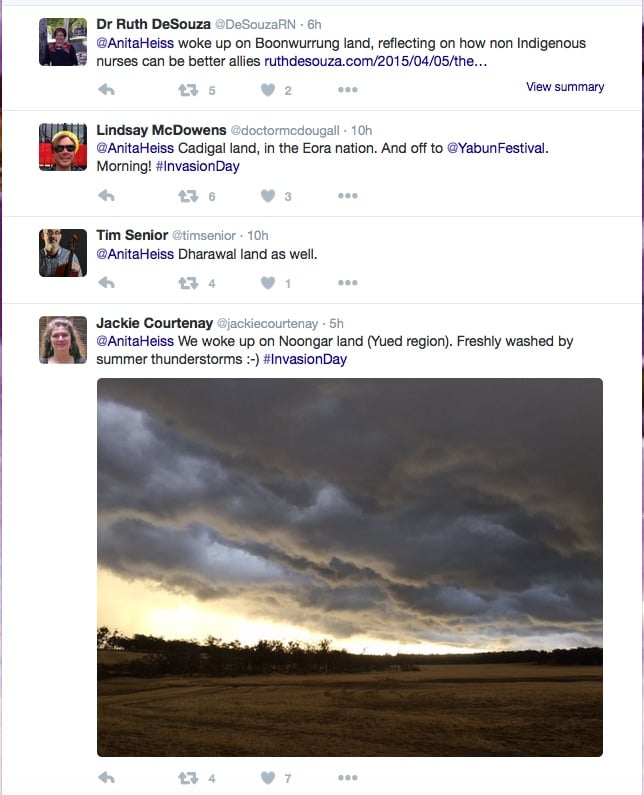 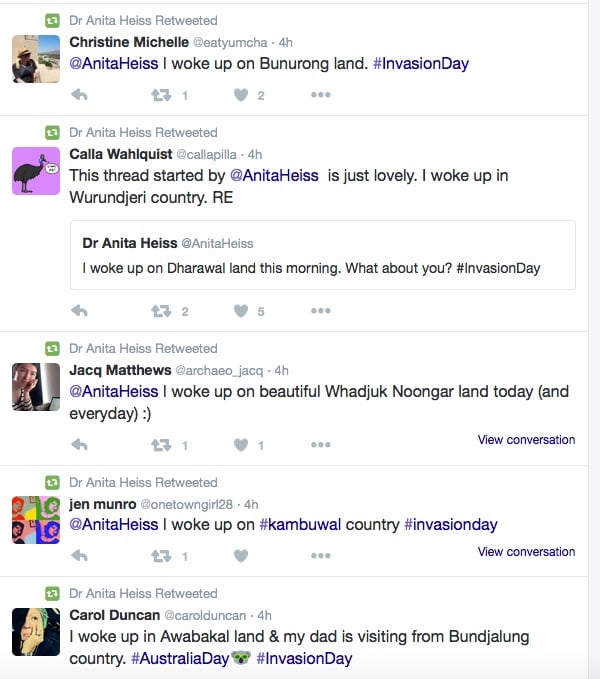 For health professionals wanting to improve the cultural safety of their organisation, service and practice, there is much to be learnt from following the Twitter threads of #SurvivalDay and #InvasionDay.

At a distressing time of the year for Aboriginal and Torres Strait Islander people, the health sector can exacerbate the hurt, as shown in this article by Colleen Lavelle, who blogs about her experiences as a patient.

Meanwhile, many in the public health sector are cheering the awarding of Senior Australian of the Year to Sydney specialist Professor Gordian Fulde, who for some decades has been an outstanding advocate for public health measures to reduce the alcohol toll.

Here you can watch responses from some of his colleagues, and the NSW Health Minister.

In his acceptance speech, Fulde asked us all to increase our “regard and respect” for other human beings. Read more here.

Thanks to the UNSW Newsroom for allowing cross-publication of the article below, profiling Fulde. 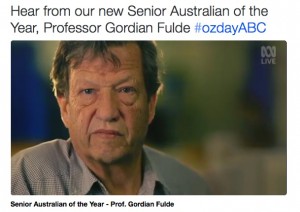 After 30 years on the frontlines of one of Australia’s busiest emergency rooms, UNSW Associate Professor Gordian Fulde is something of a household name.

The star of hit reality series Kings Cross ER, Fulde is also an outspoken advocate on the social issues that see his waiting room overflow, weekend after weekend: Mental health and homelessness, drugs and alcohol, a casual violence that would have been unthinkable three decades ago.

But behind every sensational headline and political point scored, there is a human face, and Fulde, who on Monday was named Senior Australian of the Year for his ongoing contribution to the community, has seen them all.

“We have the most rich, most powerful people sometimes even in the world, and at the same time the most socially powerless and disenfranchised,” says Fulde, Director of Emergency at St Vincent’s Hospital and a conjoint associate professor at UNSW.

“They can be in one bed to the next and it’s absolutely brilliant. And we treat them all the same.”

If there’s a new recreational drug, chances are we will see it first. If there is a trend in heart attacks, kidney stones, pneumonia, or whatever, we’re the first to sense something’s not right.

Fulde knew from “well before the age of 10” that he wanted to follow his German-born parents into medicine. His father was a cardiothoracic surgeon and his mother a pathologist.

After training at the University of Sydney, Fulde went into general surgery where, as fate would have it, he took a job at Sutherland Hospital requiring him to also oversee the emergency department (ED), known back then as casualty or ‘cas’.

“Traditionally, emergency was the pits,” he says. “In terms of appeal, it was up there with the toilets and roach motels.”

There was no triage system, no career path, nothing. The bells and whistles of modern emergency medicine were little more than science fiction.

Yet Fulde found himself falling under the ED’s spell, spending less and less time in the operating theatre until eventually, he decided to put the scalpel down.

“My mother never forgave me, but I knew I’d found what I really wanted to do.”

When the very first emergency medicine exams were held in the UK, Fulde was the third person in the world to sign up – and the first to pass.

He’s long been a “St Vincent’s boy” – his father had ties to the hospital and a young Fulde did his internship there. In 1982, he was appointed the hospital’s Director of Emergency.

A pioneer of the field, Fulde went on to found the Australasian College of Emergency Medicine, cementing its place as a standalone specialty.

“I am the only person standing, let alone working, from that era,” says Fulde.

“It was a significant thing, a pretty cool thing to have been a part of. And I’m still here.”

Every morning at 8 o’clock – even on the days he is not rostered on the floor – Fulde leads ward rounds, receiving a handover from overnight staff on the patients who occupy the ED’s 50 or so beds.

This particular Monday there’s the full spectrum: facial fractures from weekend assaults, a pedestrian hit by a car, UTIs and appendicitis, an international rugby player with heart trouble. In one of the padded isolation rooms, someone is coming down from an ice binge.

Someone thinks you have stolen their parking spot and they will scratch your car, or punch your head in. Thirty years ago, that was unthinkable. Now women get assaulted, and no one is surprised.

A middle-aged commuter cyclist is wheeled in on an ambulance gurney clutching what Fulde refers to as the Green Trumpet – a whistle containing the inhalable painkiller penthrox. His collarbone is visibly deformed, and later scans reveal broken ribs and internal injuries.

“It’s not fair is it?” Fulde says to the man as he is whisked past.

“Not at my age” replies the cyclist with a wan smile.

Straddling the outskirts of the CBD and Sydney’s red light district, St Vincents’ ED is the canary in the coalmine, says Fulde. As central Sydney’s trauma centre, it sees more misadventure than many other emergency departments.

Located in Darlinghurst, on the road to Kings Cross, it also has a reputation for “sex drugs and rock ‘n’ roll, perhaps unfairly, given the lion’s share of work is with the sick and elderly.

In the 1980s and ’90s, the hospital was on the front lines of Sydney’s AIDS epidemic, and more recently was designated the city’s SARS responder. It is fully equipped for a natural disaster or extremist attack. During the Lindt café siege Fulde’s teams were on standby to receive the first wave of victims.

“If there’s a new recreational drug, chances are we will see it first. If there is a trend in heart attacks, kidney stones, pneumonia, or whatever, we’re the first to sense something’s not right.”

Though use of the stimulant drug ice gets a lot of media and political attention, Fulde says alcohol remains the number one culprit in substance-related emergency presentations.

But a new culture of violence is what troubles Fulde most.

“Someone thinks you have stolen their parking spot and they will scratch your car, or punch your head in,” he says. “Thirty years ago, that was unthinkable – I had nuns walking around. Now women get assaulted,  and no one is surprised.”

As soon as Fulde finishes with one patient, another arrives. Emergency medicine moves at frenetic pace, with minutes or even seconds crucial to a successful outcome. Fulde typically does 10 things simultaneously and at speed, often forgetting to eat breakfast or lunch. He says emergency is not for everybody.

“You have to be a people person, and really cope with anything that’s thrown at you,” he says.

Burnout is a real concern, and the stress and shift work can end in divorce, drinking or worse.

Patients who leave home thinking today will be like any other day can, and do, die, leaving Fulde with grieving families who never had a chance to say goodbye.

“There is no real training that will help you … And that’s the really horrible part,” he says.

Every emergency physician has their triggers and coping mechanisms. As a father of two daughters, Fulde would go home after treating a young female patient and hug his children extra tight.

“Has it made me say live every day to the fullest? No. It comes down to your philosophy of fate, or religion, or superstition,” he says.

“The key is to appreciate what you’ve got – love, your family – that can really sustain you.”

Fulde’s wife of more than 30 years, medical administrator Lesley Forster, is the head of the UNSW Rural Clinical School. He credits her with teaching him how to navigate the pot-holed world of hospital politics, which continues to be a family affair – both their daughters are also UNSW-trained doctors at St Vincents.

Perhaps surprisingly, Fulde says the memories that stay with you aren’t necessarily the most dramatic ones.

The stakes can be high, but so too the rewards. There are few areas of medicine where you can make such a profound difference to nearly everyone you see.

“Those people who die in front of your eyes, who you form a human relationship with, they stay with you. As they should.”

The stakes can be high, but so too the rewards. There are few areas of medicine where you can make such a profound difference to nearly everyone you see, Fulde says.

And it’s not all about life and death. Fulde says he’s constantly amazed by the sexual misadventures that present to the ED.

“We routinely see the most unbelievable stuff, even my most seasoned staff say ‘wow, this is different’,” he says. But he immediately evokes the Vegas clause: what happens in the ED stays in the ED.

Fulde’s mantra is a simple one: Prime Minister or pauper, you are first and foremost a patient. It’s a pragmatism that has won him friends in all quarters.

“You treat everybody the same, as though they were a loved one, and you play everybody down the wicket,” he says.” I’ve got no axe to grind.”

By contrast – read Professor Mike Daube’s comments on the “UK Australian of the Year” award to Lynton Crosby: “an embarrassment and a disgrace”.

Search here for more details on the Australia Day Honours list. As you can see below, Paul McNamara has identified the nurses on the list. 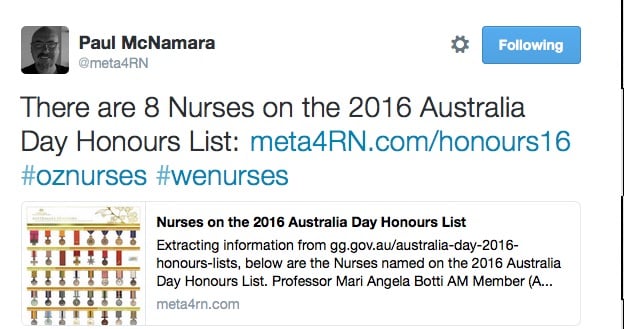 PrevPreviousMeet “the perfect town”, taking an historic step towards a fairer community
NextBehind the headlines: some useful links and background on Zika virusNext