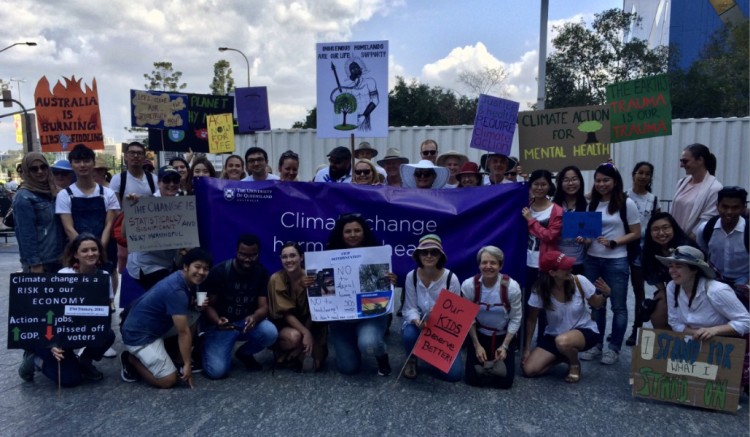 Introduction by Croakey: Health groups are calling on candidates in Saturday’s Queensland election to commit to urgent action on climate change, warning that the state could find itself this summer having to evacuate citizens from flooded regions post-cyclone, in heatwave conditions, and during a pandemic.

The Queensland Election Briefing: Climate Change, Health and Wellbeing: opportunities to boost resilience has been signed by the Climate and Health Alliance, Public Health Association of Australia Queensland Branch, Queensland Aboriginal and Islander Health Council, Social Workers for Climate Action and Doctors for the Environment Australia.

Released on Wednesday, it calls on the Queensland Government and all election candidates to support:

All of these health promoting actions will also create jobs, support the post-COVID recovery, and boost Queensland’s climate readiness, it says.

The briefing applauds the current Labor government’s “commendable first steps towards building climate resilience in the state’s health and wellbeing system”, including its Human Health and Wellbeing Climate Change Adaptation Plan (H-CAP), noting that many of the priorities above could be met by increased funds for H-CAP Priority Adaptation Measures.

It also welcomes the Health Minister’s recent commitment for $50 million for solar panels on hospitals and to establish a new Office of Hospital Sustainability within the Health Department.

Supporting the briefing, Professor Hilary Bambrick, Head of School, Public Health and Social Work at Queensland University of Technology, said Queensland needed to see from government the same decisive action on climate change as had been delivered to prevent the worst of the COVID-19 pandemic.

“Despite our attention being diverted this year by the pandemic, we must remember that 2020 started with our eastern seaboard on fire, and climate change is still continuing,” Bambrick said.

“Without urgent and meaningful reductions in emissions, the supercharged climate conditions behind Black Summer will continue to drive increasingly extreme events that are dangerous to our health for decades to come.”

In the article below, Associate Professor Linda Selvey and PHAA Queensland president Letitia Del Fabbro say the state poll should have been a watershed moment on climate action for Queensland.

Instead they say, despite devastating natural disasters over decades including last year’s ferocious bushfires, it is more of the same, with little attention to the crisis that is climate change globally and for the state, and ongoing support for policies that contribute to the increasingly dire problem.

This is the second in a series of #QldVotesHealth articles led by the Queensland branch of the Public Health Association of Australia (PHAA) here. The first article is here.

In other related news, Guardian Australia reported on Wednesday that Queensland voters are being subjected to a barrage of anti-Labor adverts from mining boss Clive Palmer’s United Australia party and text messages from his mining company Mineralogy, and that new analysis shows Australia’s industrial greenhouse gas emissions are projected to increase by 77% between 2005 and 2030, the period over which the Coalition has promised to cut national carbon pollution.

The ABC also provides analysis of where the major parties stand on key issues, including renewable energy, elective surgery waiting lists, family violence, the digital divide, child safety and youth unemployment, as well as this outline of the minor parties involved in the election.

Headlines have predicted that coal mines and climate change will — rightly, critically — be hot topics during the campaign ahead of this Saturday’s Queensland election.

Yet in fact the state’s main political parties continue to ignore the gravity of prevailing environmental issues, first and foremost the drastic need for carbon emission reduction.

While the Opposition Liberal National Party has committed to ensuring that Queensland makes its contribution to our woefully inadequate Paris Agreement targets, they are light on the details with how this will happen, beyond a massive hydro-electric scheme that will be disastrous for our natural environment.

They also have committed to reviewing the Native Vegetation Act that will also mean more emissions from land clearing.

The governing Labor Party is fairly strong on renewable energy but they are proud of their recent record in approving a number of new coal mines in Queensland.

Overall, promises in relation to climate change are thin on the ground, apart from The Greens.

Such policies highlight a key contradiction of our age and provide insights into the perceived electoral divide in Queensland — this recent article, exploring coal mines and Queensland voting in the 2019 federal election, warns that “simplistic binaries of acting to ameliorate climate change versus supporting the fossil fuel industry fail to account for the complexity of Australians’ views on coal mining and carbon emissions.”

In recent decades Queensland has borne the brunt of climate change impacts including the endurance of hazardous bushfires and devastating floods.

The 2019 Queensland bushfires were catastrophic with more than 7 million hectares burnt across the state. These impacts are destabilsing for all, impacting the capacity for communities to go about their lives and causing enormous human, environmental, and financial cost.

For example, the extensive fires in Queensland and Northern New South Wales in November 2019 alone were estimated by the Insurance Council of Australia to cost $145 million.

Australian non-arid regions are increasingly prone to bushfire, and bushfire seasons are starting earlier and earlier. Issues such as dangerous smoke levels can be harmful and life limiting to many people with otherwise manageable conditions (e.g. asthma).

There should not be a disconnect between the environmental damage that we cause in our backyards and the hazardous and life limiting bushfire smoke that is a result of this damage.

Overall these climate events and climate change impacts pose the most threat to our high risk and vulnerable populations, those that we should be seeking to support and protect.

The terrible spring and summer bushfires we experienced in 2019/2020 and their consequent health impacts are an indication of what is to come.

Currently the level of CO2 in our atmosphere (414 ppm and rising) is at unprecedented levels for humanity. The IPCC report on 1.5oC was clear. 1.5oC will not be pretty but 2oC will be far worse.

In spite of this, both major parties in the Queensland election support initiatives that will contribute to the climate crisis.

The  Labor Government has approved a long list of large resource projects,  and recently approved a mega metallurgical coal mine in Central Queensland. It also announced a royalty deal for the Adani Carmichael coal mine, significant not just because of the mine itself but also because it will open up the Carmichael coal basin for other mines.

From the LNP’s policy platform it is clear that they support both of these mines, and more. Coal mining is also very water-hungry, and allowing the extraction of huge amounts of ground water at a time when water security is threatened by the climate crisis does not bode well for our future.

Australia needs a more resilient and inclusive economy.  We need to find ways for mining dependent communities to transition to innovative and diverse jobs.  Australia is ranked the third largest exporter of fossil fuels behind Russia and Saudi Arabia and we are at risk of becoming an international pariah for not keeping pace with commitments to international greenhouse gas emission targets.

While Queensland has a Health and Wellbeing Climate Adaptation Plan, there are limits to adaptation. We must play a greater role in mitigation.

Our health services are an important place to start. Our vast resources of sun and wind also mean that Queensland can be a world leader in renewables technology. Instead of building more roads, we can be building more infrastructure for public and active transport, reducing air pollution, traffic injury and increasing opportunities for physical activity.

This election should have been a watershed moment for Queensland, given the challenges that we face. Instead it is more of the same. Sadly, we know that that will mean for our health and our climate.

Linda Selvey is Associate Professor in the Division of Planetary Health and Health Protection in the School of Public Health at The University of Queensland and a member of the Public Health Association of Australia.  Follow on twitter: @laselvey

Letitia Del Fabbro is Qld Branch President of the Public Health Association of Australia, a PhD candidate with The Hopkins Centre: Research for Rehabilitation and Resilience and a Lecturer in Nursing at Griffith University.
Follow on Twitter: @letitia_df  and the PHAA Queensland branch: @PHAAQldbranch

PrevPreviousOf all the places that have seen off a second coronavirus wave, only Vietnam and Hong Kong have done as well as Victorians
NextDeath toll of global healthcare safety lapses tops burden of malaria, TB, and diabetesNext