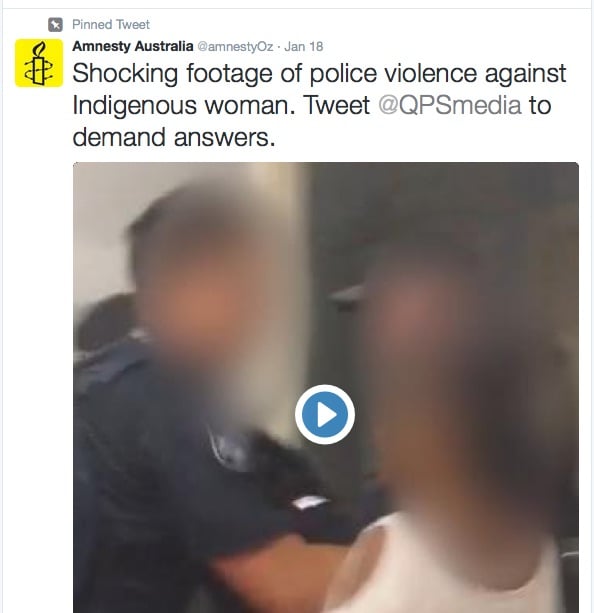 The push for health in all policies should have a big focus on addressing the impact of police practices on the health and wellbeing of Aboriginal and Torres Strait Islander peoples.

It is noteworthy that health groups, including the Menzies School of Health Research, the Secretariat of National Aboriginal and Torres Strait Islander Child Care, and the Victorian Aboriginal Community Controlled Health Organisation are among signatories to the open letter reproduced below. It is also noteworthy that many health organisations have not signed the letter.

It would be interesting to see an analysis of how much health research funding and public health muscle is devoted to this area more broadly.

We the undersigned organisations are deeply concerned by the treatment of an Aboriginal woman by the Queensland Police Service in video footage which emerged over the weekend.

The video appears to show a male officer responding with excessive physical force towards an Aboriginal woman, including repeatedly shoving her as she attempted to get closer to her teenage son. There also appears to be conflicting reports as to the basis for the police entering the home and what they were responding to.

Effective policing relies on having the trust of the community. For Aboriginal and Torres Strait Islander communities, well-documented contemporary and historical factors including racism and deaths in custody have contributed to low levels of trust in the police. This negative relationship hinders the ability to build positive relationships between the community and police, and also impedes the ability of Aboriginal and Torres Strait Islander people to access their rights under the law.

The undersigned organisations are seeking:

 an independent investigation as to why such force was used towards an Aboriginal mother and on what basis the police were in the home;

 an assurance that policies and practices are put in place to ensure police do not use excessive force, particularly force which adds to the unacceptable levels of violence experienced by Aboriginal and Torres Strait Islander women; and

 the development and implementation of strategies which are aimed at building stronger collaborative relationships between police and Aboriginal and Torres Strait Islander communities, organisations and their representative bodies. These strategies should improve police interaction with the community and build the capacity of police to respond to family violence, mental health issues and other complex situations, in a culturally safe way.

This open letter is supported by the following organisations:

PrevPreviousSystematic Reviews: why do they lack policy relevance?
NextInfluencing the Turnbull Government – Part 2Next