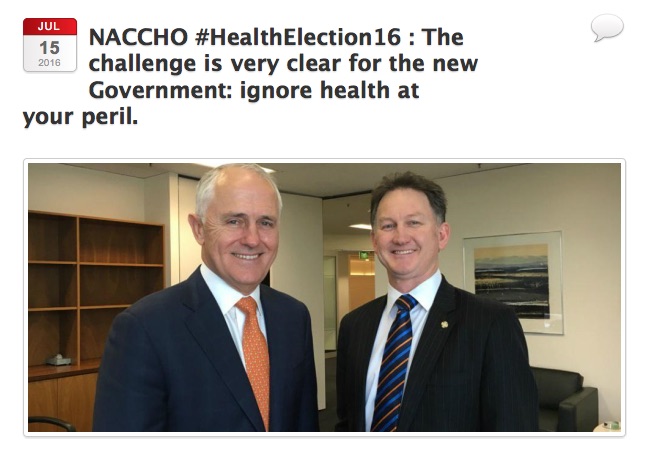 In a radio interview this morning, the new AMA president, Dr Michael Gannon, appeared to open the door to supporting further discussions about a GP co-payment, although he later issued this tweet.

Meanwhile, a coalition of health groups has put out this statement opposing the suggestion in the strongest possible terms. (It’s not a good look for the AMA.)

While a government spokesperson says the Government has no intention of pursuing a co-payment, the Prime Minister and the Health Minister must come out and dismiss the idea once and for all.

Medicare is a key pillar of Australia’s universal healthcare system – it is not a safety net. Consumers must be at the centre of any health policy reforms.

“GPs should not be in the position of making judgement calls about their patients’ finances. Co-payments impact affordability of care and emergency department use, and were rightly abandoned,” she said.

“While general practice must be well supported, the AMA has a vested interest in protecting its members’ income. Our focus is universal healthcare for all Australians regardless of where they live or how much money they earn.”

“Instead of resurrecting the co-payment, the Commonwealth Government should focus on a holistic, long-term vision for healthcare with appropriate funding commitments to support primary, acute, aged and disability care, to ensure all Australians can access quality care regardless of their income or where they live.”

PHAA CEO Michael Moore was shocked at a suggestion the Coalition might undermine Medicare.

“It would be incomprehensible that the Coalition has missed such clear messaging from the community. Any action to undermine Medicare is simply unacceptable. This was the real nub of the debate at the election and the issue that confronted Tony Abbott’s government when he and Joe Hockey introduced the concept of a compulsory co-payment,” he said.

“At a time when other countries are working towards ‘health for all’, the last thing we need in Australia is a government seeking to undermine basic human rights – the right to health and the equitable right to treatment. Medicare is about a fair go for all Australians. When this is properly understood all members of Parliament, as fair dinkum Australians, have an obligation to protect and enhance our system of universal healthcare”.

CHF CEO Leanne Wells said the government’s priority needed to be the development of a national health plan and moving to the “next stage” of Medicare based on sound policy.

“People are already hurting: Australians already face some of the highest out-of-pockets costs for their healthcare compared to other, equally wealthy OCED economies. The message from the electorate is that GP co-payments would be a financial burden that affects the community’s most vulnerable, first and foremost. “After over a decade of reviews, we don’t want to see status quo for the next three years. We want Medicare reform but it must be based on a wider debate about a national health care plan that puts patients first, and a new narrative that gets us back on to setting the health agenda based on good policy principles,” Ms Wells said.

NACCHO remains totally opposed to Medicare co-payments of any kind, according to CEO Pat Turner.

“NACCHO will fight any proposal to introduce changes or co-payments to Medicare tooth and nail. Aboriginal and Torres Strait islander communities are the most disadvantaged economically in Australia, and bear the burden of higher levels of chronic health conditions and lower life expectancy.”

“Aboriginal medical services are doing everything they can to close the gap in Aboriginal health and in many areas we are beginning to make inroads, despite chronic underfunding.”

“Any co-payment at all will undo that work. Quite simply, if people cannot afford to go to the doctor, they will not go. Healthcare is a basic human right, however much money you have, however sick you are and Australia must abide by that principle.”

ACOSS CEO Dr Cassandra Goldie said: “Health care should be available to all who need it regardless of income and a Medicare co-payment undermines that principle.”

“The best way to pay for an essential service like health care is through the tax system. The best way to ensure its sustainability is to reform the way governments purchase health services – for example by reducing spending on inefficient subsidies like the private health insurance rebate – not by shifting the cost to people who need health care.