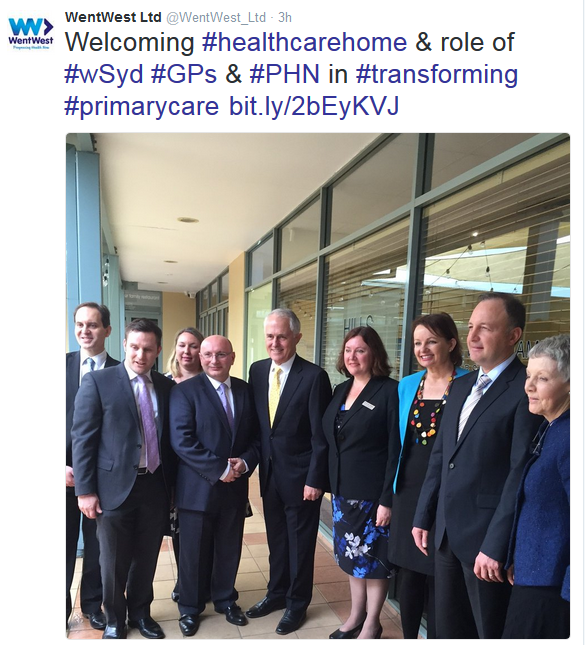 The Federal Government today announced the ten regions across the country that will participate in its Health Care Homes trial.

Prime Minister Malcolm Turnbull joined Health Minister Sussan Ley for the announcement of the program’s trial sites at Western Sydney Primary Health Network, saying the Federal Government was investing nearly $120 million in this ‘first stage’, including over $90 million in payments to support patient care and $21 million for infrastructure, training and evaluation. .

Croakey has previously  reported  on general support across the sector for the principle of health care homes amid some stakeholder concerns  about their implementation.

Those concerns continued today as health organisations welcomed the latest announcement but warned that funding appeared substantially inadequate and could put at risk the trial and concept. See their statements below.

Minister Ley announced the latest details of the trial today in this statement, saying Health Care Homes is “a better way of delivering Medicare for Australians with chronic illness.” She said:

“It will give Australians a local health care team – led by their GP – that they can trust to coordinate their health care needs throughout the year to ensure patients remain happy, healthy and out-of-hospital.

It will allow doctors and their teams to focus on delivering quality improvements to patient care when they need it, no matter how often it’s needed, without the rigid constraints of Medicare’s current fee-for-service model.”

Ley said the first stage of the roll out would initially benefit up to 65,000 patients across 200 GP clinics and Aboriginal Medical Services Australia-wide and will be evaluated to enable refinements to the model prior to a national roll-out.

The Australian Healthcare and Hospitals Association (AHHA) welcomed the Government’s commitment to Health Care Homes but warned that funding for the trial looks set to “fall substantially short of requirements”.

“The establishment of Health Care Homes is a step in the right direction to resolving fragmented primary and acute care services for people with chronic conditions, but it will be important to get the funding balance right so that incentives promote value, not volume of services.

Evidence from a number of sources suggests that funding of between $1300 and $2500 per person per annum would be required to truly deliver reform via a Health Care Home. There is much to be learned from previous coordinated care trials both in Australia and internationally about appropriate funding and incentives to promote quality care over volume.

“The Health Care Homes package must be more than a one-size-fits-all approach. Chronic care reforms must be flexible, patient-centred and integrated with other reforms throughout the broader health sector, including the acute sector, and designed in partnership with the states and territories. Such initiatives have been shown to be most effective when primary care based population approaches are taken.

Verhoeven said the trials would underscore the need for better primary health data and greater use of the My Health Record to support the design, implementation and evaluation of the reform. She said:

This requires the support of general practice, and national health statistics leadership to build a national minimum data set for primary care. This must be shaped as a national data asset, not by commercial or niche sector interests.

“The data gathered by this trial must be used to launch Health Care Homes as a fully-resourced, integrated care program at the PHN level, aimed at improving the lives and health outcomes of Australians with chronic or complex conditions.”

Welcoming the announcement, the Australian Medical Association said Health Care Homes is “potentially one of the biggest reforms to Medicare in decades” but also warned that GPs must be properly resourced and supported to make both the trial and the concept a success

“The reality is that GPs cannot afford to deliver enhanced care to patients with no extra support.:

“There is no new funding for the Health Care Homes trial. Money has been shifted from other areas of the health budget.

“If the Health Care Homes funding model is not right, GPs will not engage with the trial, and the model will struggle to succeed.

“We urge the Government to provide new funding and resources for the trial, and lift the Medicare freeze and other burdens from GPs, in order to give this exciting primary care reform every chance of success.”

The Rural Doctors Association of Australia (RDAA) also welcomed the announcement but warned the trial must be genuine and must prove that Health Care Homes can work well for rural and remote patients.

RDAA Vice President Dr John Hall observed that the language around the trial had changed from being a ‘trial phase’ to now being ‘stage 1’. He said:

“It is great to see the Government progressing the Health Care Homes trial, and announcing the Primary Health Network regions that will be part of this.

“It is critical that this remains a genuine trial of the Health Care Homes model, to ensure it really works in improving access to chronic care and improving patient outcomes — particularly in the bush.

“If we are to accurately ensure that the Health Care Homes model is going to work for those patients with chronic conditions living in small rural and remote towns, we must ensure that practices and health services in these towns form at least 50 per cent of the total number of sites chosen to be trialled.

Hall said the financial support behind the trial sites also needs to be realistic.

Consumers Health Forum of Australia CEO Leanne Wells tweeted a link to this report on the ‘critical ingredients’ for successful implementation of the health care home model.

In a statement, she said the Turnbull Government’s aim to strengthen Medicare through the Health Care Homes model is good news but will need strong clinical leadership and patient confidence and engagement in design and delivery if it is to attract patient support. She said:

““The reform opens an opportunity to strengthen Medicare by getting the balance of health investments right with more emphasis on primary health care.  The evidence is that strongly performing health systems have a solid primary health care backbone

“At the moment we are seeing a somewhat scattered approach, with some federally financed pilot programs while separately some Primary Health Networks are also commissioning joined-up care services.

“The stage one plan is to attract 65,000 patients in 200 GP clinics.  Both patients and doctors will need to be convinced there is more support being offered to focus on the overall needs of chronic patient care.

“The $21 million funding allocated for this stage one of Health Care Homes (HCH) is about one-hundredth of Medicare’s current expenditure.   A further $90 million in payments to support patient care is a redirection of money from existing Medicare payments to GPs.”

Wells said state and territory health agencies and some of the Primary Health Networks have already started working with general practices in their regions to develop new models and ways of working.

“That work should be used to inform the development of an effective chronic care system.

“HCH needs to be part of that process – not as a separate “silo” which does not have strong connections to the rest of the system.”

WentWest, the Western Sydney Primary Health Network welcomed the news that it had been selected as one of the 10 regions, saying it was “an unprecedented opportunity to redefine primary care and influence system enhancement.”

It said that WentWest CEO Walter Kmet and local GP, Dr Kean Seng Lim of Mount Druitt Medical Centre have both been appointed to two key national committees advising Government on the implementation.

The Pharmaceutical Society of Australia (PSA) said it is committed to working with the Health Care Homes Implementation Advisory Group and the Government to co-design a HCH model for the Australian context, which is based on best practice, evidence-based models of care to ensure consumers receive maximum benefit.

It has previously said including a pharmacist in the HCH team has the potential to reduce polypharmacy, potentially preventable medication-related hospital admissions and readmissions, leading to a reduction of overall primary care expenditure and significant savings to the broader health sector.

“There is evidence supporting the benefits of the HCH and the models in which significant benefits have been demonstrated to employ multidisciplinary care teams led by GPs, but also to use an expanded model where pharmacists may assume greater collaborative care roles.

Pharmacists are well placed to contribute to the HCH trials and optimise medication schedules and increasing medicines safety to improve the health outcomes for patients with chronic and complex conditions, particularly during critical periods of care transition.”