Much of the public opposition to the WestConnex project is related to concerns about the impacts on health. Image via The Conversation, No WestConnex

WestConnex, the most expensive piece of transport infrastructure being built in Australia, looms large over the next New South Wales election. Construction is well under way, fuelling community concern about the project’s impact on their health and wellbeing.

The NSW Coalition government was elected in 2011 on a promise to deliver major infrastructure including a road for Sydney. Attention should have been paid to the adage that history repeats itself. The M5 East project became a major headache for the previous Labor administration because of concerns about the impact of tunnel emissions on human health.

Subsequent research showed some health concerns to be scientifically unclear. Nevertheless, WestConnex is showing that concerns about a range of human health issues, including but not limited to tunnels, remain at the forefront of public concern.

Read more: With health assuming its rightful place in planning, here are 3 key lessons from NSW

What do submissions to WestConnex inquiry tell us?

We wanted to test our assumption that health is a core issue for the public in relation to infrastructure projects. We asked two masters of public health students to investigate the content of the nearly 500 public submissions made to the current parliamentary inquiry into the impacts of WestConnex. Both randomly picked 150 submissions made by individuals, plus 70 from organisations or those with a professional interest in the project. They analysed these submissions for mentions of health and related themes.

The impact of Westconnex on health was one of the most consistent themes in submissions. Around three-quarters referred to “health”. About half of these did so explicitly and the other half identified a health concern but without using the word.

The majority focused on air quality. Many were concerned about children’s health – relating to both the proximity of schools to WestConnex works and the loss of green space and its impacts on physical activity. Submissions also raised issues of noise, traffic accidents, stress, reduced physical activity, sleep disturbance and odour, often in quite disturbing detail. 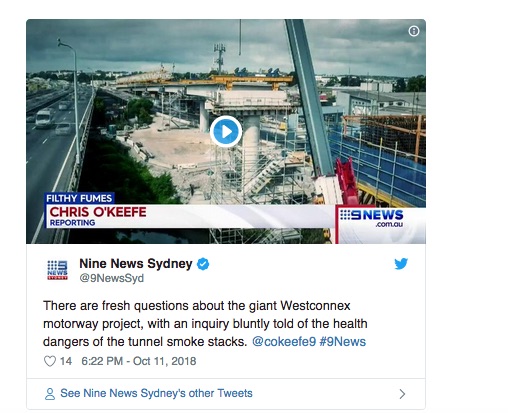 Crucially, many submissions showed evidence of independent health research – for example, on the difference between filtered and unfiltered stacks. They called for health outcomes to be measured and publicly accessible.

Read more: Why transport projects aren’t as good for your health as they could be

Health was missing from the start

Ultimately, these concerns about health result from misgivings and frustration about the transparency of decisions behind the project. Digging deeper, the 2015 updated business case demonstrates that the analysis over-relied on benefits and underestimated costs to find that WestConnex would be:

This is an example of a misuse of cost benefit analysis that, international research has shown, ultimately culminates in massive cost blowouts, overruns and impacts that are not in the public interest.

Read more: WestConnex audit offers another $17b lesson in how not to fund infrastructure

The focus on travel time savings omits health and related impacts raised in submissions. It ignores the required mix of transport options that are known to have a positive impact on community wellbeing.

This is made more problematic by the early planning never having been in the public domain. By the time the updated business case was produced in 2015, key decisions, which led to the motorway being proposed without any alternatives, had been made but are still not available for scrutiny. The details behind the original analysis that Infrastructure NSW undertook in 2012 are missing.

The original INSW state infrastructure strategy and woefully parsimonious 35-page report argue that “WestConnex must be more than a road”, but this objective appears to have gone missing in action soon after.

Read more: Transport access is good for new housing, but beware the pollution

Lessons from the WestConnex experience

It’s fair to say that the 2011 infrastructure commitments have come back to haunt the government. The unprecedented scale of investment has been coupled with unnecessary hubris. Planning processes appear for the most part to be serving vested interests rather than the public interest.

The opposition, smelling blood, is promising to make infrastructure planning decisions transparent if elected next year.

The WestConnex experience shows the political cost of marginalising health in such decision-making. Perhaps the biggest lesson is that the public may never be satisfied with technical predictions of risks late in the planning process.

Transport planning has the potential to improve the health and wellbeing of the population. With this in mind, it’s better, then, to include health across decisions about what type of project best fits the strategic goals of the city. This process should weigh up options and alternatives based on a balanced assessment of costs and benefits that places a value on human health.

Above all, we need transparency about these decisions. If not, governments will continue to suffer the consequences at the ballot box.

Thanks to Tom Robertson and Abigail McCarthy for their outstanding analysis of the inquiry submissions in their final major unit of the Masters of Public Health at the University of Sydney School of Public Health.